I took off to East Anglia today to see if the effusive praise dominating Twitter all day yesterday as the first Class 755 took to the tracks in public service on the Wherry Lines between Norwich and Great Yarmouth/Lowestoft was justified. 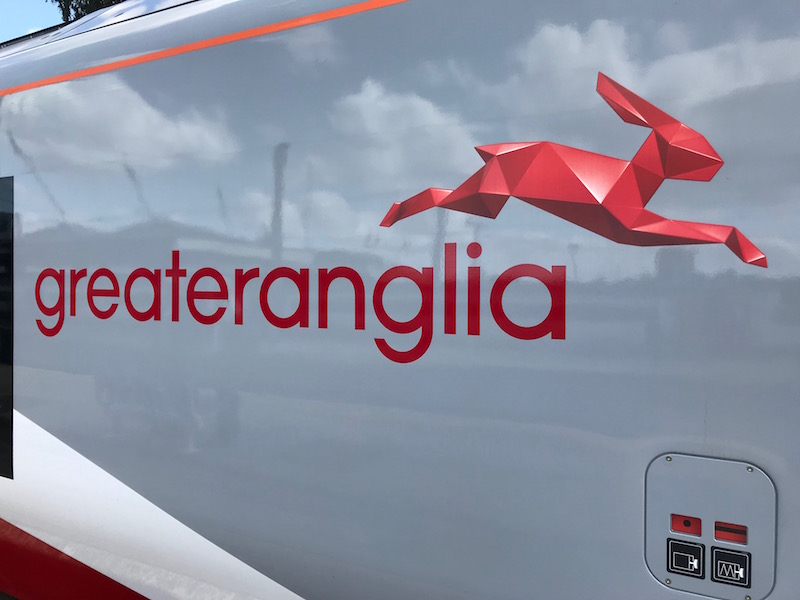 Until yesterday Greater Anglia had been operating a Class 37 loco hauled train on one set of Wherry Line workings and this is the first diagram to be upgraded to these swish new Class 755 trains.

Previously train enthusiasts would make a pilgrimage to Norwich to sample the throaty roar of a Class 37 locomotive’s engine; now their cameras are all over these smart new bi-mode trains with their amazingly quiet traction.

Today was a double bonus with part of the diagram’s afternoon schedule including a return trip to Lowestoft still Class 37 operated, so many of the camera wielders were straight off the Class 755 arrival from Great Yarmouth into Norwich’s platform 5 at 13:52 and over to platform 4 for the Class 37 14:05 departure to Lowestoft – which had just two coaches in between the two locomotives! 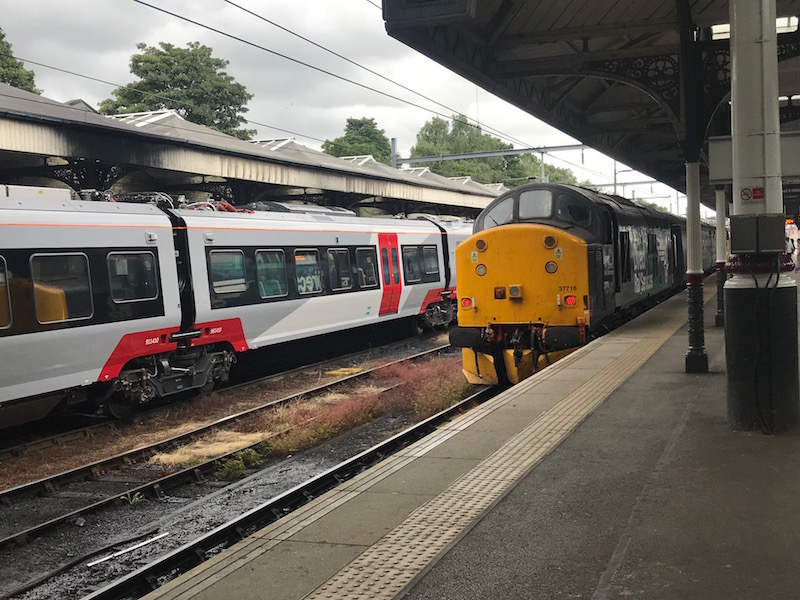 These lovely new Class 755 trains are built by the Swiss train manufacturer, Stadler, and are called FLIRT – which stands for ‘Fast Light Intercity (and) Regional Train’. Greater Anglia have ordered 38 to replace Class 153, 156 and 170 trains. Twenty-four sets have four coaches and the other fourteen are three coaches long. But they all also have a ‘power pack’ coach, which is just under a third the length of one of the passenger carrying coaches, where the ‘gubbins’ is housed.

The contractual entry into service for these trains, and the similar intercity Class 745 electric trains now being delivered, was Spring 2019 and it was hoped to run a set coincidental with the new timetable on 19th May on the ‘Norwich in 90’ launch. Just over two months late isn’t bad going these days for trains-into-service-missed-dates so that’s already one star awarded for timeliness. Roger Ford reported in this month’s Modern Railways magazine that thirteen of the Class 755 sets had been delivered and authorisation received from the Office of Rail and Road on 11th June with four of the longer twelve coach all electric Class 745s delivered and authorised. 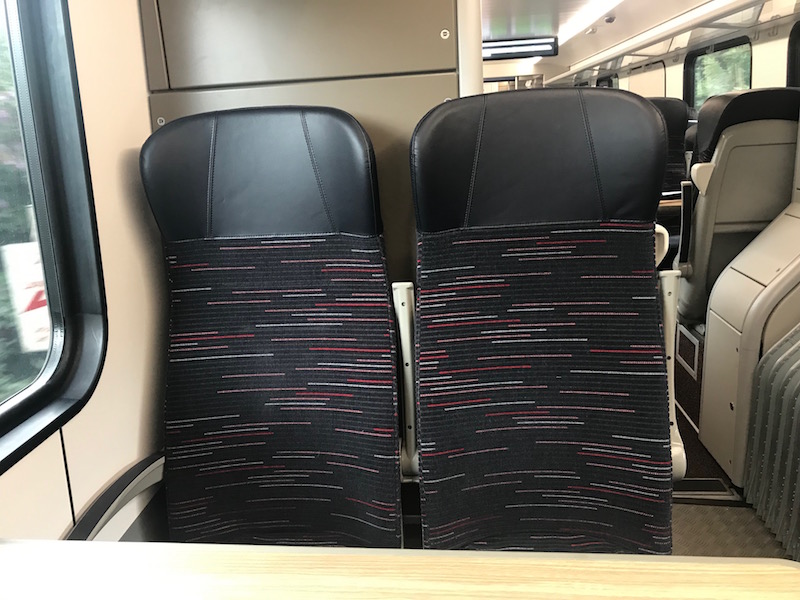 As I mentioned last time the most important thing for me is seats. Expectations for new train seat comfort are now so incredibly low that any modicum of agreeable bum-on-cushion experience immediately gets another star; that’s if train operating companies are allowed to use the word ‘cushion’ in these heightened fire retardant safety critical times. When ordering these trains a while back Greater Anglia boasted about the extra care they’d taken to specify seats which passengers would find comfortable. It comes to something when this is seen as a bonus to shout about; in the event I’d say they’re passable for the job in hand – much better than a Class 700 (Thameslink) for sure, but then that bar is set so incredibly low, it’s not saying much to pass it.

I like the ample width of the seats and this makes the gangway perceptively narrow and difficult to pass other passengers walking through. The seat cloth and it’s design appear smart and, as I found on Northern’s new trains, helps to make the seats more bearable. 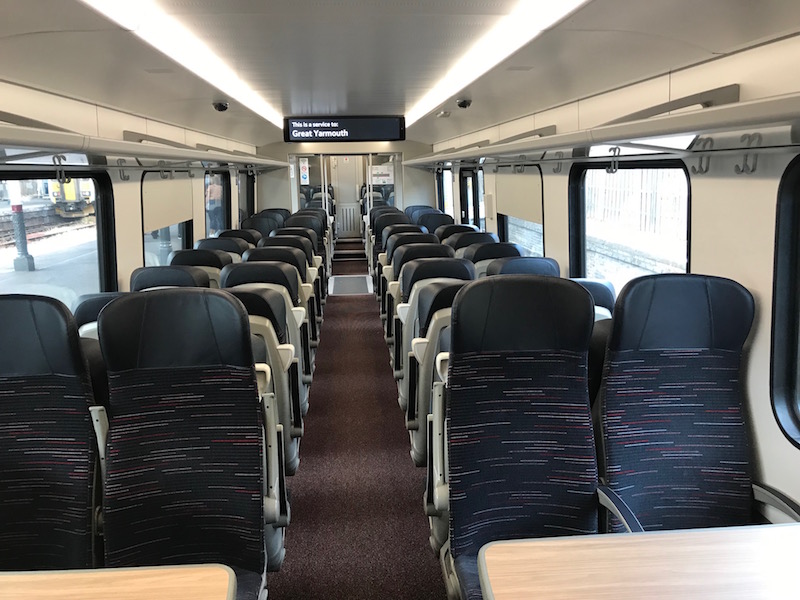 These trains, like Northern’s new Class 195 and 331, are very impressive. The acceleration from stations is quiet and powerful and the trains give a smooth ride both pulling away, at speed and braking. They look smart. They’re smart to travel in.

Today was only the second day in passenger service (the current fad, aside from LNER’s penchant for maximum profile [I see even Mallard was brought out today at what must have been huge expense] is for ‘soft launches’) and there were still plenty of Greater Anglia staff on board assessing how it was all going as well as what were probably engineers from Stadler. Lots of lanyards and high viz wearing. However I was impressed with the active staff including a friendly conductor and a train presentation team member who came through the train in between every station to clear away any litter. Not sure if this is the new norm or just a second day novelty.

Drivers both open and close the doors which is a world away from the arrangement previously used on the slam door Class 37 hauled stock this diagram previously saw. It would seem the RMT are happy with this arrangement as all seems to be well on the industrial relations front at the moment as these new trains enter service.

Here are ten features, many new, which I spotted on my journeys today and which seemed particularly noteworthy:

1. The ‘Gubbins’ compartment is not particularly noisy even when walking through it when the train is moving along, although I wouldn’t want to spend a whole journey in this narrow corridor!

2. Unusually there’s only one external double door per carriage which has an upside of facilitating more seating but the downside is longer dwell times for alighting and boarding.

This was particularly noticeable when we got to Great Yarmouth with lots of holidaymakers/day-trippers getting on and off. Luckily there’s enough stand time at the terminus but it would be a different matter at a busy intermediate station. 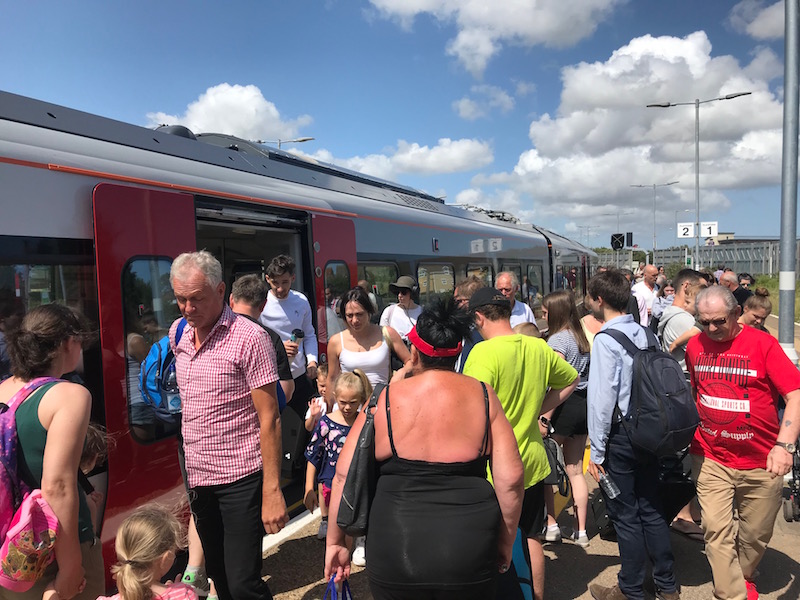 Greater Anglia say the new trains will help to speed up journeys and timetables; not if dwell times increase they won’t.

3. There’s a good supply of tables for four as well as airline style seating and unusually the tables and seats at the ends of each carriage are raised up on a small plinth giving an even better window view out on to passing scenery. 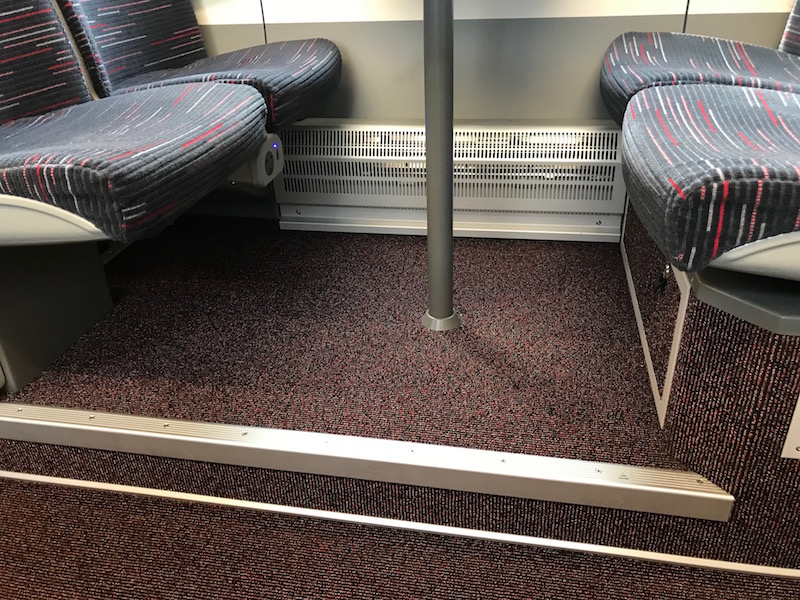 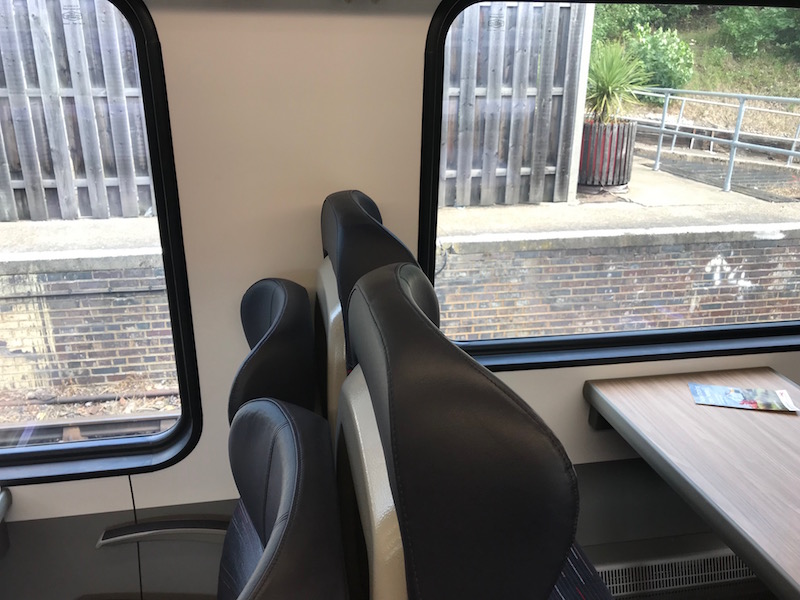 Most seats line up with windows but as always these days it’s a compromise due to a decent luggage rack being included just inside the doorways meaning some seats offer a restricted view.

4. There are two toilets per train, one fully accessible and one standard size and both are sited next to each other; which is handy if you need to go and one is engaged and the other is vacant as it saves walking further along the train.

The toilet in the accessible cubicle is well positioned with adequate space on its left hand side (when sitting down) compared to what I’ve seen on other refurbished trains where there’s a trend of placing the toilet right in the corner. 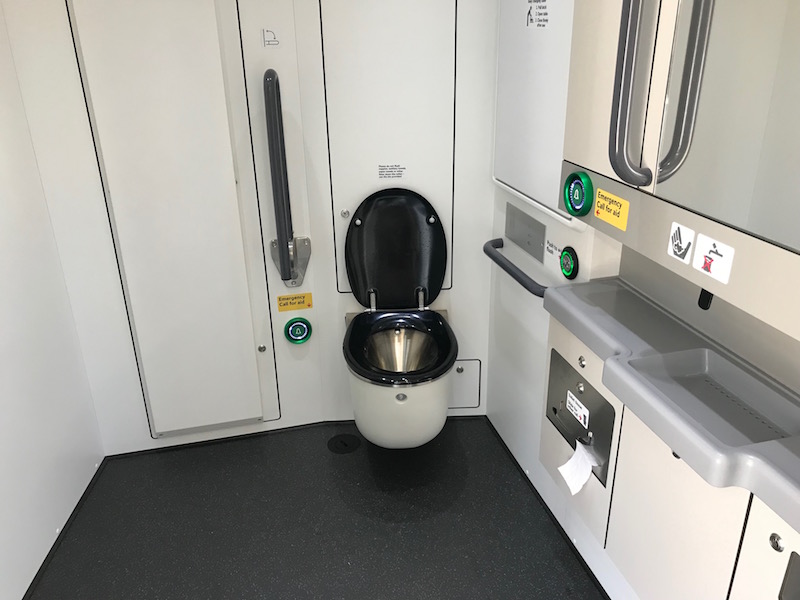 The door locking mechanism reverts back to buttons (rather than the easy to understand lever approach) but worked well – with audible confirmation the door was locked.

5. There are double coat hooks for each pair of seats including oddly above the middle of a window. 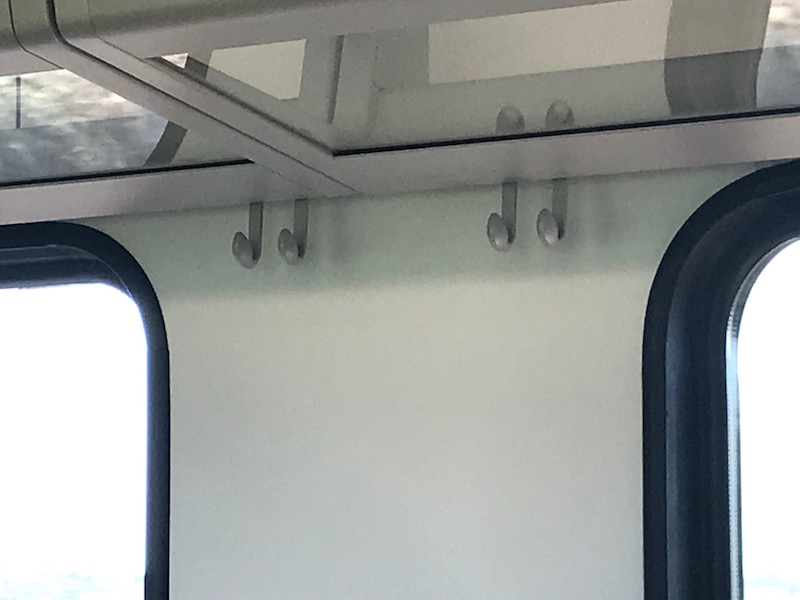 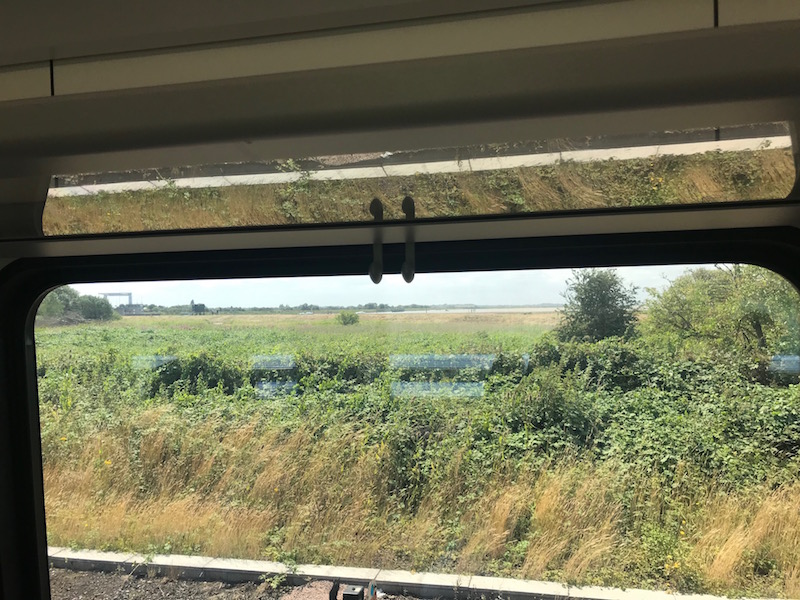 6. There’s a socket incorporating a three pin and usb underneath each pair of seats – the plug socket is upside down (depending which way you look at it, I suppose!) and is consequently a bit fiddly to use. On the upside two passengers can use it together if they sort out which socket suits them best.

7. There’s a handy step (which I think is retractable) bridging the gap between doors and platform making for easy access. 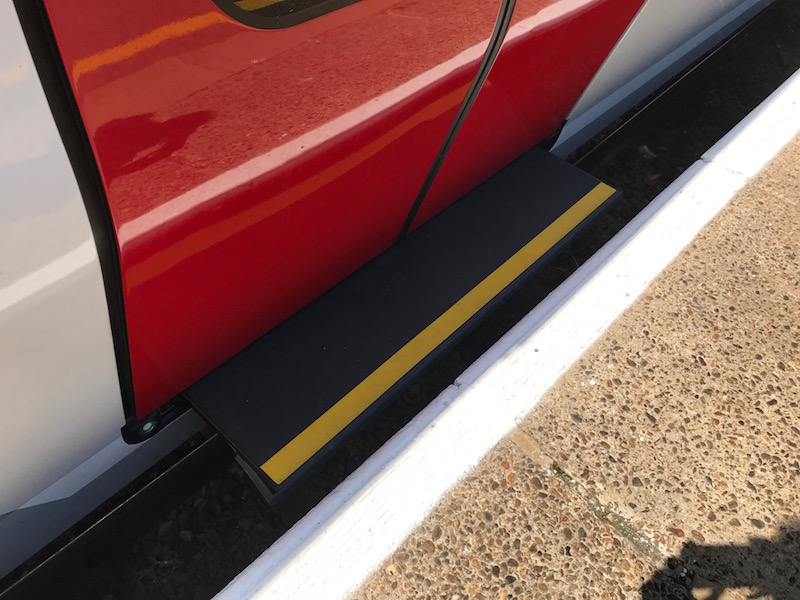 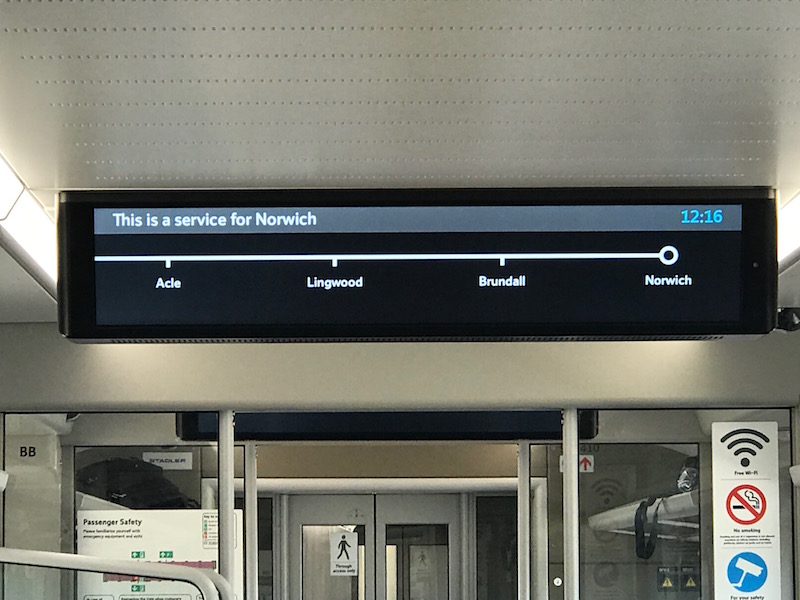 9. There are cycle storage facilities at both ends of the train away from the accessible area which is in the middle.

10. Poor old Brundall Gardens station isn’t long enough to accommodate the new four coach trains and it would seem selective door opening is not yet available so for now the regular diagram on which the new Class 755 train operates omits calling at Brundall Gardens. This obviously needs urgently sorting before any further new trains start operating.

There’s only one new train out in service at the moment – it operated both the 10:36 and 12:36 departures from Norwich to Great Yarmouth leaving the 11:36 departure to a one coach Class 153. The comparison couldn’t have been more stark.

These impressive new trains will certainly be welcomed by Greater Anglia’s passengers. I award them a full five star rating. 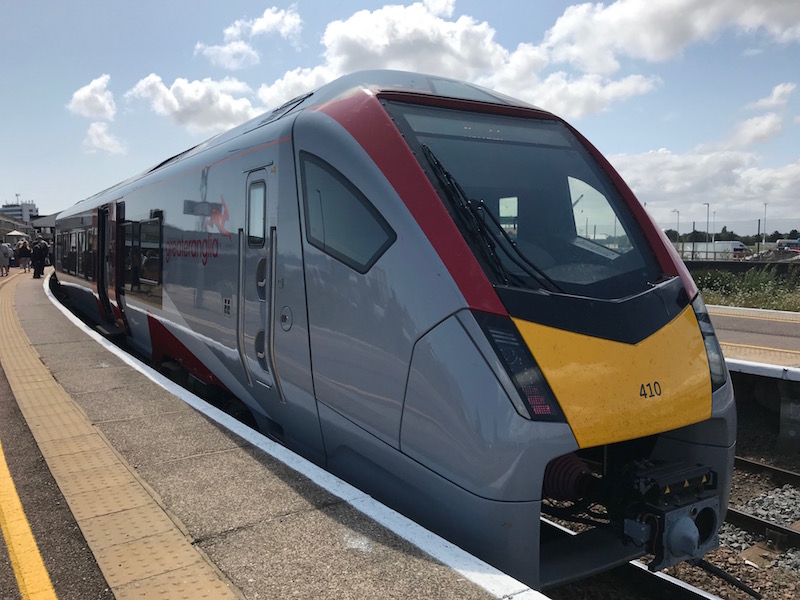