A much needed new service began carrying passengers over Hammersmith Bridge from this morning. With the Bridge closed to all motor traffic including buses since 10th April this new service is provided by a lovely man called Frederick peddling a smart electric Pedi-Cab. And very efficient it is too.

I only stumbled on Frederick and his Pedi-Cab this morning by accident as he was promoting it to passers by on the south side of the Bridge. With TfL announcing more changes to bus routes which used to cross the now closed Bridge from this Saturday (3rd August 2019) I thought it might be interesting to pop along and see how things had settled down since the hiatus immediately following the sudden closure three months ago. TfL didn’t cover itself in glory back in April with an appalling lack of updated information at bus stops and on buses.

Bear in mind although they’re called ‘temporary bus route alterations’, it’s ‘temporary’ as in ‘expected to last for at least three years’ and probably longer while discussions continue over how to fund the repairs needed to the Bridge. The word on the street this morning was at least £100 million is involved – which I guess is not that much in the context of being only about two times the cost of an aborted Garden Bridge. 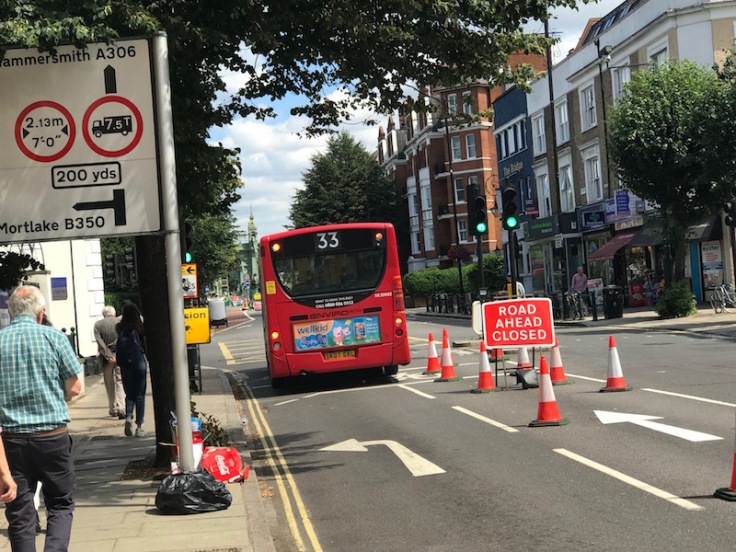 It was the sudden nature of the closure in April which seemingly caught everyone out rather than any surprise at the closure itself. It had been known for many years all was not well with the structure of the Bridge. Five main bus routes used to use the Bridge but in the southbound direction traffic marshals restricted buses crossing to strictly one at a time through a manned barrier at what must have been a significant cost (and as seen in a photograph taken over a year ago below).

Posters at bus stops explain “it’s about a twenty minute walk” which is a bit pessimistic (I did it in about fifteen), but not unrealistic for a slow walker leaving Hammersmith Underground Station and walking all the way to pick up a southbound 33 or 485 in Castelnau, the main road heading south. 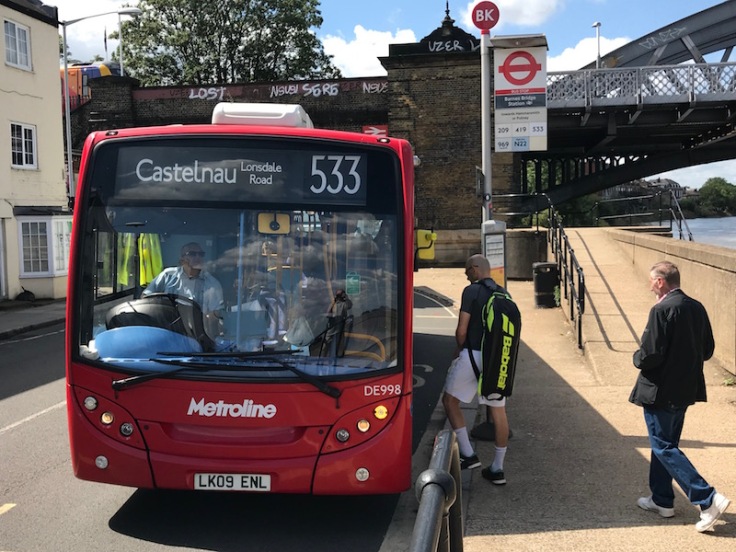 I’d heard that passenger loadings on the 533 were low and this morning found typical carryings about eight passengers per single journey; it was evident the service was welcomed by those using it.

It was also evident in the off-peak there’s plenty of running time and although an hour is allocated for a full round trip I noticed buses arriving back into Hammersmith at least four to five minutes before the next one had departed.

I can imagine traffic during peak hours makes a world of difference though especially around the notorious Hogarth roundabout on the Great West Road and a peak vehicle requirement of three would almost certainly be required.

The change being introduced from this coming Saturday, 3rd August, is to the short stub of a route 209 which used to run from Mortlake to Hammersmith – in history it’s the western end of the famous route 9 from Liverpool Street to the lovely bus garage at Mortlake.

As noted above, since April this has been diverted in Barnes to operate to Putney Bridge instead but very few people have been using it and public pressure has persuaded TfL to have a rethink and restore the route back to its original route from Barnes and continue towards Hammersmith Bridge terminating on the south side along with the 33 and 485. 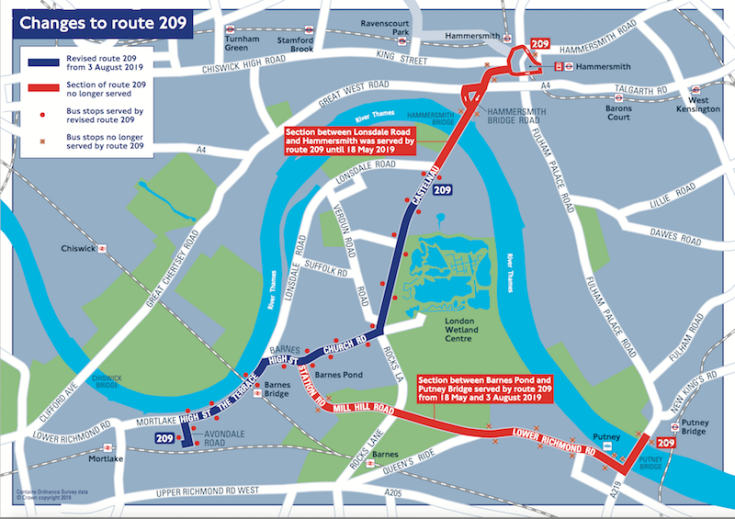 The 209 currently runs at a generous daytime frequency of every six minutes to Putney Bridge with a journey time of only 18 minutes. I saw many buses running up and down the route with very few passengers on board this morning, bearing out the public comments.

So in a bizarre move when the 209 reverts back to Hammersmith Bridge south side as a terminus from Saturday, TfL are replacing the lost section of the ‘temporary route’ to Putney Bridge with another new ‘temporary bus route’ numbered 378 running every 12 minutes; with the restored routed 209 reduced slightly to every 8 minutes. I really can’t see this new route 378 performing any useful function at all with much of it already covered by route 485 between Barnes and Putney.

The changes to bus routes have been criticised for being confusing to passengers. This wasn’t helped initially by a lack of information, but even this morning, over three months on from the Bridge closure, buses were running round with blank destination blinds (419s unable to show Barnes Pond on its extended and diverted route away from Hammersmith)….

…. and buses on the 33 unable to show the terminus on the south side of Hammersmith known as Castelnau…

…. and inevitably Spider Maps haven’t been updated, prominently displaying out of date and inaccurate information at all the affected bus stops!

Even more confusing, and from one extreme to the other for TfL, new timetables were already on display at bus stops in Barnes for the new route 209 applicable from this Saturday – no wonder a passenger came up to me as I took this photograph asking if I could help her understand what was happening…. 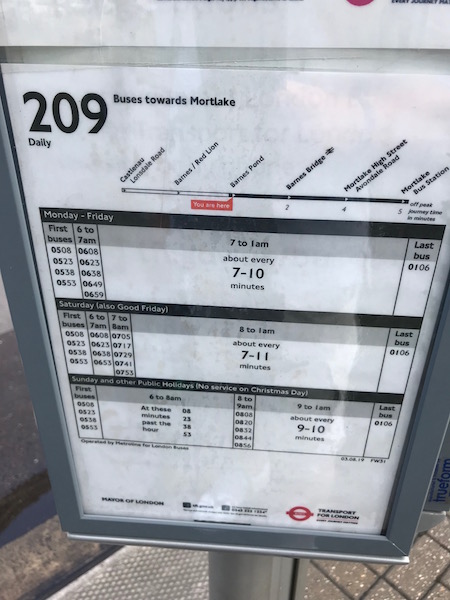 It’s good to see TfL responding to feedback though, but when residents catch the rerouted 209 towards Hammesmith, they’ve still got to walk over the Bridge from Castelnau.

Which brings me back to Frederick. Local residents were vociferous at a recent public meeting saying there should be better provision for transport options to cross the bridge other than walking, cycling or taking a long detour on the 533 bus via Chiswick Bridge, especially for those who find mobility challenging.

This has led an enterprising local resident in Barnes to start up a new electric Pedi-Cab service and employ Frederick to peddle across the Bridge as often as he can carrying up to two passengers at a time paying £2 for a single ride.

The plan is for Frederick to be joined by three more Pedi-Cabs in September when it’s hoped the service really will take off providing an attractive on-demand frequency and a decent alternative to getting cold and wet walking over the Bridge in the Autumn and Winter.

Initial hours of operation are from 08:00 to 12:00 and 16:00 to 21:00. In the morning the Pedi-Cab waits for business on the south side of the Bridge and in the afternoon on the north alongside the Apollo, opposite one of the entrances/exits to the Underground station.

It’s a great idea and I’m sure it will catch on with residents wanting to save the walk and in some way it’s suprising the rickshaws which ply their trade annoyingly in Oxford Street haven’t also caught on to the potential market in Hammersmith.

Key to its success will be frequency and getting those extra Pedi-Cabs up and running. 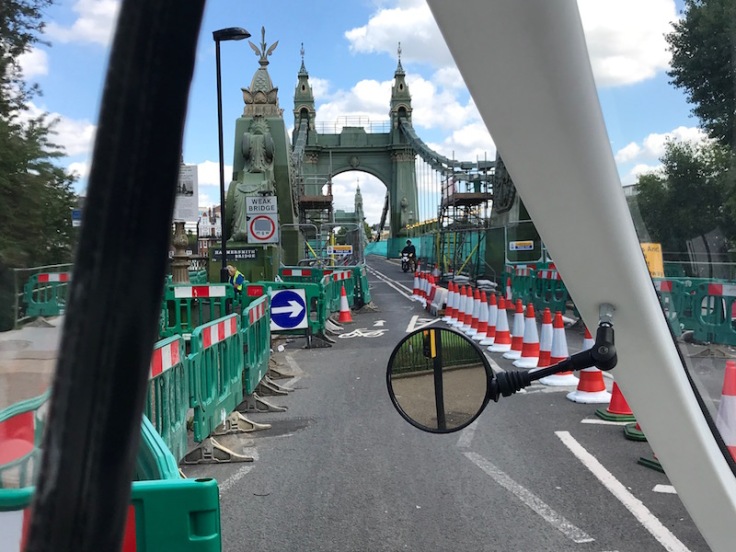 In the mean time Frederick was doing a superb ambassadorial job selling the new service this morning and his courtesy, politeness, enthusiasm and positivity really was impressive – it persuaded me to take a ride; the company Ginger running the service has found a gem in Frederick and I hope it’s a success.