It was a pleasure to travel on Northern Rail’s new CAF Civity trains yesterday afternoon and this morning. They come in two flavours – a diesel version known as Class 195 and an electric version known as Class 331 – but otherwise they’re exactly the same train with only a pantograph and engine to tell them apart. 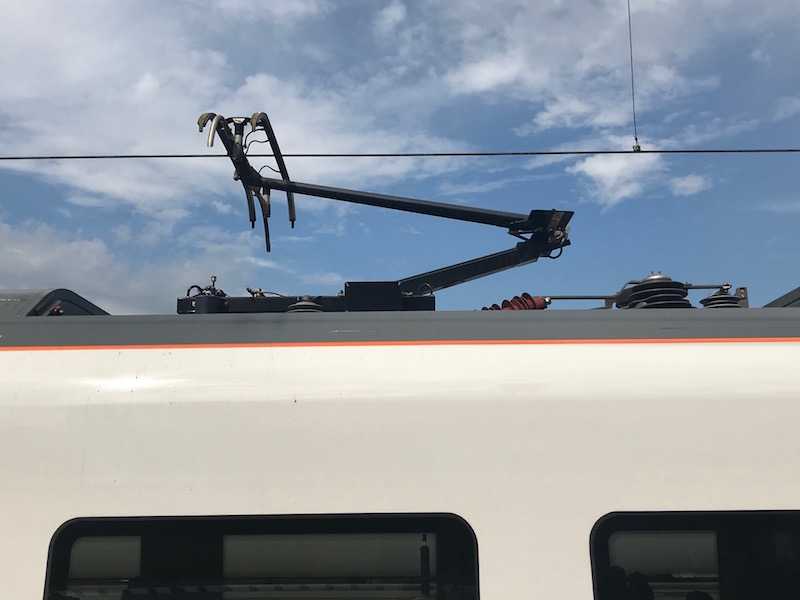 They’re built by CAF, the Spanish train builder that’s behind the troublesome new sleeper coaches although these Northern Rail trains obviously don’t come with en-suite showers and other complications for overnight travel so hopefully won’t have as many teething problems to iron out! Having said that, CAF were contracted to have these new trains into service with Northern Rail by October 2018 with delivery of the full order complete by December 2018. Still, ten months late for the introduction is pretty good the days and I understand deliveries should be complete by early next year.

The first test for me as a passenger for any new train these days has to be seat comfort. Thameslink Class 700s, GWR IETs, LNER Azumas and GWR and GatEx Class 387s have all righty garnered poor feedback in the seat comfort department and I was hoping these new trains would set a more positive experience. 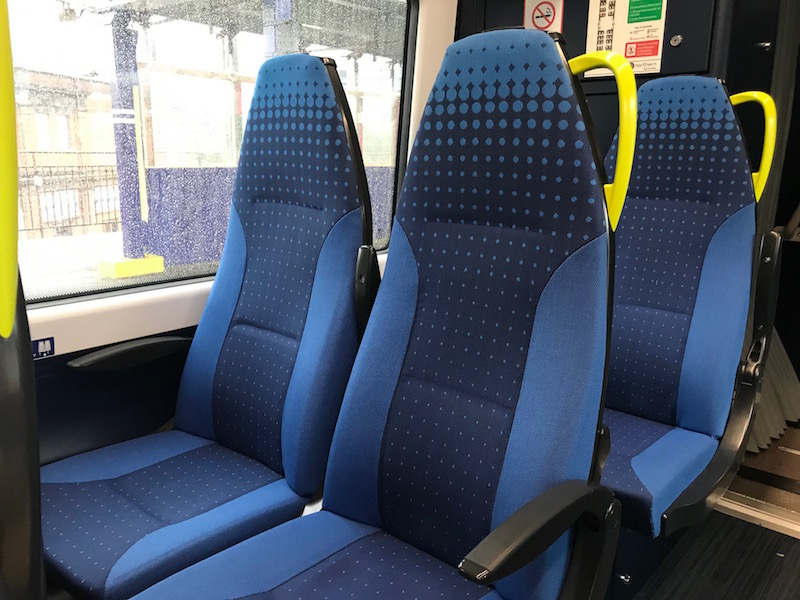 I’m pleased to report they do. They’re still not on a par with the luxury you now enjoy on many well equipped buses (eg the new TrawsCymru bus I experienced on Monday) but these Class 195/331 seats do seem to have a smidgeon more padding than recent examples with better quality seat covering and this together with a very attractive design seems to make a noticeable difference. 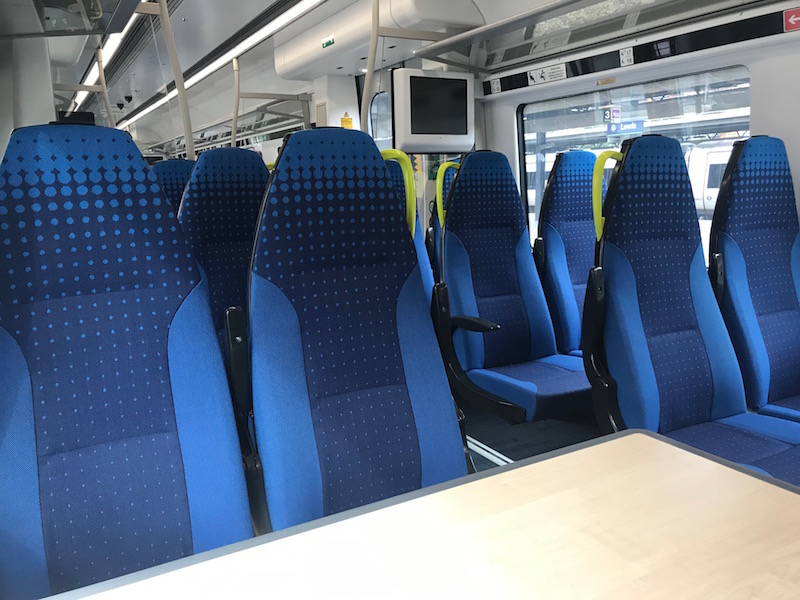 It’s also good to see a liberal supply of tables in each carriage – there are six in the middle coach area between the doors with a pair of priority seats at either end while in each coach end there are two tables and eight pairs of airline style seats.

I found the interior layout very welcoming being light and airy and those bright blue seats especially pleasing. 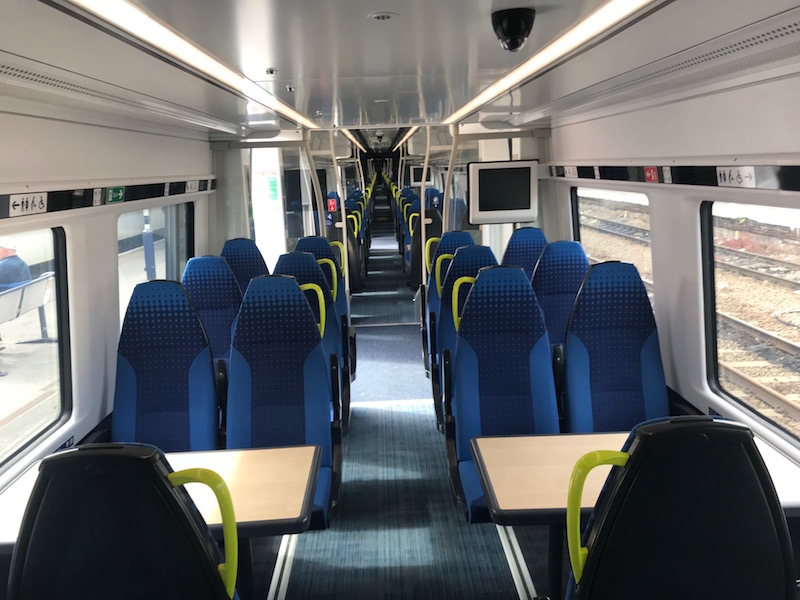 I took a ride on a three coach Class 195 from Manchester Piccadilly down to the Airport and back to Oxford Road yesterday afternoon and a trip from Leeds to Doncaster in a four coach Class 331 this morning.

Both journeys are local stopping journeys (the former originating in Windermere and returning to Barrow) and both were busy.

Aside from the seats and tables one noticeable feature as you board are the wide doorway vestibule areas leading into the saloon.

….. but the area is also useful to store over-sized suitcases passengers now wheel around especially on the Airport run…. 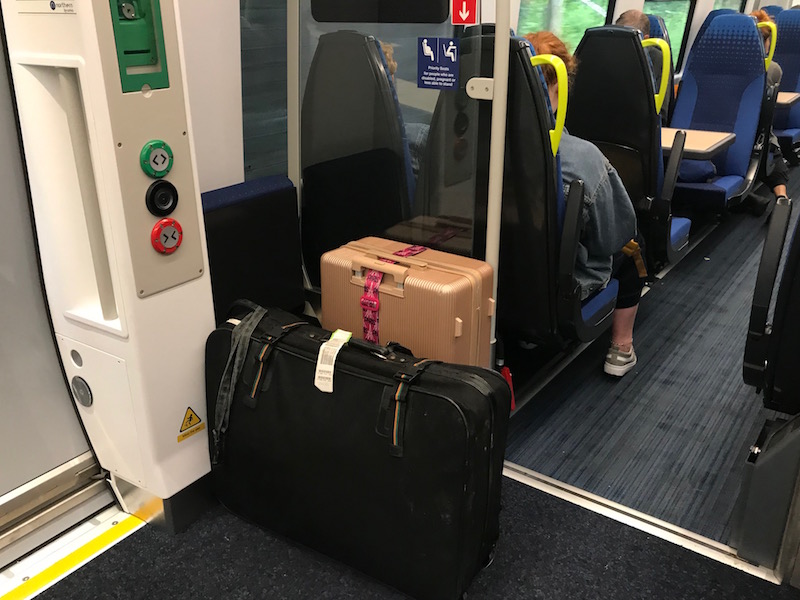 It’s a good idea and works well on Thameslink where there’s a very wide area around each set of doors.

On Thameslink Class 700s the seats are squashed together with narrow width room to allow maximum gangway space for standing, luggage etc. It’s good to see these Northern Rail trains have seat arm rests in between with a decent dividing space, although this necessarily means the gangway is standard size rather than extra-wide.

The consequence of the extra wide door vestibules is that seats and tables don’t line up with windows but you can’t have everything. Some line up perfectly so those passengers with a penchant for lining up can try and grab these seats. 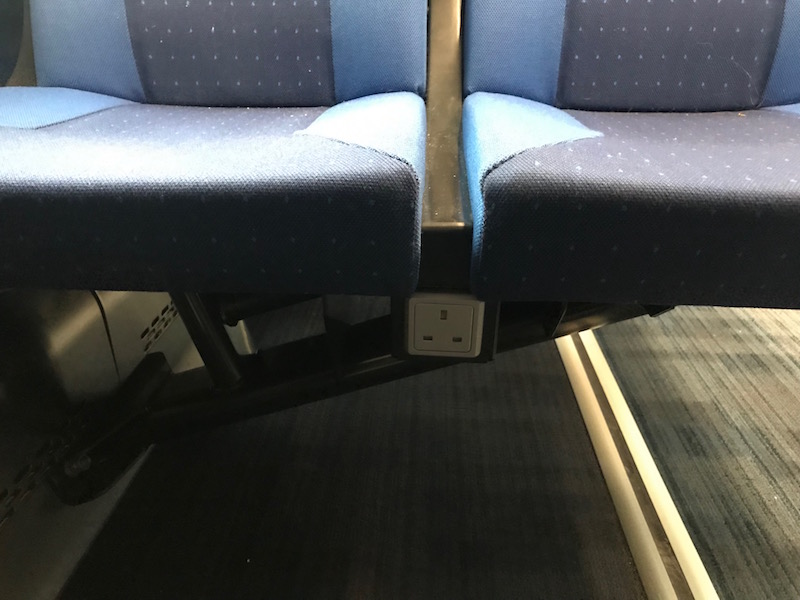 Obviously Wi-fi is fitted and free to use with a simple sign in procedure and seemed to respond well too – good to see the train sector catching up with buses at long last.

There’s provision for ‘traffic light’ style seat reservations which will be something new for Northern Rail when pursued although I can’t see it being necessary or helpful on a commuter route between Doncaster and Leeds for example but perhaps makes sense to Windermere and some other destinations served by Northern Rail.

There’s only one toilet per train (on all the 2, 3 and 4 coach versions) which is surprising especially on a four coach train – and it’s right at one end of the train too. It’s to the latest accessibility standards. Alongside this are four tip up seats as well as two standard seats by the area for a wheelchair outside the toilet door.

Two cycles can be carried in the non wheelchair driving/accessible toilet end of the train.

On both the 195 and 331 the train conductor opens and closes the doors at each station which with his/her duties collecting fares means a busy agenda. 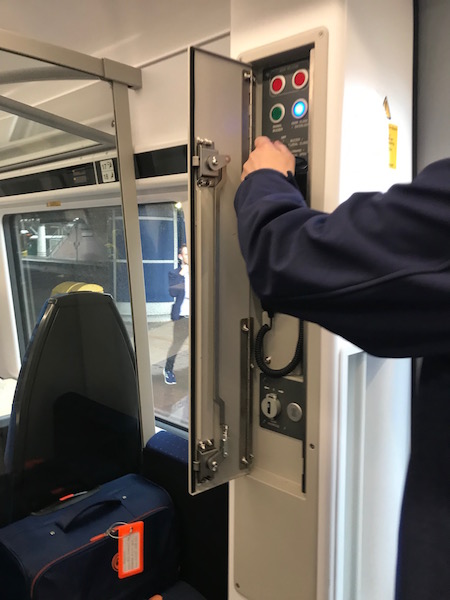 At Adwick station this morning a passenger using a wheelchair boarded necessitating the conductor having to leave his door control at the other end of the train, scuttle down to the other end to get the ramp out, then back to the other end to close the doors from the control point he’d started with and once we were off he was back collecting fares from everyone who’d boarded before we reached Doncaster where there are no gates. He was a busy man. Protracted discussions between Northern Rail and the RMT re duties for on board staff are still not resolved, but there must be a better way.

There are large open/close buttons for passenger door control with a red light shining continuously when the doors are shut switching to the green being lit when the doors can be opened.

There are decent sized screens showing the destination and next stop as well as the usual tedious notices/information which scroll round. The screens weren’t working on the Class 331 this morning.

Northern Rail are introducing an impressive total of 101 of these smart new trains in the coming months. They’ll transform rail travel across the north. There’ll be 25 two-car with 33 three-car Class 195s and 31 three-car with 12 four-car Class 331s. About half of this new fleet have so far been delivered to Northern Rail by CAF.

Overall I was impressed with the smoothness of ride and the ambience on board and these trains get a big thumbs up from me. I look forward to proudly travelling on them all over Northern Rail’s extensive area from Lincoln to Chester and Nottingham to Windermere in the future.