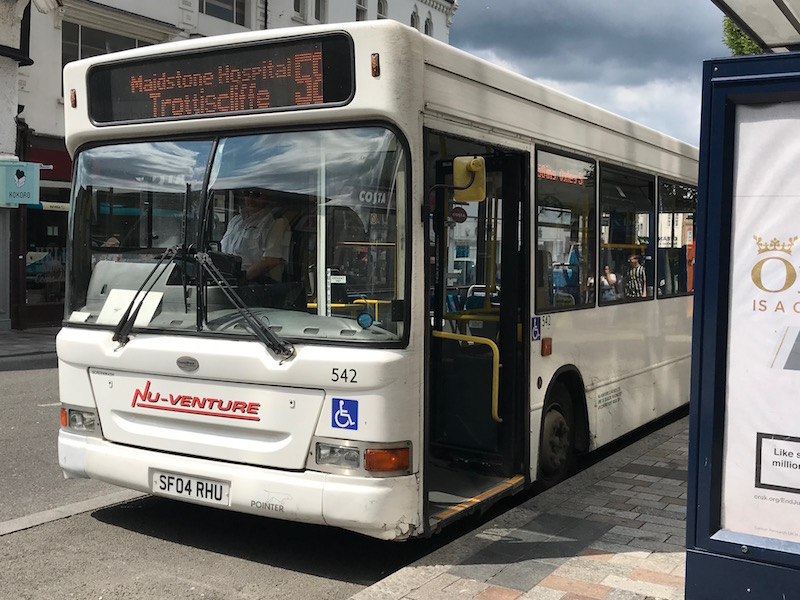 Kent County Council’s fourth ‘Rural Transport Initiative’ gets underway on Monday next week so earlier today I took a ride on the last weekday operation of the old order to get a sense of what this one’s all about. (My write up of the first three pilot schemes can be read here.) 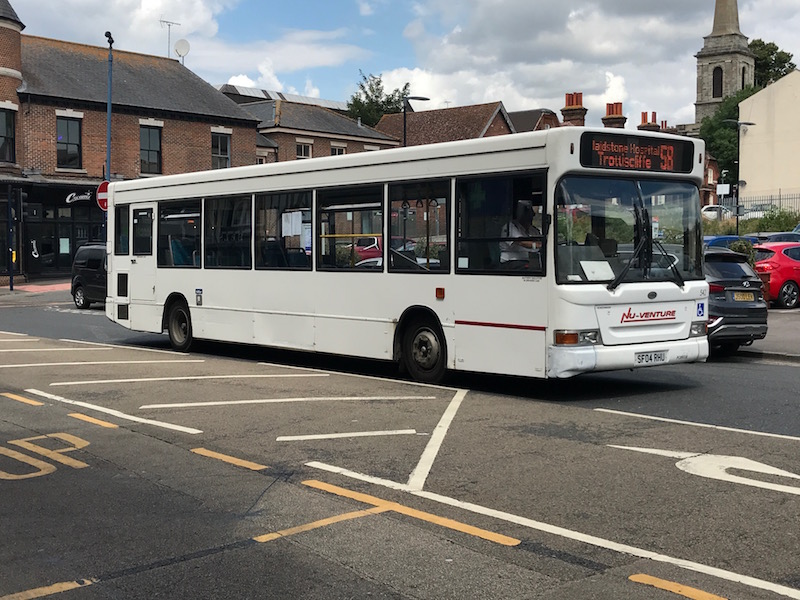 This latest ‘Initiative’ involves truncating the Nu-Venture operated rural route 58, which serves villages around West and East Malling off the A20 from its current Maidstone town centre terminus to instead only run as far as Maidstone Hospital where from Monday passengers will have to change buses on to other bus routes which Arriva operate for the remaining four mile journey into the town centre.

It’s about an eighteen minute ride from the Hospital to the town centre and to offset the negativity of passengers having to change buses the County Council and Nu-Venture are promoting a more frequent timetable on the shortened route 58 around the villages. 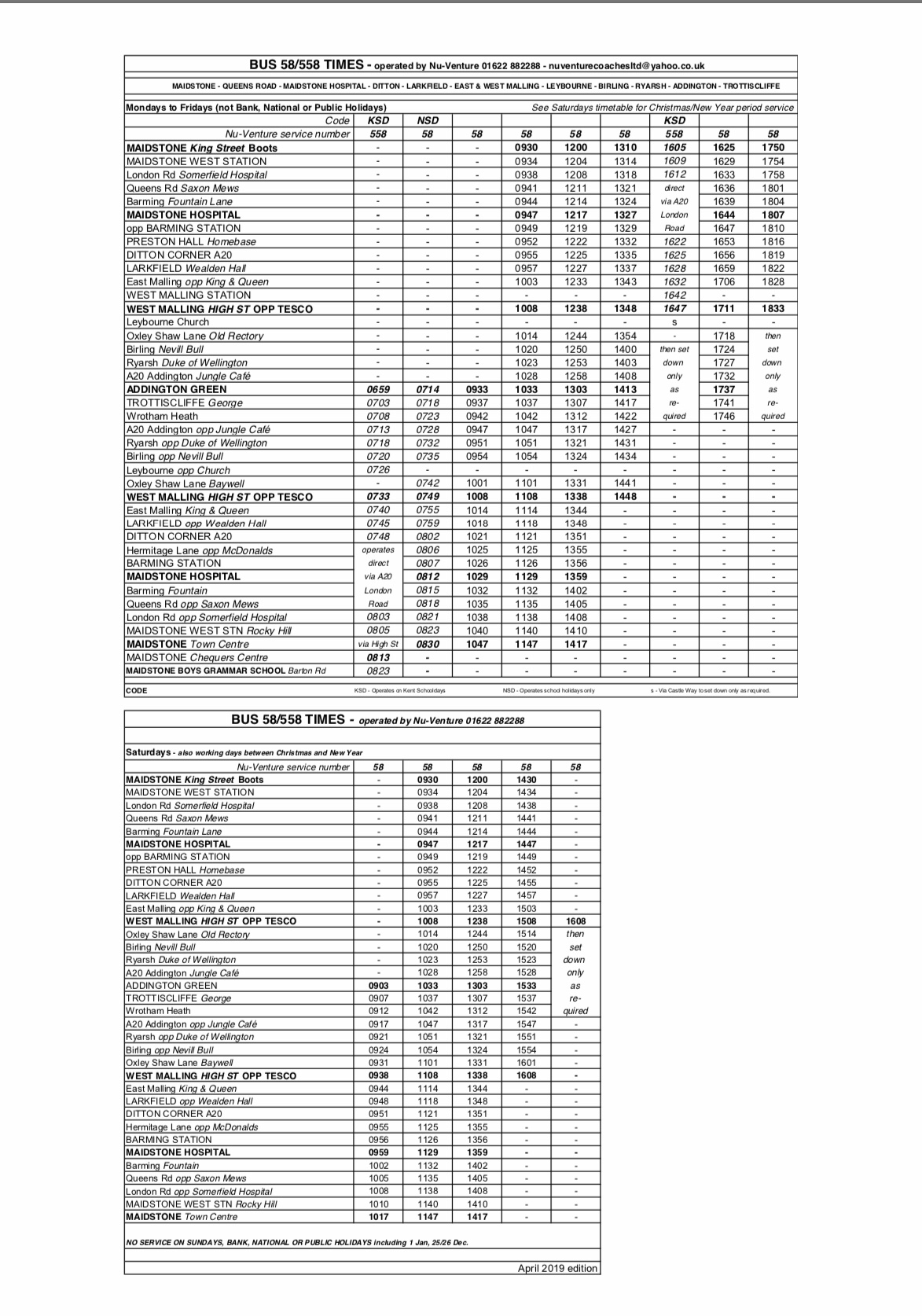 The current timetable (above) which ends tomorrow includes just three off peak journeys into Maidstone (aside from a peak journey primarily aimed at scholars which will continue to operate as a through journey as now) and four journeys suitable for returning. However, the new timetable boasts seven journeys to and from Maidstone Hospital which offers pretty much an hourly service except for a gap around 15:00 when it looks like one of the two buses is tied up with a school journey. 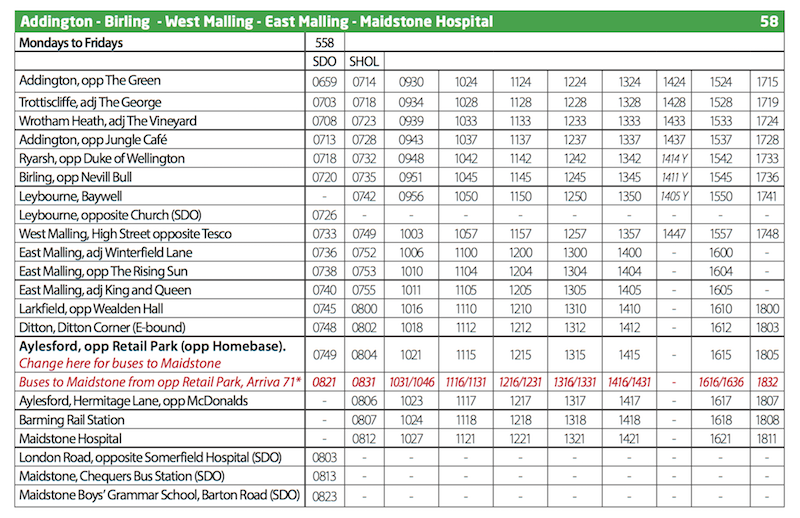 Residents of Addington, Trottiscliffe, Wrotham Heath, Ryarsh and Birling as well as West and East Malling will have a much greater choice of journeys from Monday but if they want to travel all the way to Maidstone town centre there will be a time penalty in changing buses. 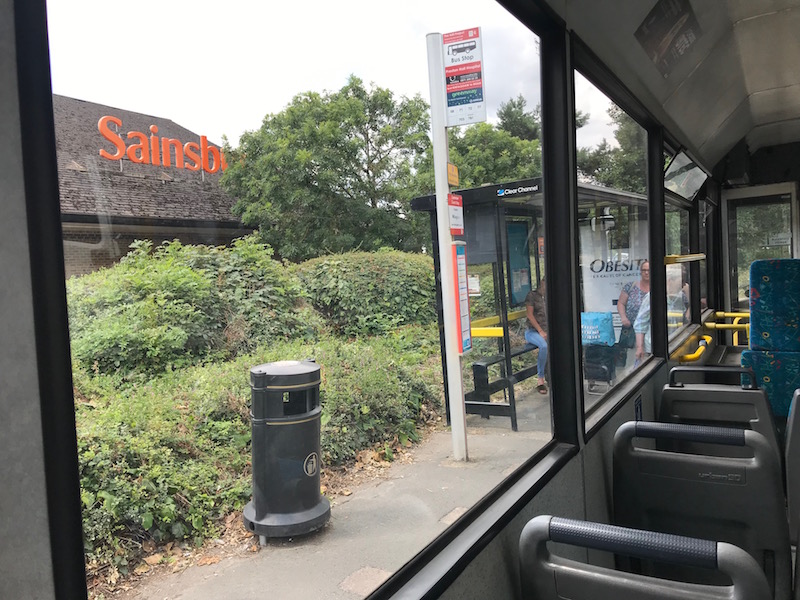 The recommended point to make the change is alongside Aylesford Retail Park on the A20 where there’s a bus shelter and real time information rather than continuing for another six minutes to the Maidstone Hospital terminus but Kent County Council’s leaflet also helpfully explains “passengers can choose to change buses at any stop served by a different bus service that operates to their end destination”. 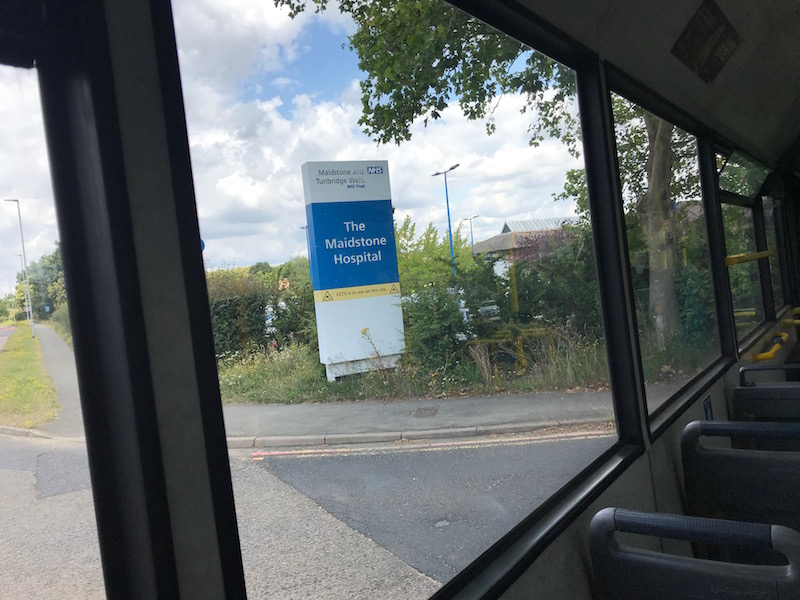 Arriva operate four buses an hour on routes 71/71A and another hourly 72 between the Retail Park and the town centre while there’s a twenty minute frequency on route 3 and an hourly route 8 to and from Maidstone Hospital. The Kent County Council timetable leaflet gives details of connecion times towards Maidstone which as you can see in the timetable above are a bit tight at either just one minute, or a bit inconvenient at 16 minutes on most journeys.

As always with these things it’ll be the return journey when there’ll be the most angst as astute passengers will need to allow enough time to make the connection with the fixed departure on the 58 they’re aiming for else risking missing the bus and endure an hour’s wait for the next one. You won’t be best pleased if that happens more than once and could easily be dissuaded from travelling again. 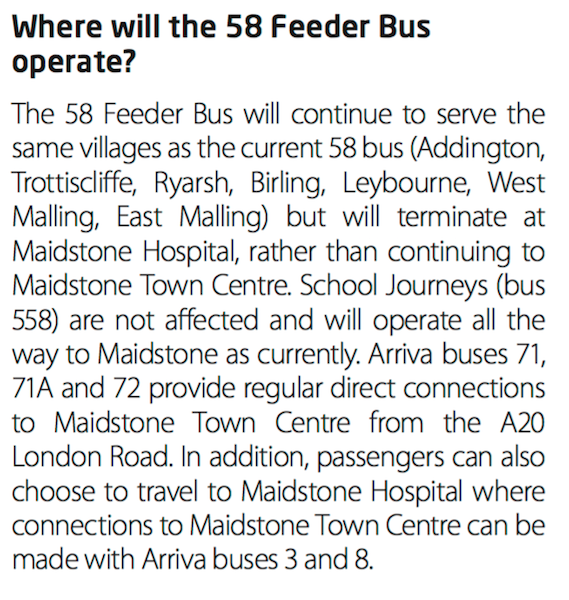 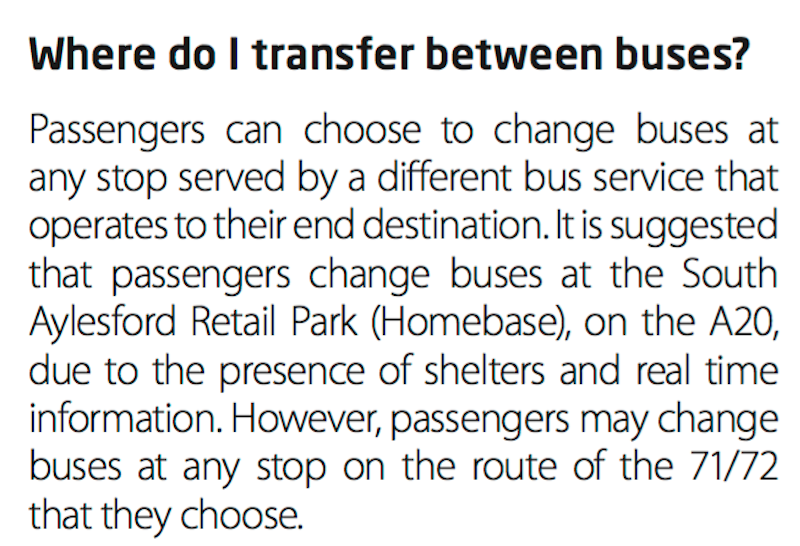 The Kent timetable leaflet highlights suggested arrival times from the 71/71A at the Retail Park (with either a long 23 minute connection or 8 minutes) but rather unhelpfully doesn’t show what time these buses leave Maidstone town centre which is an unfortunate omission. 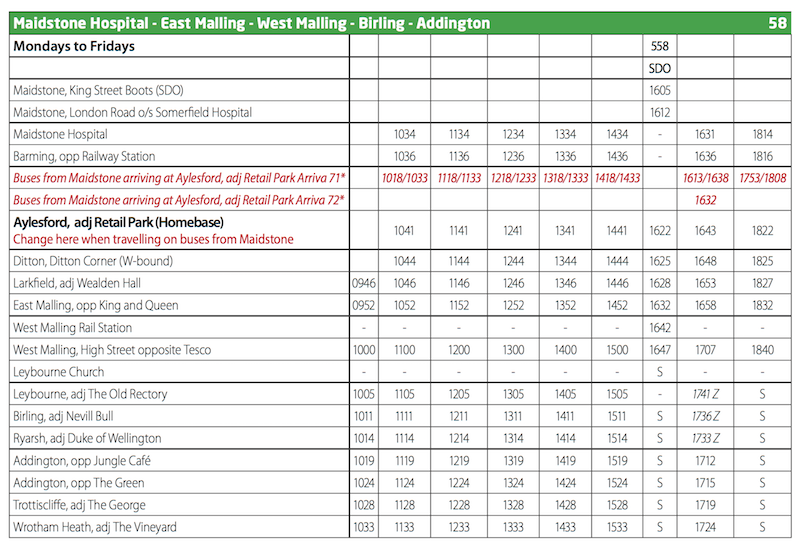 Kent and the operators have commendably arranged for the issue and acceptance of through tickets so passengers will not have to pay more, but I suspect this arrangement only applies on journeys towards Maidstone and passengers boarding an Arriva bus on the 71/71A/72 or even the 3/8 in Maidstone town centre asking for a fare to Addington will be met with a blank stare by the driver. I chatted to Norman Kemp at Nu-Venture this afternoon about this and he was seeking clarification from Kent County Council on what arrangements have been made with Arriva for people boarding in the town centre and wanting a through ticket. The timetable leaflet is somewhat silent on this point! 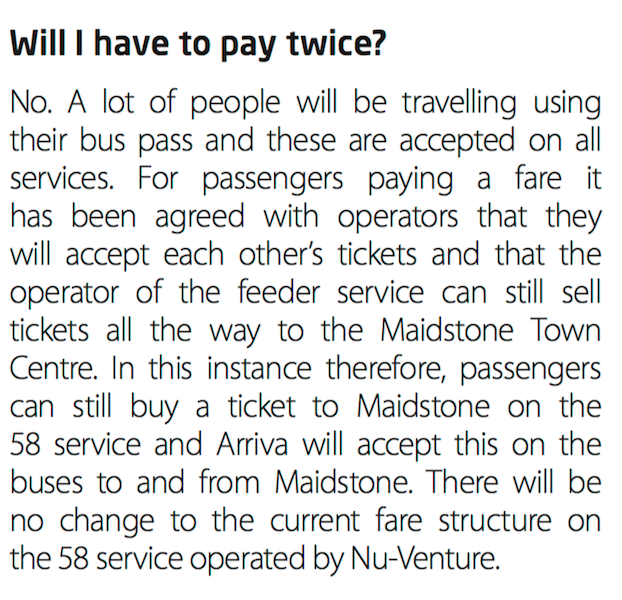 The new regime from Monday involves Nu-Venture operating two 16-seater Mercedes Sprinter minibuses on the truncated route 58 which from my observations earlier today will be well able to cater for the numbers travelling as well as being more appropriate vehicles for the narrow lanes on part of the route – we met a few vehicles while on route which necessitated them reversing to let us through. 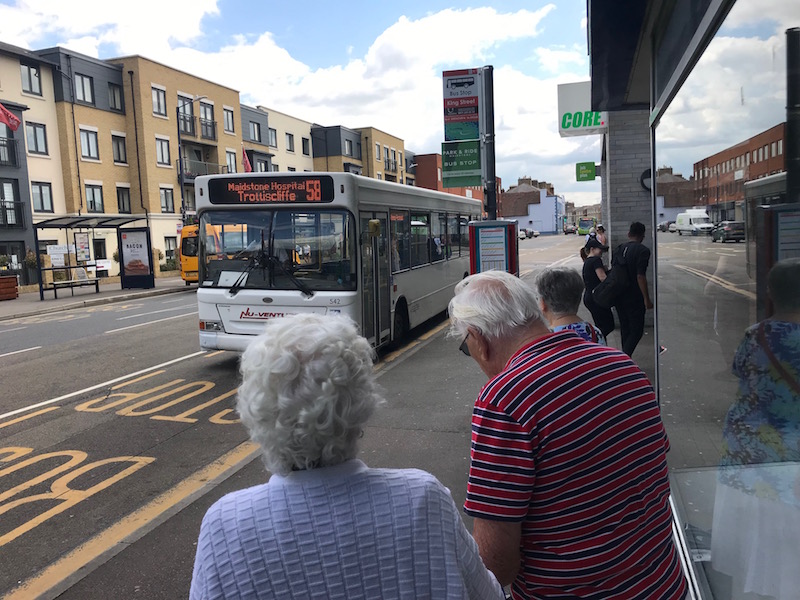 I rocked up this morning for the departure to Addington and Trottiscliffe from Maidstone at midday at the first stop outside Boots, which was just as well as the driver wasn’t able to change the £10 note I offered for the £7.20 return fare, which also struck me as a bit on the pricey side.

Luckily there was six minutes until departure so I offered to go and buy something in Boots to acquire some change but what to buy for up to £2.80 when you only have a couple of minutes to decide and end up in a queue behind a customer querying the balance on her Advantage card! I made it back to the bus just in time at 11:59!

On the positive side the driver handed me a leaflet explaining the changes and the new timetable from Monday which was very helpful.

We left with seven other passengers on board but five alighted before we reached Maidstone Hospital so will be able to travel on other Arriva bus routes from Monday and won’t miss the 58 disappearing.

At the Hospital two gentlemen boarded in a state of consternation asking the driver why he was so late. It turned out they’d been looking at the new timetable not realising it hadn’t started yet so were expecting us at 11:34 whereas we’d arrived at 12:17. Our driver handed them a copy of the new timetable leaflet so hopefully they’re now better informed of the new arrangements and when they start. 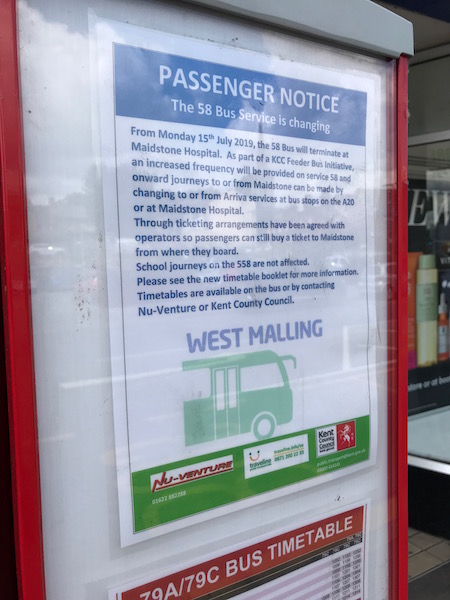 I had noticed new timetables had already been posted at bus stops along the route together with a poster explaining the changes and I’d also spotted there were no 58 times showing at the Boots bus stop (photographed below), assuming the service had already been withdrawn from there. It’s always difficult to get timetables posted at bus stops exactly as routes change, and on balance it’s better to have new times a day early than old times a day late, but the ideal is to change over on a Sunday of course. In the old days I remember London Transport used to print the commencing date across the timetable in outline print which gradually faded over time! 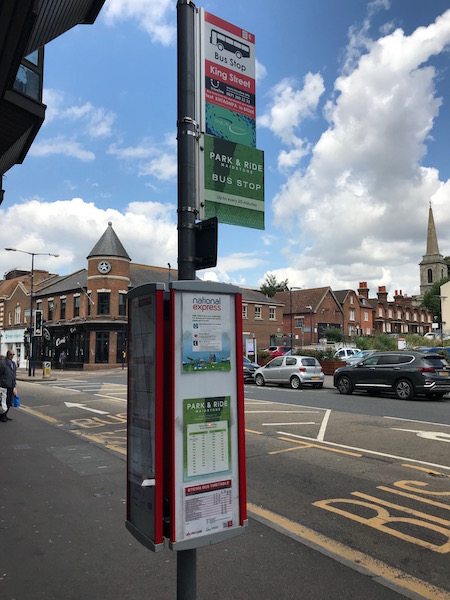 At the recommended new changeover point at the Retail Park by Sainsbury’s we picked up three new passengers but two stayed with us for only a couple of stops along the A20 and they also have other bus options from Monday; the third alighted in East Malling so, together with the two gents from the Hospital who got off at West Malling will benefit from the new more frequent service. One more passenger who’ll benefit boarded at West Malling and travelled to the village of Ryarsh.

However two passengers who’ll find Monday’s timetable less convenient are the two still left on board after Ryarsh who’d boarded in Maidstone town centre. These two teenagers alighted at Ford Place , a rather nice Grade II listed property just before we reached Wrotham Heath (photographed below). 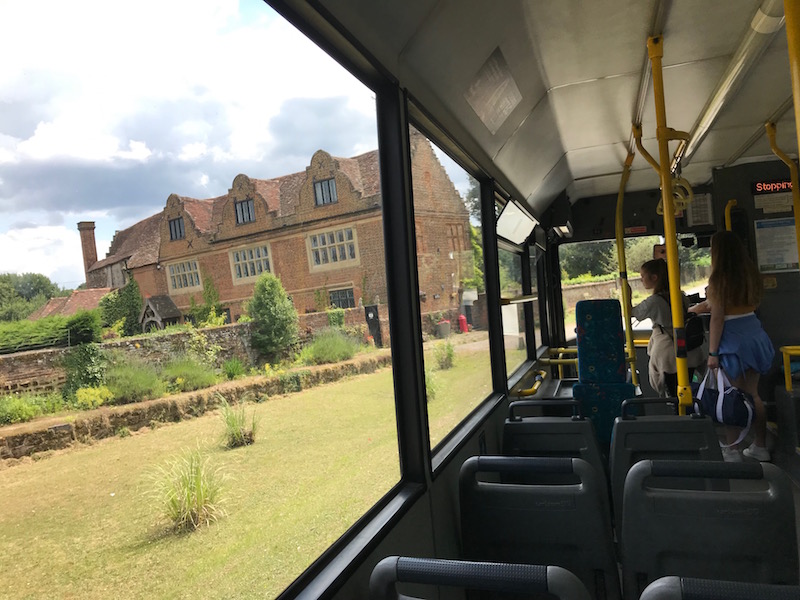 Route 58 operates on a large one-way loop through Addington, Trottiscliffe and Wrotham Heath before returning through Ryarsh and Birling then Leybourne and the Mallings to Maidstone. On our return journey we took one passenger from Ryarsh to West Malling and two more from West Malling to just after East Malling – they’ll also have a more frequent bus from Monday.

But that was it. Not exactly overloaded, and two 16-seaters will easily be able to cope from Monday.

Kent County Council reckon this new “feeder bus” arrangement, coupled with the greater frequency of service, is a possible way forward for rural communities. I have my doubts there’ll be the generation of passengers needed to justify the extra mileage and staff costs as well as committing more vehicle resource than currently, but it’s encouraging to see both Nu-Venture and the Council giving this a try, and with a guaranteed one year funding for the pilot, it will at least have time to settle down and residents become used to the new arrangement and hopefully give it a try. 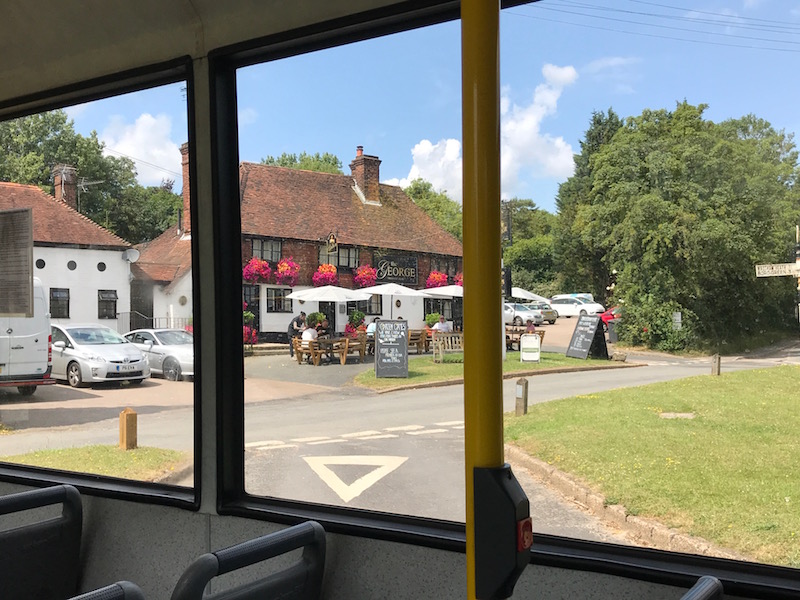 The villages we passed through (eg Trottiscliffe above) were certainly “desireable” and “high end” (in Estate Agents parlance) and if more rural bus passengers can be generated from the palatial residences we passed then we certainly will be on the way to solving the rural transport challenge. I reckon it’s going to be the need to change buses that will be a downer on the potential, especially with those connectional times. It really needs to be ‘feeding’ a more frequent “turn-up-and-go” bus to stand any chance of success.

The fifth and final Pilot involves a similar feeder service to the east of Maidstone involving Nu-Venture route 13 and Arriva route 59 but this is delayed until the Autumn pending highway and utility works needed to create a change-over point for the feeder bus.

Well done to Kent and Nu-Venture for giving this a go and good luck. I told Norman I’d take a ride some time soon on the truncated 58 to give the new arrangements a try out, so I hope my scepticism about that through fare from the Maidstone end proves unfounded!

6 thoughts on “Another rural pilot in Kent” Leave a comment ›

BusAndTrainUser – journeys around Britain by bus and train Another rural pilot in Kent
%d bloggers like this: