Let’s get the usual bit out of the way first …. “at last, after many delays” etc etc. Same old story, of course, and in the Azuma’s case it still hasn’t quite been sorted with onboard technical issues to do with electrical and signal compatibility north of Darlington still to be resolved; so for now you can only Azuma between Kings Cross and Leeds and the one return journey a day LNER run to and from Hull.

Then there’s the usual PR spin in the Media Release and glossy brochure I filched when gate crashing Tuesday’s launch: “Setting new benchmarks in rail travel is part of our DNA….LNER is on a mission to transform rail travel…….state of the art……..environmentally friendly……world class…..” I completed my media release buzzword bingo card even befrore the end of Page 1.

“The Azuma train will be the first of 65 new trains to replace the existing fleet of 45 trains operated by LNER on the East Coast”. Sounds impressive. You had to look at another piece of paper to note that 22 of the 65 new trains will only be five coaches long with 43 being the standard 9 coach lengths we’ve been used to with the Mark 4, and HSTs. But to be fair, we’re also told there will be “an average of 100 more seats on every train compared to the current fleet”. Not sure how that “average” has been worked out but it sounds impressive, and we certainly need more seats at busy times so that’s all good.

Hitachi the manufacturer are proud that the 42 electric and 23 bi-mode trains have “over 70 per cent of parts sourced from the surrounding areas of our factory” which is in Newton Aycliffe. “Azuma may look like a Japanese-bullet train, but underneath it is very British” we’re told. How apt for these turbulent times. 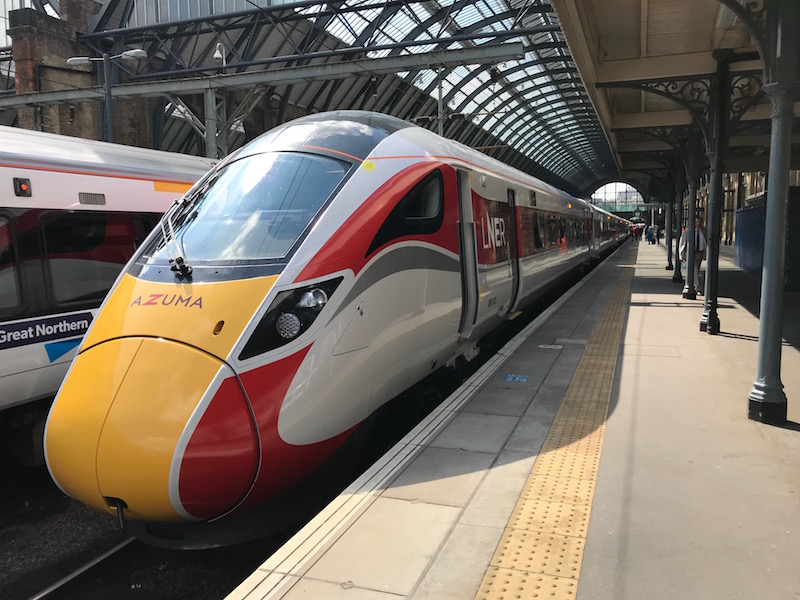 There are a few upsides from the significant delay in getting these trains on the tracks: it’s given LNER time to finesse the branding which perhaps GWR didn’t have, while gradually phasing them in on the Leeds line enables staff to get used to them. Which was the first thing I noticed arriving at Kings Cross yesterday morning for the 1103 departure to Leeds; LNER staff everywhere.

There’d been even more at the razzmatazz media launch on Tuesday of course, but although the band had long gone to their next gig, the dry ice turned off and the stage and microphones packed away (and all that was without the ‘Branson’ influence who loved nothing better than staring in a high profile media launch)……

….. for day two in service, there was still a large number of red lanyards around necks on the platform as well as on board. I’m sure some of it is training teams from across the network as well as giving managers and other staff the new-train-in-service experience. I couldn’t make out the job titles on all the name badges but I reckon most LNER offices must have been empty yesterday.

The mystique of using an Azuma brand is a typical Virgin/Stagecoach ploy now inherited by LNER; and it works a treat. ”Hello and welcome aboard this LNER Azuma to Leeds”, the auto announcement plays out as the train departs every station. Mind you there’s never any passion in an auto announcement so that touch point didn’t quite do it for me.

The whole branding, livery and image is in a different league to the same trains running on the Great Western with their more staid dark green and grey and no one quite sure whether to call them IETs or Class 800s (or 802s).

Although they’re the same seats as used by GWR the moquette somehow gives the perception of a little extra padding and my two and a quarter hour journey to Leeds was comfortable but perceptively less luxurious than the Mark 4 leather seats in First Class, but that’s a sign of the times. I also tried out the Standard Class seats – I think Leeds is about the furthest I’d like to travel – certainly worth taking a cushion if ever you take the train all the way to Inverness or Aberdeen. Leg room is good and I particularly noticed the “up to an additional 7cm leg room” the media release boasted about in Standard Class. Well done LNER for that. 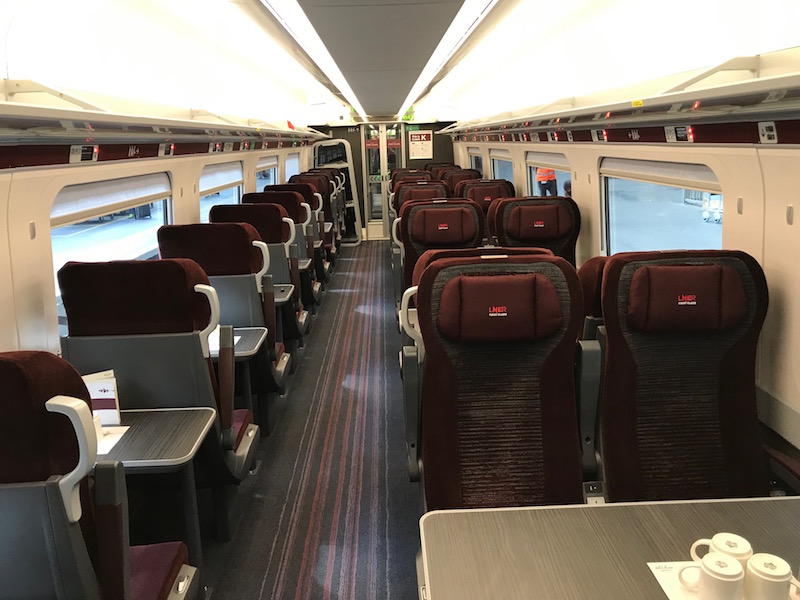 I’m a bit of a seat layout obsessive and always try and find the best seat that suits me in each train set so paid particular attention to this aspect. Whereas in First Class on a Mark 4 the 2+1 layout swapped sides at the mid point of the carriage to create a wide passing area with two single seats facing each other on opposite sides of the carriage (my favourite spot) now in Coach L (shown above) it’s a straight 2+1 throughout the carriage with ten single seats facing one direction and nine in the other (plus a luggage rack where the tenth would be) HST style, giving only one pair of single seats facing each other over a table in the middle of the coach. On the other side seats are in tables for four (as on Mark 4s) with two pairs airline style facing north.

The end First Class Coach M which has two accessible spaces by the entrance door has five single seats all facing north with none facing south so if you’re travelling First Class and like ‘facing the engine’ book yourself a seat in coach L or half of K when London bound rather than M. Coach K (shown above) has seven southbound facing single seats and three northbound.

The accessible spaces for passengers using a wheelchair in both First and Standard Class include a large space between the back panel and the table. This makes for easy manoeuvring but if the passenger parks their wheelchair up against the panel, they won’t be able to enjoy a window view.

The table lifts up but I wonder if all wheelchairs would fit under it when in the down position leaving the passenger sitting awkwardly if not. I’m sure that’s all been thought through though and my concerns are unfounded. 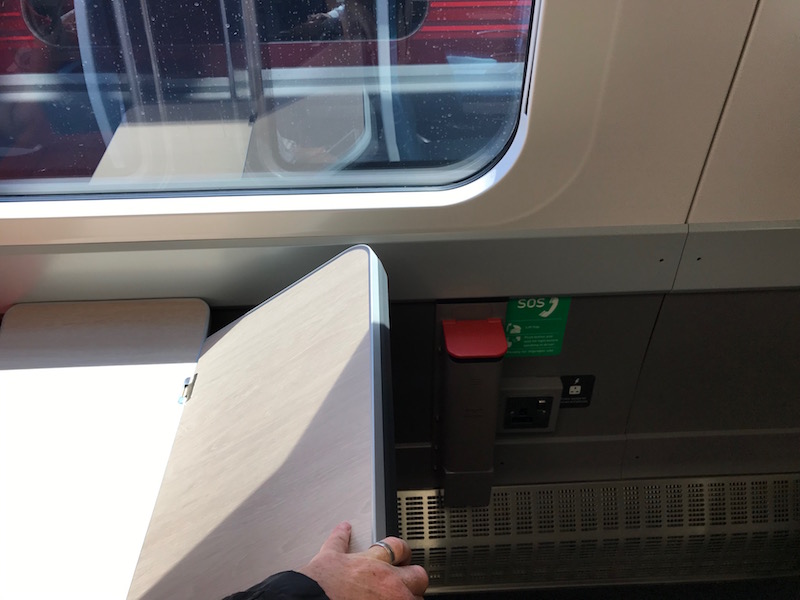 There’s the usual mixture of Standard Class seats airline style and tables for four to a similar arrangement to the Mark 4 coaches. 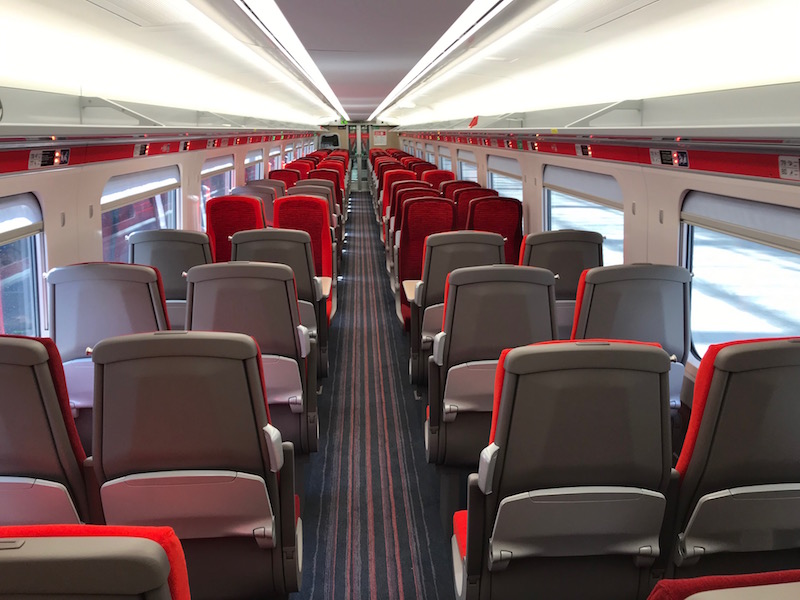 “Our spacious new Azuma coaches give you more places than ever before to store your luggage” LNER’s ‘Your guide to AZUMA’ explains. I seem to be an exception these days by travelling fairly light with a small rucksack easily stored in an overhead rack but it seems to me suitcases with wheels have opened up a large number of wardrobe addicted travellers and even a fairly lightly loaded train to Leeds yesterday morning had luggage racks full leaving Kings Cross.

However on exploring the train further I came across a lockable storage cupboard for even larger luggage items…. 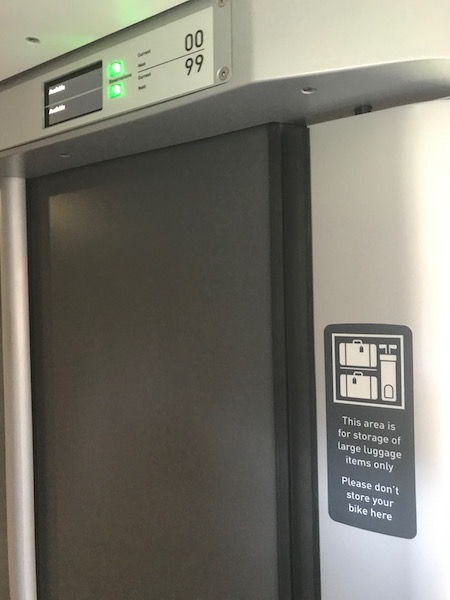 ….. and there are other similar cupboards for cycle storage too. 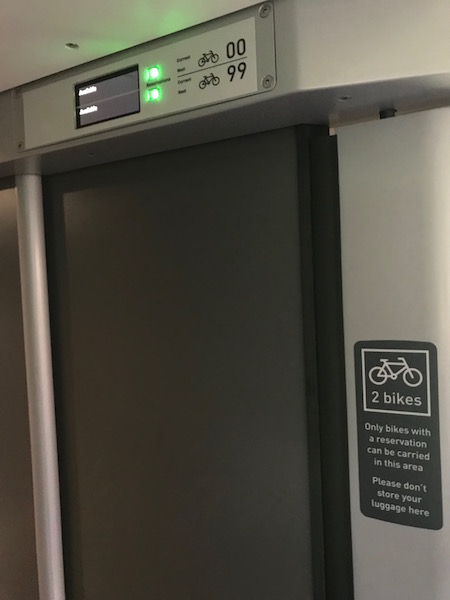 There’s the inevitable ‘restricted view’ seat/s which makes me think this area really would be an ideal space for an extended luggage rack to store those mini wardrobes and would only lose minimal seating capacity. 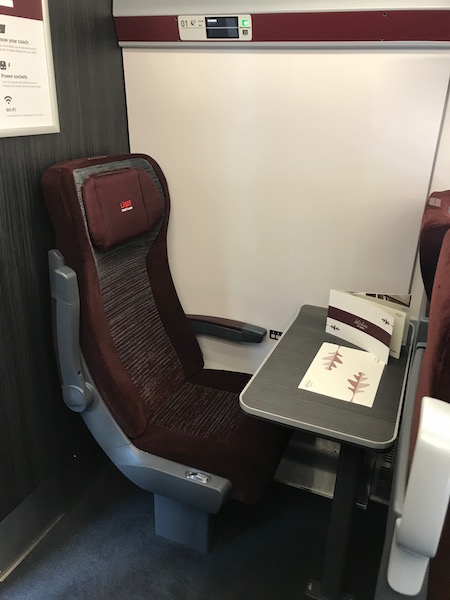 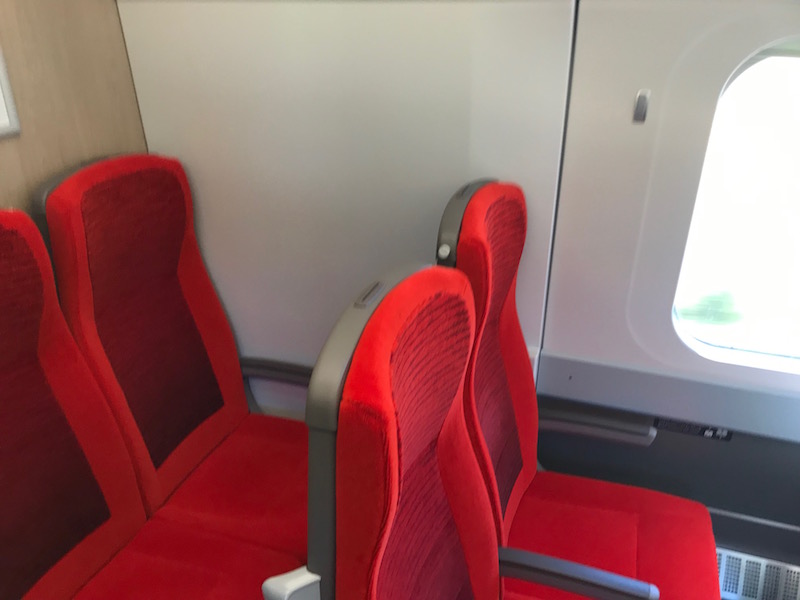 Unlike GWR’s IEPs the Azuma has a nice buffet area mid train in Standard Class (and it’s not just any old buffet area, it’s a “Let’s Eat Cafe Bar” where you’ll find “locally sourced ingredients from along our route form the ingredients for the best possible onboard catering”. To me it looked like just the usual range of drinks and snacks but perhaps there’d all been sourced from the local Grantham branch of Bookers……

…. and in First Class the kitchen occupies the rear portion (heading north) at the end of Coach M.

Indeed it takes up a surprising amount of space in Coach M – offering complimentary food making for an interesting business model about the use of space and customer expectations on service and what’s included.

Which brings me to the all important pricing, as Judith Chalmers used to say on the Holiday TV programme, or was it Wish You Were Here?

I booked yesterday’s return journey from Kings Cross to Leeds online a month ago on 18th April. First Class tickets with a third off Senior Railcard cost £29.05 northbound and £37.60 southbound (all the £29.05 tickets had gone) making £66.65 in total. If I’d opted for Standard Class it would have cost just £11.90 both ways; £23.80 return. A tasty curry (I could have had two – one going to Leeds and one on the return), fruit, crisps, biscuits, a chocolate and caramel pot, juices and coffees were all complimentary in my £66.65 ticket price. That’s what I call excellent value. Mind you if I’d just rocked up and bought my ticket at Kings Cross just before departing it would have set me back £223.10 with a Railcard or £74.09 Standard Class – the latter is not bad value for a turn up and go flexible ticket – albeit with some peak restrictions.

… and there are these connecting cables between coaches which have been the subject of considerable concern from the Office of Road and Rail – it’s thought they might invite people to climb up on to the roof so modifications are being arranged.

Yesterday’s journeys went well. The Azuma acceleration and ride quality is impressive but we’ve got used to that on GWR; it was still pretty awsome to accelerate silently out of Kings Cross and into Gasworks Tunnel bang on time at 1103.

We stopped at Peterborough and approached the next stop at Doncaster five minutes ahead of schedule. After Wakefield Westgate we arrived Leeds a minute down at 1317. It was a good run and a memorable first journey experience.

The 1345 return back down to London was equally smooth with a slight early arrival into Kings Cross. Once again there were LNER staff enjoying the ride but the catering staff seemed to be struggling only serving some passengers who boarded at Leeds with their hot meal as we were leaving Peterborough at 1510 which was when the hot drinks trolley made its first appearance.

I’ve noticed catering standards slipping on recent journeys with LNER and hope this can be sorted now the new Azuma era is beckoning. It certainly wasn’t for the lack of onboard staff yesterday – perhaps a case of ‘too many cooks spoiling the ….’

There are still advanced purchase tickets available at just £36 return in Standard Class on the 1103 Kings Cross to Leeds and 1345 return on most days next week as I write this, so if you’ve got five hours to spare, it’s well worth the ride for that all new train experience which those journeys offer.

BusAndTrainUser – journeys around Britain by bus and train New trains in 2019 Part 4: Azumas
%d bloggers like this: