Sometimes it’s instructive to turn up at the launch of a new rail station a day late. Opening ceremonies can be tedious affairs with dignitaries descending the scene, wooden speeches, congratulatory words, smiles all round for the cameras, pats on backs, then back to their offices. The second day often has a ‘morning after the launch before’ kind of feeling where things are not quite as good as those speeches made out. 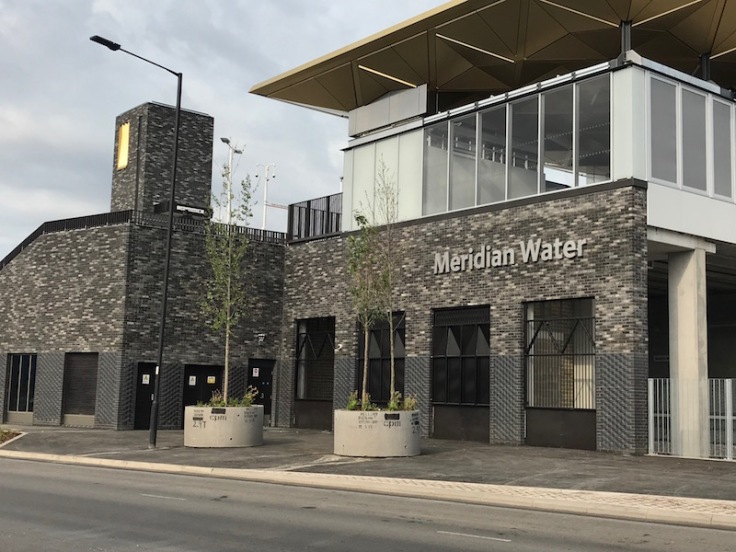 It felt a bit like that at Meridian Water this morning; that’s London’s newest station on the Stratford/Liverpool Street to Bishops Stortford line. It opened yesterday with Secretary of State Chris Grayling as the most senior person present (yes; I know!) doing the plaque unveiling honours alongside officials from Network Rail, Greater Anglia, the Mayor’s office and London Borough of Enfield.

I wrote about the background to this new station, replacing the adjacent, and now closed, Angel Road on 16th February and predicted the hoardings wouldn’t quite be taking-down ready for the scheduled opening date of 20th May. But I acknowledge just two weeks late is pretty good going for a project of this kind, so well done Team Meridian Water Builders.

And I was impressed there is a crossing point installed and surrounding footpaths have all been nicely finished – my February sceptisicm was misplaced.

The new half hourly shuttle train service from Meridian Water’s bay platform 2 to Stratford using the extra third line that’s been added to the tacks north of Tottenham Hale so as not to interfere with trains to Cambridge, Stansted Airport and Bishops Stortford on this busy two track railway, doesn’t start until 9th September so for the next three months this shiny new station will see just eleven trains in both directions spread across the morning and evening peak periods with the rest of the day, evening and weekends it being a ghost shiny new station. 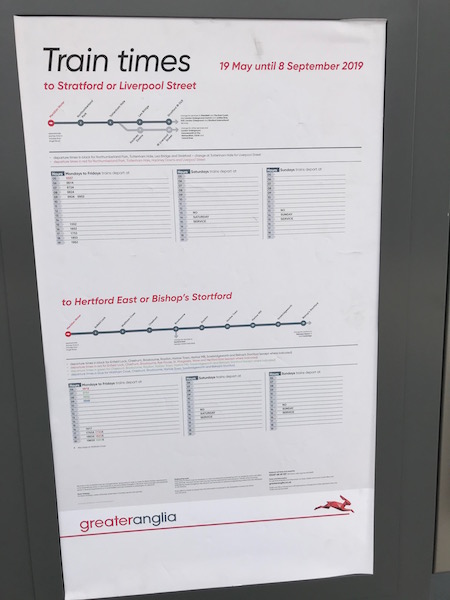 On this second morning into Meridian Water’s life, thanks to the 0517 Kings Lynn to Liverpool Street train breaking down at Harlow, the timetable on the line through the station was in complete disarray when I rolled up on the 0751 arrival from Stratford which luckily escaped the mayhem and ran as normal. The next departure back towards Stratford was at 0824 and the impressive new departure screens were all showing it also running on time so I had a handy half hour to explore the new facilities. 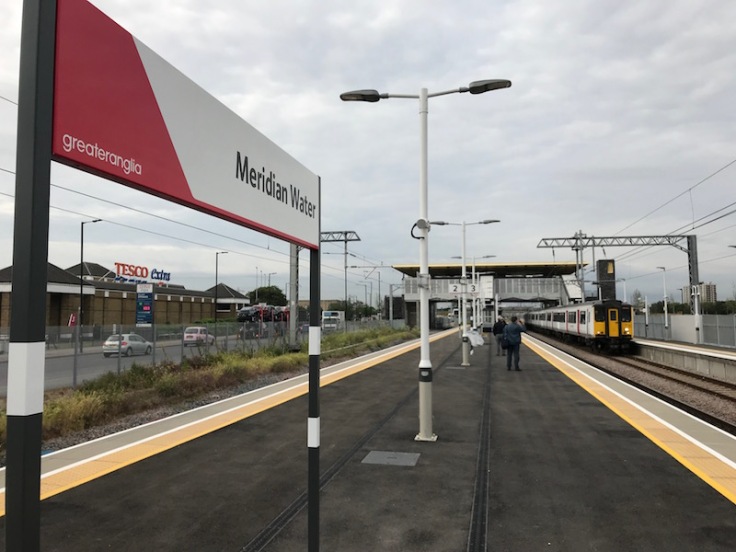 In the event it didn’t take long. The station may be shiny and new but it’s pretty basic. There’s a vast overbridge to gain access, via what can only be described as long and functional staircases, to the two platform structures with their basic shelters and seats, so aside from the lifts, it’ll certainly add to your step count if you become a regular commuter.

Oddly there’s no platform numbered 1; but platforms numbered 2 (the bay terminating platform); 3 (for southbound trains to Stratford and Liverpool Street) and 4 (trains north to Bishops Stortford). I assume the missing number 1 has been kept in reserve if ever a further platform is built for extra shuttle trains, but it didn’t look to me like there was much room to accommodate another track and platform. 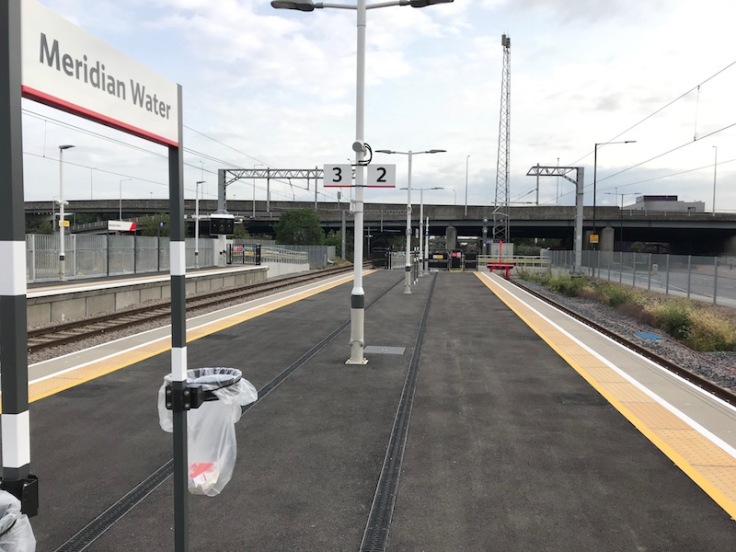 There’s no ticket office so on the overbridge there’s a bank of three ticket vending machines as well as assorted posters and departure screens. 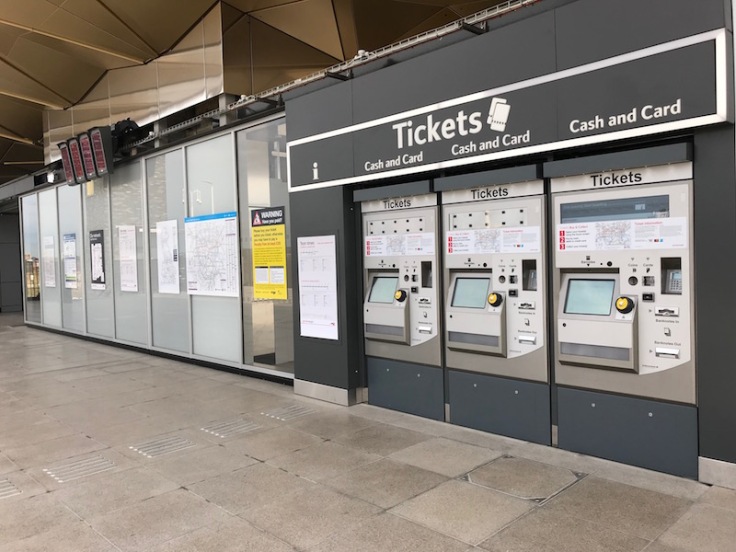 And that’s about it. I couldn’t see any leaflet racks, let alone timetable leaflets or maps to take away. The notices at the top of the stairs down to the platforms had temporary printed numbers on paper but I expect these will be replaced soon with more permanent signs. 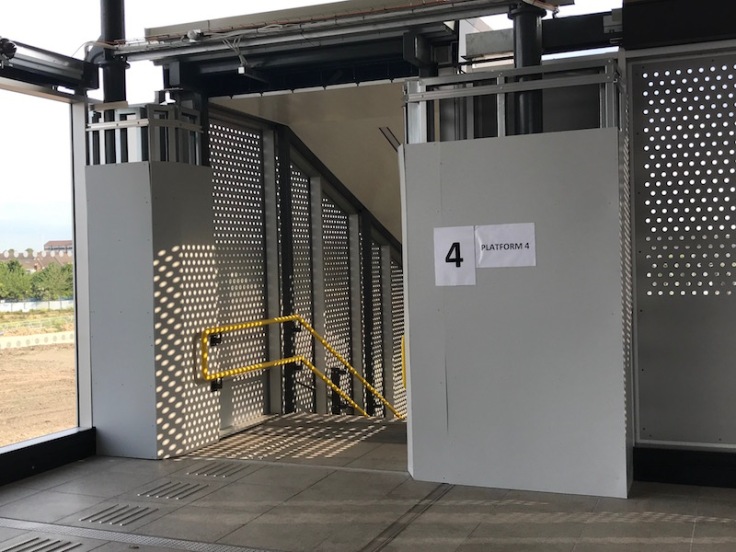 The staircase on the eastern side of the station is convenient for the Tesco Extra opposite and the western staircase currently leads nowhere as this is where a vast area will be filled with the £6bn worth of regeneration explained in my previous post.

It’s going to be a few years before streams of passengers will be climbing those staircases from their shiny new houses so in the meantime the few passengers who used Angel Road (it’s London’s least used station) and lived nearby off the North Circular Road actually now have a longer more inconvenient walk to and from their new replacement station. Following my post about Breich it’s going to be a real fight between who wins the crown for Britain’s Least Used Newest Station in 2019/20. My money’s on Breich but Meridian Water will not be far behind!

As it’s still new, Greater Anglia dispatched three high-viz wearing customer service members of staff to be on hand this morning, as you do with these things; I doubt Angel Road ever had such a privilege but that was then and this is now. 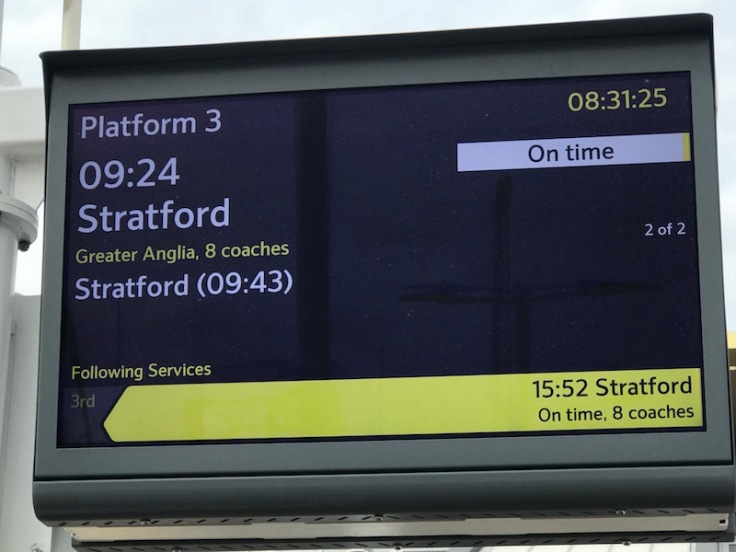 The platform departure screens ominously changed to show the next departure as the 0924 to Stratford. I wandered back up to the overbridge to see if the three welcoming staff members could help. Two had disappeared and the one remaining admitted he knew nothing about what was happening, and added the 0724 departure hadn’t come either.

The other passengers had by now drifted away to find alternative travel arrangements (there weren’t many – other than a 192 down to Tottenham Hale). Two photo snapping train enthusiasts from Ipswich decided to cross over to platform 4 and hope the 0852 to Bishops Stortford would come, and stop. It did. And they headed home, photos taken and mission accomplished.

That just left me. I didn’t fancy waiting for the 0924, thinking it might also either not appear or not stop. I’d tapped my Oyster ‘in’ on the card reader so had opened up an unresolved £8.10 journey moving my card into a negative balance so I then was unable to use it for a ride on the 192.

I’ve had happier visits to brand new stations but before leaving thought I’d take a photograph for the record of the official plaque unveiled yesterday. Except I couldn’t find it. It turns out as Network Rail and Greater Anglia packed away all the promotional pop-up banners they took down the plaque too! 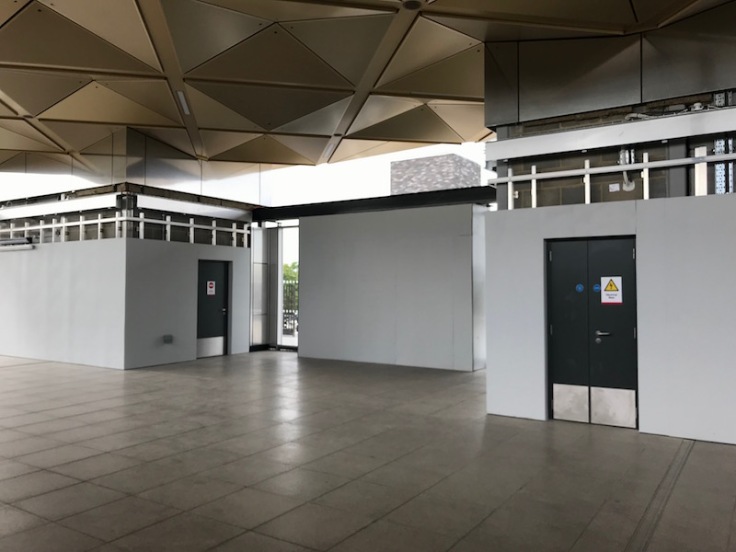 The tell tale double-sided-sellotape-come-velcro marks were still there, but no sign of the plaque.

I’m sure it will be back again one day even if Chris Grayling won’t be.

2 thoughts on “Bridge Over Meridian Water”