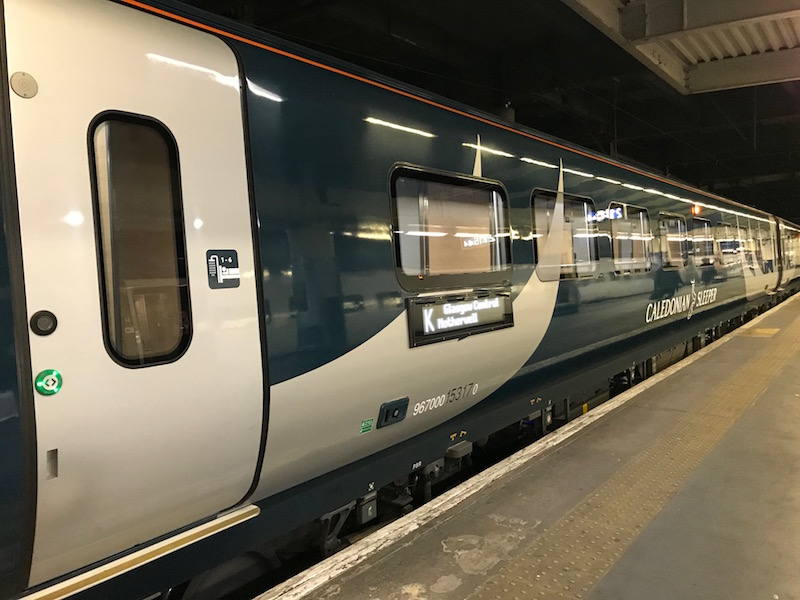 It was meant to be the grand launch night, last night.

Serco owned Caledonian Sleeper had planned to begin running their much delayed smart new Mark 5 trains on the Lowland route between London’s Euston station and Edinburgh and Glasgow from Sunday 2nd June so I bought a ticket to Glasgow a few months ago and planned an interesting day’s travels in Scotland before planning to return the following night (tonight) back to Euston.

Then Caledonian Sleeper announced the Highlander to Inverness/Aberdeen/Fort William would also launch with new coaches from the same date, 2nd June, which was really good news and with hindsight I wished I’d got a ticket on one of those journeys – Fort William on a Mark 5, just imagine.

But in the lottery that is trying to travel on Serco’s new Sleeper coaches Caledonian Sleeper brought forward the Lowlander launch with no public notice to Sunday 28th April even though bookings on their website were still for the old carriages right through until 2nd June.

As readers will know I managed to book a ticket during that first week on 3rd May and wrote about the experience in an earlier blog.

I looked into changing my tickets for 2nd/3rd June from Glasgow to a Highlander destination but decided to stick with another trip to Glasgow. This was just as well as a fortnight ago continuing teething problems with the new coaches led Caledonian Sleeper to postpone the launch of the upgraded Highlander route to ‘some time later in the summer’ with refunds now being offered to those who’d booked the super new ensuite rooms and now relegated back to old style berths.

Meanwhile I rolled up at Euston for my second new Mark 5 Sleeper experience last night ready for an earlier departure at 2134 – a couple of hours earlier than the normal 2350 departure time as we were heading up the East Coast Main Line due to ‘improvement works’ shutting the West Coast Main Line.

The Highlander was similarly affected with an earlier departure at 2028 than its usual 2115 set off time.

It’s not that the ECML is inherently longer or slower it’s that we have to still leave from Euston due to our 16 coach length needing long platforms that Kings Cross can’t offer so trains have to spend the first hour of the journey shunting up to Wembley sidings (or to give it’s official name – Wembley European Freight Operations Centre – known as ‘WMBYFET’ in the trade which incongruously even earns a place in the station listings – not that you can alight there!). 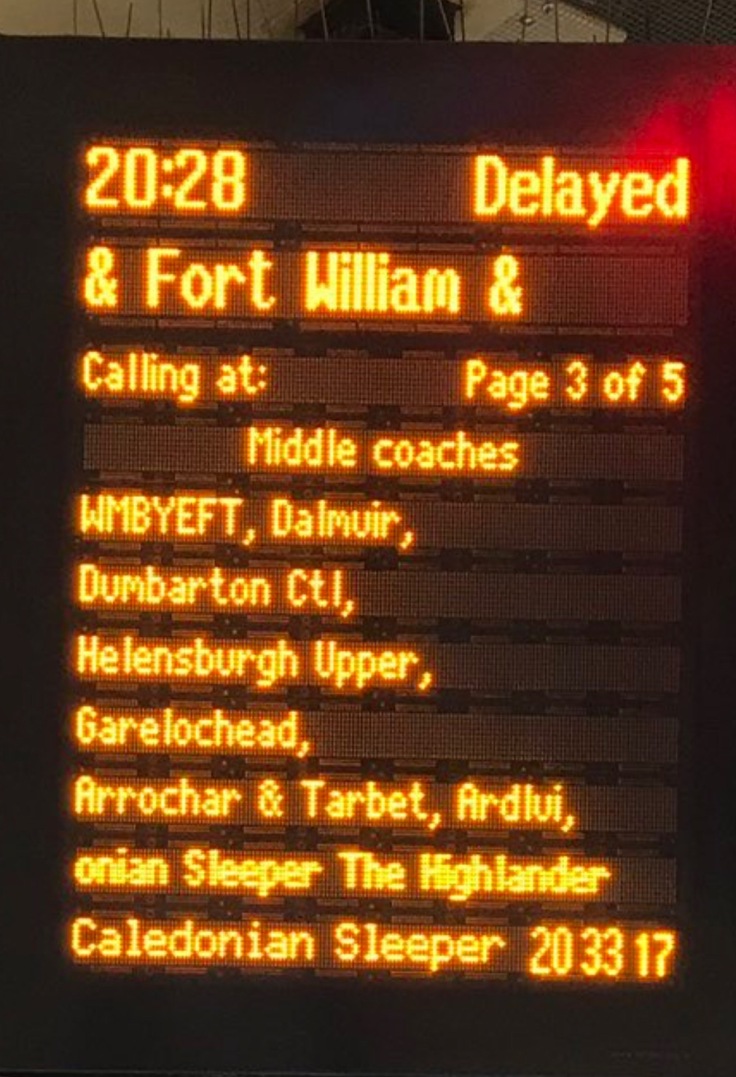 Having arrived at WMBYFET, and after a fairly lengthy pause, the train retraces its tracks back towards Euston again but branches off at Primrose Hill to reach the Overground’s North London Line at Camden Road and then an hour after leaving Euston you find yourself taking the curve on to the East Coast line at Copenhagen Junction just in front of Kings Cross station.

Except last night it all went pear shaped.

The omens were not good when I noticed the Highlander showing ‘Delayed’ but it did leave only 16 minutes late at 2144 which is in the ‘easy to make up’ bracket on such a slackly timed route.

We’d been reminded of our earlier departure by tweet and passengers arrived at Platform 15 ready for the promised 2100 access to rooms.

Except nothing happened at 2100 and the new style check in lecterns remained empty.

After a while a member of staff with a clipboard came and advised us he was waiting for the Train Manager to authorise boarding but we weren’t given any reason for the delay among much mobile phone call making by this key staff member.

To everyone’s relief at 2115 the necessary authorisation was given, the train doors were unlocked and check in began.

That late start put paid to a timely departure as check in was still underway at 2134 and not finished until 2145.

Back on board while passengers were settling in and grabbing a seat in the new and expanded lounge coach with its new and expensive (but obviously ‘locally sourced’) menu I was wondering why after a further hour had passed we were still sat in Platform 15 going nowhere.

I wandered down to the lounge car but the staff there explained they were too busy serving to even think about a reason why we hadn’t yet moved and nor did a member of staff in my carriage busily collecting up breakfast menus (still not updated for the new look Mark 5 menus) know of any reason for the delay.

I’m not sure whether the individual intercom/help buttons in each berth facilitate a general PA announcement throughout the train but none came and I decided not to disturb our obviously busy Train Manager with such a trivial enquiry as to why an hour after our scheduled departure we’d gone nowhere.

I checked the Caledonian Sleeper twitter feed but no news there either.

Just at that moment a whistle blew, the doors beeped and closed and I was relieved I hadn’t chosen that moment to wander back on to the platform as we were off.

With the benefit of hindsight I’m wondering why we were off as the 2044 departing Highlander had reached the Wembley sidings complex ten minutes later at 2055 but all was not well due to overhead power problems.

Indeed that train wasn’t on the move again for around three hours after a rescue engine had to be dispatched and there were also apparently further problems with one of the locos.

So it’s a mystery why we left when we did as presumably someone had a plan for how we wound circumnavigate the dud power cables. In the event we stopped further south than Wembley at Kilburn Park after just ten minutes into our journey at 2245 and sat there for the next two hours watching the occasional Virgin and LNWR train pass by, until finally at 0030 the Highlander passed us having been rescued and making its way south again and over to Camden Road, and we finally got going at 0051.

I’m sure it was a nightmare to sort out but it does seem to me there must have been poor communications between the ‘industry partners’ about what to do for the best and then communicate on to passengers in a timely fashion.

Following the above tweet at 2244 as we were departing, after the first hour’s delay, no more news came until 0115…

In the event, unlike the Highlander, we had the benefit of a lot of slack in our schedule and made up much of the delay. As we approached Edinburgh our expected arrival into Glasgow was given as a respectable 0730 – not too much delayed from our scheduled 0718.

Unfortunately we got held up again outside Edinburgh and then had to wait for staff to come and split the train as we continued on to Glasgow and further slow progress around Motherwell finally arriving into Glasgow Central just now at 0829 this morning – around an hour late – having had to wait for a platform as a late departing Virgin train left.

Not bad considering the three hours and more we were delayed earlier at Euston and Kilburn subsequently spoilt by slow progress since Edinburgh. But the fact we made up a lot of the delay is even more reason to give much more definitive reassurance to passengers (sorry, guests) on board about the delay – rather than nothing being said and a couple of tweets sometime later.

Finally for this post a few observations about the new Mark 5 coaches further to my report on 3rd May:

The keycard worked this time but only because I remembered how to programme it. There were no instructions accompanying or in the plain white envelope. I also asked a member of staff in the lounge car but he had no knowledge. I’m not sure how guests are supposed to know the ‘two tap’ secret – I asked another guest if they had instructions and she said her keycard too was just in a plain envelope.

The side destination panels were wrongly showing our train would be calling at stations on the West Coast Main Line – bit of a basic error that one!

The en-suite toilet flush is very noisy for your next door neighbour.

The ‘bar stools’ in the lounge car are not very comfortable – more like perch stools.

On the plus side, my shower worked a treat this time and with nice hot water too. 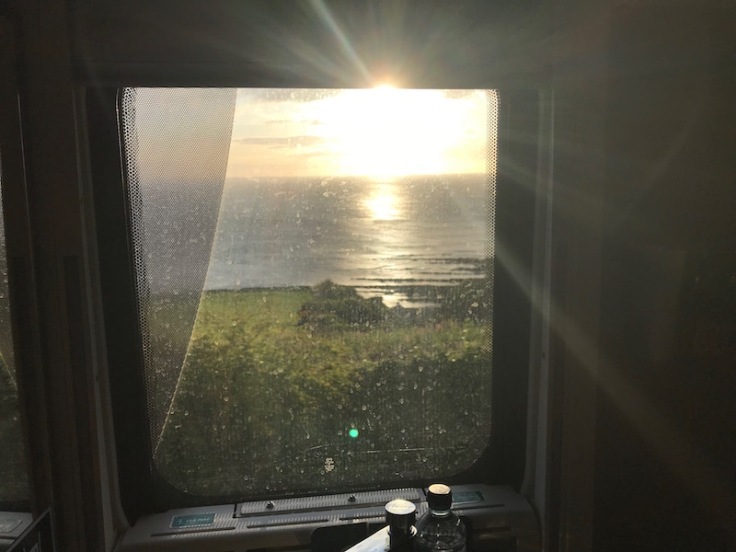 … it’s a good job last night wasn’t the grand launch night. There may still be teething problems but I’m sure these will soon settle down and the service will become a Sleeping Beauty and be much admired – if not quite yet. 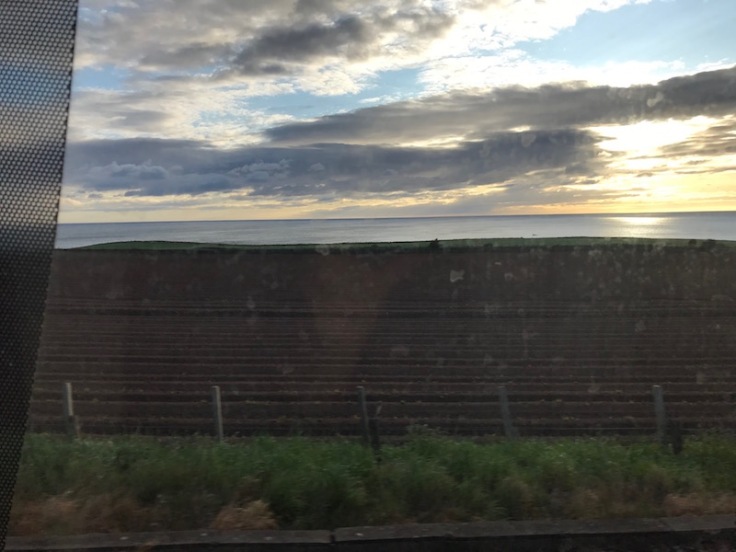 PS: I’m sure there’s a good reason but I do wonder why trains can’t ‘turn’ at Kilburn Park whenever using the ECML instead of continuing to Wembley; also seemed to me no reason to add all that extra time into the schedule. We could have left almost at the normal time last night … because we effectively did!

PPS: As we approached Glasgow just now there was an onboard announcement made apologising for the delay (’caused by a broken down train in the Wembley area last night’) but this was inaudible in the cabins.