The countdown has begun. It’s ten days until TfL introduce a swathe of bus cuts across central London beginning on Saturday 15th June 2019. Twenty-five bus routes are changing with withdrawals, frequency reductions and many altered termini. And this is only Part 1; Part 2 is promised for later in the year.

Details of the changes have been posted on the TfL website for some time and notices referring to changes to bus routes somewhat vaguely as “in 2019” have appeared on hundreds of bus stops across a wide area of London advising passengers to click on the rather convoluted website address tfl.gov.uk/PermBusChanges – surely a more catchy web address could have been used? 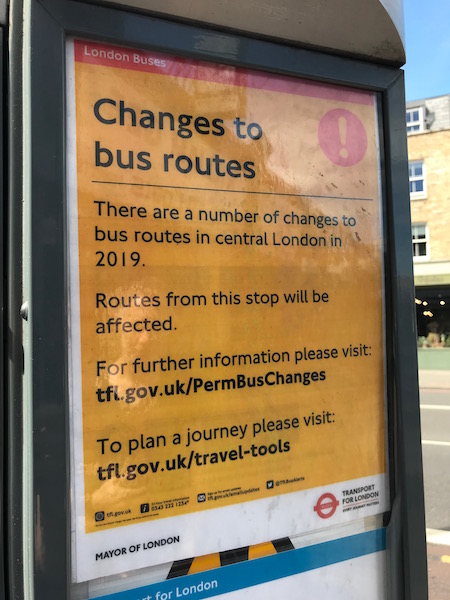 TfL’s communication machine cranked up another gear yesterday sending an email to its database (I assume it wasn’t just personally to me) advising “the way people travel in the capital is changing, so there are more buses than needed in the centre of London”. I like the positive angle (“more buses than needed”) rather than admitting less and less people are travelling by bus due to frustratingly slow speeds, congestion, less road space for buses due to cycle lanes taking priority etc etc. The explanation continues “we are working to reduce bus-on-bus congestion, to help improve reliability and make it easier to travel”.

These are odd strategies to be pursuing; most provincial bus companies are increasing the number of buses to improve reliability and make it easier to travel, but TfL seem to reckon running less is the answer.

I had a ride a few days ago on many of the routes being cut back to see what the impact will be. 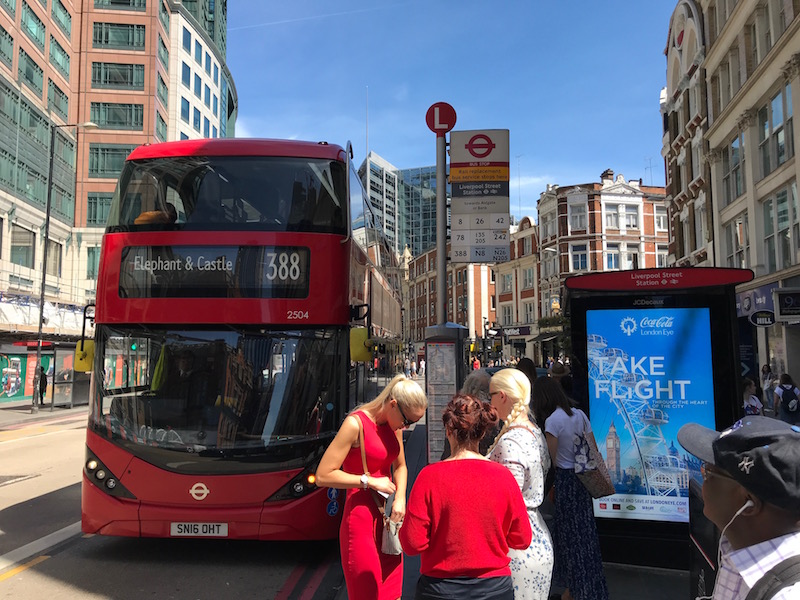 Highest profile frequency reductions in Blackfriars Road, Farringdon Road and Kingsland Road are being achieved by cutting back bus routes to termini located south and north of these roads. 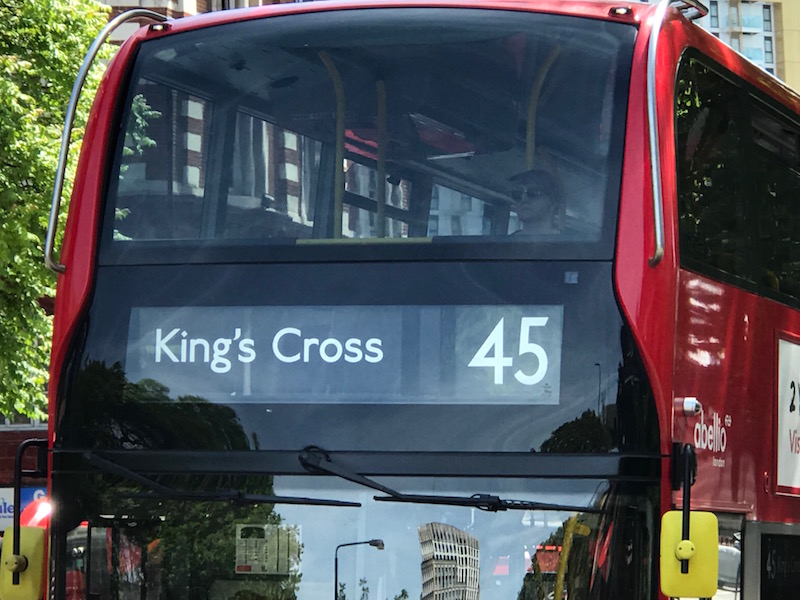 For example, Blackfriars Road says goodbye to routes 45 (no longer running north of Elephant & Castle to Kings Cross) and 388 (no longer running south of Liverpool Street to Elephant & Castle) leaving just route 63 and a newly rerouted 40 to Clerkenwell Green instead of Aldgate. In practice this means a combined frequency of around 15 buses per hour instead of 20. Part of the 388 route cut back involves Queen Victoria Street (where it’s the only route) which is covered by a rerouted 4 terminating at Blackfriars instead of Waterloo; so in turn leaving Fleet Street and Waterloo Bridge to other routes. 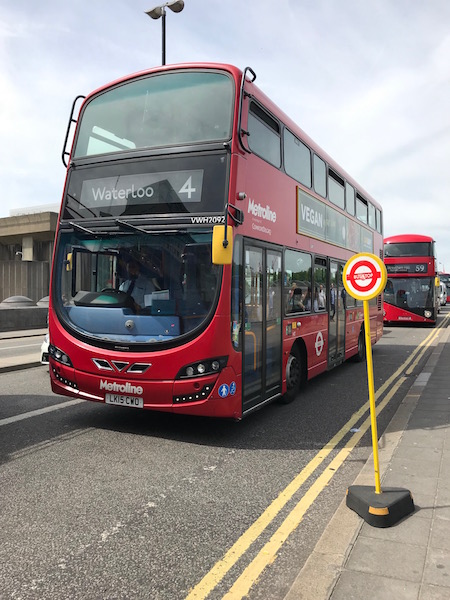 Farringdon Road also says farewell to the 45 meaning only the 17 and 46 will link Chancery Lane to Kings Cross with 13 buses per hour instead of 19. Kingsland Road south of Dalston Junction loses its six bus an hour route 67 but still leaving around 24 buses an hour on the 149, 242 and 243.

From my journeys and observations along these roads the reduced frequencies will ably cope with the numbers travelling although buses will naturally be busier, in some cases uncomfortably so, and unattractive longer waiting times can be expected – not so much making it “easier to travel” but reducing costs and trying to keep the revenue. 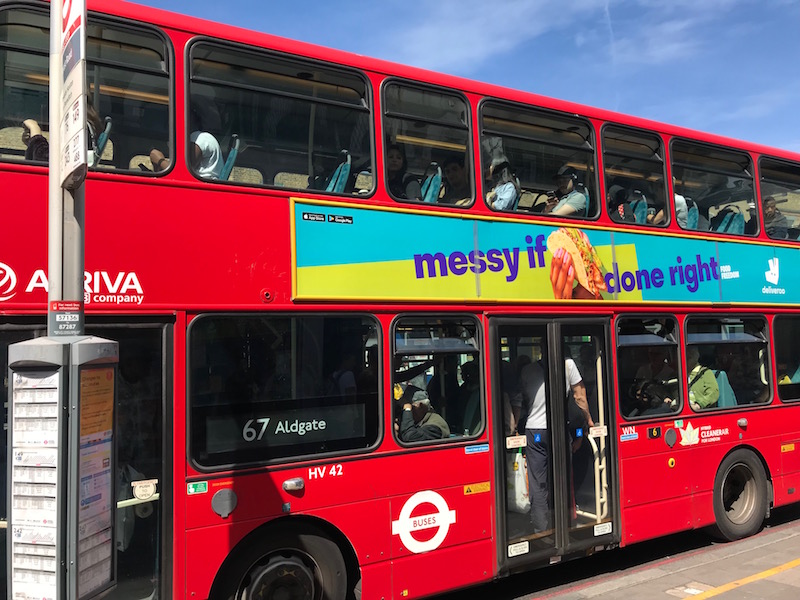 The busiest bus I spotted while on Kingsland Road south of Dalston on route 67 still had some empty seats on board on the upper deck. 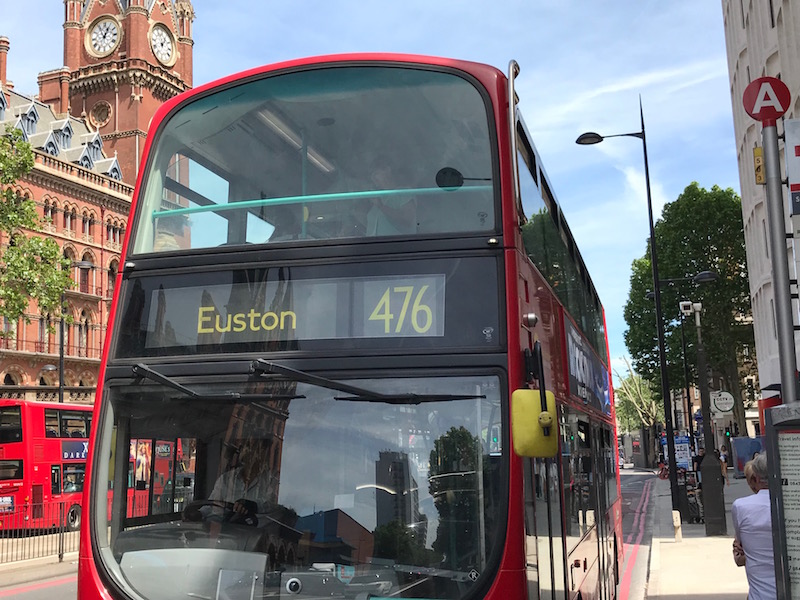 Another slim down is between Kings Cross and Euston where the 476 is being cut back from Euston to turn at Kings Cross from the east while the 59 does the opposite being cut back from Kings Cross to turn at Euston from the south taking out roughly 17 buses an hour linking the stations; but there are still plenty of buses on routes 30, 73, 91 205 and 390 along Euston Road so for those choosing not to walk, and I always do walk, the wait shouldn’t be discernibly longer.

Another slim down is between Elephant & Castle and Holborn due to the 171 being cut back to the former from the south, but alternatives are provided by the 68 as well as many other buses on parts of that route.

In the recently made two-way Tottenham Court Road, the 134 is cut back from the north to turn at Warren Street at the top end while the 14 from the south is diverted to Bloomsbury to turn at Russell Square leaving Tottenham Court Road to the 24, 29, 73 and 390. They’ll cope, but the fact is if your journey was from say, University College Hospital, where buses on the 14 used to begin their journey, to South Kensington your option will now be taking another bus down Tottenham Court Road and then change on to the truncated 14. While the Hopper Fare means no increase in price, changing buses certainly comes at a price of time and inconvenience and far removed from that spurious claim of making it “easier to travel”.

There’s a lot of termini swapping going on as TfL juggle its stand space around. So, for example, with the cut back of the 67 from Aldgate to Dalston Junction, the 242 swaps its St Pauls terminal over to Aldgate (and replaces the 67 through Spitalfields) and the 100 steps into the terminal stand at St Pauls instead of the Museum of London. The 172 leaves Clerkenwell Green for Aldwych, while the 40 leaves Aldgate for Clerkenwell Green. The 341 moves from County Hall to Waterloo as the 53 cuts back to County Hall from Whitehall where it’s replaced by the 3 instead of continuing to Trafalgar Square. The key to many of these minor terminal cut backs and shuffle rounds is they save valuable vehicle and driver resource which will all add up in handy savings towards TfL’s deficit – and that’s what these changes are really about rather than anything to do with “bus-on-bus congestion” and “making it easier to travel”.

Finally the biggy; the complete withdrawal of the high profile tourist route, the Tower Transit operated RV1 first introduced in April 2002 which runs from Covent Garden, across Waterloo Bridge, around the South Bank along Upper Ground before gliding close by Tate Modern then London Bridge and Tower Bridge to terminate at Tower Gateway. Six buses run this least frequent central London bus route every 20 minutes (cut back from every 10 minutes in February 2018); and they’re not ordinary buses either, they’re the original hydrogen powered buses introduced in 2010/11 as well as two later Van Hool buses.

TfL reckons it costs about £3.3million each year to operate the RV1; quite how six buses doing minimal mileage on a fairly easy route around central London can cost that much is a mystery to me. With revenue of around £650,000 it means a loss of a whopping £2.6million. Apparently the premium for using hydrogen buses is not that great a percentage of this huge loss either. The busiest point on the eastbound route is  on Tooley Street with 15 passengers on the bus in the morning peak while westbound in the evening peak there’s twenty on the bus in Southwark Street. On my journeys I saw around a dozen people on off peak journeys in the South Bank and London Bridge area.

Some peak passengers may find the newly extended 343 from City Hall across Tower Bridge to Aldgate might help but off peak, passengers will pretty much be abandoned, but at £4 subsidy per passenger journey for a central London bus route, financial reality has caught up with the RV1. 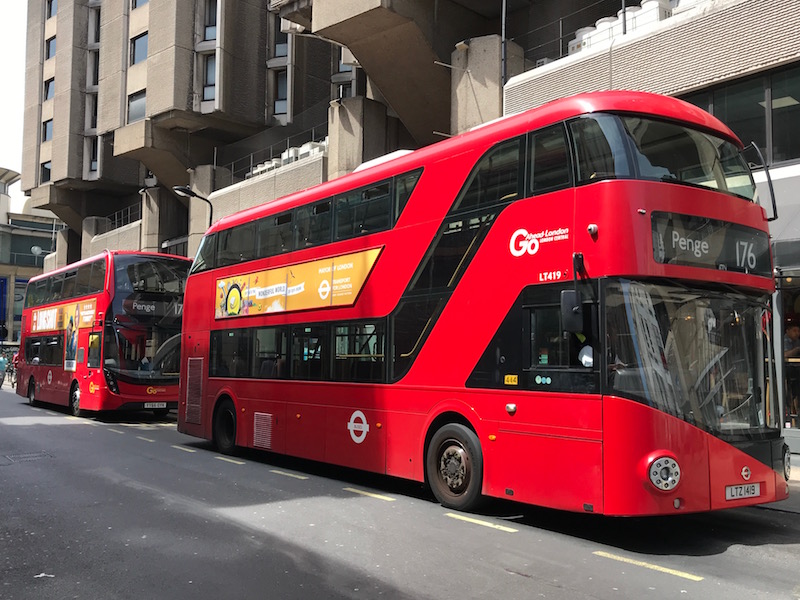 One interesting aspect of the upcoming changes is what will happen to surplus New Routemaster buses if they’re cascaded to other routes leading to mixed allocations.

This has been the case on route 176 between Tottenham Court Road and Penge where Go-Ahead London’s Camberwell garage mix up New Routemasters with standard ADL Enviro double deck buses meaning passengers need a fleet list with them to work out whether they can board through the centre doors or not! Quite bizarre.

As the ten day countdown continues to the Saturday 15th June changeover date it will be interesting to see whether TfL’s roadside infrastructure team can cope with the huge scale of changes. There must be hundreds of bus stop flags as well as timetable displays to update across the network and also all those hundreds of spider maps spreading their web across a vast area.

Some spider maps showing the changes are embedded into TfL’s website if you click in the right place, but they’re not exactly easy to follow and understand. I’ll be keeping a close eye on whether these maps are updated and placed in the correct section of the website as well as in bus shelters on the 15th June.

Commendably Mike Harris has already updated his excellent (and the only available) London bus map and this is an easy way to see what is changing by comparing a before and after extract.

Mike’s edition no 38 valid from 15th June will shortly be available in print for £2 but the electronic version at the bargain price of just a £1 is available to buy and download now and I strongly recommend visiting his online shop and buying a copy. It’s invaluable when travelling around London – and huge thanks to Mike for his excellent map work. Mike definitely does “make it easier to travel”.

3 thoughts on ““Easier to travel” … with fewer buses.” Leave a comment ›

BusAndTrainUser – journeys around Britain by bus and train “Easier to travel” … with fewer buses.
%d bloggers like this: