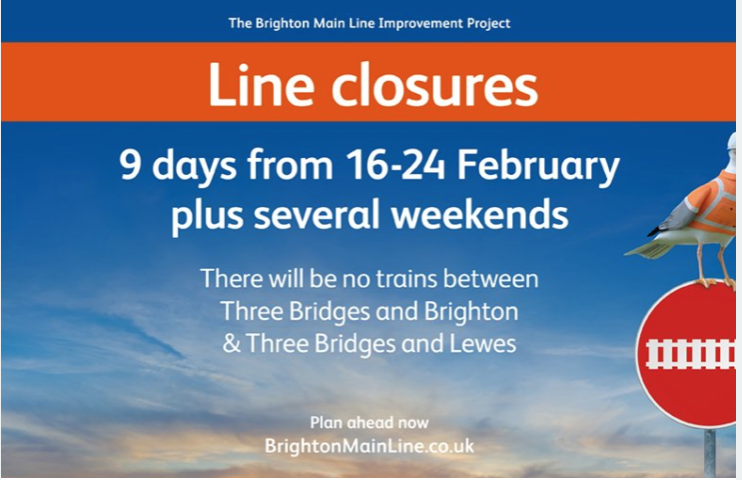 It’s been publicised for over a year; preparations have been going on behind the scenes for much longer than that. It was originally planned to happen last October. Now we’re finally on the cusp of the biggest rail replacement ever as the nine day Brighton Main Line closure is hours away from its first real test. Tomorrow, Monday, heralds a five day working week with no trains on one of the country’s busiest commuter main lines between Brighton and Lewes and Three Bridges.

Weekend closures are nothing new for Brighton line commuters south of Three Bridges. Thirteen of the eighteen weekends between 5/6 January and 4/5 May 2019 are marked down for closures to some extent. Weekend leisure travellers are well used to bus replacements or long detours via Littlehampton over the last few years. But this is the first time regular weekday commuters will be hit with journey times to London typically more than doubling from around an hour to two and a quarter hours or more.

The original plan was to close the lines in two school half term weeks, last October 2018 as well as February 2019, but after the May 2018 timetable meltdown rail top brass realised that a level of disruption of such scale coming weeks after a summer of chaos and cancellations would break the resolve of even the most hardened Brighton commuter. The October closure was scrapped and replaced with additional weekend closures.

With reliability returning to the line during the late summer and autumn and more journeys added back to the timetable in the December 2018 change, it was felt, not unreasonably, that the February half term shut down should go ahead.

The work is being promoted as part of the Brighton Main Line Improvement Project which was bequeathed £300m by the Department for Transport for a ‘Thameslink Resilience Programme’. This particular work is grabbing £67m of that pot and will see tunnels relined to prevent leaks, signalling upgrades, replacement and upgrades of conductor rails, shoring up cuttings and embankments, fence replacements as well as deep cleans at the closed stations.

The Project team are regularly tweeting photographs from up and down the line of the vast orange army hard at work already, just in case any of us were wondering what was going on. Expect the rail industry PR machine to be in overdrive over the next week with more amazing statistics of what’s being achieved. I can’t help having a cynical smile at the use of language for projects of this kind. If I get an engineer in to fix a new part to my washing machine, I don’t call it ‘improvement works’ I call it a repair. The norm should be a railway that works properly. It shouldn’t be a case of ‘improvement works’ to reach that status. I’m sure I’m not alone in thinking after a nine day closure as well as umpteen weekends of disruption I don’t just want to know that the advertised service is now ‘improved’ as in it’s going to be as it should be anyway. I’d have preferred ‘improvement’ to mean having more trains and better comfort on board. These are what we used to call ‘engineering works’.

But you can’t argue with the concept of a nine day closure being better than having countless weekends of disruption throughout the year (although it seems like we have close to that anyway) and I can see the logic in ‘blockade management’ for efficient completion of the work. And it makes sense to choose half term week.

So what can we expect tomorrow?

Having had a look round the Three Bridges Bus Hub (to give it its technical name) today I must say I’m mightily impressed. GTR and Network Rail have definitely pulled out all the stops (well actually they’ve put a number of stops in – and all clearly labelled too! More on that shortly). Chastened by appalling publicity for weekend rail replacements which went disastrously wrong between Redhill and Gatwick Airport last year with insufficent buses and staff, this time round there won’t be problems because of a lack of resources. There are high viz wearing ‘helpers’ and buses and coaches everywhere. 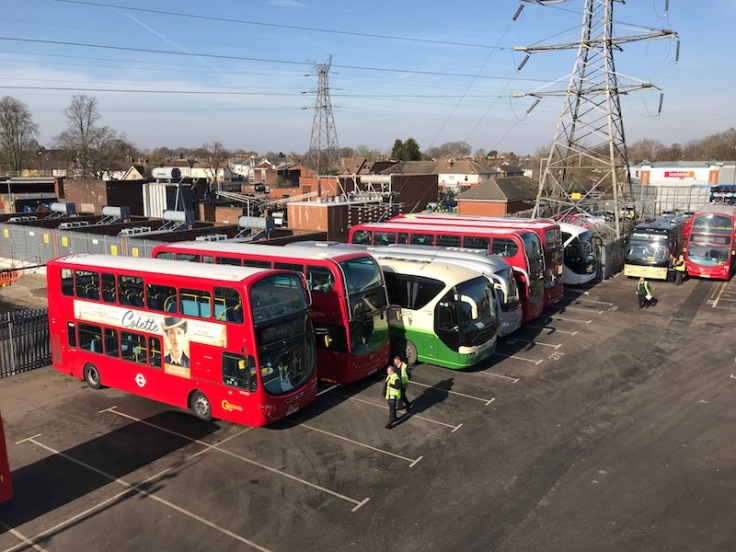 The numbers tell the story. Around 250 buses and coaches, 500 bus drivers and control staff and an extra 300 temporary agency staff have been hired for the duration. That’s bigger than the whole of Reading Buses as a bus company, for example.

The Three Bridges Bus Hub is an impressive bus station under a substantial marquee with seven bus stops and an extra one spare and all departure points are clearly labelled with destinations served. 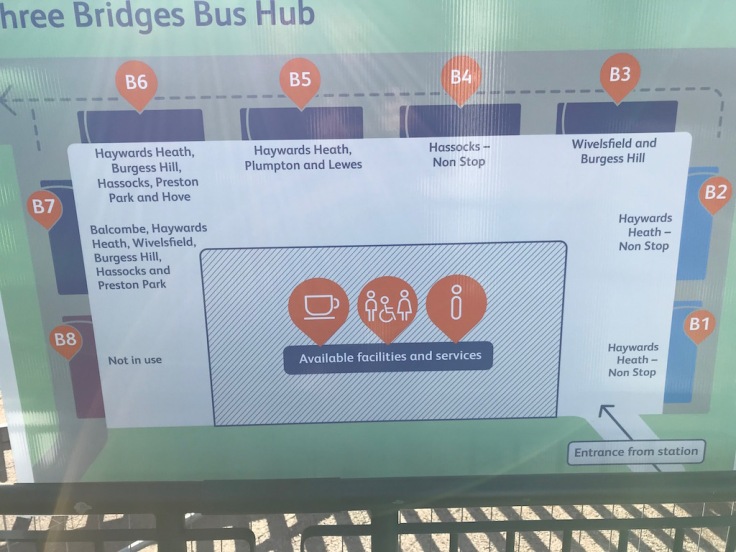 There’s seating, toilets and a refreshment area. There’s a counter with activity books for children and free giveaways for adults. There are staff aplenty to guide you every step of the way. And they were all smiling and looked to be enjoying their work. 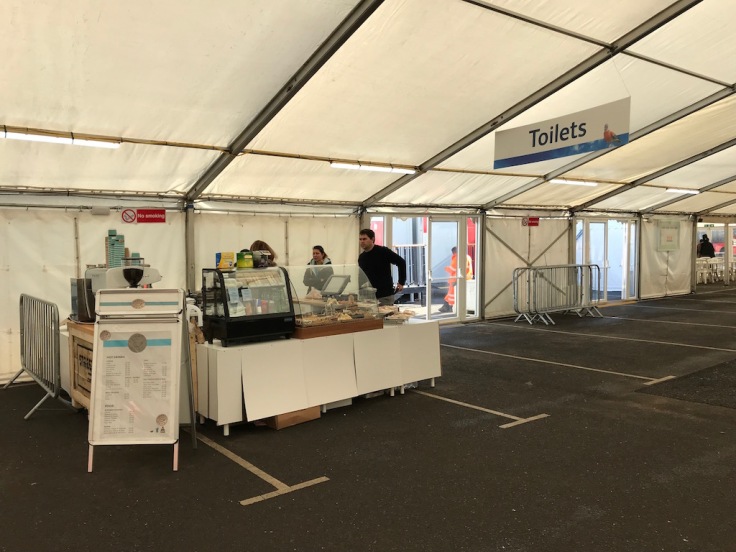 A footbridge and covered walkway has been constructed to take passengers leaving trains and heading for bus connections over the roadway to avoid bus and pedestrian conflict, but if flat crossing is needed, there are marshalls on hand to help. I spotted staff happily carrying bags and suitcases for passengers.

There was even a police presence outside the station directing traffic. Yes, I know! Well, actually they were preventing ‘kiss and drop’ passengers clogging up the normal bus stop right outside. 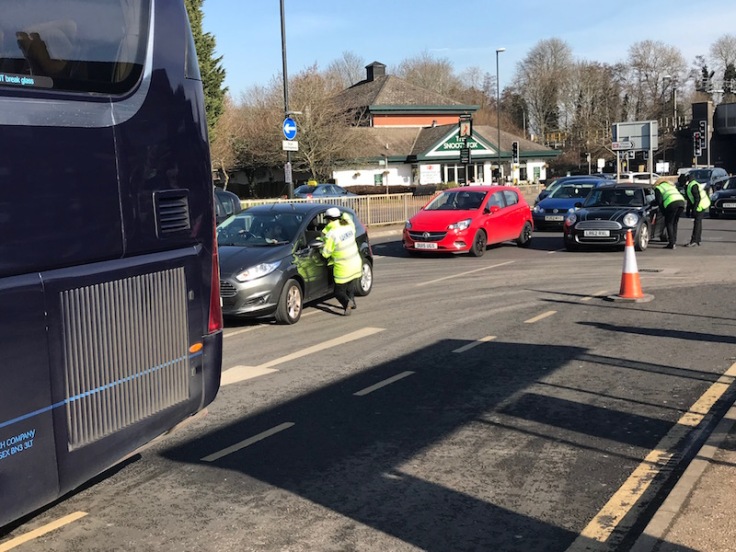 Rather ominously as you enter the walkway to the footbridge and over to the marquee you’re greeted with “queuing time” posters and the first one warns of an hour’s delay! Crikey, I really really hope tomorrow doesn’t see that contingency being needed. 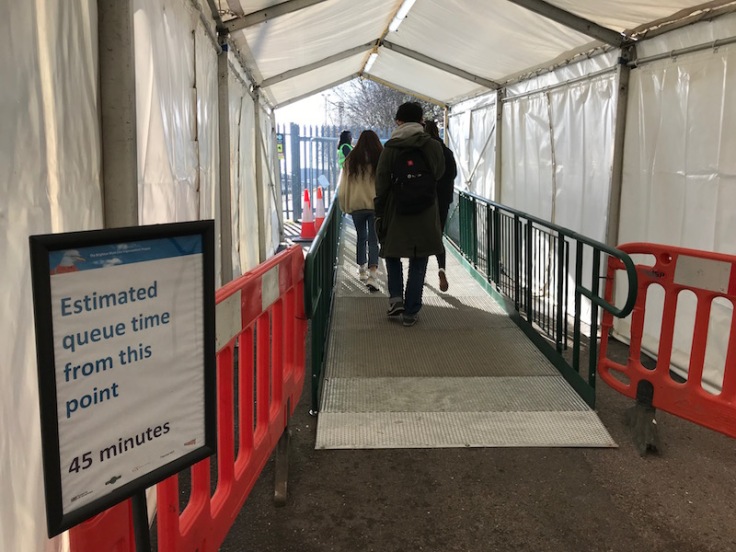 Much thought has obviously gone into planning the replacement bus routes, but the planners seem to be following a principle of lowering expectations and aiming to over deliver. That philosophy works in normal business but I’m not sure it’s the best policy at times of serious disruption to the norm. For example, Twitter was alive on Friday with complaints there are no fast buses between Brighton and Three Bridges. And the publicly available information indeed confirms this as being the case. But behind the scenes there are fast buses, it’s just that they’re trying to encourage Brightonians heading for Gatwick Airport, East Croydon and London to use the diverted trains via Littlehampton and the associated extended journey time, rather than over filling the buses up the A23.

There’s a logic to this, as you can’t possibly replicate the capacity of a Class 700 Thameslink train or a 12 coach Class 387 Gatwick Express leaving Brighton at 7.30am with the same capacity on buses and coaches. Spreading the load is a good idea. But I do think it would be better to be honest with passengers, as they’ll soon find out the options and realise fast buses are running, and will probably be a quicker option and act accordingly and be scornful of the lack of clear information.

For my own home station, Hassocks, there are no fast buses advertised to Three Bridges yet there are, as you discover when you get to Three Bridges. It’s inconsistencies like this which annoy people. 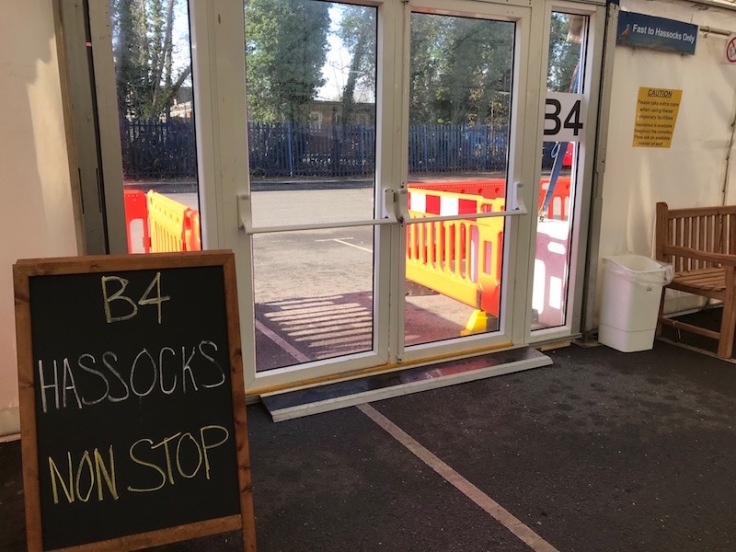 Posters at stations advising of journey times are helpful, but again they’re giving rather pessimistic times compared to what reality will be. It’s also a pity such posters weren’t available weeks ago, rather than just appearing on Friday. We’ve been told to “plan ahead” by on train announcements played out every hour for the past six months yet how could you have properly planned ahead without such vital information as journey times?

My other bugbear is the lack of compensation for passengers. There’s a section at the back of the comprehensive ‘Employee Handbook’ given to the hundreds of staff involved in the project called ‘Delay Repay’ which states coldly “There will be NO ADDITIONAL COMPENSATION for customers” (yes, it’s even in block capitals). This is a poor show. GTR must be receiving compensation as part of its management contract from the DfT for the extra costs being incurred during this period. The many bus and coach companies involved in providing the 250 replacement vehicles will all be making a profit margin. The coffee and tea vendors, the marquee providers, the footbridge installers, the agency staff providers, the contractors for Network Rail, all the suppliers of the equipment being used to replace track, signals, tunnel roofs and conductors rails, the sub contractors, the sub sub contractors will ALL be making a nice tidy profit over these nine days. Yet the passengers – the ones who are actually being inconvenienced going about their daily lives – get nothing. We’re not even allowed to use the cheaper Thameslink ticket on a Southern train arriving at Three Bridges after an hours additional journey only to find it’s that brand and colour of train that’s departing first. This really is shameful and penny pinching on a £67m project.

It would have done wonders for goodwill if a token five per cent price reduction had been introduced for the week, or a flat £1 off ticket prices from stations affected plus some reimbursement for season ticket holders.

As it is it will only be the most hardened commuters who I suspect will be out tomorrow. The talk on the platforms and trains last week was of people taking the week off, working from home or staying up in London for the duration. I wouldn’t be surprised if it ends up quieter than a Christmas to New Year period and many of those buses and coaches, some of which have come all the way from the Go-Ahead Group’s Gateshead based bus company, Go North East, will not all be needed nor will queueing times stretch back to that 1 hour mark!