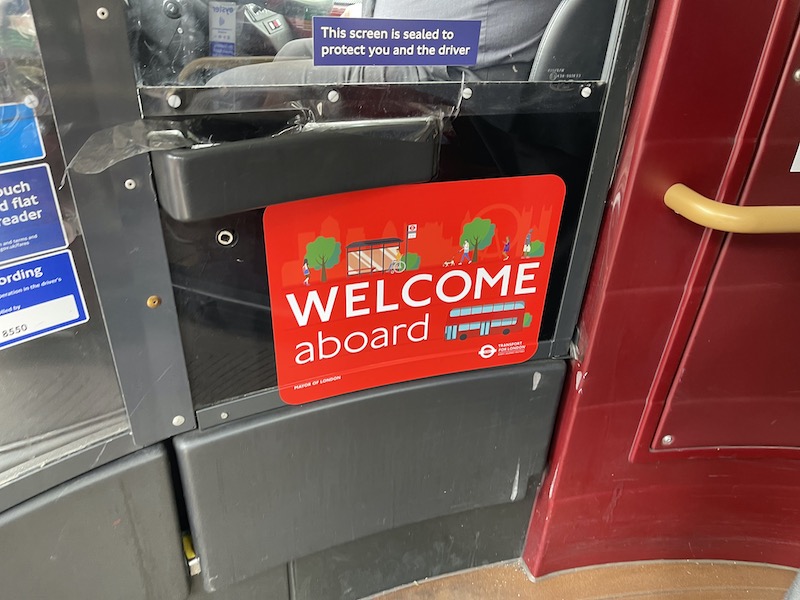 This month’s pot pourri of observational miscellany from recent travels.

Greater Anglia has invested in an impressive new fleet of trains including the rather nice Class 745 which offer first class seats on the Norwich to Liverpool Street service. A problem arises when one of these trains is unavailable and substituted by one of the same class but as used on the Stansted Express which aren’t fitted with first class, nor tables.

It happened to me one day last week and I was given a little printed card by the Train Manager with details of the journey and a reference number “to claim your refund for the difference in fare” involving going online and scanning the card and ticket with a completed form to GA’s customer service team.

I had a dilemma about doing this, as the advanced first class fare I bought online from GA’s website the day before travel for only £19.80 (with Railcard) was actually around £3 cheaper than the standard class advanced fare, so I was a bit worried I might get surcharged rather than refunded.

But I’m always up for a ticket reimbursement challenge so submitted my form and attachments as instructed only to receive a reply saying I needed to upload an image of my “defaced ticket” before “a refund of the difference between our Standard and First-Class fare for the affected leg of the journey” can be made.

The instructions hadn’t included anything about defacing the ticket and bearing in mind it’s a one-off advanced journey specific ticket, this seems just an unnecessary bureaucratic requirement. Anyway, I duly complied and by return received confirmation I was entitled to a refund of £4.95 and it would be paid into my bank account in “up to 14 working days” which just goes to show it’s always worth pursuing these things, even if there seems to be no logic to how refunds are worked out or advanced tickets are priced.

Meanwhile over at GWR I haven’t received such speedy responses, which sadly is all too typical of the (contracted out) customer service function at that company; GWR don’t want to deal directly with passengers. I claimed a refund for the tickets I was unable to use on Saturday 2nd October (and the days either side) for my trip to Cornwall that weekend, when I had to resort to driving to Truro due to the rail strike. I filled in a claim form online in advance of the date of travel on 22nd September receiving an acknowledgement that day. After 10 days, on 2nd October, I received another auto-generated email expressing “apologies for the delay in processing your claim that we received on Thu, 22 Sep 2022. We are currently experiencing high volumes of claims which is preventing us from assessing your claim as quickly as usual.”

On 10th October ‘GWR Customer Support’ emailed me “to be able to assess a claim fully we need complete ticket information. Unfortunately, the ticket image you provided was not cut in half. We will re-evaluate your claim if you can submit a new claim, providing an image clearly showing your ticket cut in half.” which I did the same day receiving an acknowledgement by return. After 11 days, yesterday, I received another auto-generated email expressing “apologies for the delay in processing your claim that we received on Mon, 10 Oct 2022. We are currently experiencing high volumes of claims which is preventing us from assessing your claim as quickly as usual.”

I’ll update you on how this progresses in next month’s ‘Seen around’.

It’s not often you find anyone sitting behind the “speak here” glass screens at Information and Assistance points in TfL’s bus stations, but on a recent visit to North Greenwich I did just that. Which was a nice surprise.

My eye was caught by the ‘next train’ sign photographed below at Shepherd’s Bush Overground station which shows details of the next four trains in both directions together with an indication of expected capacity. (My photograph doesn’t do justice to it, I think the wonky lines are to do with the digital nature of the screen – you don’t see them in practice).

The one thing it does is show the number of minutes before the next departures rather than the actual time which resulted in an interesting debate with my friend Geoff, who I was with, as to how helpful this is.

I see buses on TfL routes now have a bright red ‘Welcome’ notice fixed to cab doors. Nice to see a more positive welcome than the previous more officious messages.

It’s always a pleasure to visit Nottingham by train and see the great displays in the foyer about onward travel by bus but I was a bit surprised on my recent trip to see the leaflet racks are now in the outside hall some distance from the real time departure screens.

It seemed to work better when everything was together. And also, next time I hope there will be an improved selection of timetable leaflets including Nottingham City Transport’s and TrentBarton’s networks,

I was impressed with the layout, airiness and cleanliness of Newark’s bus station on a recent visit …

… and all the more so for its manned information window.

Travelling out of High Wycombe towards Wycombe Marsh and Loudwater I spotted this timetable display on a bus stop which looks like it’s a digital display. I couldn’t really see from the bus but it looks worth investigating further to see if this is something that might be a useful development for the future.

It’s always good to see promotion of branded railway lines – often the work of active Community Rail Partnerships who have the benefit of funding from the DfT and train companies. These posters were spotted on Ely station platform. If only a similar concept – Community Bus Partnerships existed.

It’s very fitting to see the statue recently unveiled at Marylebone railway station of industry legend Adrian Shooter renowned for his inspirational leadership of Chiltern Railways until his retirement in 2011.

On my recent journey on TfL’s route 123 I was impressed by the courtesy shown by the couple in the front nearside seat who occupied themselves on the long journey from Ilford to Tottenham High Road by listening to music on a smartphone through sharing the earphones, while the woman in the offside seat to the right had a conversation with her friend on loudspeaker so we could all get annoyed by having to hear it on full volume. Why do people do that?

If you go to South Western Railway’s website there’s a page telling you all about “our brand-new fleet of 90 trains set to transform travel on our reading, Windsor and West London suburban routes”. The Arterio fleet built by Bombardier in Derby has involved “investing a massive £1 billion in a new fleet of trains which offer more capacity, quicker journey times and better reliability and punctuality for our customers.”

The only trouble is, they were originally due to start running in 2019 but were “unveiled in August 2020 during a special event at Wimbledon depot” and since then have been stuck in sidings including some at Clapham Junction where they tease SWR’s passengers who can see them from the over-bridge while being crammed into old rolling stock which should have been replaced by now. There’s no official explanation of the continued delay at introducing the trains into service, but that’s the rail industry for you.

Passengers carrying hordes of luggage are a big issue on rail these days. The invention of suitcases with wheels changed the dynamics some years ago. I’ve seen people wheeling four large suitcases (two with each hand) as well as having other bags around their shoulders and balanced on top of the suitcases.

The National Conditions of Carriage for Luggage state “you may take a single item of hand luggage that must be capable of being held in your lap if required, plus up to 2 items of luggage each not exceeding 30 x 70 x 90 cm in size.” Lumo’s conditions limit passengers to just one large item. It wasn’t clear whether the woman below, spotted at Victoria Underground station, was continuing her journey by train!

Why is it whenever I travel with east Midlands railway the train exteriors are absolutely filthy? This has being going on for years. The first photographs here are from 2020…

…. but my journeys since then, including this week were just as bad. Does the company not want its passengers to see out of the window? Has it not got a train washing machine?

While travelling from Mallaig to Fort William in the early morning a few weeks ago we were heading directly into the sun as it rose in the east so the Shiel Buses’ driver of the high floor bus/coach obviously lowered the sun visor to protect his eyes.

The only snag with this is, it blocks out the forward view for all passengers. It would be good if manufacturers could come up with a solution to this – couldn’t the top part be translucent?

Another bizarre station announcement at Hassocks station the other day. “Passengers are advised this train may be delayed after Burgess Hill due to a problem under investigation between Horsham and Three Bridges”, which for those unfamiliar with Southern railway geography is a complete nonsense. Burgess Hill is the station immediately north of Hassocks and further north on the Brighton Main Line comes Three Bridges with Horsham located south west of that on another line altogether (the Arun Valley line). Whatever the “investigation” into the “problem” came up with it wouldn’t impact my London bound train from Hassocks. Yet more irrelevant ‘noise’.

And to finish off, here are this month’s Seen Around Awards

Award for the Most Imaginative Bus Stop Name

Stagecoach have named bus stops on their routes in Cambridgeshire with many using names of roads, pubs or other landmarks to identify the location. Perhaps no-one was quite sure what the name of this church is to include on the bus stop plate.

… by destination in a random order…

… with absolutely no logic to the presentation at all, but a member of the local bird population has left its mark, and watch out for a YouTube video featuring it.

And finally for those who like a ride on a vintage bus, I spotted this in Biggleswade yesterday advertising a commemorative service running half hourly on Sunday week (30th) to mark the end of an era when Stagecoach end their involvement in routes 72/73 between the town and Bedford via Sandy.

But the good news is local family owned Grant Palmer are taking over the route and have already got posters up all along the route reassuring passengers it will continue and the new timetable is available online and will also be available in printed leaflets.

37 thoughts on “Seen around”