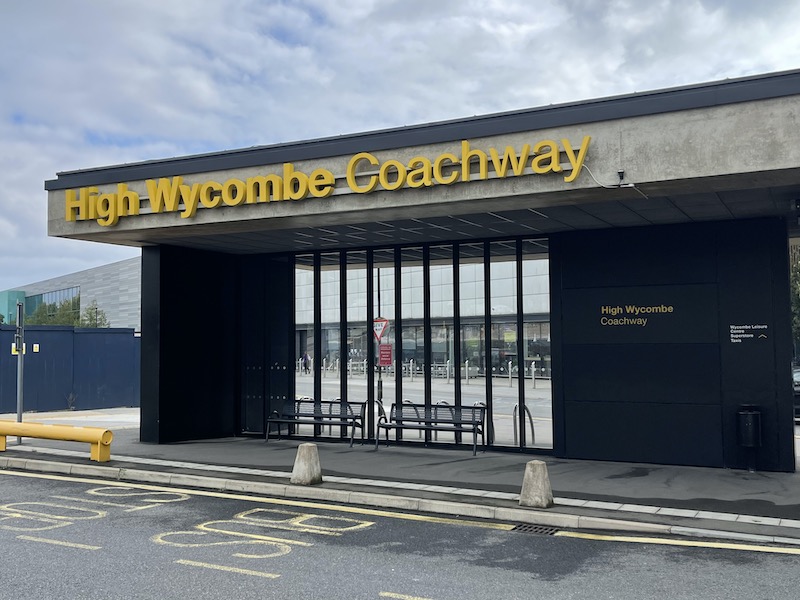 I was back in High Wycombe again last Friday. Checking out Carousel’s route 34 before it’s demise yesterday being replaced by Buckinghamshire Council’s new DRT scheme for the town which begins today. I’ll tell you more about that on Thursday.

Route 34 looks to have been one of those bus routes funded by Berkeley Group, the housing developer, under Section 106 payments and I suspect their financial contributions will be going towards the new DRT too.

The hourly bus linked the bus and railway stations via London Road and an area called Wycombe Marsh to a new housing development being built by the Berkeley Group called Abbey Barn Park. It’s a “new community nestled in a tranquil countryside setting, surrounded by woodlands and a 34-acre country park, a short distance to High Wycombe town centre and station with London Marylebone accessible in just 26 minutes as well as outstanding education with a range of excellent schools nearby”.

And, until yesterday the luxury of an hourly bus service but from today an exciting new DRT service with a bus whenever you want to travel (ahem!).

After Abbey Barn Park, route 34 continued on to High Wycombe’s Coachway conveniently sited alongside a giant Waitrose and Park & Ride car park next to junction 4 of the M40, but not quite so convenient for bus passengers, it having few homes nearby.

I’d taken a ride out to the Coachway/Park & Ride on another Carousel operated bus route – the Cressex Connect 8 – which runs every 30 minutes from Hugh Wycombe’s bus and rail stations on a more direct route than the 34 via the Cressex Business Park south of the town centre to the Coachway.

I suspect Cressex are also paying towards the service explaining why the Business Park has it’s branding on the buses.

I caught the 11:09 from the station with just one other passenger already on board and we headed off to the bus station where he got off and seven boarded. They’d all alighted along the route, with none actually getting off as we passed through the business park, leaving just myself on board to the Coachway. It takes just 13 minutes from the bus station to the Coachway.

Facilities at the Coachway are very impressive but looked hopelessly under utilised.

There are four bus/coach stops used by the aforementioned routes 8 and 34 as well as sister company Oxford Bus’s Aircoach routes to Oxford, Heathrow and Gatwick Airports.

It also seems to be a popular picking up point for coach tours.

During my half hour mooch around, there were more passengers boarding holiday tours ….

….. than scheduled bus and coach services. All of which left having picked up and set down no-one.

The Park & Ride car park looked distinctly under used and I wondered if I”d just caught it on a quiet day or whether it’s always so devoid of activity.

It can’t be the parking charges putting people off, as it was on “free vend” and looked like it had been for some time with all three pay machines carrying notices saying no payment is necessary.

The Coachway has everything you’d want including real time departure screens ….

…. two enclosed waiting area, one with hard looking (and they are) perch type seats and a bench to put your lap top on ….

…. and one with hard looking (and they are) low down seats.

There are more hard looking (and they are) low down seats outside on the ‘concourse’ too.

…. and a long closed office and travel shop style window.

In fact there were almost as many closed shuttered windows as there were bus and coach stops.

Having enjoyed an explore around I caught the 12:05 route 34 back into town before it succumbed to its DRT makeover from today.

Carousel are raising the DRT awareness in advance by using the redundant Oxford Bus PickMeUp branded minibuses on the route, which from today will of course be the order of the new regime.

Although it was odd to see a supply of timetables for route 34 on board rather than any information about PickMeUp.

However, when we arrived back at the bus station a supervisor jumped on board with a poster to affix inside advising of the new arrangements, so that was good to see.

On the journey back into town we picked up a mum and her child from one of the bus stops also served by what used to be Carousel’s route 37 and now Arriva’s route 36 as I experienced on my last visit.

They seemed quite happy to have discovered an alternative bus route even though it did have only one more weekday day to run.

We did the dog leg into the developing Abbey Barn Park nestling alongside the M40 and saw lots of houses and flats, with cars in drives and no people about. No passengers either from the temporary bus stop where the bus does a turnaround.

Still, I’m sure they’ll all flock on to the bus once they realise the delights that DRT offers from today.

After that it was back into town via Wycombe Marsh and the railway station but no one came on board.

One thing they’ll need to be careful of is alighting and boarding from the bus station. It wasn’t designed for Mercedes Sprinter minibuses.

More on Thursday when I’ve had a pick me up from PickMeUp as well as another new DRT that’s started recently in Nottinghamshire.

20 thoughts on “Pick me up at the Coachway”