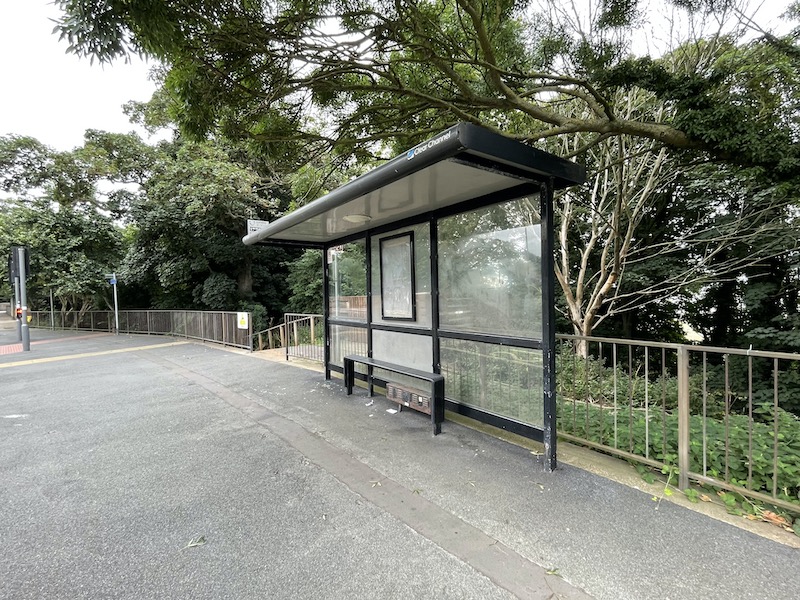 It’s on Unst, the furthest north island in the Shetland archipelago, in the small hamlet of Valsgarth.

It was a great trip.

I turned my attention southwards in 2019 and visited Lizard Point in August that year to check out Britain’s most southerly bus stop.

It was another great trip.

Following 2020’s write off for long adventures due to Covid restrictions I thought it was time I completed these compass point travels and explore Britain’s most easterly and westerly located bus stops before this summer is over.

A couple of weeks ago saw my brother and I heading towards Lowestoft on a round rail trip heading out to Cambridge with Thameslink from our homes on the Brighton line then across to Norwich and the Wherry Line to Lowestoft with Greater Anglia, returning via the East Suffolk Line to Ipswich and the Great Eastern Line to London. It made for an interesting circular rail excursion with the bonus being to check out Britain’s easternmost bus stop while in Lowestoft.

Before leaving home I’d been doing some desk top bus stop research to establish exactly where this mission should take us in the Suffolk coastal town and it didn’t take long to narrow down the options to the nearest bus stops to Ness Point – famous for being Britain’s most easterly point.

My research was showing two very likely bus stop contenders for Britain’s Eastern Most Bus Stop accolade. Despite careful on screen sizing up there didn’t seem to be any latitude of longitude between them (if you see what I mean). No matter how much I magnified the on screen map it looked like they were on the same line of longitude.

Not least because one of the contenders appears in the ‘street view ‘ images but while it recently also appeared on Google Maps as a bus stop, it suddenly disappeared a fortnight ago leading to a belief it’s no longer in use.

The second contender is the southbound bus stop in St Margarets Road. It’s two stops further north in what appears to be a location on exactly the same longitude as Old Nelson Street if you cast your eye up a map. The bus stop in between these two shortlisted possibilities at Manor Court doesn’t count as the road veers westwards then back easterly again to almost the same trajectory as before the bend.

Right clicking on both locations on a Google map brings up the coordinates of both locations and this showed less than 0.0005 of a degree longitude between them which could be down to inaccurate plotting on the map, not least because the location of the Old Nelson Street stop doesn’t appear on the map and had to be guessed.

The only way to resolve this dilemma was to pay a visit to both stops, take co-ordinate measurements on site and check out the status of Old Nelson Street.

I wondered whether we should take one of those tripods you see surveyors use as they peer into a camera-like contraption on top. Neither did we wear high-viz jackets or hard hats, but we did take this mission incredibly seriously as I knew keen readers who might already be familiar with Britain’s most easterly bus stop would soon point out if we got it wrong.

All our train connections worked a treat from Sussex via Cambridge and Norwich to Lowestoft and we found ourselves outside the town’s police station inspecting the first contender at Old Nelson Street.

Except it certainly didn’t look like a bus stop in use with two empty cases in the shelter and no timetable posted on the lamppost with the stop flag. We waited a while and no buses came past. I asked someone waiting outside the entrance to the police station if he knew if buses stopped there, but he seemed to have other things on his mind.

We took coordinates and found we our longitude position was 1 degree, 45 minutes, 20.169 seconds east of the Greenwich Meridian. Or 1.755603 degrees as a decimal.

We then took a stroll northwards to St Margarets Road to take a look there.

This bus stop was also devoid of timetable information and looked even more uncared for with its spray painted white graffiti and fly posted notices on the shelter. Perhaps this had also been abandoned as a bus stop too?

But just as we were lamenting its poor visual state and thinking it’ll be weeks or even months before anyone does anything about it, along came a Clear Channel branded van …

… and then gets to work on removing the graffiti.

The whole job was efficiently completed in less than five minutes almost as if the bus shelter was being made ready for a commemorative photograph to appear in a blog about being Britain’s most easterly located bus stop.

All that was needed was to check the coordinates and see if indeed this is the eastern most bus stop.

The anticipation grew as we checked the reading which showed ….. Longitude 1 degree, 45 minutes, 22.185 seconds east of the Greenwich Meridian. Or 1.756163 degrees as a decimal.

That makes it 0.00056 of a degree of longitude further east than Old Nelson Street which at a latitude of 52 degrees north (of the equator) works out just a few yards further east.

Even if Old Nelson Street was still in use, regretfully it loses out for the prize of being Britain’s most easterly bus stop to St Margaret’s Road. And that’s official.

We celebrated our completed mission by waiting for a bus to come by …. which one finally did on route 1 on the ‘coastal clipper’ branded route from Martham, Hemsby and Great Yarmouth to Lowestoft but in ‘coastal reds’ livery (which should be for route 101) ….

… followed shortly by a ‘coastal links’ branded X1 from Norwich.

And then, mission completed, we headed home reflecting how useful it would be if that bus stop as well as perhaps having a commemorative plaque could more usefully show a timetable and some route numbers. And perhaps the bus stop flag at Old Nelson Street should be removed, assuming it is now abandoned.

This just leaves Britain’s most westerly bus stop to visit. And we’re heading off on a day trip to visit it tomorrow. Any guesses?

I’ll tell you all about it later this week.