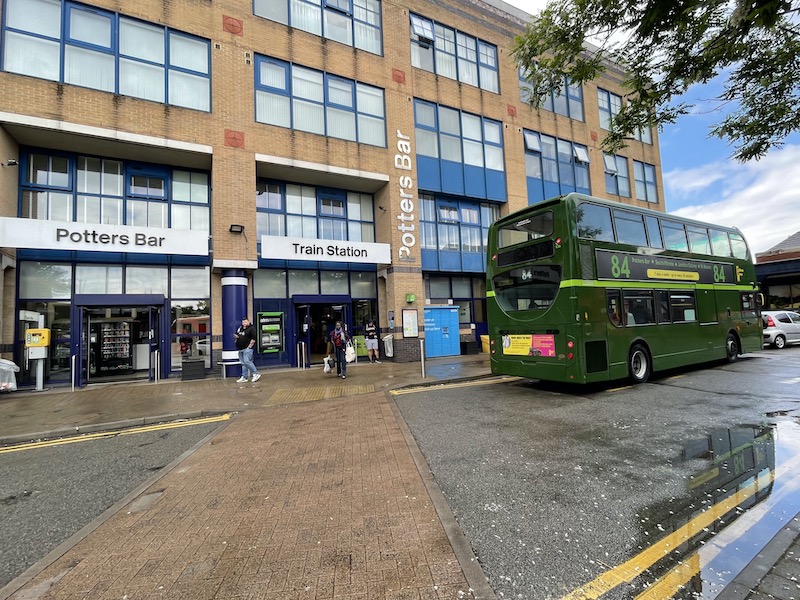 Continuing my AtoZ travels, I thought Potters Bar would make for an interesting mid-size town to look at with it being on the fringes of, but not part of, London. Although with a population of surprisingly only around 22,500 it’s more in the small-town size category, rather like O is for Oswestry.

Historically Potters Bar was in Middlesex, of course, transferring to Hertfordshire in 1965’s big boundary bust up which created an expanded Greater London and eliminated Middlesex as a county other than for postal addresses.

Although never part of the Capital, London’s influence on Potters Bar has a long history, the town being part of the Metropolitan Police area until as recently as 2000 when it transferred more logically to Hertfordshire Constabulary and, of course, when it comes to transport a London Transport central bus garage has been located in the town since 1930 despite in days gone by it being served by only three routes (29, 134 and 242) although no end of country bus and Green Line coach routes headed south to New Barnet as well as one to Enfield, and the town has long enjoyed an intensive commuter rail service to Kings Cross and Moorgate at the southern end of the East Coast Main Line.

Nearest largest towns include St Albans and Hatfield/Welwyn Garden City to the north with Cheshunt/Waltham Cross to the east and Enfield, Barnet and Borehamwood to the south.

In recent years bus connections to most of these towns have declined considerably, notably the virtual demise of route 242 to Cuffley, Cheshunt and Waltham Cross (other than at school times and positioning journeys) and earlier this year the complete withdrawal of a link to Barnet with the curtailment of route 84. On the other hand a regular link to Borehamwood via South Mimms has been a regular feature for many years whereas decades ago there was just a morning and afternoon peak hour journey beyond South Mimms serving Borehamwood.

It’s instructive to compare today’s bus network serving the town with that which applied in the 1960s.

As already mentioned the bus scene was dominated by three red bus central area routes (route 29 ran between South Mimms and Victoria albeit mostly localised journeys on a 29B variant only running as far south as Turnpike Lane; route 134 from Potters Bar station ran to Pimlico and the aforementioned route 242 from South Mimms to Chingford) as well as a myriad of country bus routes.

A half hourly frequency on routes 303/303A passed through Potters Bar on the long route linking New Barnet with Hatfield, Welwyn Garden City, Stevenage and Hitchin. Route 313 ran half hourly between Enfield and Potters Bar Cranborne Road with most journeys continuing via South Mimms to St Albans and routes 340/340B running every 90 minutes from New Barnet to Welwyn Garden City while routes 350/350A ran hourly to 90 minutely from New Barnet to Bishops Stortford via Hertford.

In addition to all those green buses there were three buses an hour on Green Line routes 716/716A/717 linking Potters Bar north to Hitchin and south to central London continuing hourly to each of Chertsey and Woking.

Aside from route 313 all the aforementioned country bus and Green Line routes, together with route 134, ran between Potters Bar and New Barnet along the A1000 Barnet Road whereas from April this year there’s been nothing,

As already mentioned route 242, run commercially by Metroline from its bus garage in the town to Cuffley, Cheshunt and Waltham Cross, is now but a shadow of its past glory with just four journeys a day.

Northwards from Potters Bar towards Brookmans Park and Hatfield where once those country buses and Green Line routes ran a frequent service, UNO now runs hourly route 610 branded as Dragonfly which continues beyond Hatfield to Harpenden and Luton having commenced its journey in Cockfosters. Despite those frequent links to Welwyn Garden City, Stevenage and Hitchin of old, there’s now no direct journeys between Potters Bar and those towns.

Although Potters Bar enjoyed all those inter-urban country bus and Green Line routes in the 1960s it wasn’t until 1968 it had a town bus route when the one bus operation route 284 began, famously at one time using FRM1. In 1977 the route was revised and renumbered to PB1 which continues in current times, being operated by Metroline to a frying pan shape of route providing a link from the Dugdale Hill area to the station and the busy shopping area of Darkes Lane continuing on to High Street and the bus garage before doing a one way circuit around Oakmere Lane, Chase Avenue, Oakmere Avenue and back via Southgate Road to High Street.

Sullivan Buses also introduced an anti-clockwise circuit of the town on its revamped route 84 from April with journeys from St Albans double running to serve the station then continuing via Mutton Lane, High Street, Hatfield Road and Church Road to Darkes Lane and back to the the station.

Unfortunately the update to Hertfordshire County Council’s excellent map of both the Potters Bar area as well as it’s countywide map incorrectly shows the route missing out Mutton Lane and terminating at the bus garage…..

…… which it doesn’t, as shown on Sullivan Buses’ map.

I visited Potters Bar during last week’s heatwave and had an enjoyable ride around the town including sampling route PB1 and parts of routes 84, 298, 313 and 611.

Passenger numbers on all journeys were in the low single figures. The early afternoon journey I took on route PB1 took one passenger out to Dugdale Hill and brought three back in, two of whom got off at the station and one went through to Potters Bar bus garage. Three boarded at the station with two alighting at the bus garage and one on the loop in Chase Avenue. One boarded at the bus garage getting off on the loop with one boarding there and one more at the crossroads by the former infamous The Lion timing point with one more in the High Street and all three on board alighting at the station. Similar numbers travelled on route 84 as it did its circuit of the town.

Potters Bar owes its early development to the arrival of the railway in 1850 and ever since commuting to London has been an important part of the town’s economy. Trains are provided by both Great Northern (half hourly Welwyn Garden City to Moorgate) and Thameslink (half hourly Cambridge to Kings Cross) although you’d be hard pressed to explain why journeys are branded the latter rather than the former as they don’t touch the ‘Thameslink core’. Both come under the GTR franchise.

Great Northern journeys stop at all stations while Thameslink run non stop between Potters Bar and Finsbury Park southbound and straight to Hatfield then all stations to Cambridge northbound.

Train spotters are kept busy by frequent sitings every few minutes of LNER trains zooming through the station ….

It all makes for a very busy train town, but sadly not for passengers.

As already mentioned Hertfordshire produce a decent bus map (aside from its already noted inaccuracy) as well as online timetables using the Intalink branding.

At Potters Bar station, there are four bus stops three of which have shelters one of which has a real time sign showing departures from all four stops….

…. and the other two stops don’t have either.

The Intalink website is certainly very clear and easy to use and an exemplar for others to follow. UNO, Sullivan Buses and Metroline also have decent information including timetables and maps on their websites. Suffice to say TfL are the exception in that they have nothing other than a list of bus stops.

Back in history London Transport served the small industrial estate at the dead end of Cranborne Road by the railway line with journeys on route 29B, renumbered 298 in 1968, and these continued right through until November 2017 when the route was cut back to turn at the station. Initially a limited facility was provided by certain journeys on route 242 being extended there as still shown on the countywide bus map (above); but these were short lived and were soon withdrawn.

It’s ironic Metroline’s large bus garage in the town survived the post London Bus privatisation cull which saw garages in Finchley and Muswell Hill close their doors both of which are much closer to routes now being operated from Potters Bar. The upshot is 124 buses on routes 134, 231, 234, 263, 307, 317, 382, 384, 491, 634 and W8 run up and down Barnet Road, Southgate Road and The Ridgeway out of service at the start and end of the day as well as for meal breaks for drivers throughout the day – all making for a very busy bus town, but sadly not for passengers.

40 thoughts on “P is for Potters Bar”