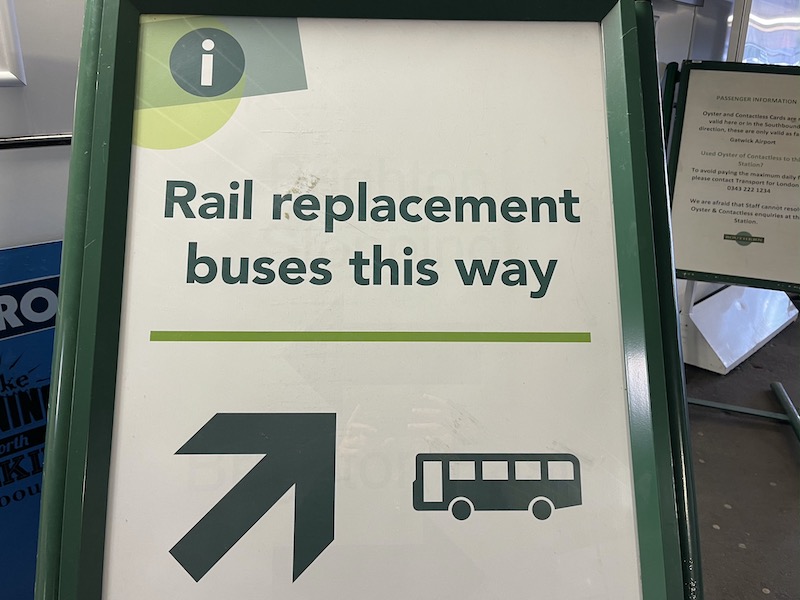 It’s a bit déjà vu on the Brighton Main Line this week. Flushed with a successful nine day blockade south of Three Bridges to Brighton and Lewes during half term in February 2019 which at the time was billed as a one-off efficient way of completing a whole host of upgrade work to tracks and infrastructure saving disruption across countless weekend closures, we’re back for more of the same with another nine day blockade which kicked off yesterday.

This time Network Rail’s agenda includes replacing the points just north of Haywards Heath after the four tracks leave the station and at Copyhold Junction revert back to double track towards Balcombe and Three Bridges. Other tracks at Burgess Hill, Preston Park and in Clayton Tunnel will be replaced as well as a new pedestrian tunnel constructed under the railway to divert a public footpath to pass under the tracks just north of Hassocks replacing a dangerous foot crossing that previously crossed the main line itself at surface level.

This footpath crossing has been closed for some months as a short term measure pending the new tunnel being constructed after a series of tragic suicides at this notorious location over the last few years.

It’s a footpath I’ve used myself while out walking around the local area where I live and I must say it has always struck me as highly dangerous with trains racing by even if you’re fully alert.

Other works brought into the project include rebuilding a collapsed culvert in Balcombe tunnel and installing fibre optic cable along the line from Three Bridges to Brighton as part of a scheme for the whole route from Victoria. There’s also embankment and cutting stabilisation at various locations as well as enhanced maintenance inspections, tree planting and the refurbishment of Spatham Lane level crossing near Cooksbridge.

While all that work’s going on out of sight of passengers and the tracks have fallen silent there’s also plenty of action on station forecourts and on the roads ferrying what it’s hoped will be reduced numbers travelling on a huge fleet of coaches, single deck and double deck buses brought in from London and the south east including from as far away as Bournemouth.

There’s even a break down wagon on hand in case of any issues with mechanical problems on the road.

Long term readers may recall I waxed lyrically about the gold plated rail replacement facilities during the February 2019 blockade in two blogs. If you’re really keen you can read them again in Part 1 and Part 2 of Britain’s biggest rail replacement ever.

This time round a lot of that gold plating has been removed making for more of a bronze plated operation. Three years ago, money seemed no object to ensure there were no hiccups and many of the extra buses and coaches laid on were never used.

Last time buses were scheduled to run on seven different routes including non-stop journeys as you can see from the layout of the Three Bridges Bus Hub below….

This time only three routes are operating over the weekends – Brighton Direct, Brighton Stoppers and Lewes. Tomorrow and on weekdays there’ll be some Haywards Heath direct to Three Bridges journeys as well as peak hour extras from other stations, including Hassocks, running direct.

Queueing systems put in place at both Brighton and Three Bridges letting you know how long you could expect to queue (theme park style) were never needed in 2019, mainly because the pre blockade publicity encouraging passengers to avoid travel had been so successful most commuters took the week off, and this was well before ‘working from home’ became a thing in the pandemic.

This time there are no “estimated queue time from this point” notices. Also noticeably absent this time round are goodie bags, freebies and an over supply of large foam hand waving ‘customer assistants’.

I had a good ride round to see how things were going during yesterday’s inaugural day.

Whereas in 2019 the nine day blockade passed without Brighton & Hove Albion playing a home match, this time, they’re playing at home with a 15:00 kick-off on both Saturdays, yesterday 19th and next week, 26th, so no wonder there were tens of spare buses and coaches hanging around at both Brighton and Three Bridges waiting for their calling.

Here are just a few images taken yesterday morning before the buses were called into action.

The “Bus Hub” marquee at Three Bridges is back and is the same as last time, including the long walkway to reach it ….

….. but this time the footbridge constructed to take passengers from the exit by the station gateline to the marquee hasn’t reappeared.

This means everyone has to cross the path of buses leaving the hub rather than pass overhead and not impede their progress.

As you can see the crossing is well marshalled with high-viz wearing, baton waving staff, but it does cause a delay for buses leaving especially if a train has just come in disgorging hundreds of passengers.

It also means there are stairs to negotiate both up from the station exit and then back down again to the crossing point.

Those with luggage and buggies were struggling somewhat. There is an alternative level access by leaving the station by the front entrance/exit and walking along the road to the former car park now bus hub. I saw at least one person using a wheelchair taking that route – as they had to.

I also noticed passengers spotting a bus with, for example, a ‘Brighton Direct’ paper destination in the windscreen, deviating from the official trajectory into the covered walkway to see if they would be let on board while the bus is waiting to cross the crossing. I didn’t see any drivers opening doors to let them on and high-viz people soon told them to head into the covered walkway to the marquee departure point.

… and there are high-viz wearing helpers around to guide you to the correct departure point.

There didn’t seem to be any queuing systems for the gates, but as you can see there weren’t many passengers at 09:30 yesterday morning, although that would change later on as the Albion game approached with fans mixing with day trippers to Brighton and shoppers. Things got quite busy with some coaches overloading.

There’s a coffee stall back again ….

….. but I didn’t see any complimentary vouchers for a coffee which were quite common last time – another cut back I guess.

Temporary toilets are once again available, which is good.

But there aren’t many seats – only four bench seats, and one of those was being used by the coffee stall to store ‘stuff’.

Mind you, departures are fairly frequent and buses were pulling up to the departure gate in good time, so there shouldn’t be a need for much queueing.

An arrivals platform has been built which makes alighting from buses and coaches slightly easier.

But from that point to the station platforms is a bit of a route march as they’ve segregated departing and arriving passengers, making passengers changing from bus to train take the longer route.

Meanwhile down in Brighton, the crash barrier zigzag queuing arrangement is back.

Brighton is well used to dealing with weekend closures and segregating passengers to board buses running direct to Three Bridges from those wanting a stopping bus for intermediate stations.

Only two vehicles can load at any one time, but it’s a quick and slick operation and for this extended blockade rather than the normal weekend closures it’s noticeable how many more high-viz wearing ‘helping’ staff there are around.

One advantage of a nine-day blockade is the extra investment that goes into making sure the infrastructure and signage is good, as I hope I’ve conveyed. Although not quite as gold plated as last time, it’s still much better than the average weekend closure for engineering works where passengers are usually left befuddled and ill informed as I’ve covered in a previous blog.

My local station, Hassocks, has ensured there’s plenty of space available for buses and coaches by eliminating most of the car parking spaces on the London bound side of the station by the ticket office. This never happens for a weekend closure.

I’ll report on the timetables in place for the replacement buses and my journey experiences as well as how tomorrow morning’s peak hour commuting goes in Tuesday’s blog,

If 2019 is anything to go by, it’ll be a very quiet morning with most commuters opting to work from home or take a week off to coincide with half term (which it is in West Sussex but not in Surrey, East Sussex and Brighton & Hove where it took place last week). But it looks as though there’ll be plenty of buses if needed.