Regular readers will remember last summer I took a ride on four of Kent County Council’s new ‘Rural Transport Initiatives’. Three of these involved the introduction of ‘Taxi Buses’ including a Sevenoaks Taxi Bus linking West Kingsdown and the East Hill Residential Park with Sevenoaks; a Sandwich Taxi Bus linking that delightful town with the villages of Staple, Northbourne and Mongeham; and a ‘Hopper Service’ in Tenterden comprising a small network of four infrequent routes linking the town with surrounding villages. If you missed reading my experiences travelling on these routes here’s a link.

The fourth ’Rural Transport Initiative’ got underway in July 2019 when Nu-Venture’s tendered route 58 from Trottiscliffe, West Malling and East Malling to Maidstone was cut back to the western outskirts of Maidstone at Aylesford Retail Park where connections were provided with Arriva’s regular trunk routes (71/71A and 72) to and from the town centre. I took a ride on route 58 both before and after to savour the difference. The idea was to run the 58 more frequently on a truncated route with connections. I wasn’t sure whether that’s a better offering for the passenger or not.

From those initiatives launched in Summer 2019, fast forward to 17th February 2020, when the fifth of Kent’s five ‘Rural Transport Initiatives’ finally began. 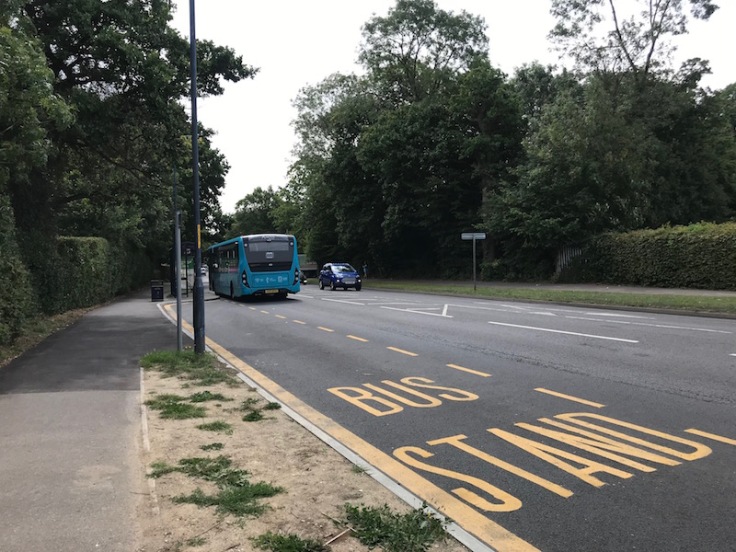 It had been delayed to allow time for a purpose built lay-by to be constructed opposite a large Morrisons in Sutton Road on the east side of Maidstone to provide space for buses on the two routes being cut back and wait to provide connections from Arriva’s frequent routes for passengers returning from the town centre. 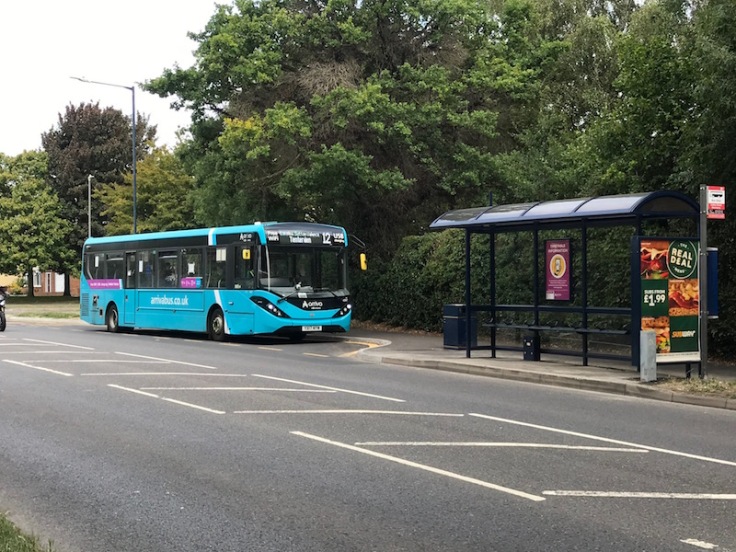 Now Covid is easing, and we’re being encouraged to ‘Travel Out, to Help Out’ I thought it was time to take a look at how this fifth ‘Initiative’ is settling down after its first five months, so took a trip over to Maidstone today to have a look.

Two tendered rural routes to the east of Maidstone have been cut back to turn round at the Sutton Road Morrisons which is about two-and-a-half miles east of the town centre. Nu-Venture’s 13 runs to Otham or Langley, Langley Heath, Leeds Castle and Hollingbourne every hour (with a morning and afternoon journey at school times still continuing into Maidstone) …. 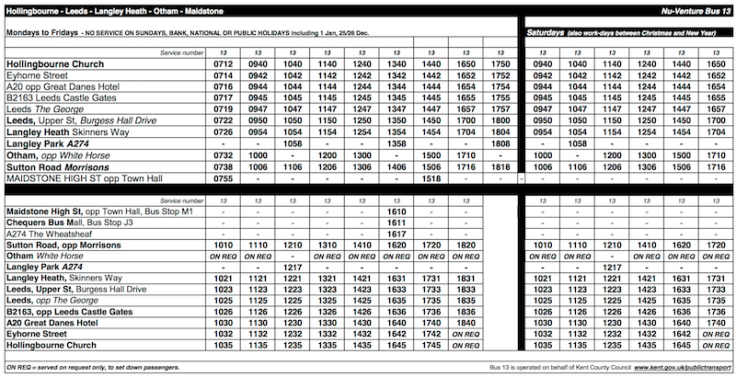 …. and Arriva’s 59 operates five/six journeys a day to Chart Sutton, Kingswood and Grafty Green (also with the first journey continuing into Maidstone). 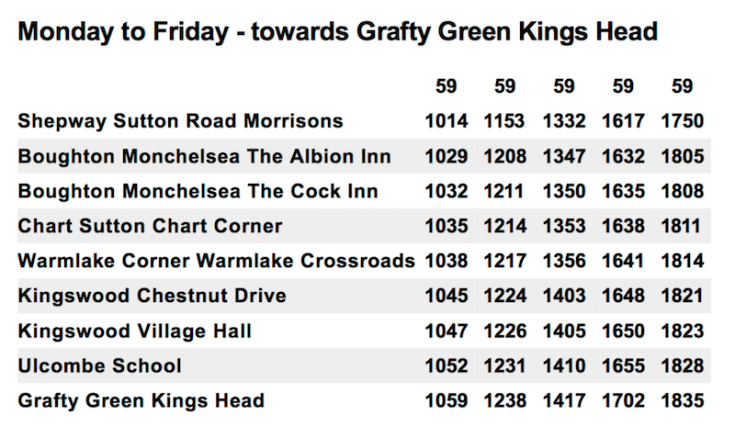 The daytime connection at Morrisons is to and from either Arriva’s ten minute frequency local route 82 to the nearby Park Wood area or the half hourly route 12 which continues on to Tenterden.

As with my experience using the truncated route 58 last summer, the three problems inherent with this ‘initiative’ are (a) from Maidstone out to the villages being able to buy a through ticket on the Arriva ‘trunk’ route (I couldn’t last summer when I travelled), (b) knowing how much time you need to allow to make the journey from the town centre to be sure of making the connection with the less frequent route to the villages, and (c) in the inbound direction being confident the driver of the connecting ‘trunk’ bus will accept the through ticket, especially when issued by a ‘foreign’ company such as Nu-Venture (the Arriva driver needed some persuading when I travelled from a 58 on to a 71 last year).

Time has moved on since I travelled last summer and I’m now the proud owner of a concessionary pass so have no need of fretting about the availability, or not, of through tickets, but I was intrigued to see if the problem had been resolved so as I boarded Arriva’s route 82 in Maidstone’s dismal Chequers Bus Station and asked (“on behalf of a friend”) the two drivers doing a handover if I could buy a through ticket on to Nu-Venture’s route 13 to Hollingbourne.

They both reaffirmed this wasn’t possible. The only ticket suitable for such a journey would be a Discovery day ticket they explained. So, nothing has changed twelve months on. This information from drivers conflicts with the official line from Kent County Council which clearly states through tickets are available including journeys that “commence in Maidstone Town Centre for travel to villages”.

It seems clear to me, they’re not; and it’s a fundamental flaw in these ‘initiatives’ – which seem to assume everyone starts their journey from the outer end. Even then I detected there’s still confusion among Arriva drivers whether to accept Nu-Venture tickets on inbound journeys at Morrisons towards the town centre.

I headed out to Morrisons intending to catch the 12:10 route 13 but was so cautious in my timings I arrived in plenty of time for Arriva’s route 59 to Grafty Green at 11:53 so decided to take this first.

The bus arrived on its inbound journey on time at 11:47 and it immediately became evident that the journey doesn’t actually reach the bus stop right outside Morrisons (on the far left in the above photograph).

In the Maidstone bound direction the bus turns right into Nottingham Avenue to use a conveniently sited roundabout about 100 yards along that road to turn around. 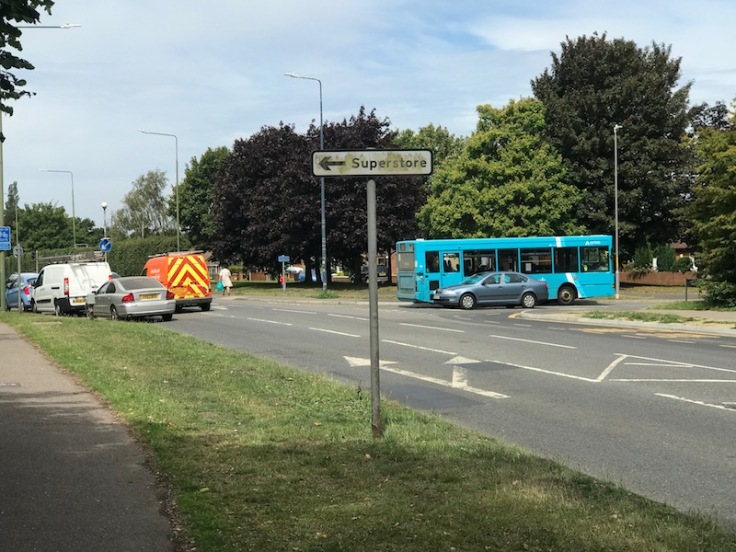 The trouble is, by making this manoeuvre it misses the handy stop right outside Morrisons!

The previous stop is some distance to the east which is fine if you’re connecting on to a 12 or 82 to continue into Maidstone, but not so good if you want to shop at Morrisons – see photo below taken from this previous stop looking towards the new lay-by opposite Morrisons.

As the bus was making the turn, I noticed an Arriva double deck had arrived and parked up in Nottingham Avenue to facilitate a driver changeover. After parking the bus into the bespoke lay-by, the driver being relieved wandered back to the double decker and then drove back to Arriva’s depot near the town centre.

This can’t be a very efficient way to schedule this operation – especially as I noticed the drivers changed over again when we arrived back from the return journey.

But before that, we headed off towards Grafty Green, leaving on time, with just me on board.

It’s a 45 minute journey and we were making good progress until after about thirty minutes we reached the village of Kingswood where the driver stopped opposite the Village Hall and announced that’s as far as he’s going. I asked if this was Grafty Green, and he explained we can’t reach there as the road ahead is closed and there’s no alternative route.

I never cease to be amazed how what surprises are thrown up on my travels. Having researched this particular trip and studied Arriva’s timetables and information online as instructed and reinforced at bus stops, to the exclusion of current bus times …

… I hadn’t seen anything to alert passengers to the fact a third of the route had been abandoned. I hope residents of Grafty Green have picked up on the interuption to service.

As indeed residents of Boughton Monchelsea too, as the driver pointed out we’d missed that part of the route out as well due to roadworks closing another road.

When I returned home this afternoon, I studied Arriva’s website once again to check I hadn’t missed anything. Clicking on ‘Latest’ (within the ‘Kent and Surrey’ pages) only brings up news dated ’23 Jan 20’ that “Some ticket prices are changing from 9th February 2020”. Clicking on ‘Service Updates’ offers a facility to ‘Filter by location’ or ‘Filter by Service Number’ with a drop down menu headed ‘Please select’ – except there’s no drop down menu to ‘select’ and the ‘No results found’ isn’t particularly inspiring. Entering ’59’ in the ‘Find services and timetables’ box, brings up the full timetable, including Boughton Monchelsea and Grafty Green.

I did one more check by using the Journey Planner on Arriva’s website to check out a journey from Kingswood to Grafty Green tomorrow at the time of my journey, and sure enough, no impediment was shown. Even a map confirmed the route the bus would take. 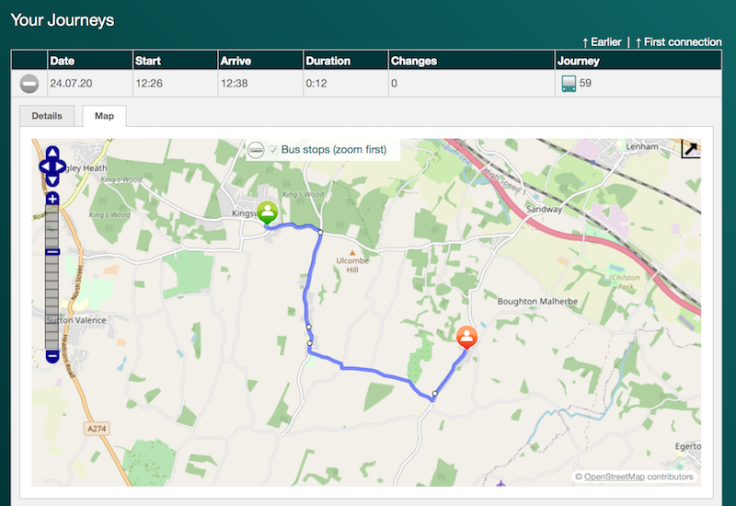 I also checked to see if the route between Maidstone and Kingswood would take me through Boughton Monchelsea – and the website map confirms it will. 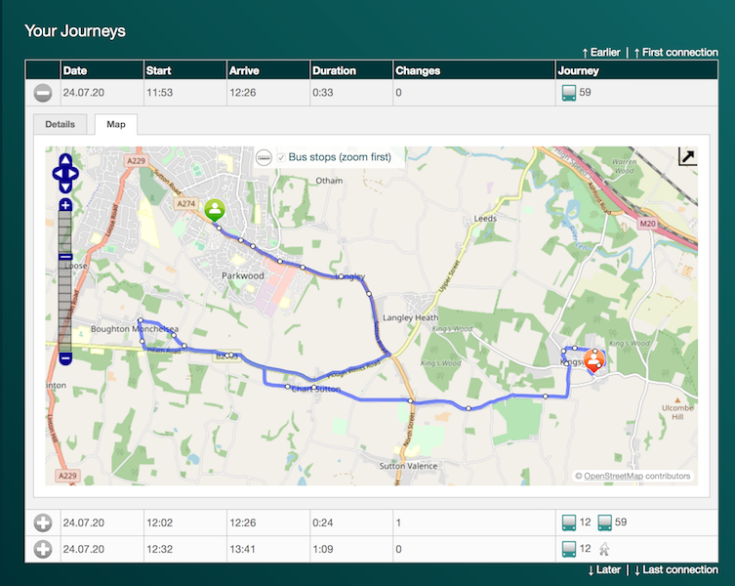 Oh well; I enjoyed an unplanned half an hour wander around Kingswood …. 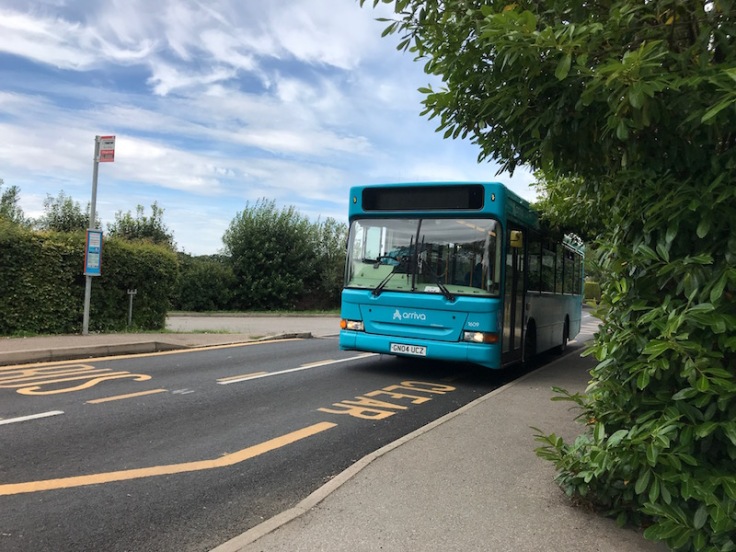 …. before hopping back on the bus and spent time reading all the notices Arriva deem necessary to post all over the bus… 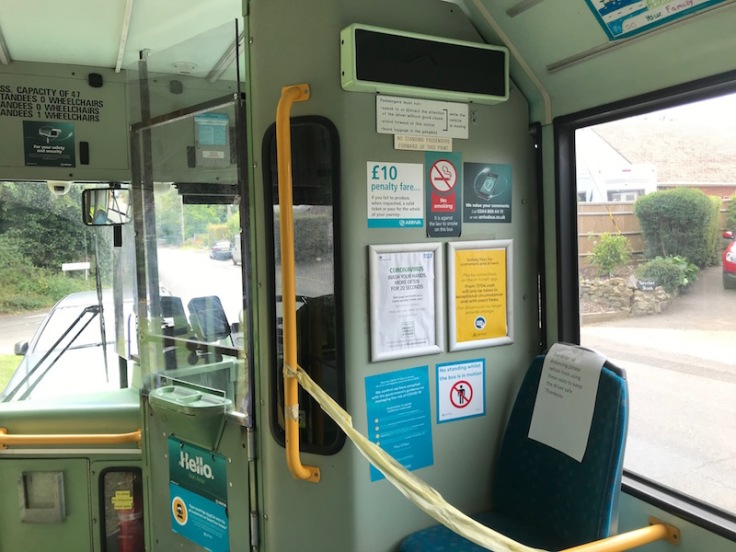 … and then the driver and I headed back to Morrisons, well the stop before Morrisons for me, and by the time I walked to the eastbound connecting stop I found the lay-by positively over brimming with buses – including a connecting bus on the 12, a relief bus from Nu-Venture for the driver of the 13 to spend his lunch break on, and a relieving bus for the driver of the 59 having completed his one rounder on the route – including that half hour hanging around Kingswood! 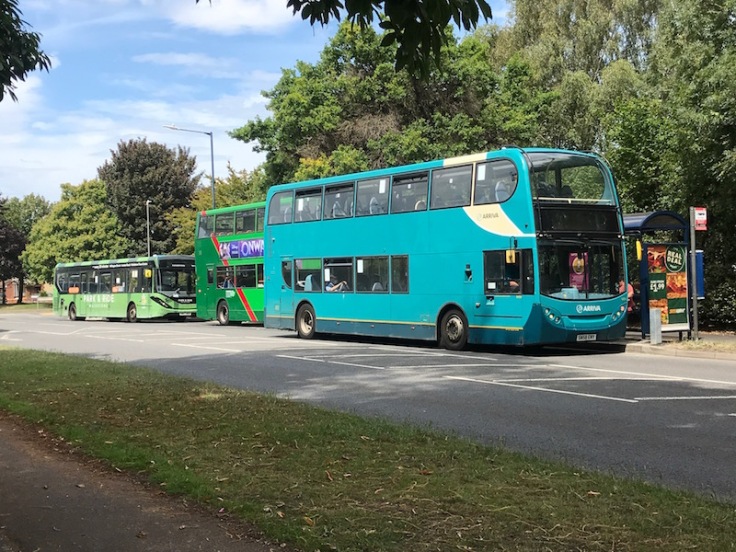 The bustling lay-by soon quietened down, and at about 14:00 just before the 13 was due back, the driver took the double decker down to the bus stop on the other side of the road to do the changeover there. 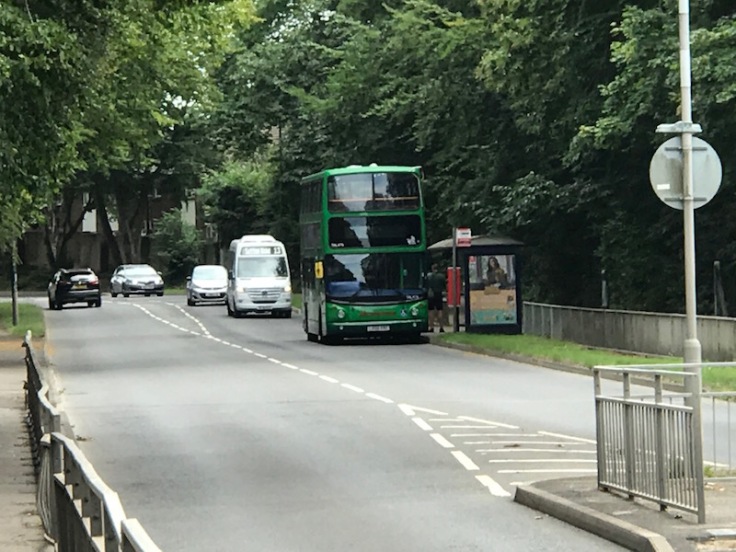 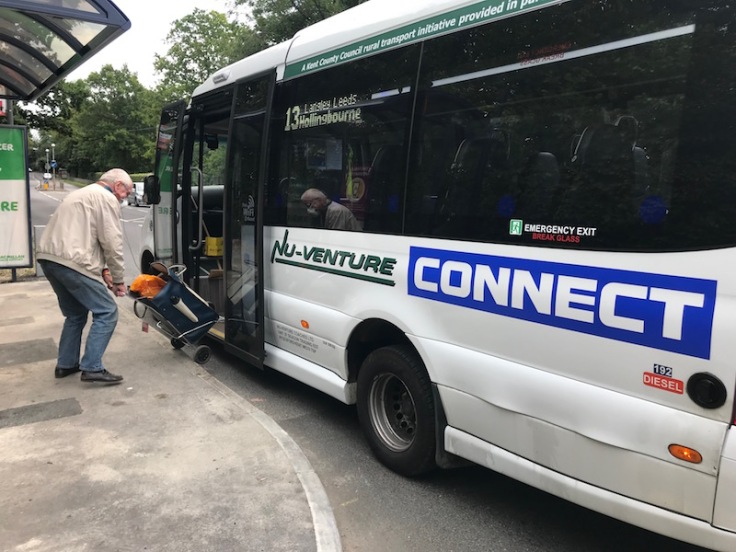 We headed off on the 25 minute run to Hollingbourne and it was a pleasure to meet up with Andrew my very pleasant driver.

We dropped the passenger returning home in Leeds (not the Yorkshire one) and when we crossed the A20 to reach the village of Hollingbourne we picked another passenger up who got off by the station on the edge of the village and we finally reached the rather delightful terminus in front of Hollingbourne Church for a five minute layover. 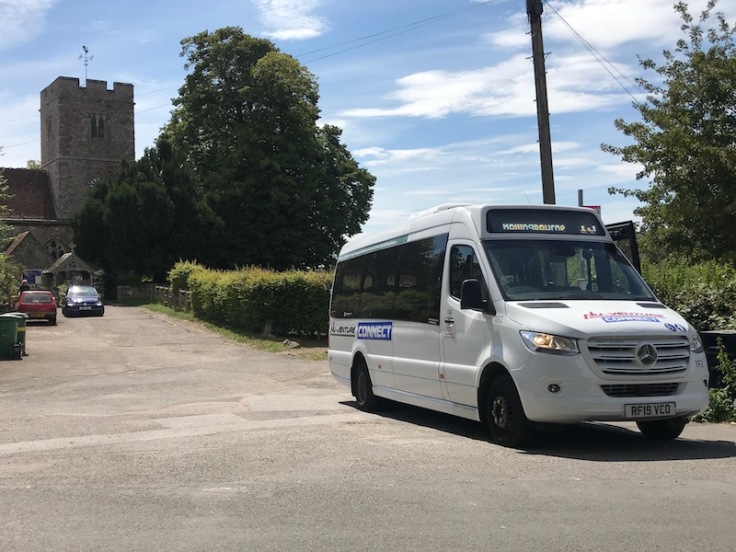 The return journey at 14:40 was one of the six (out of nine) journeys which operate along narrow roads through the village of Otham (rather than the other three journeys which run via Langley – not the Berkshire one) and it’s also the afternoon journey which continues into Maidstone town centre so it can return with school children at 16:10.  After Otham and back on the A274 heading into Maidstone we picked up a passenger (with an Arriva m-ticket) who came with us into the town centre.

Andrew reckons numbers travelling on the 13 are starting to pick up now severe lockdown restrictions have ended which is encouraging news, especially as my journey experiences were not so positive. I haven’t got the pre-February timetable, but it looks as though the time saved on journeys heading into Maidstone has been reinvested into a more frequent (hourly) timetable between Hollingbourne and Morrisons. The same principle applies to route 58 to Trottiscliffe too and is the main point of these initiatives. I’m not sure whether the same applies to route 59, but it’s certainly not so frequent as the truncated 13 and 58.

Whether this idea will be a success is still to be determined. The first four initiatives have now completed their year’s trial so presumably Kent County Council are reviewing whether they will continue, unless the Covid interuption means they’re being extended anyway.

Unfortunately residents of East Hill Residential Park served by the Sevenoaks Taxi Bus trial operated by Express Cars have been without a service since lockdown began, as the small interiors of the six seater means there’s no scope for social distancing. I understand Go-Coach Hire offered to reinstate a service but this was declined.

It will be interesting to see if it returns any time soon, but presumably residents of East Hill have now made other arrangements for their travel needs. Presumably if the road closure near Grafty Green goes on for much longer, the same will be for them too and route 59 will lose much of its purpose for existing.

These initiatives are certainly proving a mixed bag. 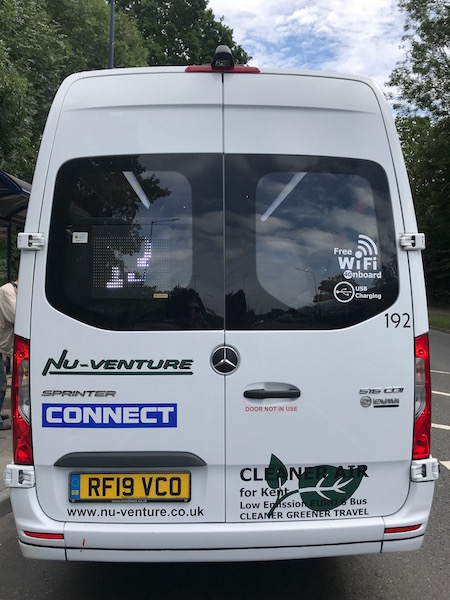