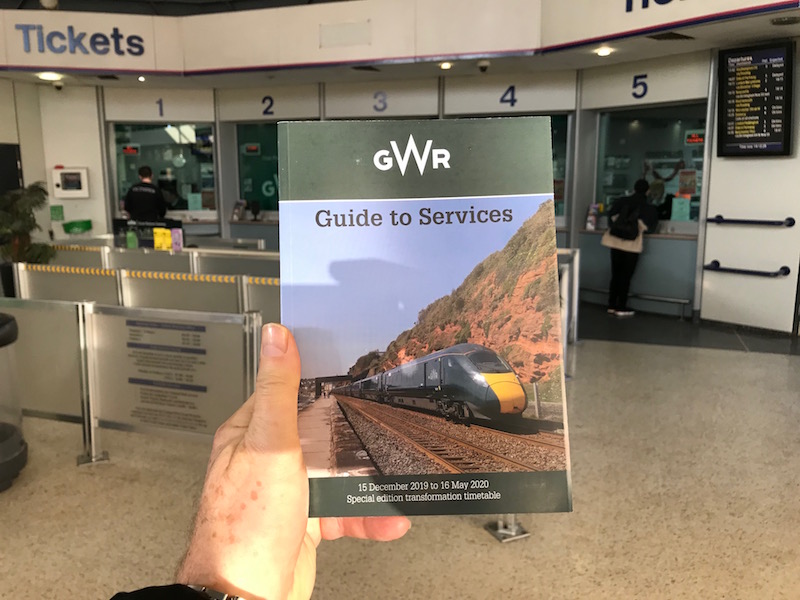 It may be a bit pricey – at £8 (and only for six months validity too); it may be hard to find – usually only available from ‘under the counter’ at certain GWR rail stations; it may have some annoying flaws in its layout and content (see below); but it’s a cracking read for timetable fans like me. Not least because this latest edition contains full details of the exciting new speeded up and enhanced frequency timetables being introduced across GWR’s network from Sunday.

It’s so refreshing to find a train company actually producing a fully comprehensive timetable book. And to its credit GWR also produce a whole range of timetable leaflets – 38 at the last count, if to a rather complex structure coded by a letter (B, D, K and T) and number (eg D2 is the Exeter – Barnstaple Line). I worked out a while ago that B is for Bristol based routes, D for Devon and T for Thames Valley and have just twigged that K is for Kernow – the name to always use if you want to show you’re proud of being Cornish.

GWR’s 408 page Guide to Services book is a true treasure trove of transport information. Everything you want to know about every station across the network is there including accessible information, hours of opening, other facilities (eg toilets) and even the station’s three letter CRS code. There are pages showing the detailed layout of every train type GWR operates including Class 158, 165/166 and 387s as well as the 5/10 and 9 coach new IET trains and the refurbished Night Riviera sleeper sets.

You’ll find details of Heritage railways and their nearest GWR station and major events happening during the validity of the timetable from the Boat Race to Six Nations Rugby and their implications for travel.

Best of all for a ‘bus and train user’ like me, are eight pages listing 111 towns and villages from Aberbeeg to Yeovil’s town centre not served directly by a GWR rail station yet within easy reach by a connecting bus route. The table shows where the nearest bus stop is located, the bus route number, the frequency and journey time and the bus operator along with its website. A great asset and huge credit to GWR for its inclusion.

There are also a few visitor attractions shown where a combined through ticket is available, eg Blenheim Palace and the West Somerset Railway and you’ll find listings showing contact details for a range of useful bodies including details of Community Rail Partnerships across the network.

The Guide to Services is set out encyclopaedic style rather than offering a sales and marketing pitch and details of the upcoming enhanced services in the new timetables are listed and explained  in a ‘matter of fact’ style rather than overly hyped up full of gloss as some other train companies might do.

Nevertheless there are details of GWR’s Pullman services and how to book the fine dining they offer and there’s also information about the extensive range of Day Ranger and Rover tickets GWR offer. Which bring’s me to one of my few criticisms of the Guide; it’s an unfortunate omission not to provide full details of these great value tickets including the useful addition of their areas and times of validity and prices.

My other criticism is the lack of an index to the 322 timetable pages within the Guide. There is a very helpful old style index (as used to be found in the National Rail Timetable) showing stations in alphabetical order, and for main stations, a sub index of destinations available from that station, but the reference isn’t to a page number where you can find the timetable but to the timetable leaflet code with its letter and number – eg D2.

There is a listing of all those timetable leaflets in letter/number order showing the destinations they cover – eg B1, B1b, B1c, B2 etc but these don’t refer to the page numbers where the timetables can be found either, so you’re a bit at sea leafing through the 322 pages full of detailed timetables trying to find the one you want. It would help if either either the index/listing referred to page numbers or the timetables showed the leaflet number so you knew where you are as you browsed.

UPDATE – it turns out I didn’t look right across that page as there are indeed page numbers listed alongside each timetable title over in the right hand side which I spotted when looking more closely – so apologies for the misinformation.

The detailed timetables are fully comprehensive and even include mileages and individual head codes for each individual journey. Standard symbols are used which are all listed once on a separate page with bespoke codes for a particular timetable at the end of each timetable section with advice of which page number to find them on shown at the bottom of each page.

At the back of the Guide is the most welcome inclusion of four pages of bus timetables, albeit heavily edited to remove intermediate points, showing bus times from Exeter to Exeter Airport and Okehampton and Bude, as well as Bodmin to Wadebridge and Padstow and Redruth to Helston.

The inside back cover includes a slightly truncated London Underground map and folds out to display a double page map of GWR’s network on the other side with the status of each station’s accessibility clearly shown.

All in all GWR’s Guide to Services is an excellent production and many congratulations and thanks to GWR for continuing to produce it. I remain puzzled why it’s kept a secret and hope it doesn’t go the same way as South West Trains’ similar excellent comprehensive book – ie discontinued.

Now, to get ready to enjoy some of those speeded up journeys available on GWR’s network; but more about these next week.

BusAndTrainUser – journeys around Britain by bus and train Book Review: GWR Guide to Services
%d bloggers like this: