GWR opted for a modest launch at Paddington and Bristol of their Hitachi Class 800 trains they call IET (Inter-city Express Train) two years ago; characteristically LNER went for the high profile with dry ice, Mallard, Flying Scotsman, bagpipes and more approach as they launched their Azuma branded version this spring and summer on the east coast mainline, but TransPennine Express (TPE) have once again gone for a very soft launch for their new Nova 1 branded bi-mode Class 802s. If you don’t follow specialist websites, you’d never know one was now out on the tracks.

In fact the first TPE Class 802 slipped out on 28th September for one return trip from Newcastle (06:03) to Liverpool and back (09:35). The second outing was today and luckily for me this coincided with a long planned visit to Leeds this weekend so I hopped on board and took an afternoon return journey up to Newcastle to try out this latest new train to hit the tracks.

Unsurprisingly the interior layout is similar to the GWR and LNER versions of the same class.

On the all important seat comfort issue, it may all be in the mind (and for all I know the seats may all be the same, albeit with different moquette) but I found these Nova 1 standard class seats very similar to LNER’s Azuma and better than GWR’s IET …

…. with the first class seats more disappointing being akin to GWR’s and not as good as LNER’s. 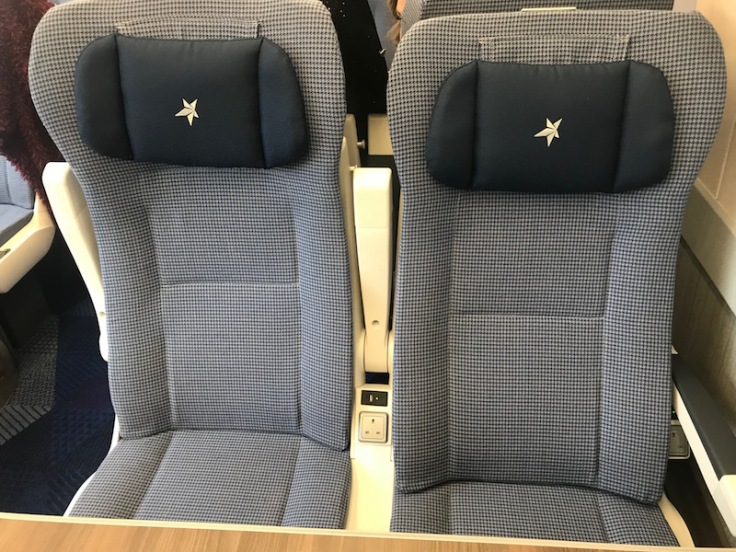 Neither class of seat felt as good as I found on the loco hauled CAF built Nova 3 coaches I reviewed on 23rd September but as in that case, never mind comfort, it’s a real luxury to have a five coach train bringing much needed extra capacity across the Pennines as these trains supplant the busy three coach diesel Class 185s.

Boarding a Saturday lunchtime departure (13:52) from Leeds towards York and Newcastle and finding oodles of empty seats to choose from really was a treat.

Like the Nova 3 coaches there are plenty of tables as well as airline seats. 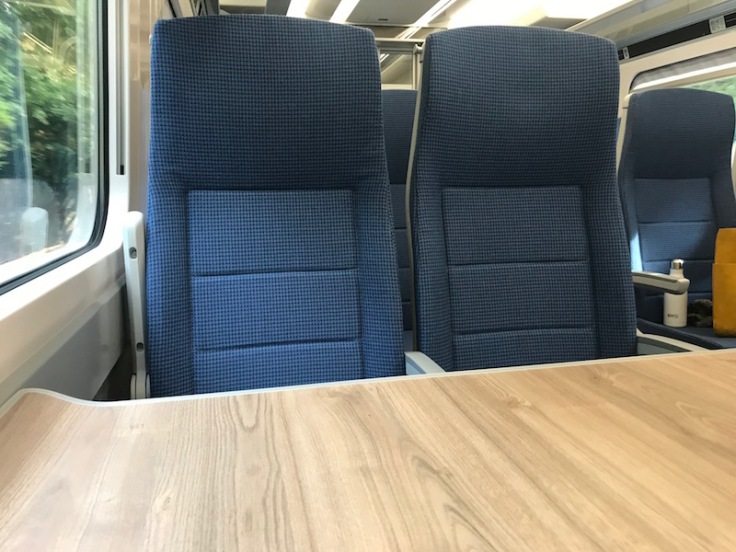 The middle three coaches (B, C and D) have eight ‘tables for four’ with coach A having four tables as it also has a universal accessible toilet although there’s no wheelchair space in coach A. 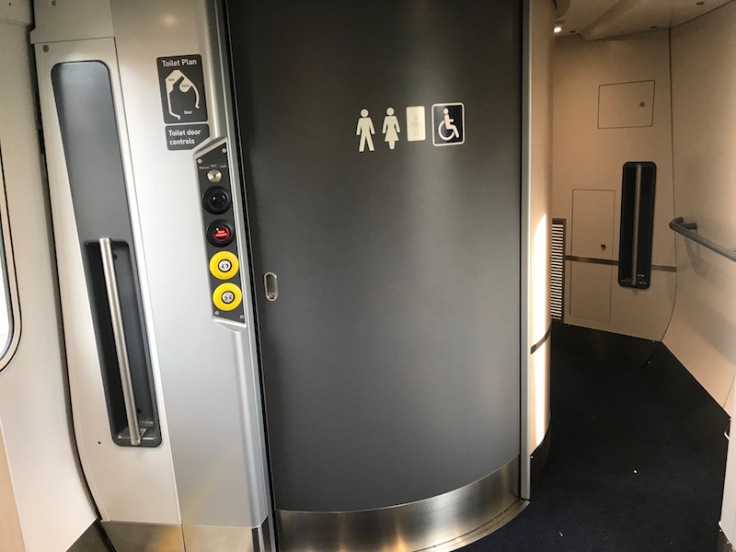 The two wheelchair spaces are in coach E where the first class seats can be found and where there’s also another universal accessible toilet. 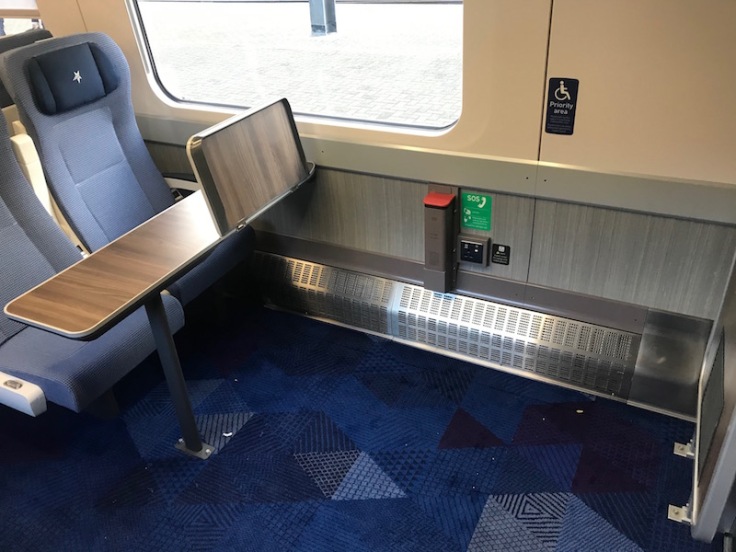 I’m assuming the same arrangements for passengers using wheelchairs apply as explained in my Nova 3 review, that is, standard class passengers and their companion may use the spaces in first class and I guess strictly speaking miss out on the complimentary refreshments – which only amounts to tea, coffee, hot chocolate, cold soft drinks and biscuits/crisps/cake in any event.

First class seats are arranged 2+1 with three ‘tables for four’ and airline style single seats including the inevitable windowless places too at the ends of each coach.

I found the upright position of the first class seats rather too upright while the laid back option was a bit too laid back. I’m probably being far too finicky though!

These Nova 1 trains are bi-mode which comes in very useful on the route they’re on between Liverpool and Newcastle with its mixed running. The trains are in electric mode using a pantograph between Liverpool and Manchester Victoria then switch to diesel through Huddersfield and Leeds to York and then switch back to electric mode with pantograph on the east coast mainline to Newcastle. It’s the first time a train has switched modes twice on a journey.

Accelerating away from Leeds was impressive but even more so when we left York under the wires.

The train I caught was fleet number 820 207 which as you can see hasn’t yet had any vinyl treatment so looked rather anonymous and bare in its base grey colour.

I understand it was its first day out in service having done at least two weeks worth of testing ‘out of service’ so I was a bit surprised it had begun it’s revenue earning life in an undressed state.

This meant there was no indication which coach was lettered A, B, C, D or E for those passengers with reservations and coach E was only identified as first class if you knew what 2+1 seating signifies.

I sat in coach E on my trip from Leeds between York and Newcastle and back this afternoon and was never asked to show my ticket – not even when served with refreshments, which seemed a bit odd.

(I’d taken advantage of split ticketing, using both standard and first class, and buying ‘TPE only’ off-peak returns to travel Leeds-York standard class and York-Newcastle first class all for a Railcard £42.65 return – and managing to book it using one of Northern’s large size TVM’s thanks to help from my Twitter friend Lee Render who I met in Leeds and a ‘floor walking’ Northern team member.)

Heading towards Newcastle we picked up good loads at York, Darlington and Durham as well as stops at Northallerton and Chester-le-Street. At the latter the train manager made an inaudible announcement about the rear coach remaining locked due to a short platform (at least I think that’s what he said). Sadly neither the dot matrix signs or automatic announcements were working and I noticed there were no large tv type screens in the coaches as installed in the Nova 3 coaches.

The electronic traffic light style reservation system was also not working so old style cards were inserted into slots on the seat backs.

There are two three-pin sockets and one USB socket under each pair of standard class seats with each first class seat having both types of socket at the rear of the arm rests. 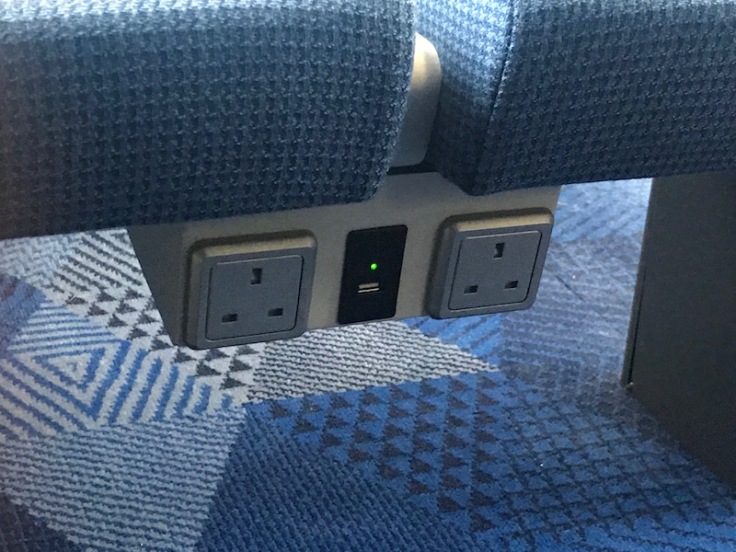 There was Wi-fi but I couldn’t get it to register on my smartphone so gave up.

As on GWR and LNER there were cycle and large luggage stores….

… and vertical luggage racks at the coach ends.

The standard class seat back trays are quite something …

… as is the snazzy carpet….

The driver seemed to open the doors and it was noticeable as the Newcastle bound train pulled into Leeds how long it took between the train stopping and the doors opening – almost thirty seconds. It was better at other stations. The train manager seems responsible for closing the doors.

With a single leaf door at both ends of each coach (as in the Nova 3 coaches) instead of double doors one-third and two-thirds along each coach (on the class 185s) there’s a risk that dwell times will be extended.

However on my Liverpool bound return journey arriving into Leeds at 17:31 with a very busy load after we got hammered at York it was noticeable how relatively short the dwell time was (spot on the scheduled three minutes) and broadly similar to the Newcastle bound class 185 on the opposite platform.

These Nova 1 class 802 trains are a great improvement on the class 185s they’re replacing not because there’s anything wrong with the 185s as a train, it’s just they’re out of their depth and lacking capacity for the job in hand.

TPE have got nineteen Nova 1 trains on order for both the Liverpool and Manchester Airport to Newcastle services which is due to be extended to Edinburgh in December, and together with LNER’s Azumas will make the northern end of the east coast mainline quite a class 800/802 stronghold.