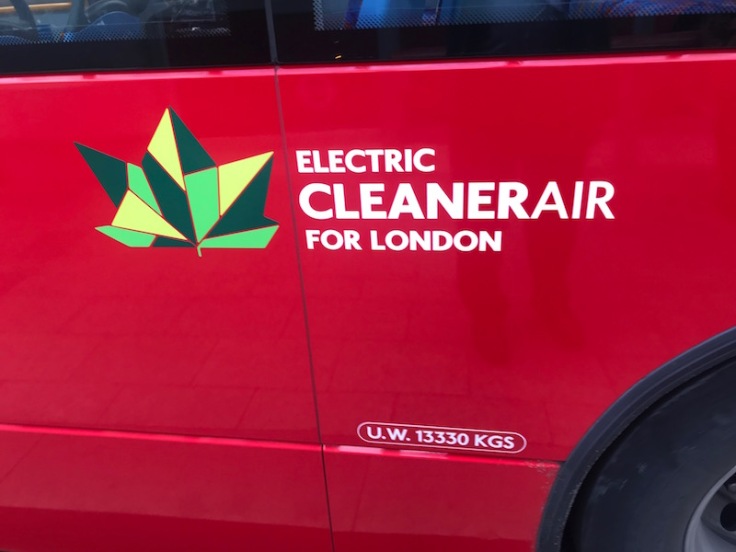 Metroline, the Singapore based ComfortDelGro owned bus company, which operates a large network of bus routes for TfL across north and north-west London has been in the news recently as they roll out an expensive new fleet of 67 all electric battery-rechargeable double deck buses. Having read glowing coverage in the trade press, I decided to take a zero emission bus ride with industry colleagues yesterday afternoon.

In keeping with Metroline’s policy of dual sourcing their fleet from manufacturers they’ve added interest by buying 36 BYD ADL Enviro400 buses for route 43 which operates out of Holloway garage and 31 Optare Metrodeckers for route 134 from Potters Bar garage.

The buses are being introduced gradually on to both routes as they are delivered and passed fit for service. The first BYD/ADL bus began operating on the 43 between Friern Barnet and London Bridge on 1st July with that route currently about 80% converted to all electric running. The first Metrodecker appeared a few weeks later on the 134 (North Finchley to Warren Street) on 19th August with that route currently having around 20% electric bus operation.

Introducing electric buses is no easy task; it’s not like topping up your mobile phone battery by just plugging it into any handy three-pin socket overnight. Recharging a fleet of buses can mean a whole new sub-station and associated infrastructure having to be installed, as happened at Holloway garage back in 2017 when Metroline first began running BYD ADL Enviro200 electric single deck buses on route 46.

This entailed removing the roof from part of a building, knocking part of it down, concrete piling to a great depth and then rebuilding around a newly installed transformer. Several miles of overhead cabling also had to be installed.

It’s been a bit simpler at Potters Bar as the Optare Metrodeckers have chargers mounted on the vehicles which need just a small plug on the wall, whereas the BYDs need large five-foot charging stations. Another benefit at Potters Bar is a sub-station with enough capacity was already in place close by.

Another issue is timescales. Tender bids to run bus routes are submitted to TfL many months in advance and typically around a year’s notice is given to a successful operator. But liaising with UK Power Networks to get the charging infrastructure upgraded, any necessary planning permissions and everything else that’s needed to get started can take up to two years. For example at Holloway two kilometers of road had to be dug up to run a cable from Archway down to the garage – the work is still not complete so in the meantime, Metroline have had to secure other power from the grid.

Each bus takes about two and a half hours to fully charge and then has a range of between 150 and 200 miles, enough for a typical day’s operation on routes 43 and 134. The charging process must be quite labour intensive swapping buses round every few hours.

Bearing in mind all this, it’s not surprising to read Ian Foster, Metroline’s Group Engineering Director, explaining in the trade press that once infrastructure costs are factored in electric buses are “nowhere near commercially viable”.

All the more so when looking at the purchase price of a new electric bus compared to a Euro 6 diesel alternative. Electric single decks are currently priced around £340K versus £165K for a typical diesel equivalent, so bearing in mind a diesel double decker is £230K, the price for an electric double decker must be coming in at least approaching £400K if not more. That’s a lot of money; and a lot of passenger journeys needed to pay for it. 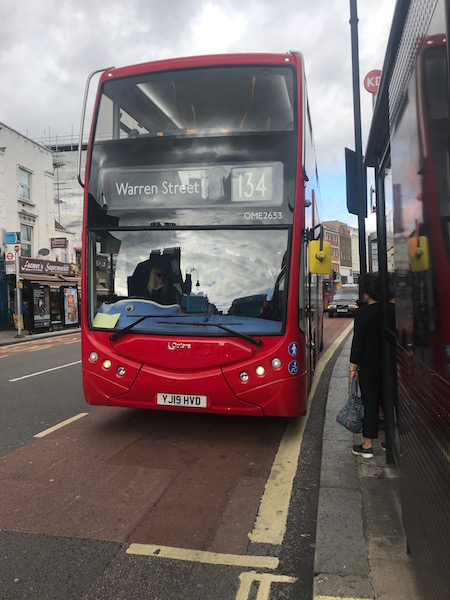 First impressions of the new Optare Metrodecker were very favourable with a brightly lit entrance area in front of the driver’s cab. 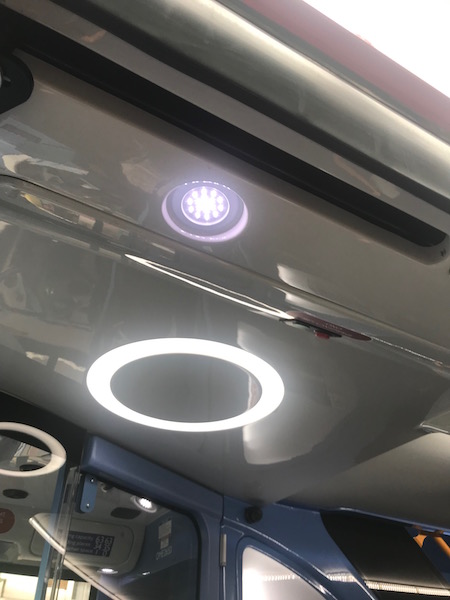 But just past that is a rather odd back lit panel on the stairs which only serves to highlight the ‘official’ (very) small print notices. I would have throught something better could have been arranged for this eye-cathing welcome space? 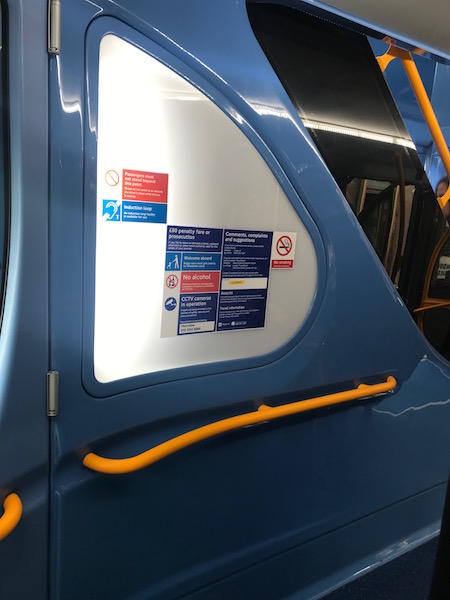 The bus gives a smooth ride and is definitely impressively quiet. Not only because there’s no engine noise to speak of but it was good to see there were no rattle noises either. Travelling upstairs gave a pleasant journey, but if I didn’t know, I don’t think I would know I was on an electric bus. But maybe that doesn’t matter. 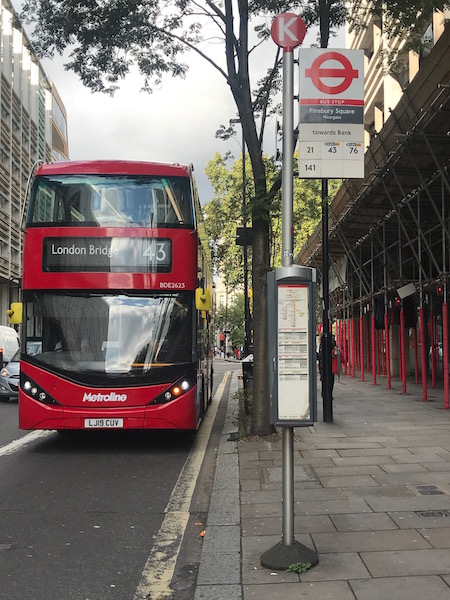 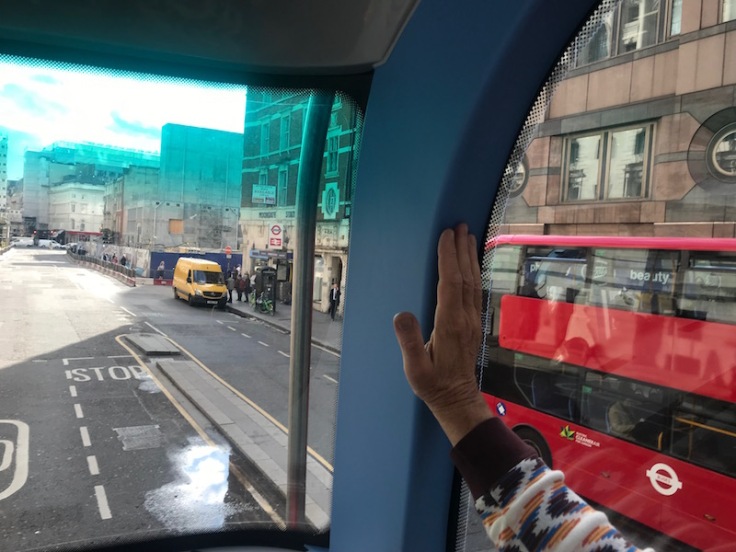 … and some of the workmanship around this area was noticeably slapdash on both the offside and nearside. 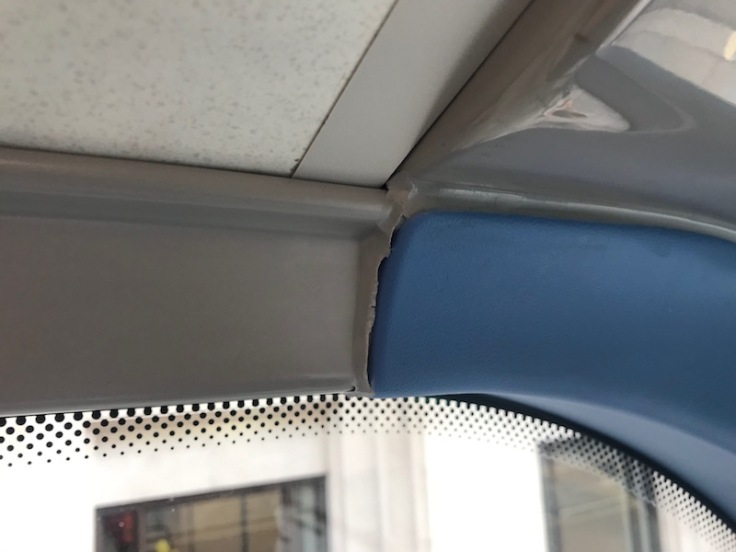 The ambiance and decor is fairly typical for a new London bus on both bus types. The BYD ADL was noticeably lighter by using pale blue formica for the side panels and a large rear window upstairs ….

… whereas the Metrodecker uses a darker material for the plastic type panels….

Bearing in mind the amount of money spent on this whole electric project – the infrastructure and the vehicles themselves – why oh why is the seat comfort and layout on both vehicles so poor. It reminds me of Thameslink – where billions have been invested in infrastructure improvements and new trains yet seat comfort for passengers is dire.

Take a look at the rear seat arrangements on the Optare Metrodecker below…. 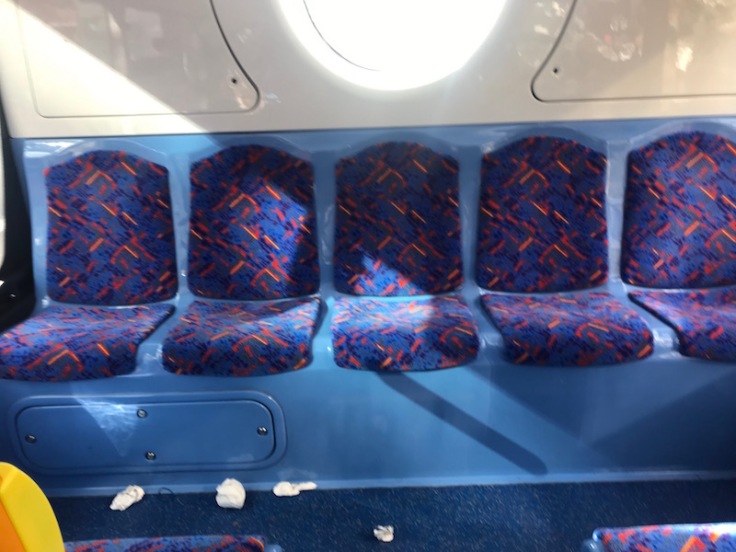 … not exactly inviting on that back row of five is it? And not much room for legs when all four of the double facing seats are occupied but, that’s pretty good compared to the abomination at the rear of the BYD ADL described below.

The Optare Metrodecker has 63 seats compared to the BYD ADL offering 67 seats, but frankly when you see the rearmost four (of the five) seats in the lower deck that extra capacity is of no benefit. 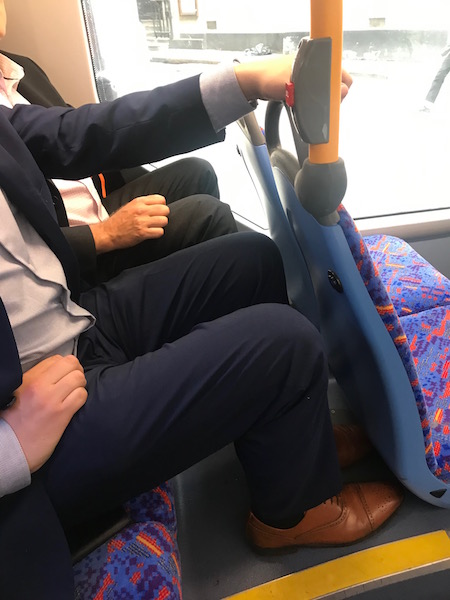 In fact I’d go as far as to say, they’re the worst lower deck seats I’ve ever encountered on a bus; and this on probably the most expensive to manufacture bus I’ve travelled on!

The above photographs show not only the restrictive legroom but also the way the seats have been shoehorned in between the rear gubbins of the bus and the wheel arch.

I can only assume the designer has never travelled on a bus. Can you imagine a car manufacturer selling a car with rear seats configured like this? It would be much better to reduce the seating capacity by four than subject passengers to such contortions. Impressive, it isn’t – any quodos from taking a zero emission journey is lost by the severe discomfort of the ride in those seats.

One other comparison between the two buses are the forced air vents along the cove panels in the BYD ADL, which bring a degree of air flow (there are also opening windows) but are a little noisy when in full flow mode.

These were absent in the Metrodecker.

Both bus types have usb sockets fitted to the rear of seats which is a welcome development for London’s buses and hopefully will become standard, even though many journeys in the Capital are fairly short in nature, it’s a handy facility for those with ‘battery anxiety’ when taking a longer journey. 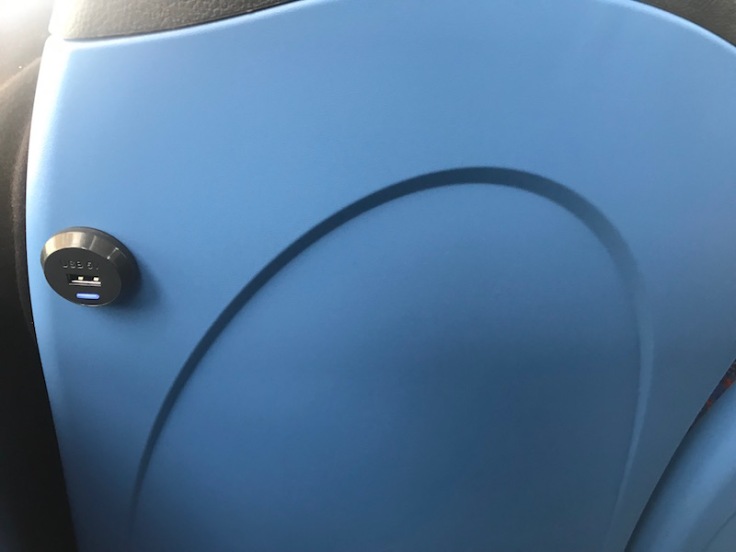 It’s great to see investment in different bus propulsion and steps being taken to address the important issue of air quality and the DfT’s financial support for such initiatives is very welcome but I remain sceptical whether these schemes will succeed in encouraging more passengers to use buses unless as much effort is put into improving the interior comfort as into infrastructure and charging resources at garages.