First improvement in the May 2019 rail timetable I experienced yesterday on my tour around was from my own local station, Hassocks where our disjointed two an hour trains to the Thameslink Core stations and on to Bedford or Cambridge (one an hour to each but to a 40/20 pattern) have been replaced with the new even half hourly Brighton to Cambridge service. Bye bye Bedford it’s been good to know you.

I caught the new 0748 which goes to Cambridge whereas previously there had been a long gap in our peak hour timetable until the 0808 to Bedford which now no longer calls at Hassocks.

It wasn’t surprising on this first morning there were few passengers boarding or on board the train from Brighton, although by East Croydon we’d got busier, and by London Bridge as well as many alighting, there were also many boarding almost certainly unaware they were catching a new and extra peak hour twelve coach train. And that doesn’t often happen in commuter land. It’s a welcome addition to the timetable as are the new Saturday Cambridge Brighton journeys and the Sunday journeys which venture as far south as Gatwick Airport.

Timekeeping on the 0748 had been excellent throughout for this first day; we arrived London Bridge spot on time and through the Thameslink Core with five minutes spare to wait at Finsbury Park (even time for our driver to come back on board for a toilet break) before continuing north with noticeably few passengers on board this extra journey to last week’s timetable. 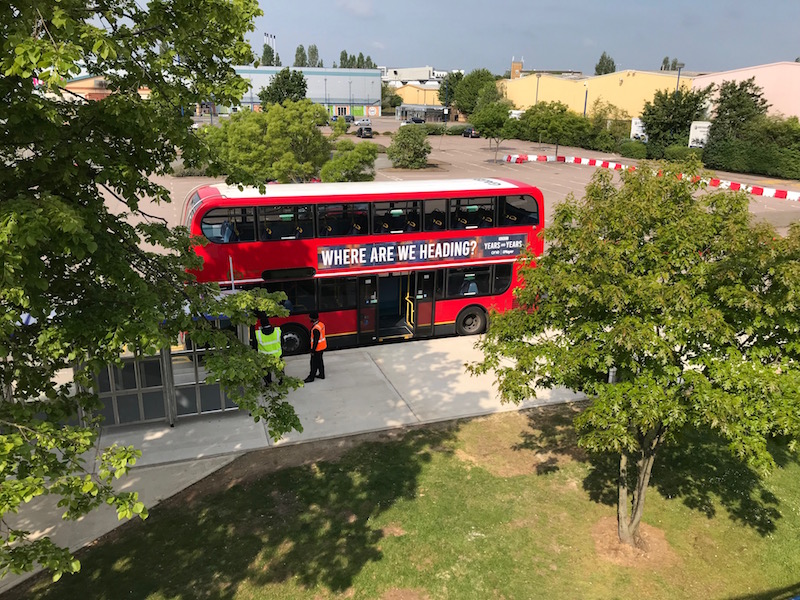 I got off at Stevenage in time to see one of the buses now running the all new Rail Replacement Bus service which has replaced trains to Hertford North while a new terminating Bay platform is built. 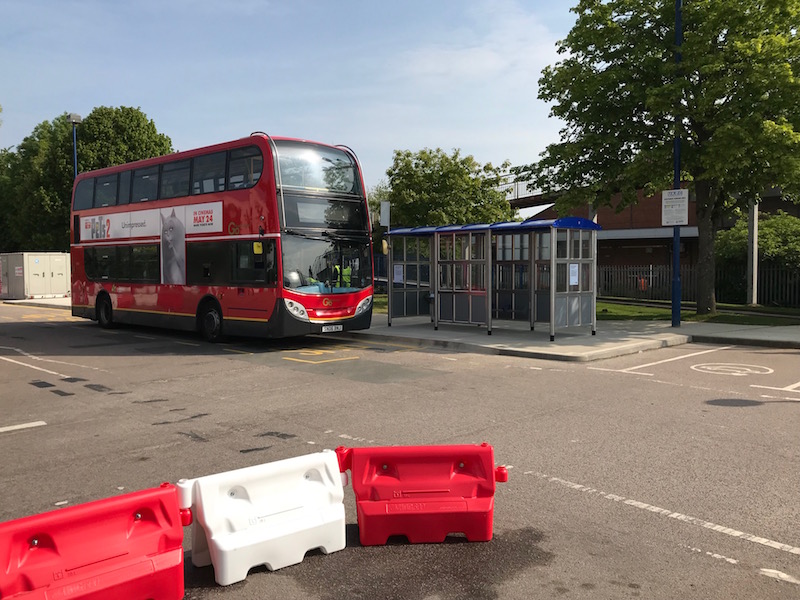 There was only one passenger on the 0937 departure from Stevenage to Hertford North. I’m not sure why this arrangement is happening as the four platforms at Stevenage still look as they’ve always done to me from where the Moorgate terminators terminated, but perhaps more structural changes are ahead.

I headed back south to Finsbury Park on a Horsham bound train (from Peterborough), did a quick cross platform change there to a Great Northern train from Hertford North and down the former City Line to Moorgate.

What a shame the former Network South East tiling and branding is finally being removed from these stations. Moorgate is presumably the first to be rebranded as so far Old Street, Essex Road, Highbury & Islington and Drayton Park remain untouched.

As both Peterborough and Hertford North originating trains arrived and departed Finsbury Park at exactly the same time it was interesting to see just how many passengers dashed across the platform from one train to the other to either make their way towards stations on the Thameslink Core or to Moorgate.

Some interesting journey options and connections to the Underground are now available. I was heading to Liverpool Street and could have changed at Farringdon on to the Underground but decided to opt for Moorgate and take a stroll. 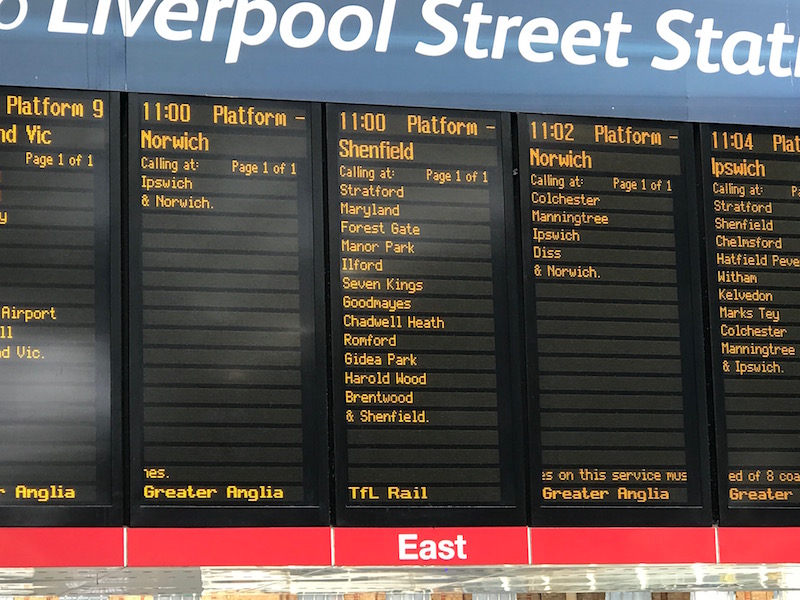 I arrived in good time at Liverpool Street to catch the very first northbound ‘Norwich in 90’ train operated by Greater Anglia at 1100, displacing the usual half hourly Norwich departure with its stops along the way at that time to 1102. 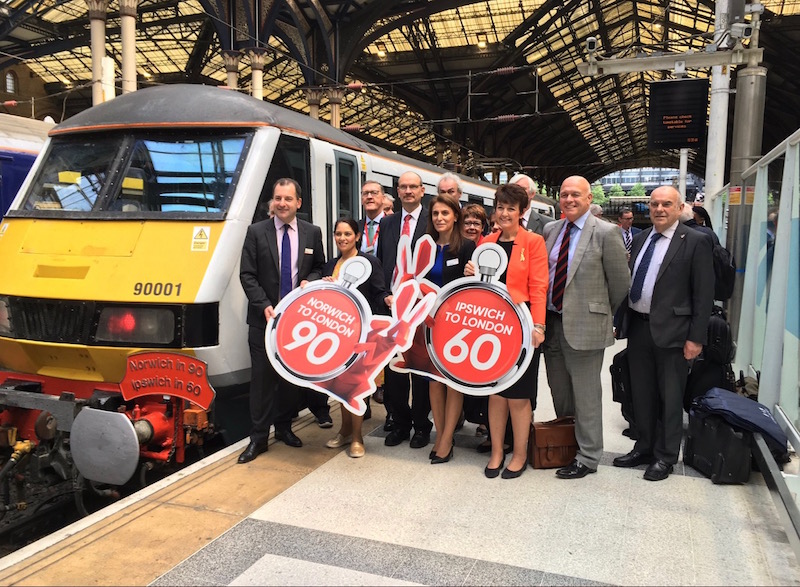 The ‘Norwich in 90’ idea is classic political and PR puff. Great for photo shoots and making out how wonderful everyone is at successfully campaigning for some eye catching achievement and for train companies to pat themselves on the back for responding to such calls for ‘improvements’, but of dubious benefit in the grand scheme of things.

Norwich folk make comparisons between the normal one hour fifty minute journey time for the 115 miles to London with the same time it takes to run non-stop from York over the 200 miles down to the Capital. But that ignores the crucial point that trains running southbound non-stop from York have come from Edinburgh, Newcastle, Durham, Darlington as well as Sunderland and other stations so already have a huge number of passengers on board making for an often full train load to whizz down to London.

The trouble for Norwich is that it’s at the end of the line, and to muster up the same number of passengers to head down to London, albeit with a stop in Ipswich is never going to stack up especially with a decent half hourly train running between the cities all day.

At the moment there are just two 90 minute journeys in each direction utilising one train which sits in Norwich for four and a half hours between the return runs. While the timings work well for Norwichites wanting a day out in London (0900 from Norwich and 1900 return from Liverpool Street) it’s not quite so good for a day in Norwich, unless you like a late start, leaving London at 1100 with a return at 1700.

And it’s that return at 1700, arriving Liverpool Street at 1830 just as the tracks are already stacked out with departing commuter trains which has caused the most consternation among Norwich in 90 critics. It’s meant a whole raft of tweaks have been necessary to create a smooth path for the all important 1830 arrival. Here’s a quick run through courtesy of Today’s Railways magazine …. 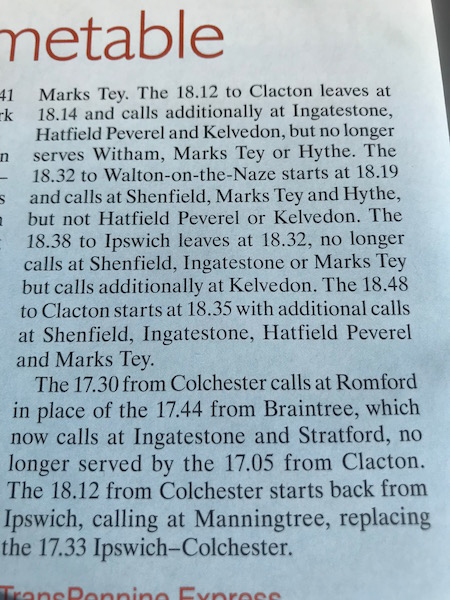 After all that yesterday’s first run on the 1700 from Norwich hit a red signal near Bethnal Green arriving into Liverpool Street five minutes down at 1835.

My 1100 northbound journey fared better as did the first 0900 southbound, both achieving the 90 minute target; just as well with all the red lanyard wearing Greater Anglia staff, VIPs and camera crews on board. 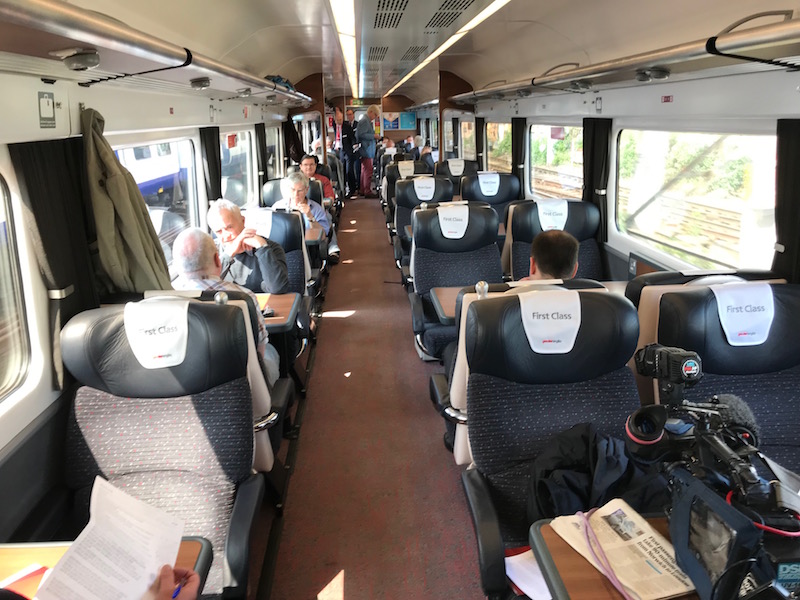 We nearly missed it with a slowing down near Diss, but they’d apparently chosen the fastest pair of engines in the fleet and our driver made up for that hiccup and arrived spot on time at 1230. While the two First Class carriages were well occupied with guests, I did a head count in standard class after we left Ipswich; there were 78 on board who could have all just about fitted into one carriage instead of the seven we had! Meanwhile the former stopping train that left 2 minutes behind us also looked to have a similar load on board as we pulled out of Liverpool Street. 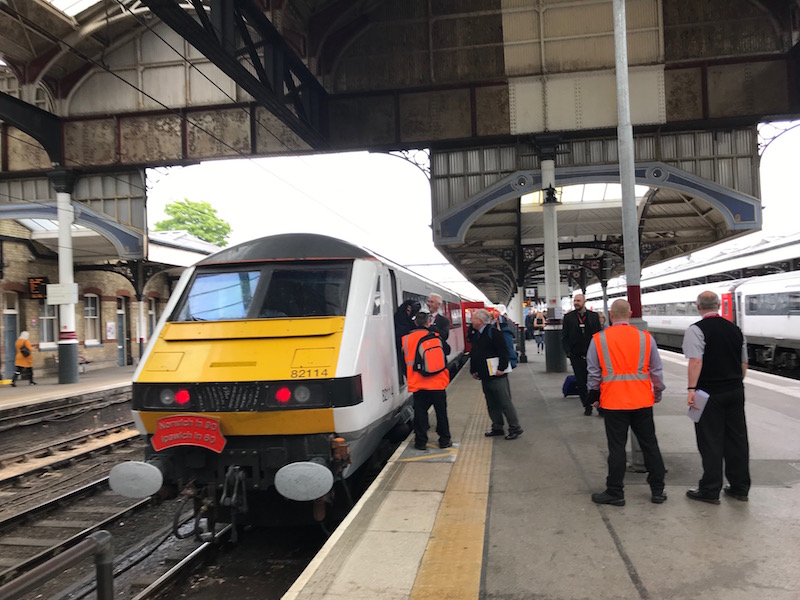 Greater Anglia had hoped to show off one of their new trains on the Norwich in 90 runs yesterday but alas as is the way with new trains, testing is still going on and everything’s running late, so it wasn’t to be. 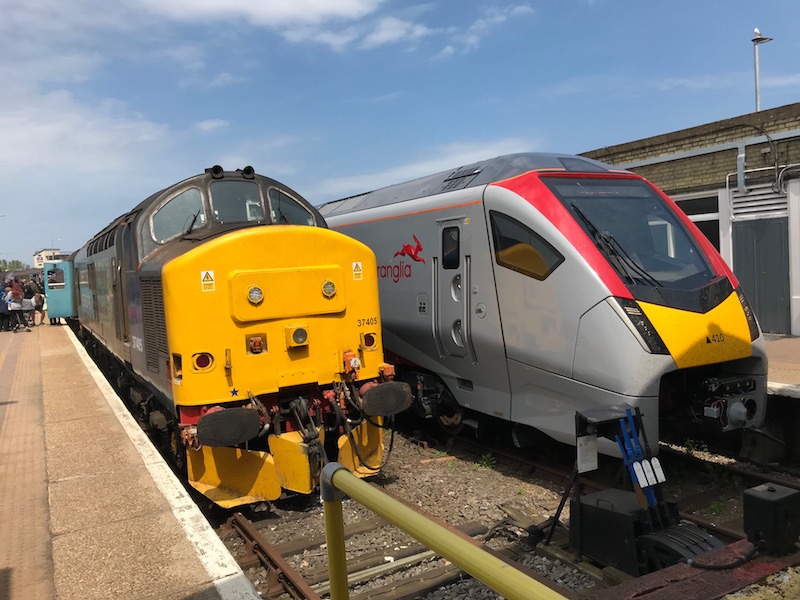 I came across a new Class 745 train on test on my next journey to Great Yarmouth where it made for an interesting contrast alongside the Class 37 engine which had brought us across the wonderful Norfolk Broads and which are still helping to keep the timetable on track until new trains are ready. 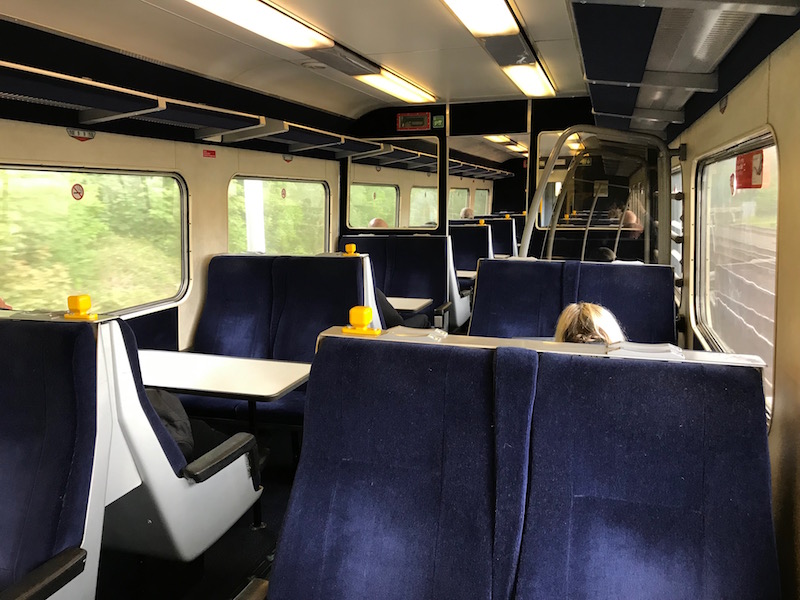 It’s an exciting time for Greater Anglia who are replacing their entire fleet over the next year and I’m sure the positive publicity surrounding the ‘Norwich in 90’ will all help to raise the profile of train travel in the region which has to be good; and it was certainly an impressive ride, if totally uncommercial.

After my nostalgic ride across to Great Yarmouth and back I just got caught up in the tail end of delays due to an earlier signal failure at Ely making for a late running 1357 departure from Norwich to Liverpool. East Midlands Trains were doing their best to recover service and combined the 75 minute late running 1257 departure with our 15 minute late 1357 journey making for a double crewed four coach train and the consequential hiatus over seat reservations. Makes me think it really is time to do away with reservations but I know the arguments for keeping them too, and sway between the two views.

A ride up the East Coast Main Line on an LNER HST from Peterborough took me to Retford …. 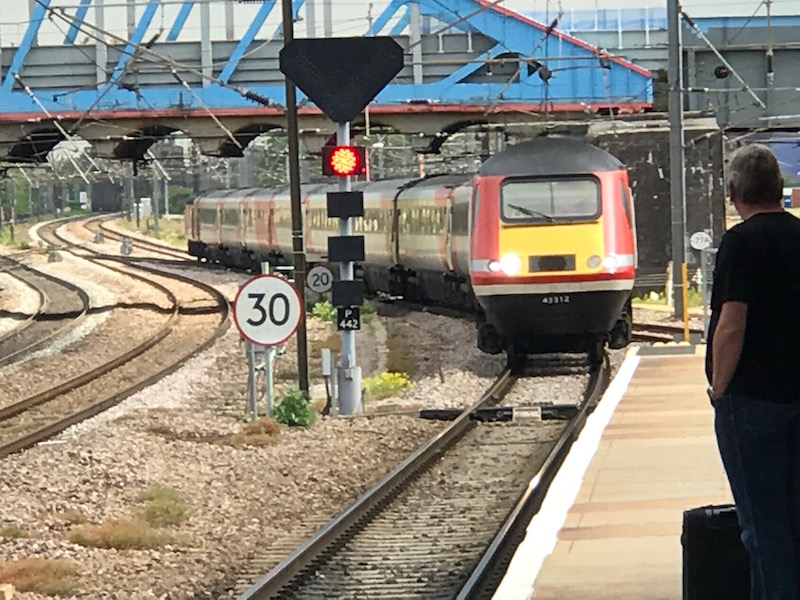 Previously the train would have veered south as it approached Gainsborough and served that town’s other station a mile south of the town centre on Lea Road and then on to Lincoln. Lea Road is a delightful station with a wonderful entrance area lovingly cared for by local people…. 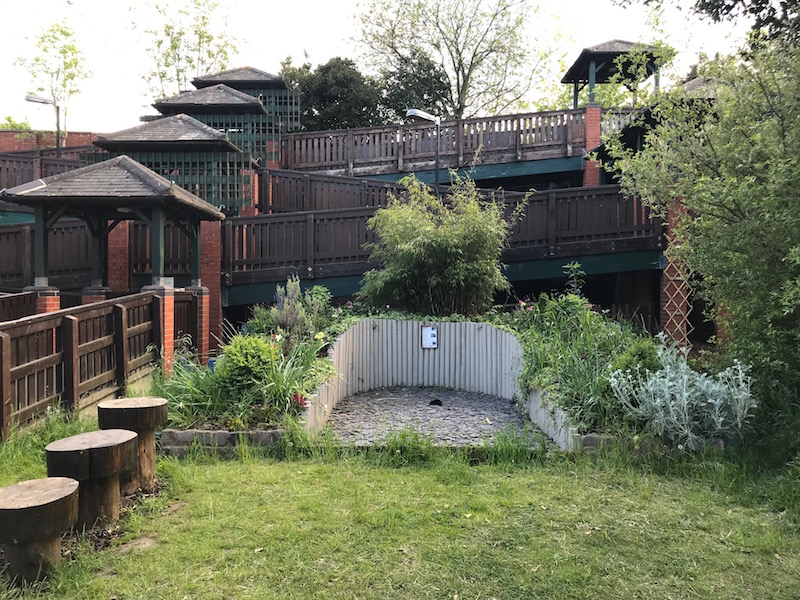 …. but it’s not nearly as conveniently sited as Central, which as it’s name implies is central. And peculiarly used to get a train service just on a Saturday and then only three return journeys which continued on via Brigg to Grimsby and Cleethorpes. These Saturday journeys still run (they give Brigg along with Kirton Lindsey their required ‘Parliamentary service’) but it’s certainly celebratory time for the new look connection back to Gainsborough Central.

And Northern have splashed the cash on some bunting to celebrate.

There were just three other passengers on the 1750 arrival into Gainsborough Central yesterday having left Sheffield at a peak time 1654, but that was just day one and I’m sure as word spreads Gainsboroughites will find the new service a great improvement.

The new timetable has enabled Northern to speed up the previous hourly Sheffield via Worksop and Retford to Lincoln service by missing out the five stations between Sheffield and Worksop in the off peak (leaving them for the new Gainsborough Central train) saving about eight minutes giving a Sheffield to Lincoln in 73; that’s for 55 miles. Not quite Norwich in 90 over 115 miles but it’s a start.

I caught the first off peak ‘flyer’ from Lincoln at 0929 this morning and although we only had 24 on board leaving that wonderful city, we picked up a few at the next two stations, Saxilby and Gainsborough Lea Road before a good crowd at Retford and Worksop when it was foot down all the way to Sheffield and very perceptively a faster journey as we sped by the next five stations. I’m sure once this improvement becomes known it’ll become very popular especially as the train continues to Meadowhall for the shopping centre there on its way to Leeds. 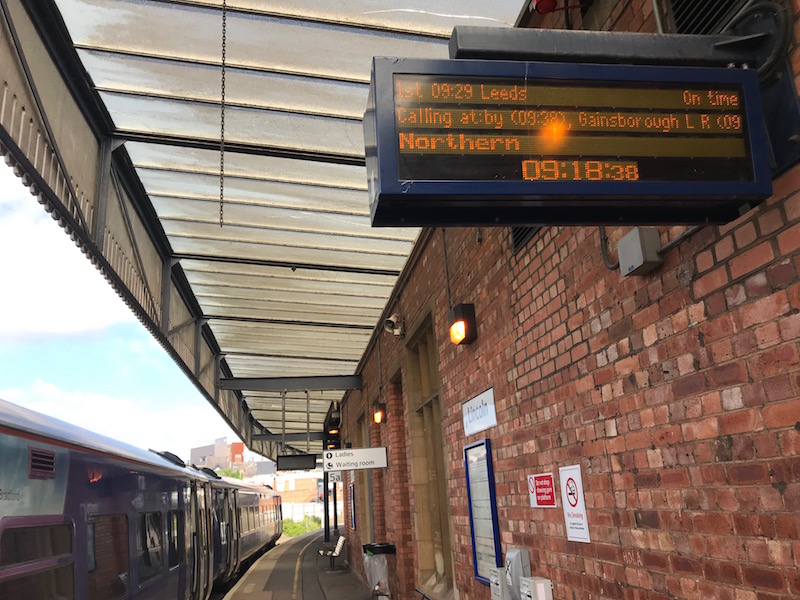 Some passengers boarding in Lincoln wanting Sheffield were puzzled by the train showing Leeds as the destination but I overheard others on board buying through tickets to Leeds so that link up may prove beneficial.

I’m now at Sheffield and about to cross the Pennines to see more new May timetable developments and I’ll describe them in the next blog. 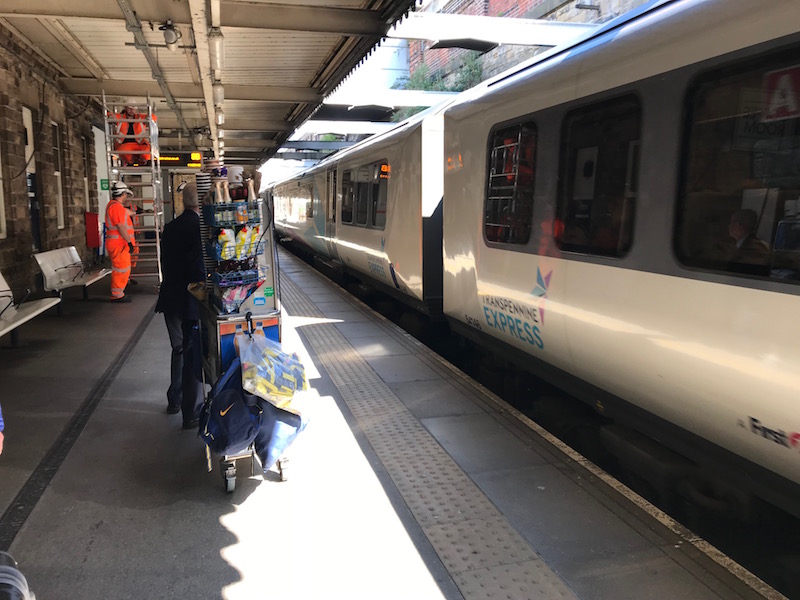 Little tip, always follow the trolley when wanting to know which end First Class is located when it’s not displayed on station signs!

BusAndTrainUser – journeys around Britain by bus and train May’s new timetable on track: Part 1
%d bloggers like this: