I’d seen the build up in the trade press last summer. Another ‘on-demand’ ‘ride-sharing’ ‘app-based’ ‘innovative’ minibus service due to start running between central/north London and Luton airport from October 2018.

The operation called ‘Blue Bus’ would “drop you off as near to your home as we can”. Obviously there would be an “Uber-style app … matching customers to the closest pick up point”. It sounded too good to be true to be covering all of central and north London. I bookmarked it to follow up the launch with a ride.

October 2018 came and went but no news of the new service starting. I emailed Blue Bus founder and owner, Tazio Puri Negri to enquire about progress and he said he’d “keep me posted”.

I heard no more until last week when a fullsome effusive  four page article appeared in the same trade magazine confirming what was now called B.Bus has been up and running for a month ….. and “we already carried around 20 passengers in the first two weeks”.

The article continued “at the moment the service is offered 7am till 5.30pm and is only available between Luton Airport and central and north London …. the long term strategy is to cover all the major airports of London. Gatwick is planned as our second expansion. There are even plans for airports to be served outside of the UK, but currently the Luton operation is where the focus for the time being will remain”. Just as well.

Unable to resist trying out anything new (and innovative) I downloaded the prerequisite B.Bus app, registered as a customer, and made my plans. 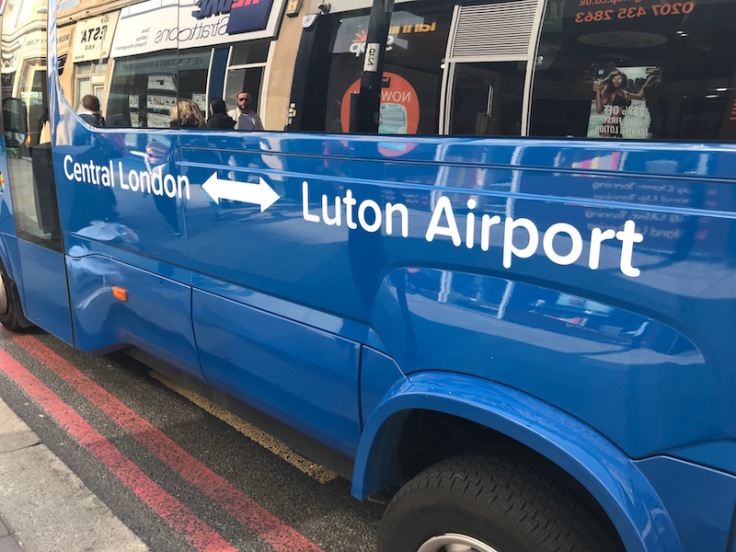 I must have missed the bit when it said pick ups/set downs are initially only in the Paddington and Bayswater area, and it could well be my personal technical limitations at how to use apps but I found I could only default to having Luton Airport as the origin rather than destination for my journey.

Undeterred I headed off to Luton airport today to give B.Bus a try for a central London bound journey.

I’m sure it was something I’d not ticked or perhaps unwittingly opted out of, but arriving at the airport, my app wouldn’t accept any destination I entered despite using the inbuilt map or typing its name in manually. It got as far as telling me Paddington was a 3 minute walk away from Paddington Station but that’s as far as I got.

I decided to try the nuclear option of deleting the app and starting again. Trouble was the App Store wanted Wi-fi and I found my phone fighting between the various Wi-fi offers from National Express, Green Line and Arriva vehicles arriving and departing in the coach station – all of which need logging into or getting their own back by blocking Internet access. Increasingly frustrated I took refuge in the Terminal building and used their Wi-fi.

App successfully downloaded again and having logged back in as an already registered customer, I impressed myself with finally successfully booking and paying for a journey to Paddington and very impressively being advised a bus would be with me within 10 minutes. All I needed to do was take a 9 minute walk to the drop off/pick up point for cars and non scheduled coaches as B.Bus doesn’t come into Luton Airport’s coach station right in front of the Terminal building.

I’d looked on the app on my way to the Airport at likely waiting times and saw what looked like an hourly service so was well chuffed to have dropped lucky at just a ten minute wait.

I received a confirmatory text at 1306 that my journey was booked and scurried off to try and find the rendezvous point in ‘Drop Off zone area Bay F’ ready for a 1316 departure. This was impressive stuff.

Once I’d worked out which way to walk it only took about five minutes and although the Bay letters are marked and positioned for the convenience of drivers and hidden from approaching passengers (other than Bay O) I eventually found Bay F and waited.

By 1330, fifteen minutes after my driver Simon had been due, I began to have that nagging feeling this wasn’t going to work out well. By 1345 I was on the point of giving up. The problem being there’s no contact details in the app and replying to the confirmation text just brought back ‘message not delivered’.

Luckily a bus industry insider had the mobile phone number of B.Bus owner Tazio Puri Negri so I gave him a ring to find out what was happening. A colleague answered and said he’d look into it and call me back within five minutes.

Which he did. Simon would be with me in twenty minutes and I’d be refunded my £7.99 fare. Sincere apologies were given with Simon’s non appearance put down to a software glitch which had shown no bookings for the afternoon. 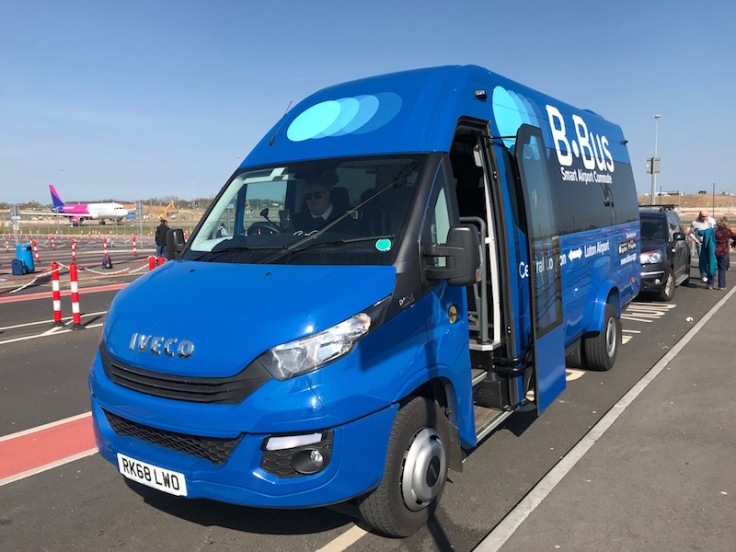 Simon duly arrived with me at 1430 and I was finally on my way. We had a nice chat as we drove down the M1 and encountered only a short stretch of slow moving traffic near the M25 delaying progress and some minor delays on the Finchley Road. 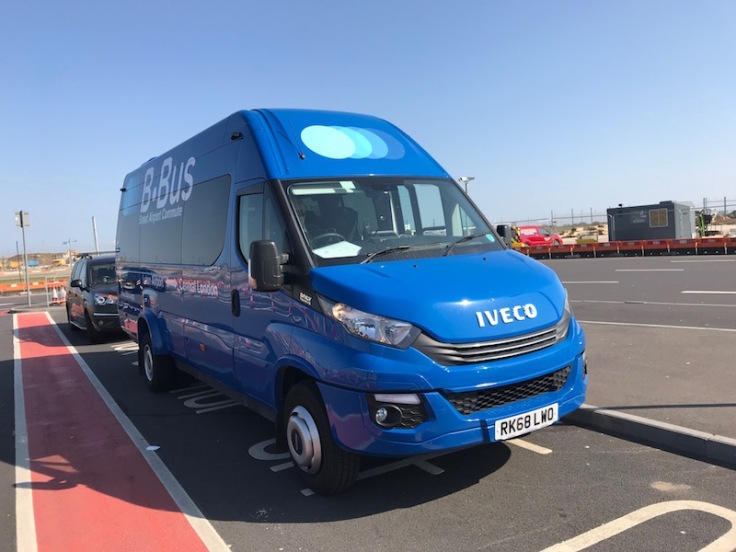 Simon explained he’d got seriously delayed on the way up to the Airport by a crash on the M1 and also apologised for keeping me waiting as I boarded. I explained that I understood there’d been a software problem and he acknowledged he hadn’t received details of my booked journey. 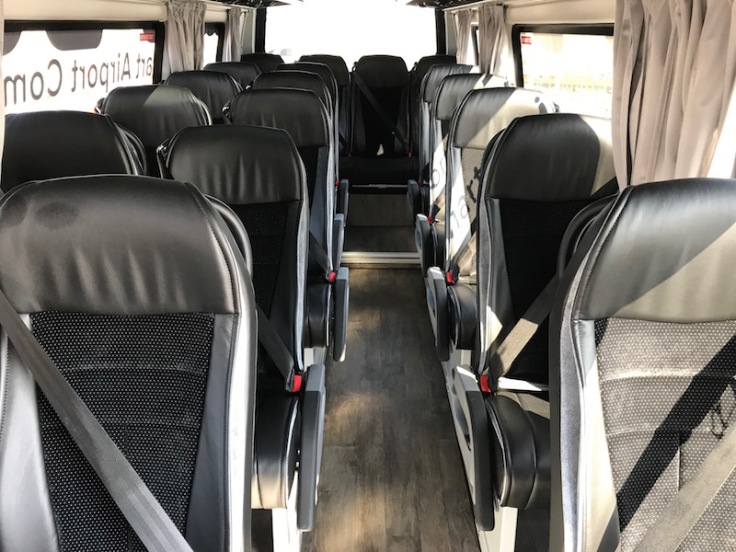 The Iveco minibus is comfortable and its nineteen seats give good leg room. A usb socket is available in the side panels. There is Wi-fi but my phone didn’t seem to pick it up. Three of the minibuses are natural gas (CNG) powered necessitating a special trip to fuel up in London while the fleet has another similar three diesel powered Iveco Daily Tourys vehicles. 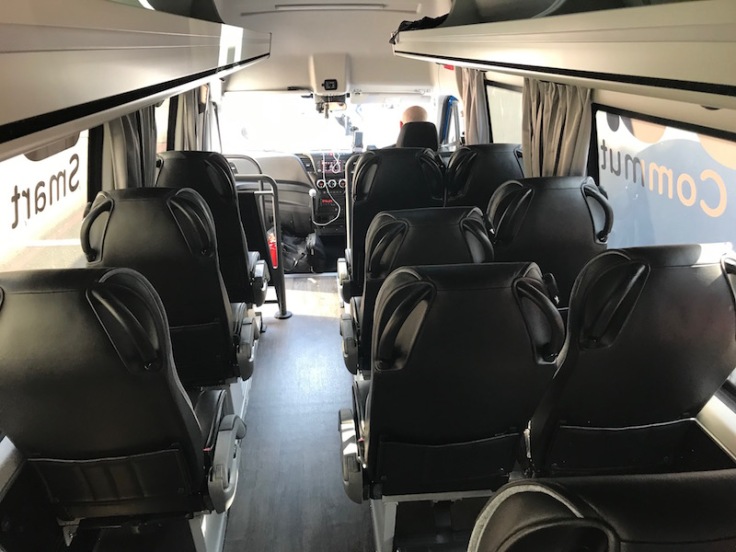 As we approached the end of the M1 Simon explained he was getting tight on drivers’ hours as he had to get back and fuel up before finishing his duty so we mutually agreed it would suit us both if I bailed out at Finchley Road and I’d jump on the Jubilee line and Simon could head back north before the homebound rush hour hit the M1.

It had taken 50 minutes to reach Finchley Road from Luton Airport and we bid our farewells.

Tazio and his B.Bus team are joining a highly competitive central London to Luton Airport market. Who can forget the legal battles between Arriva’s Green Line and National Express over the airport coach station access a few years ago. No wonder B.Bus is banished to the outer fringe of the airport although that presumably means a nice saving on departure charges.

The £7.99 fare is a bargain; setting aside software glitches, if I was a regular passenger needing to get to the Paddington area and was able to easily master the app and could summon up a comfortable luxury looking minibus to arrive within ten minutes, that’s a very attractive proposition at a great deal. When I travelled on Arriva’s Green Line 757 last September it cost £11 one way to Victoria.

On the strength of today’s experience though, it’s going to be a monumental task to make it a commercial success. Sure there are lots of hotels in the Paddington/Bayswater area and no doubt a percentage of their visitors pass through Luton Airport but I’m not convinced that market is big enough to sustain six minibuses.

As ever promotion and getting the service known in the marketplace is a Himalayan mountain to climb, and very costly too. It’s early days but I couldn’t see a social media presence (certainly the link from the app doesn’t work) and I can’t find a website by Googling ‘B.Bus Luton Airport’ or anything similar.

Apps are the current fashion but why not run a scheduled hourly shuttle on fixed times between Paddington and Luton Airport – at least we’d all know what to expect and when to expect it rather than the lottery of whether a minibus is around and can be with me “within minutes”.

It might be today’s software glitch but when I tried to rebook my journey the app was telling me “There are no buses available at this moment please try scheduling a ride”. That’s not much good if I’ve just stepped off the plane especially when trying to schedule a ride, the app could only offer me a journey tomorrow morning after 0730. 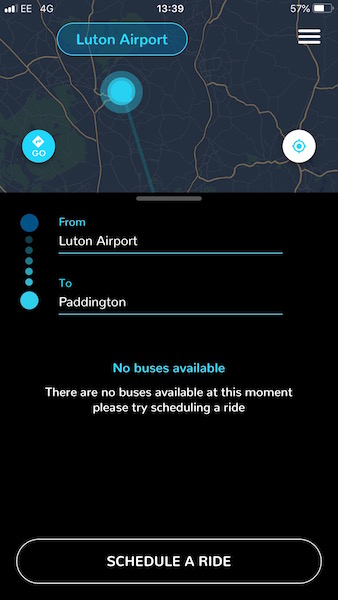 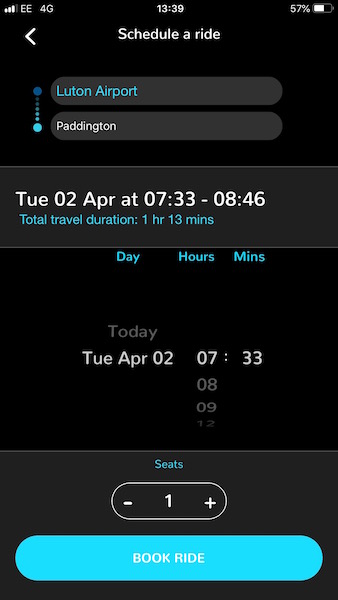 It’s always good to see new services being tried and I wish Team Tazio good luck; I think they’ll need it. I wouldn’t worry too much about those expansion plans for Gatwick and other airports just yet though and definitely and urgently get today’s software glitch sorted. 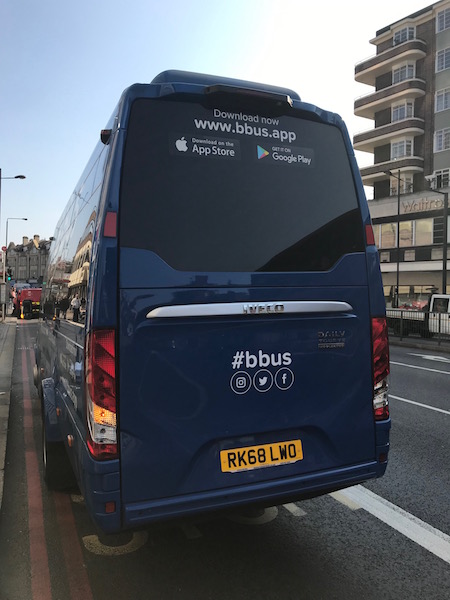