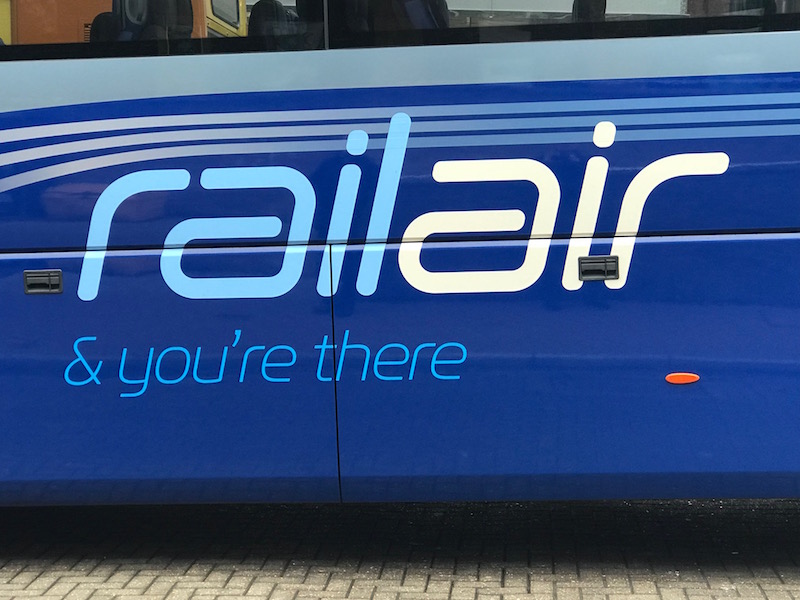 The recent launch of First Bus’s nine brand new Scania Irizar i6 bodied K-series coaches for its prestigous RailAir nonstop service linking Reading Station with Heathrow Airport attracted a shoal of positive comments on Twitter and in the trade press so I thought I’d give it a road test today.

All the more so as I realised I’d never actually travelled on this bespoke route before; living in Sussex I don’t have much need to reach Heathrow from Reading, although back in my student days at Reading University in the early 1970s I remember trips up to London on Thames Valley’s (sadly rebranded Alder Valley in its ill fated merger with Aldershot & District) infamous routes A and B which took an age to reach London; and I really can’t remember whether one of them nipped into Heathrow to serve the airport on the way.

These new coaches do look very smart indeed in their attractive Best Impressions designed livery. Sleek lines, lovely blue and grey colours and an attractive no-fuss typeface and logo with the slogan ‘railair & you’re there’. The professional design’s a world away from the busy bus-crash style message overload which befits some of First’s bus fleet in metropolitan areas (Leeds I’m looking at you!).

The step entrance is noticeably nice and wide, and, naturally the coaches are equipped for wheelchair accessibility, although sadly three days advance notice is required if you want to travel in a wheelchair. It looked like it’s much more than a five minute job to remove the seats that make way for a wheechair.

The gorgeous interior design matches the exterior and really is very attractive and welcoming, as are the 47 seats including twelve arranged around three tables spread through the coach. USB sockets are available as is wi-fi, although I couldn’t get a connection on my journey. 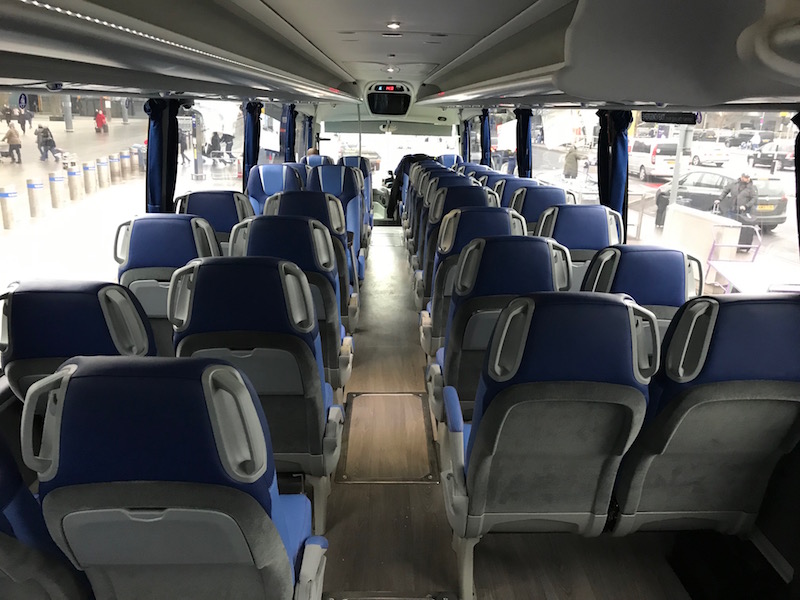 The seats really are the most sumptuous and comfortable I’ve travelled in for a long time, and all the more so for passengers making the transition from a Class 800 IEP train and its rather unwelcoming seat comfort and transferring in Reading over to this luxury and comfort for the onward journey to Heathrow. It even beats First Class on an 800. 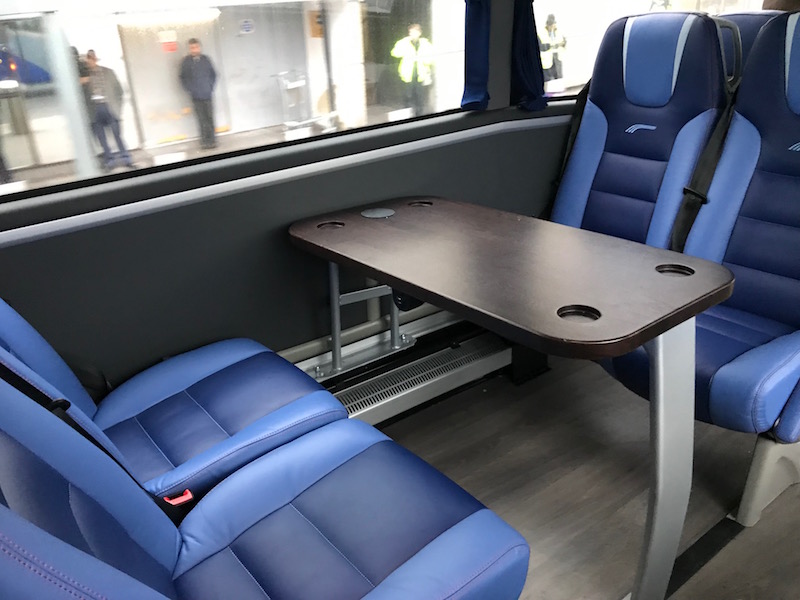 As I showed on Twitter this afternoon, there was a rather disturbing amount of vibration on the table surface as the coach tackled the uneven road surfaces, especially on the M4 where long term roadworks are upgrading it to a ‘Smart Motorway’. That aside, the coach really did glide along and I found it a smooth enjoyable ride. The plaudits are well deserved.

One or two observations and suggestions about RailAir: we set off exactly on time at 1300 and after seven minutes in free flowing off-peak Reading traffic reached the A329(M) at 1307, joining the M4 five minutes later at 1312. The motorway’s temporary 50mph speed limit impacted our speed until we reached the end of the roadworks by Junction 7 for Slough at 1325 when we speeded up, reaching the M25 at 1333 with a smooth run round to Terminal 5, our first drop off two minutes early at 1338 where four passengers got off and we left on time at 1340. Four more alighted on time at Terminal 2 at 1352 with our final two passengers deposited at Terminal 3 at 1358, just two minutes down. We reached Heathrow’s bus station at 1402 (instead of 1400), and the coach got ready for its 1410 departure back to Reading.

Ten passengers may not seem many, (around the same number took the previous journey from Reading at 1240 – the service runs every 20 minutes) but at a fare of around £20 (for both single and return) that’s not bad going for an hours work.

I booked online in advance last night, but there are a few inconsistencies with the booking arrangement. The RailAir website advises passengers must book online at the latest by 5pm the previous day, yet I found I was able to book at about 8pm without any difficulty, so that seems an unnecessary restriction. Once you receive your email confirmation and ticket, it contains the instruction “YOU MUST PRINT YOUR TICKET AND SHOW IT TO THE DRIVER”. Not only is this in block capitals but is repeated twice more and a similar warning is contained on the website. 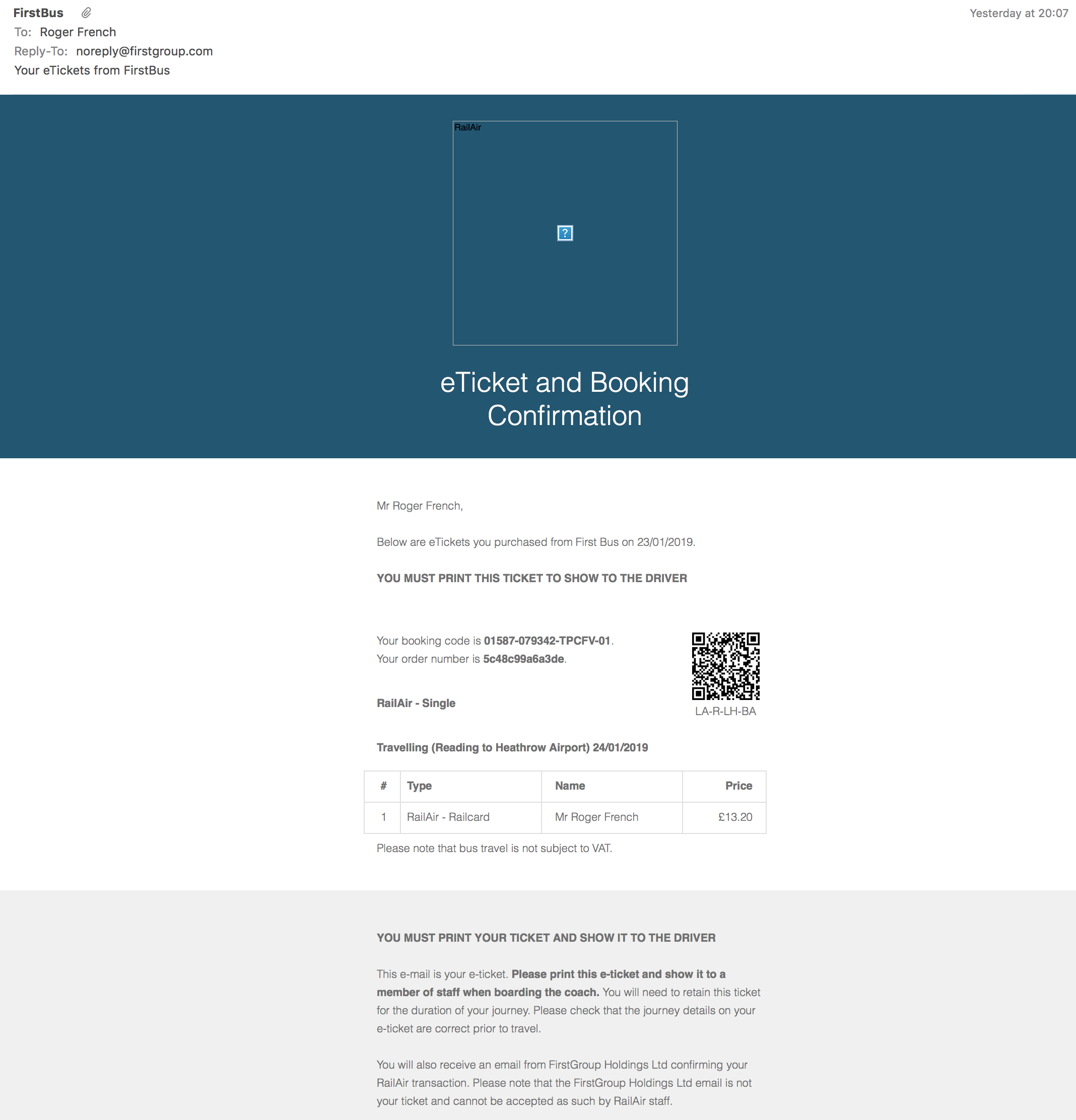 The only problem for me was my email came with a large promotional graphic which didn’t fully download in any event, which took up so much of page 1 of the 3 page email I MUST PRINT OUT that what looked like the all important QR Code was split between page 1 and page 2! Not being a computer expert and knowing how to change the settings I was a bit befuddled!

In the event, the railair representative in the lounge at Reading Station confirmed it’s quite in order to simply show the email to the driver on a smartphone, and indeed my driver was very happy to see it that way!

The reception area at Reading Station has also been given a much welcome Best Impressions designed makeover and really looks quite splendid inside with its TV screen showing the latest news, complimentary newspapers (The Times at that too), complimentary hot drinks machine, comfortable seats as well as seats to sit and work at. It made up for the ineptness of the website booking arrangement to be honest.

Another small inconsistency is that the only benefit of booking online is for an ‘Early Bird’ ticket, defined as booking more than three months before travel; otherwise, despite the messages, despite the 5pm cut off, there didn’t seem to be any difference between online prices and just paying in the lounge or to the driver.

I was pleased to see the main Railcards are accepted for a third discount, which meant my fare for a single journey was £13.20; which I ranked as good value for the service provided.

Bearing in mind railair is operated by First Bus and GWR has long been in the hands of First Group, you’d think there’d be close working between the two companies. There’s a lovely railair leaflet I spotted at Reading, but I’d be surprised if it was to be found at stations westwards to the West Country and South Wales. Although I did spot a GWR leaflet giving details of links to many airports from GWR’s network which included mention of RailAir.

There are signs for the RailAir coach inside Reading Station and commendably departures appear on screens and therefore on apps too. I was surprised there wasn’t better signage directing you to the departure lounge as you exit through the barriers and would suggest this would help those unfamiliar that this gem is hidden behind M&S Simply Food’s central outlet. 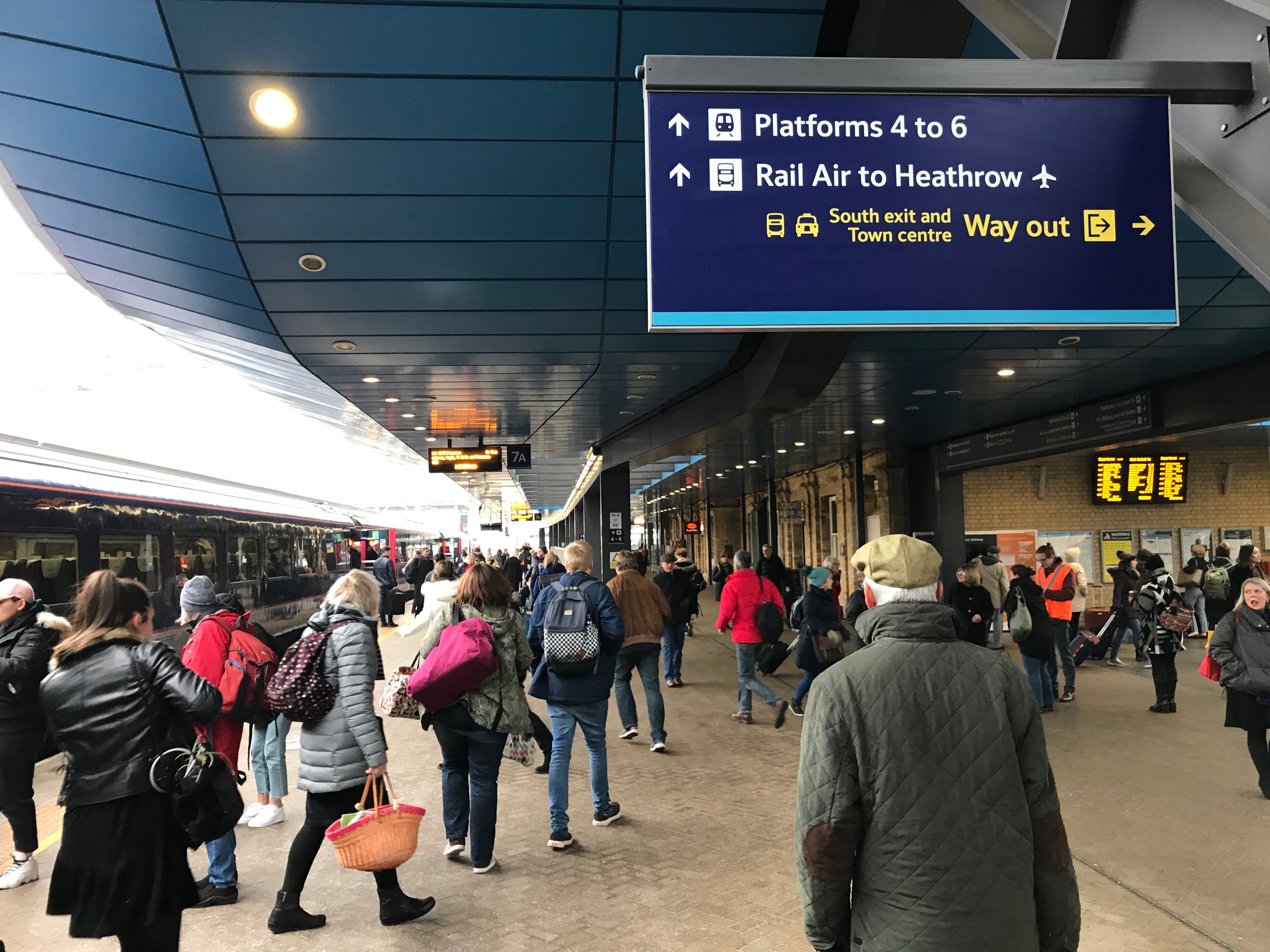 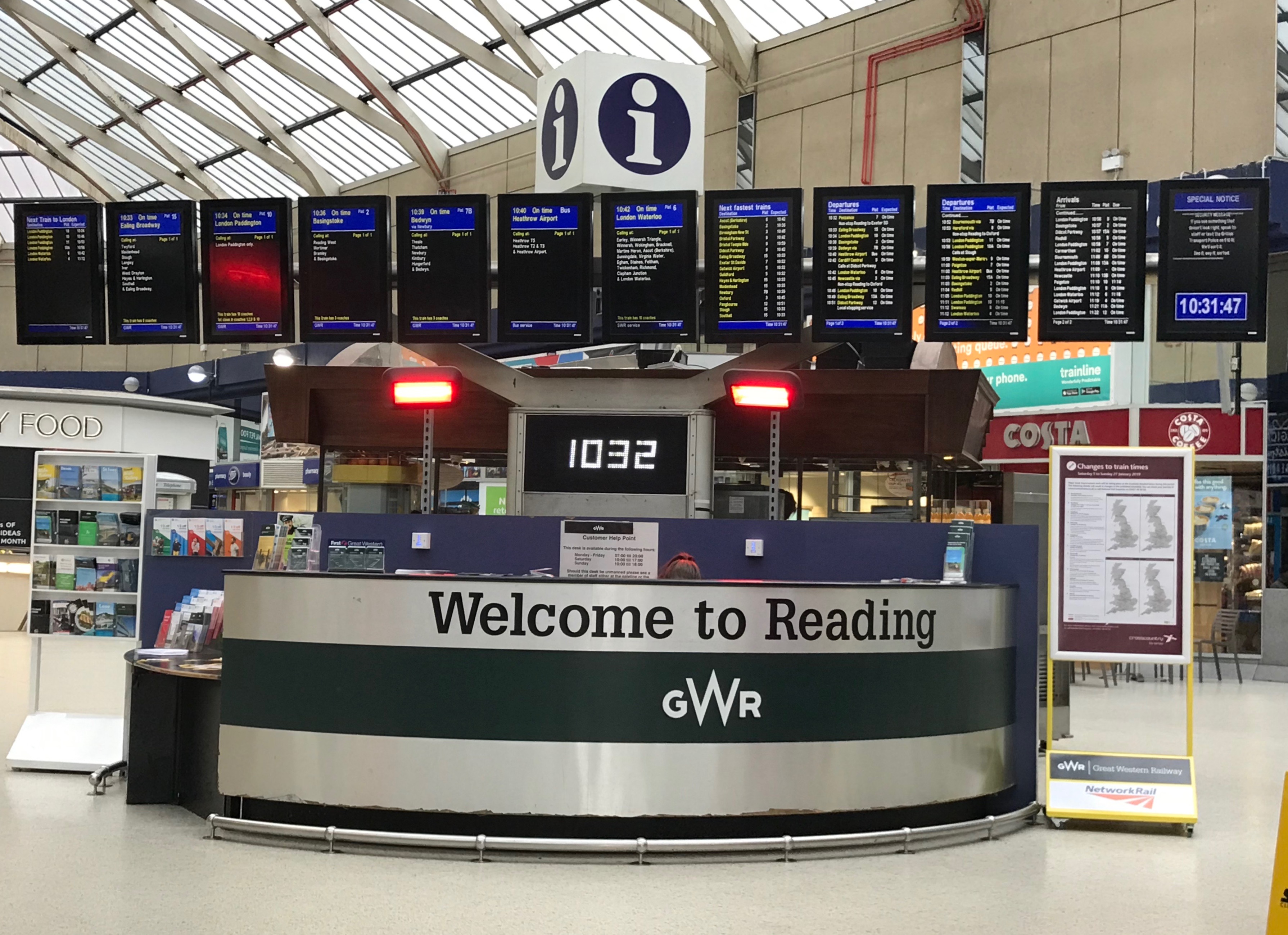 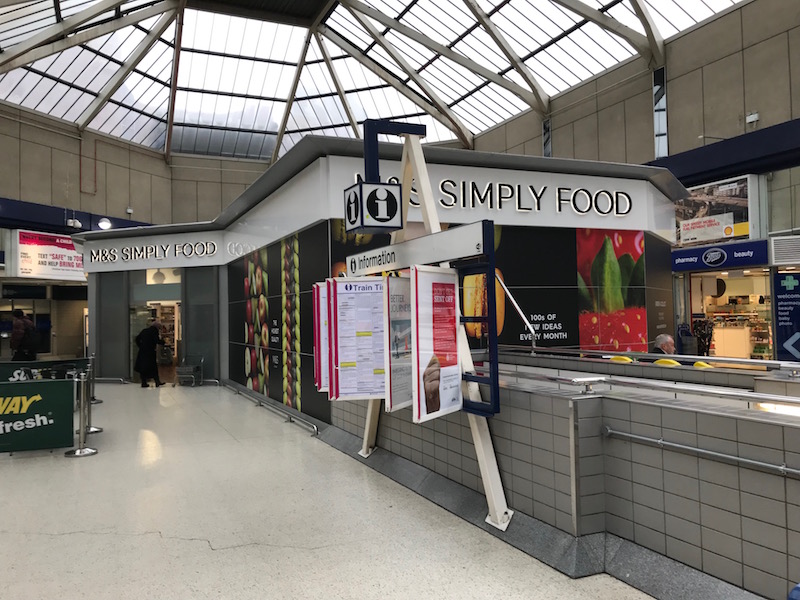 I would also suggest ways be found to include the service on National Rail’s journey planner. I caught the 1158 from Newbury arriving Reading at 1220 giving a good connection with the 1240 railair departure (had I needed it) which would’ve got me to Terminal 5 at 1320. However, if you put Newbury to Terminal 5 in the Journey Planner it will take you into Paddington and out again on the overpriced and extortionately expensive Heathrow Express arriving Terminal 5 twelve minutes later at 1332. Pay more and arrive later; I don’t think so!

The long term future of RailAir is in some doubt with talk getting louder about constructing a new western link into Heathrow from the Great Western main line. At the pace of change on the rail network it will be some time before we see such a development, so in the meantime these new coaches are indeed very welcome; well worth a ride and you’re there.

5 thoughts on “railair & you’re there”