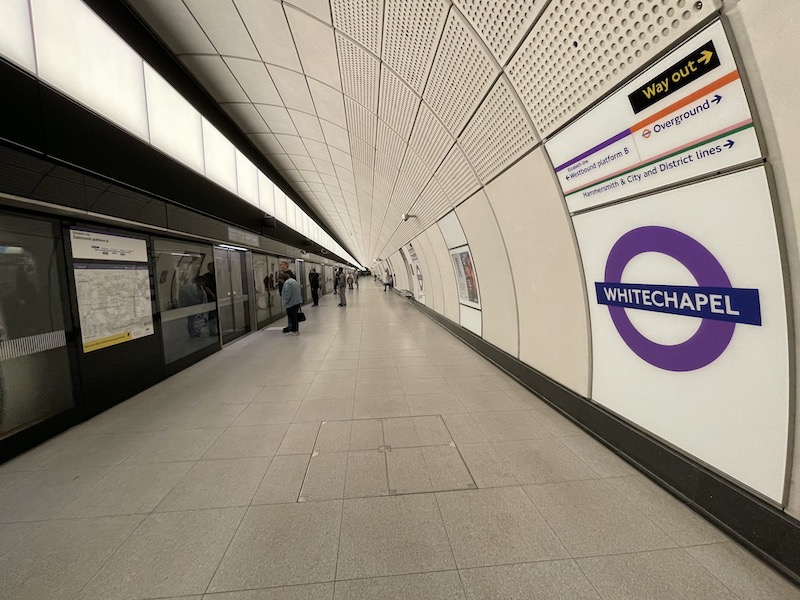 The much-delayed opening of Crossrail / Elizabeth Line once again raises questions about the corporate culture of TfL and the medium-term financing of the transport behemoth.

The vast, clinical stations are now open, the shiny Bombardier trains are running, smiling families are excitedly trying out the new journey opportunities, and the media is – for once – happy. But pop along at the high peak, and the situation is more worrying – are there really enough passengers ?

And what does the recent history of the project tell us about TfL more generally ?

My sense is that the long golden age of TfL’s Blair Era subsidy-driven spending, which began in 1999, has just ended.

In summer 2018, serious people – up to and including the TfL board – apparently believed that Crossrail would open that November.  Even a non-technically-minded observer, who had casually noticed the status of the construction works in central or east London would have questioned whether this was likely or feasible. Quite how the contemporary TfL leadership team, some of whom had held railway operating roles, ever believed this is another matter entirely.

Within 3 months, the project experienced a 3-year delay, and a circa 3 BN overspend – taking it back to the kind of out-turn cost that had been repeatedly rejected by HM Treasury as unaffordable during the scheme’s 30+ year gestation period.

The overspend is therefore equal to the entire project budget as estimated in 2000 by the then-Strategic Rail Authority (SRA), albeit for a rather more modest version of the scheme than as actually built. Even allowing for the more limited scope of the 2000 version, it is worth remembering that this project was rejected by HM Treasury as offering poor value for money.

To TfL’s ( and train operating contractor MTR’s) great credit, the operations appear to run smoothly, and public reaction has been positive. But the general public and Britain’s arts-educated media class have no grasp of the finances of such projects, and we have since heard the predictable complaints about why project approval was ever delayed, and ‘why can’t we have more such services?’ – including in the northern “blue wall”.

On the first question, the answer is that Crossrail always generated a mediocre Benefit Cost Ratio, for the simple reason that although the benefits were high, the costs were simply enormous. The 2022 out-turn bill will do nothing to strengthen the cause of heavy rail projects within Treasury thinking – especially at a time of public spending constraint. Crossrail now sits alongside Eurotunnel, High Speed 1 and the provincial light rail projects as a costly investment that is simultaneously, and broadly, perceived as a political success, but which is likely to undershoot the traffic levels which justify the expenditure on objective grounds. Anyone who has ever travelled on the extremities of Manchester’s Metrolink, or Sheffield Supertram, (or the outer ends of the Central Line) and taken a moment to count the passenger loadings will know what I mean.

All such objections are routinely described in the railway press as “Treasury short-termism”, but the reality of economics is that money spent on Crossrail (or trams in Sheffield, or High Speed 3) is taxpayer cash that could have been spent on hospitals, or road improvements, or electric vehicle charging points.  Contrary to media consensus, we live in an age in which public spending has already reached a 40-year high, and deficits are further threatened by the cost to government of rising interest rates. We are not far from the kind of financing environment that forced the Labour governments of the 1970s into drastic emergency spending cuts to ensure their ability to finance government on international debt markets. And I mean actual cuts, not ‘cuts in the rate of growth in spending’ which many politicians and their media out-riders routinely describe as “austerity”.

On the second question – why not in Manchester or Stoke ? – the answer is that none of the northern or Scottish conurbations is remotely large enough to justify such colossal spending.  They are simply too small, and the advocates of such city-region projects implicitly require that their pet schemes should be funded from London, not by local taxes. Regional mayors and the transport industry need to be more realistic about what is needed, and fundable. Manchester should see itself as a competitor to Lyon or Hamburg, not London, Paris or New York. These cities urgently need a larger local tax base, and more locally-rooted private sector growth. This is unlikely to come from building more tramways, but the UK political class has yet to define any growth recipe other than a vague commitment to better ‘infrastructure”.

TfL’s 2021 Plan shows a Liz Line operating surplus (the excess of revenue versus day to day, non-capex operating costs) of 265m in the first year. By 2024, TfL were budgeting for a more than 400m surplus.

Every 5% shortfall will cost TfL between 50-70m pa. A 20% shortfall wipes out the entire surplus – and that’s assuming that operating costs are in line with plan. Given the state of post Covid rail demand, and upward pressure on wages and energy, this now appears hopelessly optimistic.

The issue is not that the central section of the Liz Line will be empty, but that the overall TfL revenue line will not grow by a commensurate amount. TfL seems to have lost its marketing mojo since the 1990s, content to ride the huge boom in London subsidies, population and employment. But recent visits to the outer ends of some of the tube lines, or casual observation of the hundreds of lightly loaded buses in central and inner London, highlight the problem of excess capacity at many times and places. TfL’s politically-driven ‘one-size-fits-all’ fares policy, and nervousness about the ‘unfairness’ of locally-targeted promotions, make it hard to respond tactically to filling empty seats.

It is also striking that for many station-pairs within central London, the Elizabeth Line time savings are surprisingly small – often +_ 2 or 3 minutes. There are exceptions – Farringdon <> Tottenham Court Road for example, and this partly reflects the indirect route through central London, and the typical TfL “all stations” journey pattern on longer journeys.

It is undoubtedly true that the overall journey experience on the Liz Line is far more pleasant than the tube in central London, and avoids awkward changes (I for one will not miss having to use the Central Line at Bank for journeys towards west London).

It is clearly the case that for through journeys from places like Abbey Wood, and ultimately metropolitan Essex, to and from the “west of the centre” (eg Paddington) The Liz will be far quicker. But who actually makes such journeys ?  Probably very few – and it will take time for people to reorganise their habits to take advantage of the new links.

Work trip frequency has already dropped, peak spreading is well underway, and now many high-end London financial and services jobs are slowly migrating to “digital nomads”, who can enjoy a higher standard of living in Warsaw or rural France compared to Hackney, Dagenham or Eastbourne. For the less globally mobile, they can now simply stay in Berkshire, and pop into the London office two or three times a week when needed, and probably travel at off peak times.

The entire project was predicated on massive central London employment growth and the resultant pressure on peak period travel – something that may now never happen.  Instead, passengers will rearrange their journeys, and the Central Line in particular will avoid the worst overcrowding. Most of the Elizabeth Line passengers will have simply diverted from the Central Line, Great Eastern, Great Western, and other local tube and suburban rail services which have been replaced or relieved by it. Indeed, it was journey time savings (not revenue growth) that constituted the bulk of the ‘benefits’ used to justify the project.

Some comfort will arise from the staggering, and under-reported, post Brexit increase in immigration figures, which has leapt from c300k pa to around a million. It is safe to assume that much of this will be directed towards Greater London and guarantees the medium-term success of the vast apartment blocks under construction along the line of route.

The financial problem for TfL, and therefore HM Treasury, is that the Elizabeth Line needs to be quite crowded, quite soon, to stand any chance of generating an incremental cash surplus.

We have, of course, been here before. The creation of the modern Central Line in the early 1950s, and similar improvements to local rail services in places like Merseyside, Greater Glasgow and Tyne & Wear in the 1970s and 1980s were expected to generate huge leaps in rail traffic. In all cases there was some growth – but usually less than expected – and the projects became political successes, but required never-ending revenue support and periodic capital binges to replace life-expired track, signalling, stations and trains.

Neither is it clear that the provincial projects ever really made a large, measurable contribution to urban regeneration – although there is remarkable cross-party political consensus that such projects are A Good Thing – especially when central government pays for them.

My prediction is therefore that TfL will declare a new financial crisis within 9-24 months – when the revenue and cost implications of Crossrail to the overall TfL subsidy line become clear.

TfL already has a ready-made excuse in the form of Covid, and Sadiq Kahn will also blame “heartless Tory cuts” for all and any problems. This will probably get them a long way with voters and the media, but it is easy to imagine that further drastic reductions in TfL’s politically-unloved bus network, and even some local rail services will be needed.

It is a strange fact of economic life that Boris Johnson is perceived by a mostly-hostile press corps as a ruthless Thatcherite, whereas a better criticism is that he is a Heathite “wet”, shorn of the Europhilia, who spends taxpayers’ money with an abandon that even Jeremy Corbyn, after a drunken night in Havana’s Club Marxista , might find alarming. It is Johnson’s leftish economic policies that now place him in mortal danger with Tory MPs and members, rather more than questions of when and where he may have eaten a cake.

There must now be a strong risk that any post-Johnson Tory government – under greater pressure to control public spending, to reduce taxes – removes TfL from mayoral control in fact, if not in theory. We are slowly moving to this point anyway, with TfL already on a kind of quarterly spending ration-book. The existence of the Mayor allows central government to deflect some blame for service reductions, but also makes the kind of fundamental reform necessary to reduce TfL’s overheads or operating inefficiency even more difficult. Ultimately this may not be a sustainable position, and a future government may conclude – as they did in 1984 – that if they are paying all the bills, they must also have greater day-to-day and strategic control.

The real crunch will come in 2024/25 when a new incoming national government – perhaps a Labour-led ‘progressive’ coalition theoretically committed to additional public spending – has to confront the reality of an economic situation characterised by high government debt, unceasing demands for more spending on the NHS and social care, high inflation, and high borrowing costs. As in 1976/77, that’s when the real pain could come.

Hold tight, the next stop is HM Treasury, where this train will be terminating.

David Leeder is Managing Partner of economic and strategy consultancy TIL Transport Investment Limited, and was previously a director of National Express Group, FirstGroup and CEO of West Midlands Travel.

32 thoughts on “The next TfL financial crunch will be wrapped in a purple ribbon, and labelled “Crossrail”.”