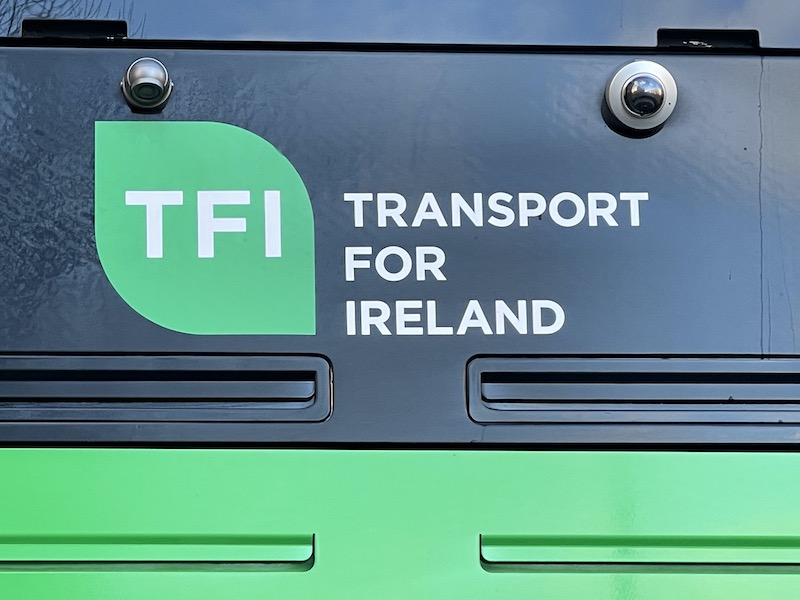 I’ve been visiting friends in Dublin over a weekend in early March for many years and after missing out in 2021 due to Covid was back on the Emerald Isle once again on Saturday and Sunday.

It’s a great city to visit and I always look forward to my annual trip but after many years visiting I’ve yet to fathom out the city’s bus network and really explore the city by bus. I find it virtually impenetrable to use.

No bus map (Mike Harris, Dublin needs you), an unfriendly website – both Transport For Ireland and Dublin Bus – and a seemingly complex network and fares proposition defeats me every time.

Transport For Ireland does have diagrammatic bus maps for some towns including Cork, Galway, Limerick and Waterford as well as others, but nothing for Dublin.

However two most notable things I noticed this time a couple of years on from my last visit were Dublin Bus have ceased running their airport express routes 747 and 757 to and from the city centre ….

…. and a bright new livery is being rolled out across not only the city network but across the whole of Ireland under the Transport for Ireland (TFI) brand. It was also noticeable there’s been some serious investment in new double deck buses, including tri-axles.

I wrote about the airport to city centre service after my last visit in March 2020 just before Covid struck noting how National Express had just launched a new Dublin Express competitive venture against incumbents Dublin Bus and First Bus’s Aircoach.

After the three airport services were suspended during lockdown it seems Dublin Bus decided to quit the market permanently rather than return and have left it to Aircoach and Dublin Express to fight it out.

Dublin Bus continue to operate two stopping bus routes which link the airport with the city centre – routes 16 and 41 – but they take longer than the express coaches – around 30 minutes instead of 20 minutes, so not too bad.

I caught an Aircoach on Saturday from the airport which was already well loaded when it arrived five minutes late at the Terminal 2 departure point having already picked many up at Terminal 1. We left pretty much full up.

A coach heading for Cork (route 704X) had left just before with just one on board and it seemed odd he didn’t pick up those of us waiting for the city centre (route 700) as the destination blind showed it was operating via the city centre.

A similar thing happened on my return to the airport from the city centre on Sunday afternoon. An Aircoach on route 705X was sitting waiting at the stop at Westmoreland Street showing a destination of Belfast via Dublin Airport but none of us waiting to board for the airport were allowed on, instead having to wait for the 700.

Meanwhile many passengers crammed on to a busy Dublin Bus route 16 which pulled in behind.

A 700 finally arrived ten minutes late – and it wasn’t reassuring that the Coach Tracking facility on the Aircoach website wasn’t working (luckily I was in a Wi-Fi hotspot) – and the driver soon made her presence felt as she got everyone on board efficiently.

At the next stop in O’Connell Street we only had four seats available and two of those were guaranteed for the two passengers who’d booked online and so guaranteed their places. We left about ten behind as we headed off fifteen minutes late.

But incongruously the empty coach for Belfast via the Airport pulled away in front of us, as you can see in the above photograph with no one on board. We followed it all the way to the airport. Very perplexing.

And how stressful for airport bound passengers with flights to catch.

Not very reassuring if you’ve just been left behind by a coach that’s full up.

When we arrived at the airport I asked Lisa, our brilliant driver – she came with real personality – what the logic of all that was and she explained it’s to do with licensing – the Belfast (and Cork) journeys aren’t licensed to carry passengers between the city and the airport even though they operate between the two so passengers are left behind. Twitter commentators observed there are licensing issues with the 705X as it’s an ‘international service’ crossing the border to Northern Ireland. But this doesn’t explain why the Cork bus wouldn’t take passengers from the airport to the city centre. It smacks of bureaucratic regulation to me.

Except it’s not completely regulated as when I got to the airport I wandered over to Terminal 1 and found lots of activity to promote NatEx’s Dublin Express as the ‘go to’ alternative to First Bus’s Aircoach with competitive matched fares and a similar half hour frequency.

Except for different city centre pick up and drop off points, the two services are very similar.

But where are Dublin Bus? On the strength of my experience over the weekend there’s huge scope to increase frequencies for the demand – we’re not even in the summer season and there’s overloading.

It’s two routes to the airport – 16 and 41 – seemed busy. And certainly the latter had extra luggage racking fitted.

Back to my failed attempts at exploring the city by Dublin Bus and, now they’re a thing in Dublin, Go-Ahead Ireland.

Having arrived in the city centre there’s nowhere you can obtain useful information about the bus network. No wonder tourists gravitate towards the various sightseeing operators (BigBus and Dublin Bus both operate) as they’re offering is very visible and simple to grasp.

On a previous visit I enjoyed a CitySightseeing tour – it’s a great way to see the city with a wonderful typical Irish live commentary – although CitySightseeing seem to have exited the market.

On another previous visit I explored the tram network as that’s always easy to work out where it goes – at least you get a diagrammatic map – and the nine segment articulated trams are well worth experiencing if only for their leeeeength.

I did manage to find some Go-Ahead buses on a previous visit at the end of a tram line which was fun.

Some years ago I arrived in the city centre early enough on a Saturday morning to find the Dublin Bus travel shop on O’Connell Street open but it’s been reduced to weekday office hours for some time now so pretty useless for weekend tourists.

In any event the availability of printed timetables looked rather primitive through the glass and without a map not very helpful.

And if they’re anything like Dublin’s tradition of posting bus stop timetable departures from the terminal point at every stop (and on line) it just adds to the complexity and mental strain of working out travel plans.

To work out the departure times from the bus stop you’re waiting at you have to be proficient at arithmetic and add up the journey times shown at the bottom between each timing point and add it to the terminal departure time. How unfriendly is that?

I see from the TFI website, and also my own reading in the trade press, Transport For Ireland are undertaking a systematic review of the whole bus network segment by segment under the project title “BusConnects Network Redesign”. There’s even a special website dedicated to the project. It also extends Ireland wide, and isn’t just restricted to Dublin.

The second area involving four ‘C Spine’ routes in West Dublin and East Kildare was introduced last November with some explanatory maps and information about the new spine and local feeder route networks online which is a step forward.

And after a bit of clicking around on the BusConnects website after I returned home on Sunday evening I actually found a full network bus map.

Next blog, Thursday 10th March 2022, and a late change to the -enviously advertised subject: A new chapter for Stagecoach.

23 thoughts on “Impenetrable buses in Dublin”