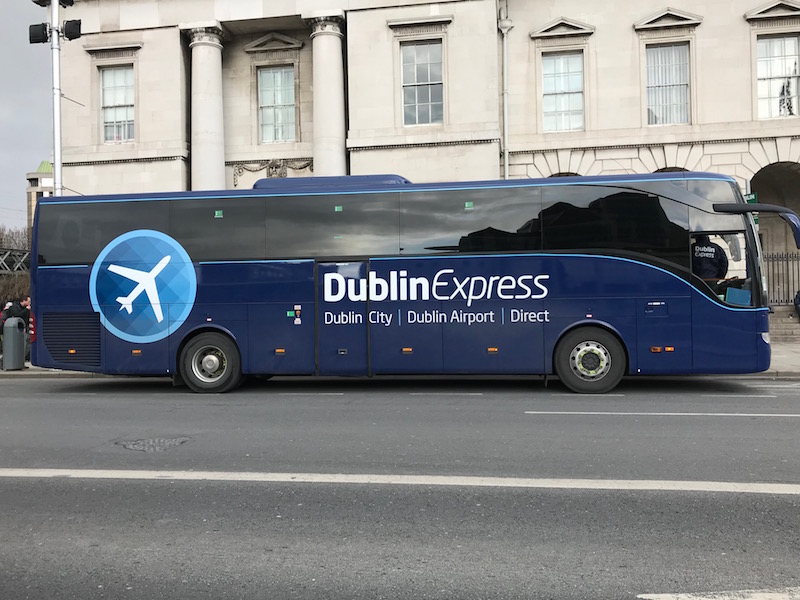 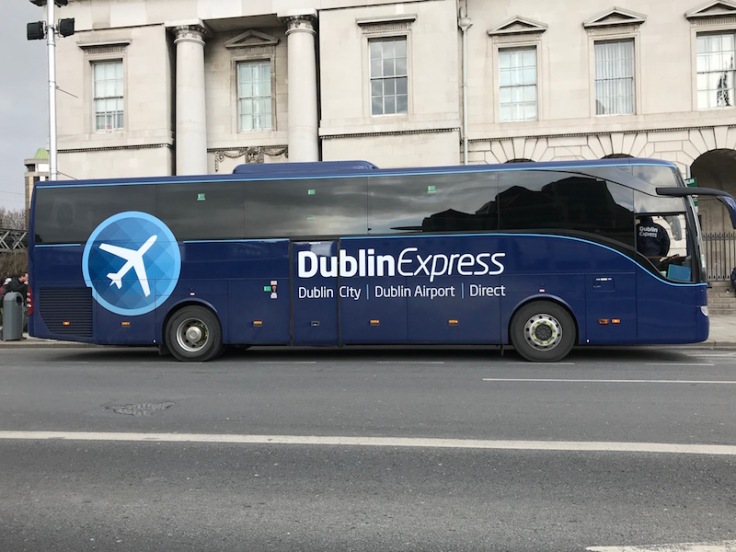 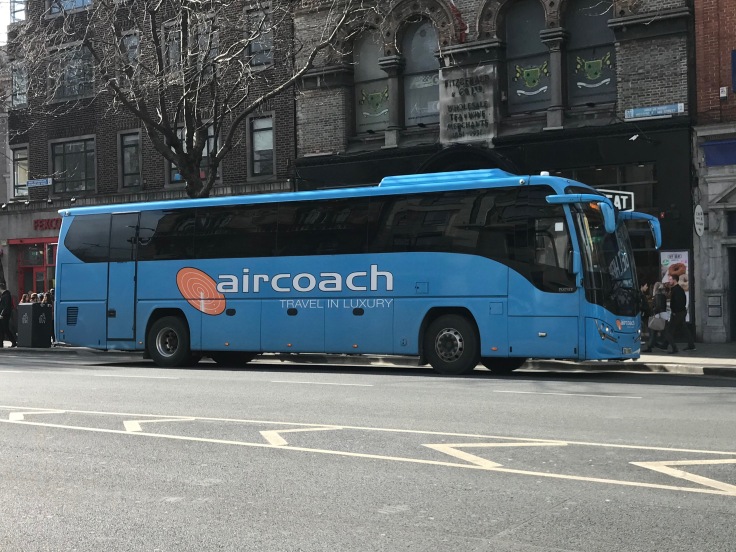 Inevitable the new competitor has led to a bit of a price war with both online and pay as you board fares getting keener. 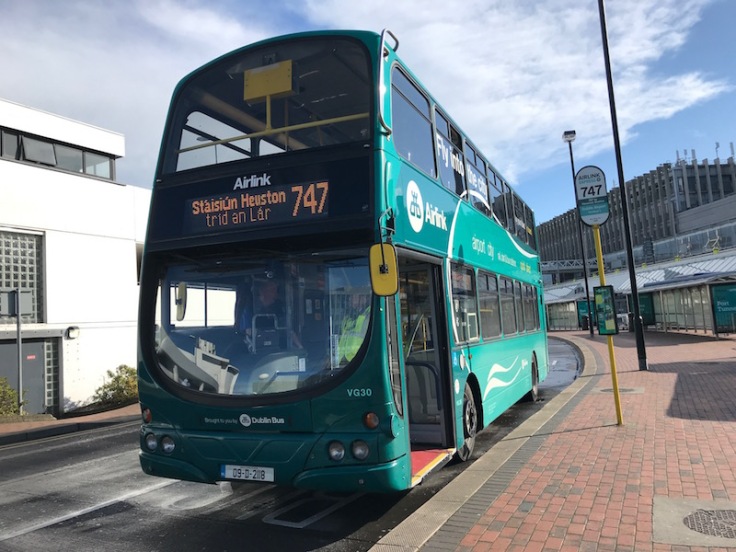 Dublin Bus operate two Airlink branded routes 747 and 757 linking different parts of the city centre including O’Connell Street and the Central bus (coach) station as well as both Connolly and Heuston Stations. 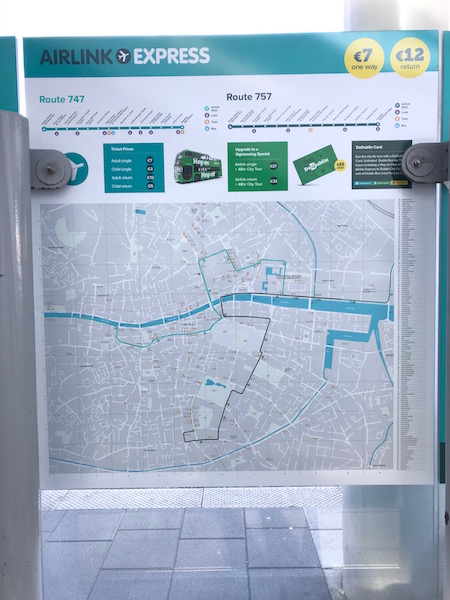 Airlink also uses the slightly faster route into the city via the toll Port Tunnel as does the new Dublin Express, whereas Aircoach uses the traditional route avoiding the toll; but the end to end journey times are not hugely different. 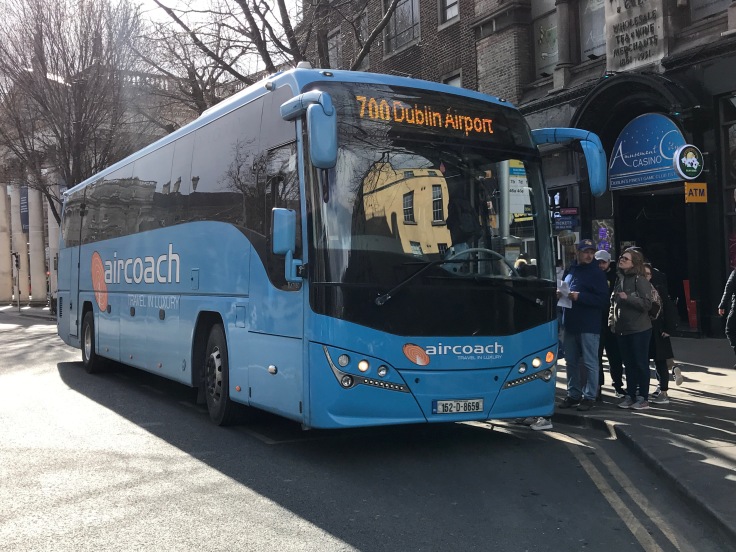 Aircoach also serve conveniently located city centre bus stops on their route 700 but Dublin Express has three bus stops none of which are quite so central as O’Connell Street – Custom House being the closest and fairly close to the coach station and Connolly Station. Strangely they’re numbering these with three different route numbers (each on an hourly frequency) depending on which stops are served. 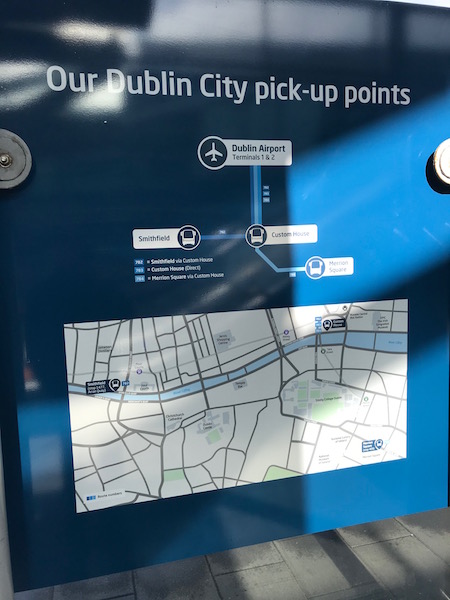 Custom House is served every 20 minutes by all three routes, 782, 783 and 784 with the 782 continuing west to serve Smithfield and the 784 south to Merrion Square. Impressively this pattern continues right through the night as a continuous 24 hour operation. It means the new entrant offers the best night time service. 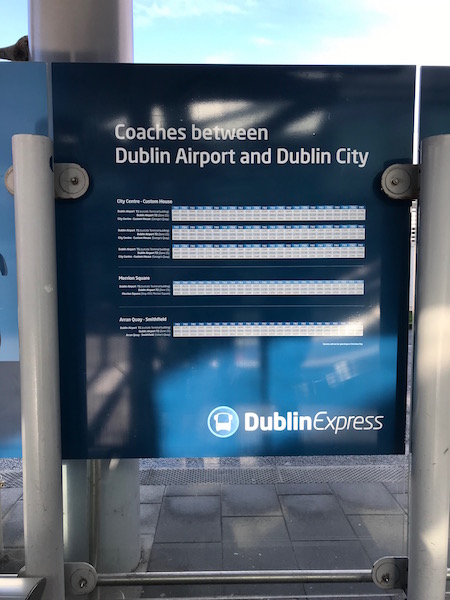 Aircoach route 700 also runs 24 hours around the clock with a fifteen minute frequency except between 00:00 and 04:30 when it drops to half hourly. 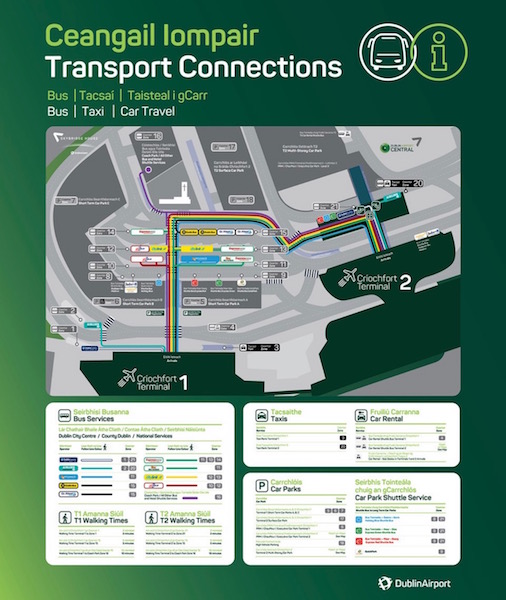 Interestingly there’s been a revision to the all important picking up points outside the Terminal buildings at Dublin Airport. 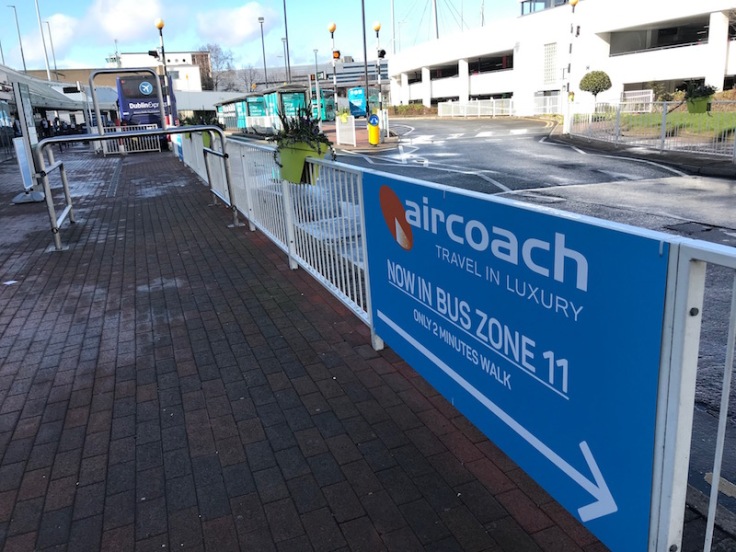 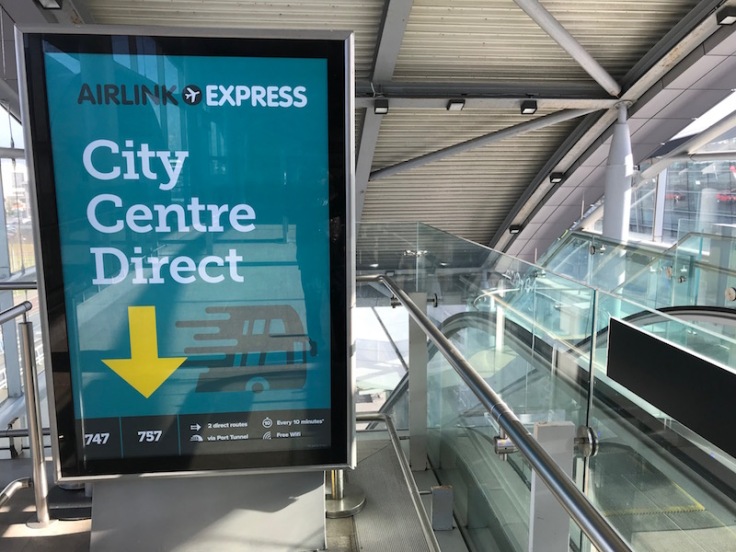 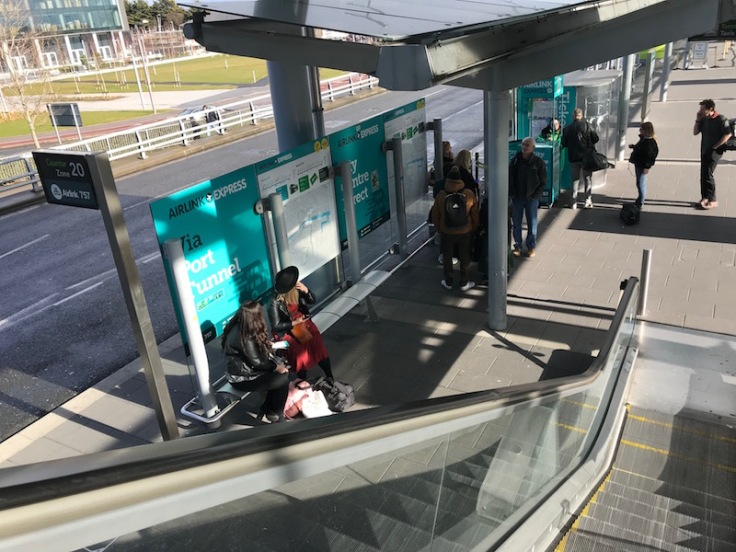 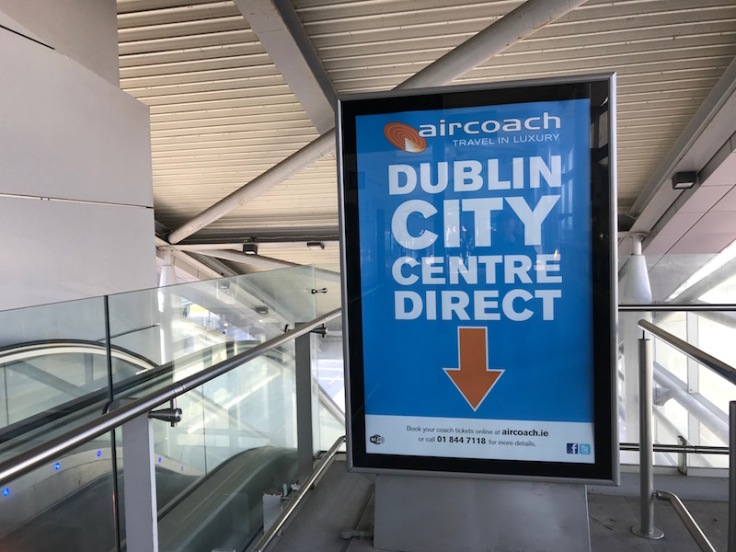 … and is now on the walking route to the new pick up point further on. 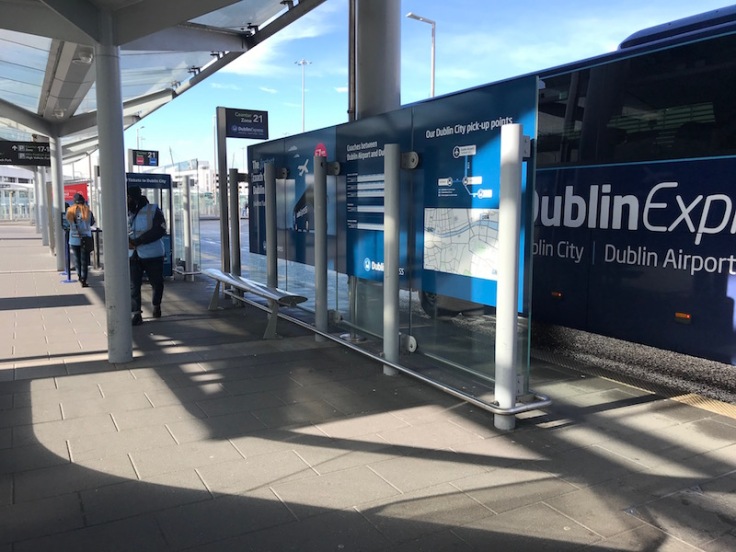 …. with a revised pick up point in the main coach station area sited in between the two Terminal buildings for Aircoach. 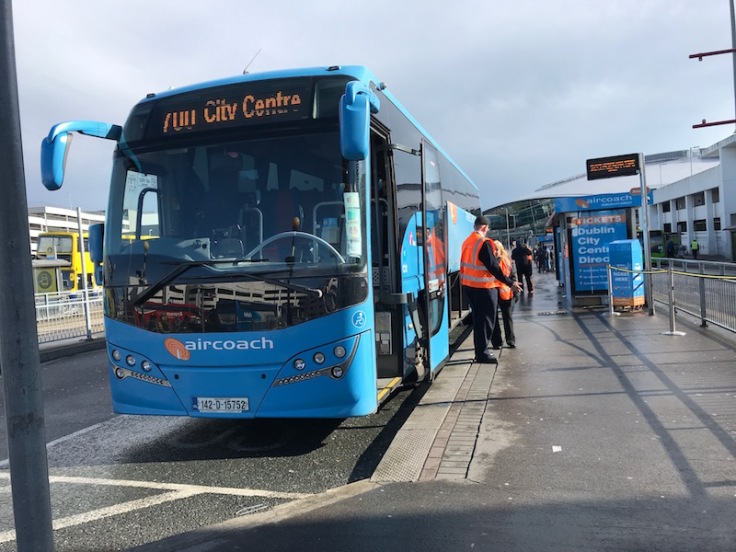 …but the disadvantage is every potential passenger for Aircoach now has a slightly longer walk to the pick up point no matter which Terminal building they arrive at. Perhaps the departure charges are cheaper for them? (Update: see Ronan’s comment below for further background information explaining this change.) 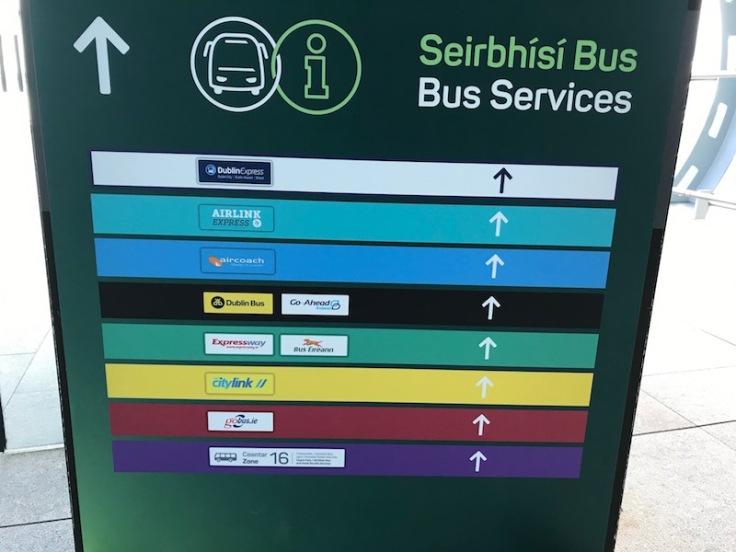 I arrived at Terminal 2 yesterday and had pre-booked online with Aircoach and found myself walking past the Dublin Express pick up point and onward along what seems like a much longer walk to the coach station than it really is – it’s only just over two minutes and you can see it from the overbridge- but when you’ve already walked a long way along corridors and escalators from the aircraft it can seem psychologically a distance too far. 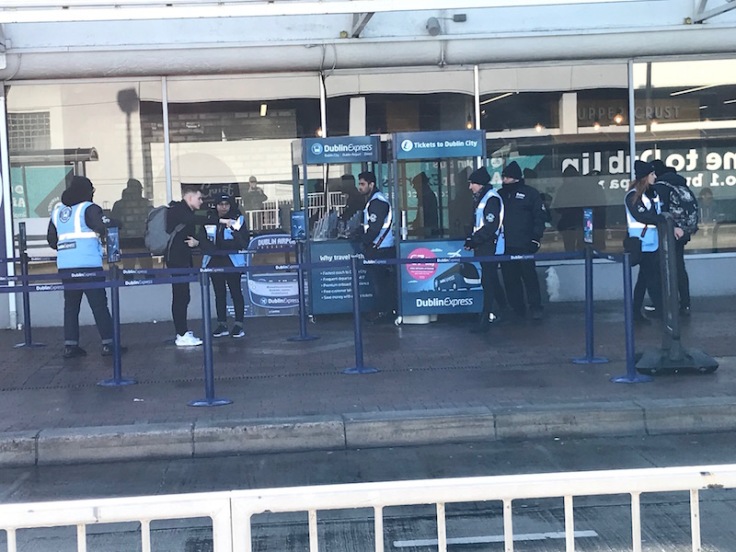 I was amazed to see how many ambassador type staff Dublin Express are deploying at both Terminal pick up points. It may be a temporary arrangement to raise awareness and be slimmed down in the future but in the meantime both Aircoach and Airlink are also deploying staff and high profile pay points. 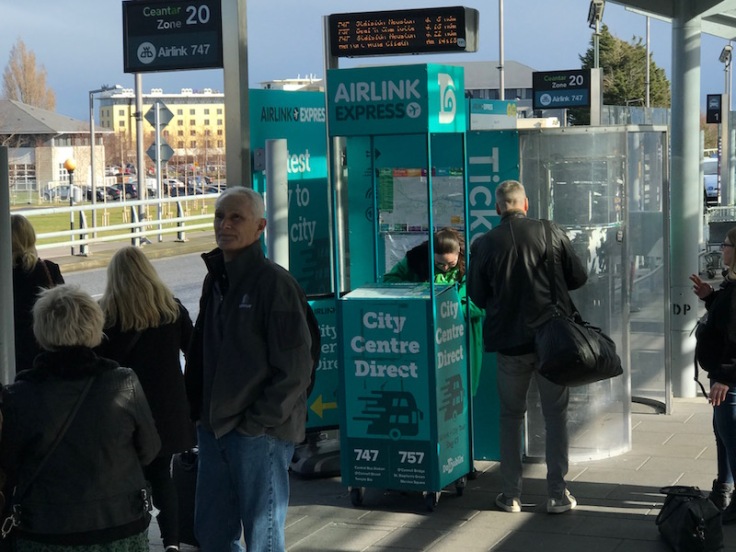 Dublin Express even had a member of staff at Custom House this afternoon helping with luggage loading although he told me he was a ‘temporary human bus stop’ as the bus stop pole had recently been knocked down! 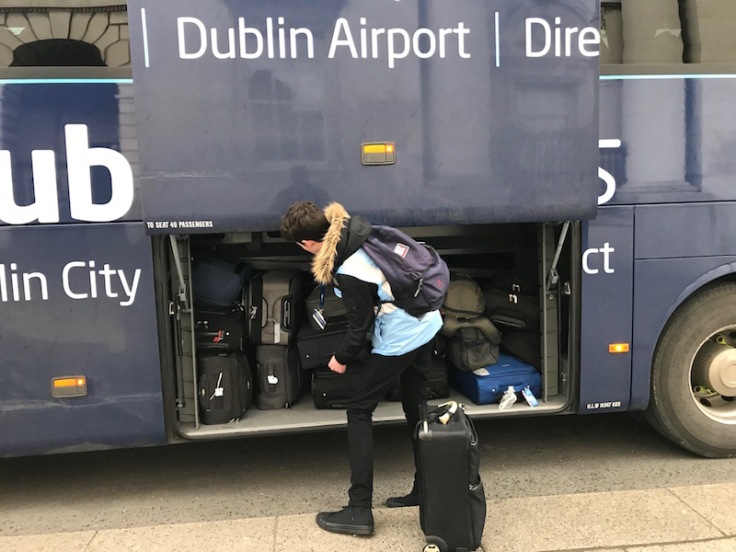 Dublin Bus have the advantage of linking their Airlink service with their city sightseeing options as a package deal and have a significant presence in Terminal 1 as well as at their departure point outside. 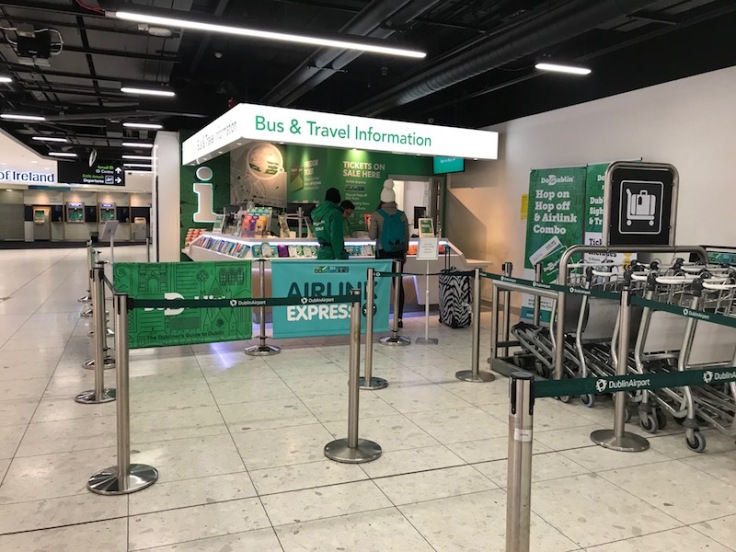 However their vehicle offering is much more traditional bus company style with old style bus seats in a double decker .. 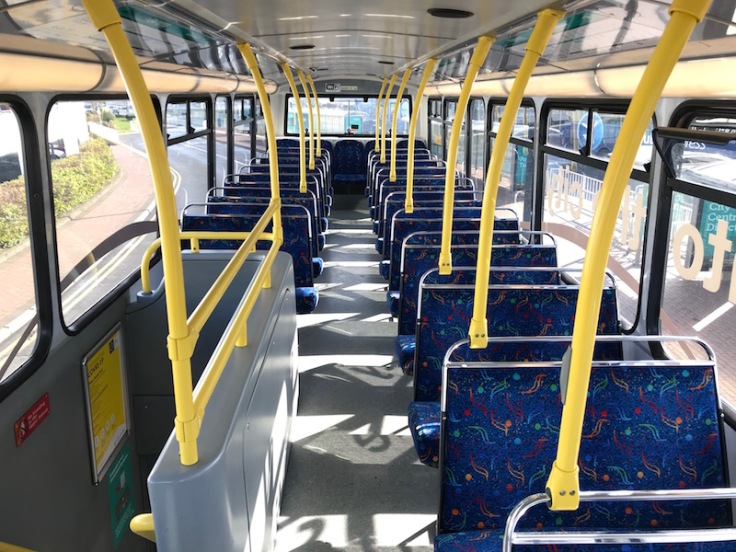 …. although the lower deck gives the option of easy to access luggage racks (rather than underfloor side lockers on a high floor coach with Aircoach and Dublin Express) and of course Airlink is fully accessible for wheelchair users. However they also persist with using their incomprehensible bus stop timetable displays showing terminal departures and leaving you to do the maths to work out the actual departure time from any pick up point along the route. Very strange. 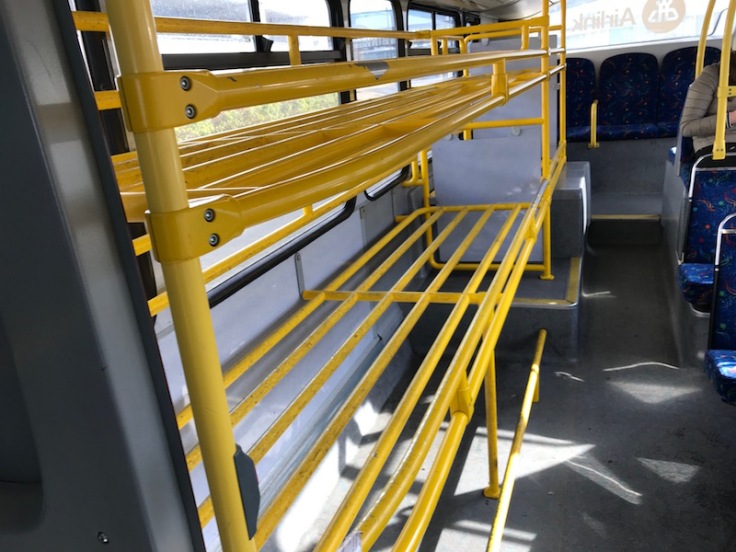 The coach seats in First Bus owned Aircoach looked uncannily similar to the Stagecoach interior colour scheme in their latest buses. Just a coincidence I know. 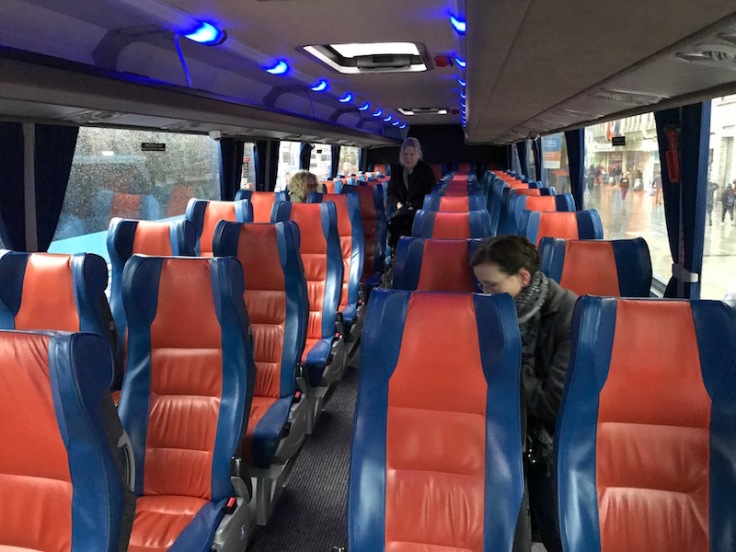 So you pay your money and take your choice on these three city/airport options.

And on the paying your money front you can buy tickets from drivers with cash or contactless with Aircoach but only cards (not cash) with Dublin Express and only cash (not cards) with Airlink …. if those ambassadors haven’t got to you first (who take cards) – or online of course.

Single fares are €7 with Airlink currently knocking €1 off online to match the Dublin Express €6 fare. Dublin Express are currently offering a return for the price of a single as an introductory offer during March (nicely called a ‘free return upgrade’) *… 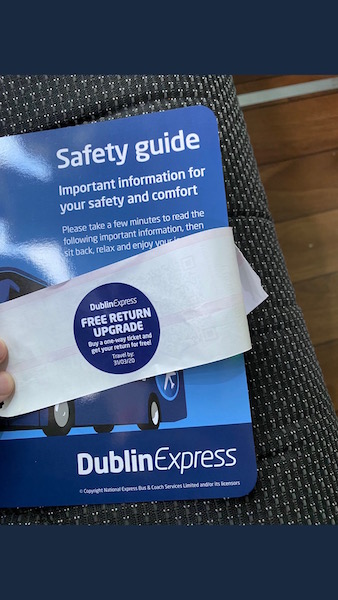 …. with Aircoach offering a bargain €8 return online and Airlink €11 return online (€12 cash/card at pick up points). So it’s quite competitive with the new entrant just having the edge … for now. 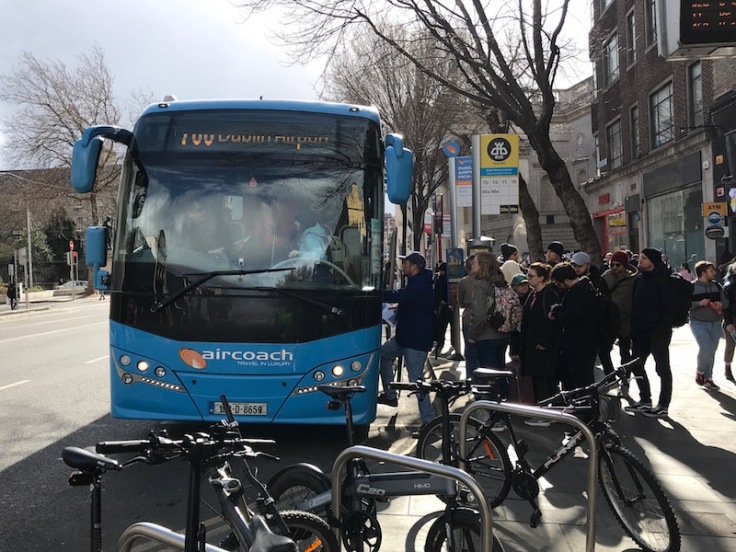 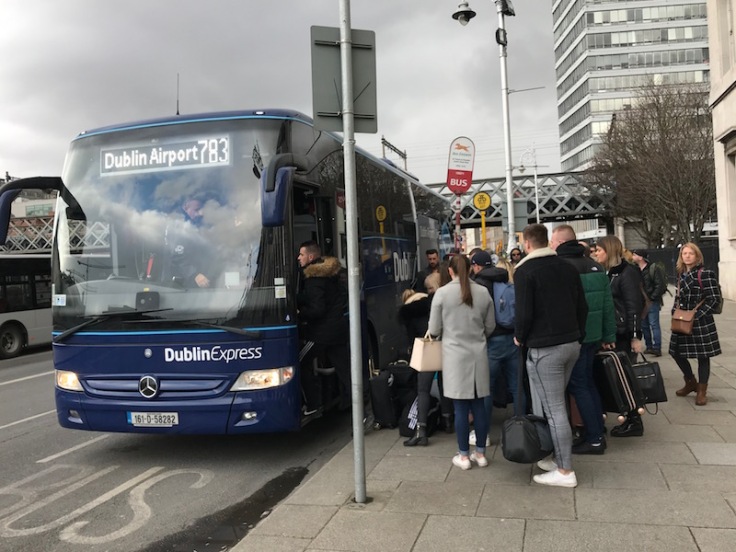 … including a very impressive busy departure for Dublin Express bearing in mind it’s only its first week …. 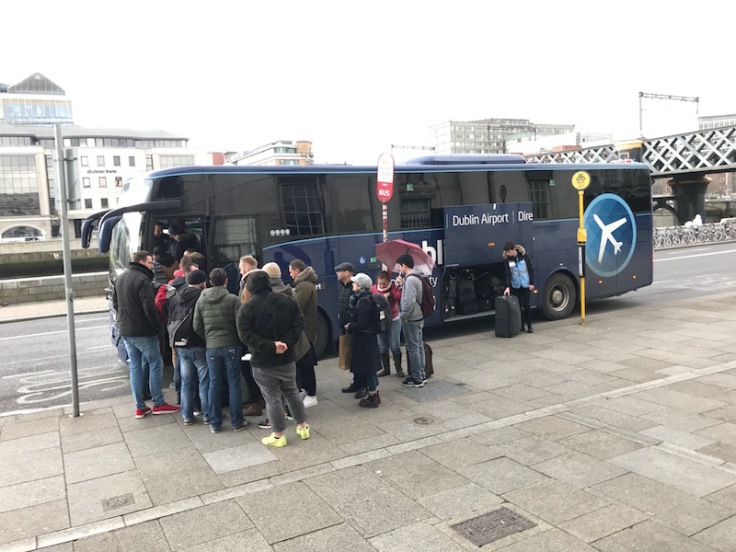 … but I also saw some very lightly loaded journeys which is probably the nature of frequent airport services very much peaks and troughs.

National Express state they have plans to expand the Dublin Express service and I’d expect to see an increase in frequency and more city centre stops added but perhaps a reduction in those ambassadorial staff in the coming months. 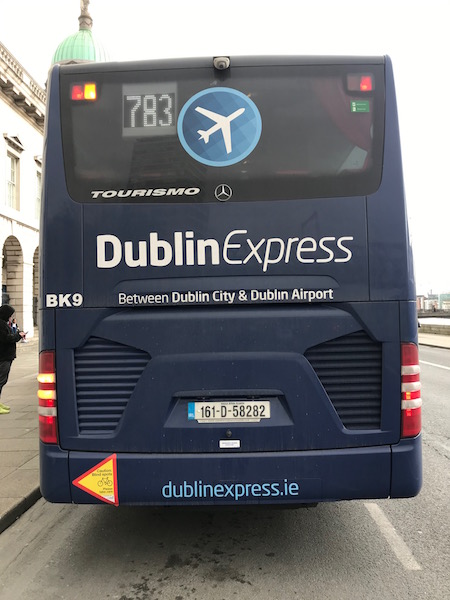