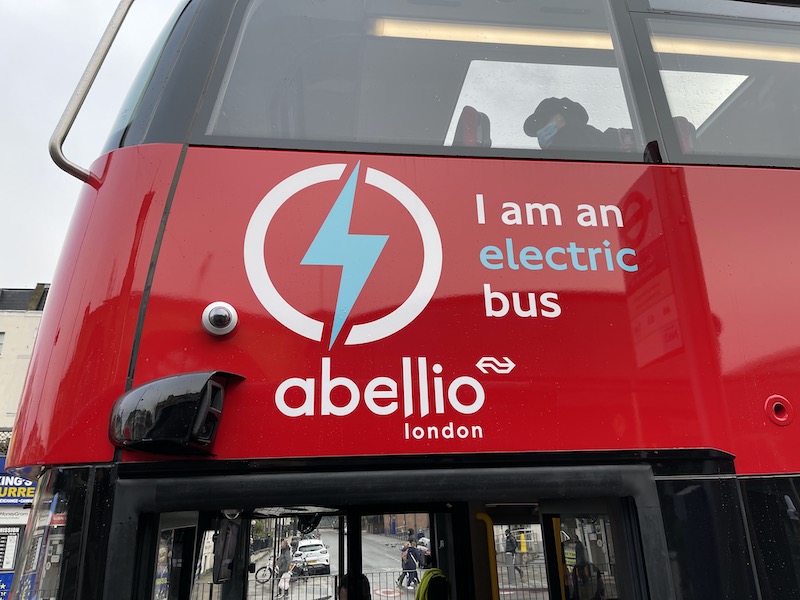 It’s nice to see London’s regulated buses at long last catching up with standards of comfort, decor and facilities that have been commonplace on new buses in the deregulated rest of the country for many years.

Yet, this being London, it’s not just a straightforward upgrade to bus specifications. Bish bosh done, provincial style. This is just an “initial trial for evaluation” as part of a wider project called “Future Bus”.

According to a report to TfL’s Programmes and Investment committee in July 2021 (the) “‘Future Bus’ project is a set of measures to improve bus passenger experience ….. including provision of additional bus shelters and improved real-time information. The initial year of this project will trial different interventions on a specific bus route to promote the return of bus passengers to the network following the coronavirus pandemic, as well as helping arrest the long-term decline in bus patronage that was occurring prior to the pandemic. Subject to the evaluation of this initial year, this is anticipated to lead to further passenger-facing enhancements in future years”.

This meeting noted a forecast £16 million cost for the five year project with an immediate approval for £5 million while back in October 2018 a contract worth up to £7.25 million was awarded to Trapeze Group “to deliver the first project of TFL’s Future Bus System programme for a new technology solution that manages the capital’s bus routes and schedule data, enabling efficient management of disruption and service changes, and providing an online portal for managing communication with bus operators”.

It seems “Future Bus” is about techie software as well as bus hardware as this excited Trapeze press release went on to explained back in 2018: “Trapeze’s Novus system, a proven bus schedule data management solution that already supports many Combined Authorities and Local Authorities across the UK has been chosen“. Speaking at an event to formally launch the Future Bus Systems project, Tim Porter,Trapeze Group’s CEO in the UK, commented: “We are proud to have won this contract to support London’s iconic bus network, and are excited to have the opportunity to further improve delivery of services for the travelling public of London”.

Aside from higher spec buses, enhancements to bus shelters and real time information systems with new technology solutions to manage schedule data and efficient management of disruption and service changes, what has “Future Bus” got in store for us, the Roman’s might well have asked.

As recently as October 2021 a written Mayoral answer to Caroline Pidgeon, chair of the London Assembly’s Transport Committee stated “‘Future Bus’ is the internal working name for a broad range of potential enhancements to the bus network, aimed at making it more appealing to existing and potential passengers. Transport for London anticipates publishing details by March next year”. But why wait until March, when route 63 is already showing us the way?

The “specific bus route” chosen to “promote the return of bus passengers” is indeed TfL’s route 63 running between Honor Oak and King’s Cross. It changed hands from Go-Ahead London to Abellio in November with the new tender including the introduction of 29 BYD Alexander Dennis City EV bodied battery-electric powered double deckers to a higher internal specification, not previously experienced by Londoners.

The buses are to a refreshingly higher standard than Londoner’s usually experience. Sure passengers in the Capital have been enjoying greener propulsion over the last few years which is all good stuff for the environment, but as many bus companies outside of London have found, what matters even more to passengers is having a great environment inside the bus including comfortable seats, enticing decor and gizmos like usb sockets.

Abellio are so far only managing to get a trickle of these new buses out onto the 26 peak vehicle requirement route 63 each day but I managed to track a couple down just before Christmas and another one on Tuesday to take a ride and see for myself what the “Future Bus” specification includes.

The driver I travelled with on Tuesday was positively ecstatic about the new bus he was driving. He must have seen me taking photographs on the upper deck via the cctv monitor and when stuck in a long queue at a set of traffic lights left his cab to pop upstairs to eulogise how wonderful they were.

He even invited me to take some photographs of the cab area which he was so delighted with.

Here are twelve other much welcome enhancements I spotted as a passenger …..

1. The first thing that strikes you as the bus approaches is the destination blind. A nice clear electronic LED affair making for easy route recognition in both daylight, dark evenings and early mornings.

It’s a revolutionary development for London and I’m sure will impress passengers as it has done everywhere else in the country on modern buses for many years.

3. Thirdly you’ll notice two pairs of clearly marked ‘priority’ seats on the nearside opposite the staircase using a different coloured moquette to make them stand out, even including a different head rest cover colouring. A smart move.

Although the leg room in the front pair is a little restricted due to the front nearside wheel.

4. Fourthly, the rest of the seats are in Abellio’s rather smart red with a contrasting black/dark grey head rest which certainly brightens up the bus.

Compare and contrast with the non head rest old guard ….

5. It’s nice to see five seats haven’t been squeezed into the back row on both decks and instead there’s a gap with a yellow hand rail. It’s a shame there’s no rear window on the lower deck due to all the rear electric ‘gubbins’ but ….

6. … the upper deck large window above the rear seat is also great for seeing what’s coming up behind. And a nice deep sized parcel shelf too.

7. Another innovation rolled out in the provinces a few years ago is the provision of usb charge sockets, smartphone holder and a stop button (on the gangway seat) in seat backs….

… although downstairs the bell push is on the stanchions (which don’t exist on the upper deck) making for a less cluttered feel.

8. The seats are very comfortable to sit in and leg room is generally very good….

… although one or two protrusions under some seats get in the way.

And although the pair squeezed in between the driver’s cab and stairs have the bonus of a window to look out of – which isn’t always the case – they’re a bit upright and almost lean forward.

9. Interior multi-coloured next stop displays on the lower and upper decks are very clear and bright.

They even count down the time to the next main stopping point which is useful.

10. The staircase is to TfL’s straight standard layout and has been enhanced with extra lighting acting as an invitation to come upstairs.

11. The wheelchair areas is prominently marked out and the absence of a buggy symbol is pertinent.

It’s also good to see a usb socket positioned for anyone sitting in a wheelchair backed up against the ironing board.

12. And finally on the upper deck you can gaze up at the sights as you travel through London courtesy of the glazed roof panel ….

… that’s if you’re sitting in seats towards the front as there’s just the one.

So that’s all the good news, what about any shortcomings?

Just a few, particularly the layout at the rear of the lower deck – a common problem on double decks with a lot of electrical propulsion stuff housed at the very back.

The two step arrangement to the seats at the back means there are only six seats on the lower deck with level access – not very helpful for those needing such a facility.

Even more annoying is the arrangement over the rear wheel arch, where in the rear most seats your feet are raised up over the sloping arch.

Those rear seats aren’t very comfortable at all with more straightened seat backs too.

There are only 23 seats in total on the lower deck – pretty much a minibus capacity – and even then the pair in the very front nearside position, although offering a superb view of the road ahead, are a bit of a squeeze for two and I suspect in most cases will only be used by one passenger at a time.

Something else missing from the lower deck is a repeat next stop display facing the wheelchair bay – something the best bus companies outside of London now incorporate as standard not least for equality reasons, so I’m surprised that’s been missed out by TfL who are usually hot on these things.

I also noticed the strap hangers over the wheelchair area rather obscure the next stop display for everyone sitting on the lower deck rear except those in the offside seats next to the window in the first couple of rows beyond the centre doors.

Although the seats are comfortable it’s a shame the specification didn’t go a little further and replicate the best to be found outside of London. Why not a few tables too? If TfL are serious about wanting “to promote the return of passengers” I suspect it’s going to need more of a ‘wow factor’ than the new look route 63 buses are offering. It strikes me they could have usefully involved the country’s leading bus and train design agency to create the ‘best impression’ for London’s passengers.

There’s also no evidence yet of the enhancements to bus stop infrastructure along the route. On my pre Christmas journey I didn’t see anything but standard TfL shelters. No doubt these will follow as the year progresses.

I appreciate despite that contract award to Trapeze back in 2018 on TfL timescales it’s still very early days for this project. Indeed only a handful of new buses are being allocated to route 63 each day and none ventured out of the garage between Christmas Eve and this week, possibly due to charging infrastructure not yet complete or driver training issues.

I saw a report the buses moved to storage in Wandsworth garage over the Christmas/New Year period so Abellio’s Walworth garage (where route 63 is based) could be used for services operating special schedules last week which seems a funny way to treat brand new expensive buses, ie keep them out of service for a week.

On Tuesday this week five ventured out first thing but three were soon back in the garage again meaning the route was still dominated by older buses during the off peak with the new buses only venturing out again late afternoon. Maybe there are ‘range’ issues?

But at least these new buses are a welcome start to improving the quality of bus travel in London bringing it closer to standards passengers have been enjoying from new buses elsewhere in the country for many years.