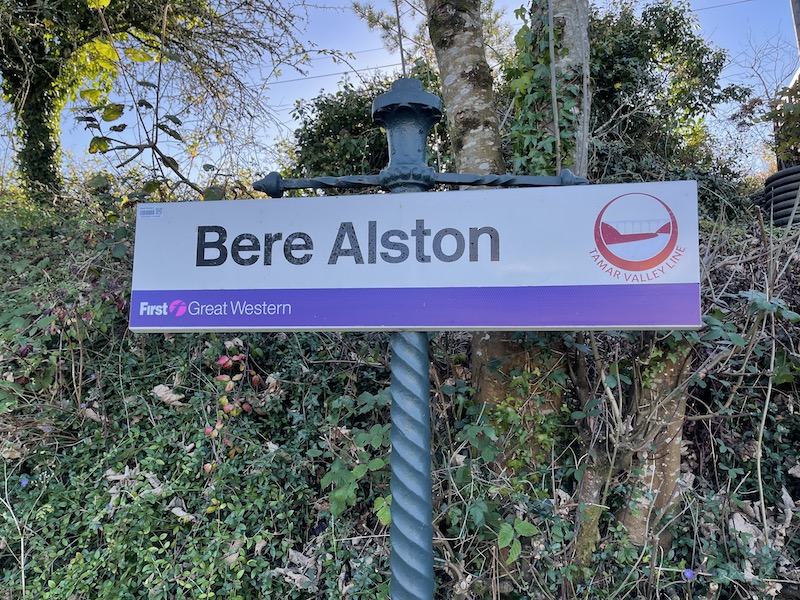 As explained in Wednesday’s blog when the violent storm caused the railway track at Dawlish to collapse in 2014 there was much talk at the highest political level (Prime Minister David Cameron no less) about taking action to ensure the South West wasn’t ever cut off from the rail network again.

One option given serious consideration was the idea of restoring the former London and South Western Railway line via Okehampton, Tavistock and Bere Alston which closed in 1968.

In fact the DfT have recently announced £50,000 funding from its “Restoring your Railway” fund for further work on what’s seen as the next phase after Exeter to Okehampton – reinstating the line between Tavistock and Bere Alston where it meets the existing Tamar Valley Line into Plymouth.

Reopening this section has been talked about for a very long time. It first got a mention in the 2004 Devon Structure Plan as well as the 2011 West Devon Core Strategy.

Reinstating the entire line including between Tavistock and Okehampton is fraught with difficulties not least because key sections of the former track bed near Tavistock have been built over, other sections are now a popular cycleway and long stretches of single track railway wouldn’t make for a practical alternative route if the intensively used twin track line through Dawlish was unavailable.

And that’s before consideration of whether there are sufficient passengers along the route to justify what would be a huge investment making the £40 million bill for reopening the Exeter to Okehampton stretch look like petty cash.

After my early morning train journey to Okehampton on Monday I took a ride round the circuit to Plymouth to get a feel for the likely demand as opposed to the ‘wouldn’t it be nice to have’ approach. Obviously that meant a bus ride or two, in the absence of the railway.

The Dartline bus company in conjunction with Devon County Council commendably increased the timetable of route 118 which runs between Okehampton and Tavistock to coincide with the reopening of the railway last weekend.

The new timetable sees buses provide excellent connections with train arrivals and departures with the route modified to pick up and set down at the bus stop right outside the station.

I was also impressed by a printed bus timetable with information about the connections was available in the timetable leaflet display at Exeter St Davids.

This is an excellent development all the more so as it’s so unusual these days – not that it should be of course.

The leaflet gives the excellent news of a ticket tie up (of sorts) between train and bus in that “a maximum fare of £3.00 single or return is being introduced for passengers on the 118 who have a valid rail ticket”. Great for passengers transferring from train to bus, but not so good for those starting their journey on the bus, but at least it’s a start.

As is the even better news of the introduction of a Sunday and Bank Holiday service from the December timetable change on 12th December including one journey continuing through to Gunnislake making for a reinstatement of the circular journey previously available using the erstwhile route 279. Although as Stevie commented on Wednesday it’s quicker to take Stagecoach’s route 1 from Tavistock to Plymouth so the Gunnislake extension is really just playing timetables.

GWR has also produced another colourful leaflet of their own showing bus and train timetables combined. It really is a much welcome development to see printed leaflets actually promoting bus and train integration.

My Exeter to Plymouth, avoiding Dawlish, journey began on the 08:38 GWR train from Exeter St Davids to Okehampton on Monday morning with 15 passengers and four bicycles on board. Not bad for a first weekday morning after a fifty year absence.

I became a bit concerned whether my connections would quickly fall apart when we came to a halt for seven minutes on our way out of Exeter. It turned out we had to wait for a late running train from Barnstaple to clear the single track south of Crediton. Luckily there’s a 13 minute connection between train and bus in Okehampton.

In the event we made it to Okehampton by 09:23 and the bus was obviously still waiting for its departure at 09:30. Interestingly I also noted the same train arrived late into Okehampton at 09:23 on Tuesday morning too. This doesn’t want to become a habit if passengers are going to be encouraged to make connections.

In fact the bus didn’t leave until nearly 09:35 on Monday and it was good to get out of the cold and on to the bus when the driver eventually pulled forward.

As you can see one other passenger also made the connection from train to bus, having boarded the train in Exeter for a first time ride. He bought a Devon day ticket on the bus for £9.60 which would give him unlimited travel on all Devon’s buses.

Although I was using my concessionary pass I asked the driver about the £3 special ticket deal showing my rail ticket but he explained that arrangement hasn’t been set up yet and he thought it would only apply from 12th December.

We headed down into Okehampton’s town centre and picked up four passengers waiting at the West Street bus stop then it was off to Tavistock via Lydford, passing the second bus on the schedule.

The bus pretty much follows the alignment of the former rail line alongside the A380 and through the village of Lydford itself where we picked up one more passenger. There used to be a station here which closed in 1968, as well as a branch coming in from Launceston which closed in 1966.

It’s a lovely ride skirting the edge of the National Park offering some excellent views, as I’m sure the train used to do.

The bus also passes through the hamlet of North Brentor and then back to the A386 through Mary Tavy before arriving into Tavistock where the old track bed has disappeared under new development.

As already mentioned, Tavistock is connected with Plymouth by Stagecoach’s route 1 running every 15 minutes and taking about an hour for the journey. Any restoration of a train service could never attain such a frequency and the journey time wouldn’t be much less especially if the winding track was reinstated along the original railway course to Bere Alston which follows the meandering River Tavy for part of the way.

I caught the 10:50 departure from Tavistock bus station with two other passengers, one of whom was on board for just a couple of bus stops as we left Tavistock on the A390 towards Gunnislake and the other stayed on a bit longer before alighting at a track to a farmhouse.

With some great views.

Bere Alston station is where the line from Tavistock was joined by the short branch continuing up to Gunnislake which still runs.

The station is a lovely remote rural former junction station with signal box still in place and disused platform.

Trains now forward into the station then reverse back out from the dead head end where the track once continued to Tavistock having arrived from either Gunnislake or Plymouth.

The 11:37 to Plymouth had about a dozen passengers from Gunnislake on board when it arrived and four of us boarded and enjoyed the lovely views across the River Tamar including the Royal Albert Bridge taking the main line into Cornwall as we made our way down to Plymouth.

I arrived into Plymouth at 12:01, 3 hours and 23 minutes after leaving Exeter St Davids. Obviously that time could be improved by a through train on a restored track all the way – maybe around a couple of hours – but would enough people use it?

With Tavistock well served by Stagecoach buses to Plymouth, the small community in Lydford now well served by an improved bus route 118, Bere Alston connected to Tavistock by bus route 87 with a fairly generous frequency for the numbers travelling and to Plymouth by the Tamar Valley Line, I can’t see any justification for restoring this Beeching cut.