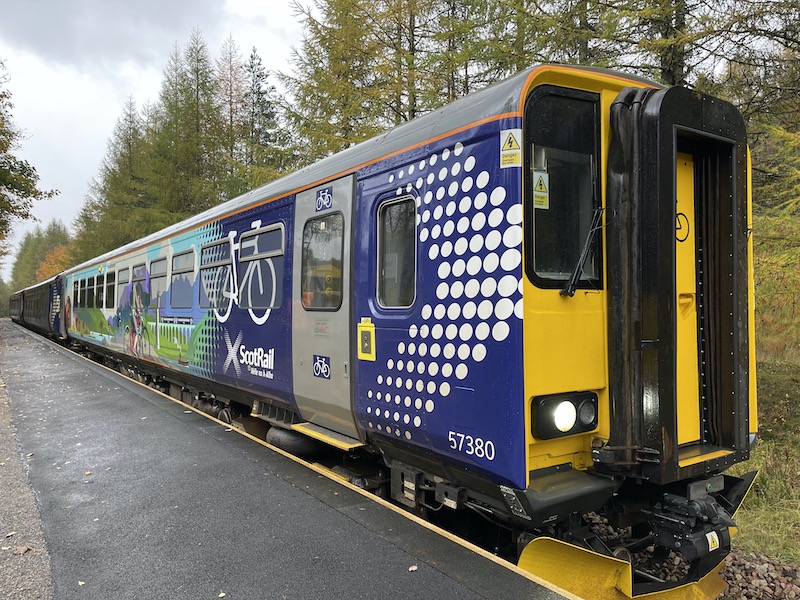 When Abellio was awarded the ScotRail franchise commencing April 2015 I was really pleased to hear their commitment to promoting Scotland’s wonderful scenic rail lines including the introduction of better seats lining up with windows and other innovations including better facilities to encourage cyclists on board with more cycle spaces.

Six and a half years later and with a premature termination of Abellio’s franchise next March in sight I was really pleased to catch up with the first introduction of better seating and cycle provision last Tuesday, it having launched back in July.

Branded the Highland Explorer Abellio have arranged for five Class 153 coaches to be stripped and converted the space to a 50/50 layout shared between better seats and cycle storage.

Two of the coaches with one spare are running on the West Highland Line between Glasgow and Oban being coupled to the usual two-coach Class 156 trains on two return journeys on weekdays and Saturdays and one on Sundays (albeit the latter has been subject to strike action for some months).

The reconfigured coach can’t be added on the Oban journeys that run in formation to Crianlarich attached to four coach trains continuing to Fort William and Mallaig as six coaches is the limit for passenger trains using the line, so it’s only the stand alone Glasgow to Oban return journeys in the scheme at the moment.

There are longer term aspirations to recast the West Highland Line timetable and do away with train splitting at Crianlarich but there’s currently no time frame for this.

Two of the five converted coaches are therefore currently spare and one thought is whether they could usefully be deployed on either (or both) the Kyle of Lochalsh and Far North lines although both options have complications, the latter for example having an upper speed capacity of 90 mph but the Class 153 coaches are restricted to 75 mph.

I caught the 10:34 departure from Glasgow’s wonderfully rebuilt Queen Street station last Tuesday to see how the new arrangements are settling in, three months on from their introduction.

Normally platform numbers are only shown on departure boards at Queen Street ten to fifteen minutes before the off but it was obvious on seeing a three coach train – two Class 156s coupled to a Class 153 on platform 5, when I arrived at 10:00 – that would be my train.

The prominent bright coloured vinyl wrap on the Class 153 was a bit of a giveaway. This striking mural has been designed by Scottish artist Peter McDermott and rest assured the contravision bits covering up the windows are only in the cycle storage section.

I had a wander up the platform to inspect the train and noted the seats don’t exactly line up with the first four windows so eyed up the end table as the best option.

No one else joined me on the platform until the doors were released at about 10:25 and the departure added to the display boards and soon after I’d settled into my chosen seat I was joined by around eight to ten other passengers eager to bag a comfier seat than on offer in the Class 156 coaches.

However within a couple of minutes while cases and bags were still being stowed the train conductor/guard arrived on the scene to remind everyone there’s a £10 supplement charged for travelling in the coach to which I was rather surprised to see everyone pick their bags and cases back up and leave amid various moans and groans.

The way they’d all made a beeline for the coach made me think they were fully aware of its existence and I’d assumed the circumstances to travel in it; ie a supplementary fare. One passenger in particular complained he should have been told sooner as he’d settled into his seat which wasn’t as I’d seen it.

Personally I think it’s fair enough to charge a supplement as the seats are better and you do get a complimentary sandwich, crisps, biscuit, water and unlimited tea or coffee which can cost almost £10 these days. Although the sandwich selection was somewhat limited and not suited to my veggie tastes.

The Highland Explorer coach has five tables for four and two pairs of airline layout seats with moquette designating these are ‘priority seats’ making 24 seats in total.

There are no facilities for wheelchairs but these can be carried in the adjoining class 156 where there’s an accessible toilet; a small cubicle toilet is available in the class 153 coach.

The tables have a rather nice illustrated map of both West Highland Line routes (Oban and Mallaig) showing the popular walking routes as well as sample walking times between stations. A QR code takes you to more information.

The other half of the coach has twenty cycle racks including spaces marked for “small cycles” and “large cycles” where it’s also envisaged large items of luggage and sports equipment can be stored.

No cyclists joined so the train set off from Queen Street spot on time with me in splendid isolation having the whole coach to myself and so it continued all the way to Tyndrum Lower where I completed my journey.

Despite some light rain from time to time the gorgeous scenic views as the train makes its way along the Clyde and then from Helensburgh Upper to Crianlarich were as delightful as ever with Loch Long and Loch Lomond looking all the better for being viewed from a comfier seat!

I reckon in the summer season ScotRail will have a big hit on their hands with all 24 seats regularly taken and £240 extra fares income per journey banked. But to avoid disappointment there needs to be a straightforward easy-to-use forward booking and seat reservation system allowing passengers to choose their seat.

I found the current arrangements rather confusing as to whether you can pre book or not. I’m still puzzled. I paid the conductor/guard on the train who told me you can’t prebook.

One very important requirement is for a large poster on the panel as you enter the coach pointing out there is a £10 supplement payable so it’s quite clear what the arrangement is.

We maintained good timekeeping on Tuesday as far as Ardlui but between there and Crianlarich there was a severe speed restriction in place because of the danger of a landslip in the recent wet weather. This made us late into and leaving Crianlarich by about nine minutes which doesn’t sound too bad a delay, but the problem on a single track railway with few passing places is that such delays and continuing speed restrictions have a cumulative detrimental knock on effect in timekeeping.

And so it proved; my train back from Tyndrum Lower at 13:20 was similarly delayed by around ten minutes having had to wait for the Oban bound train to clear the track at Dalmally and then for an unknown reason we spent about 15 minutes waiting outside Crianlarich before we could join and become attached to the train that had arrived from Mallaig at 13:27. We had been due away from Crianlarich at 13:37 but didn’t do so until 14:01 then losing more time as we crawled through the speed restriction to Ardlui making us about 40 minutes late from there. We then had to wait for a late running northbound freight train at Garelochhead meaning we eventually headed back into Glasgow around an hour behind schedule. Such are the hazards of exploring the Highlands by train.

But at least there’s now the choice of a comfy seat to enjoy the spectacular views on selected trains and good work Abellio and ScotRail for that.

22 thoughts on “On board the Highland Explorer”