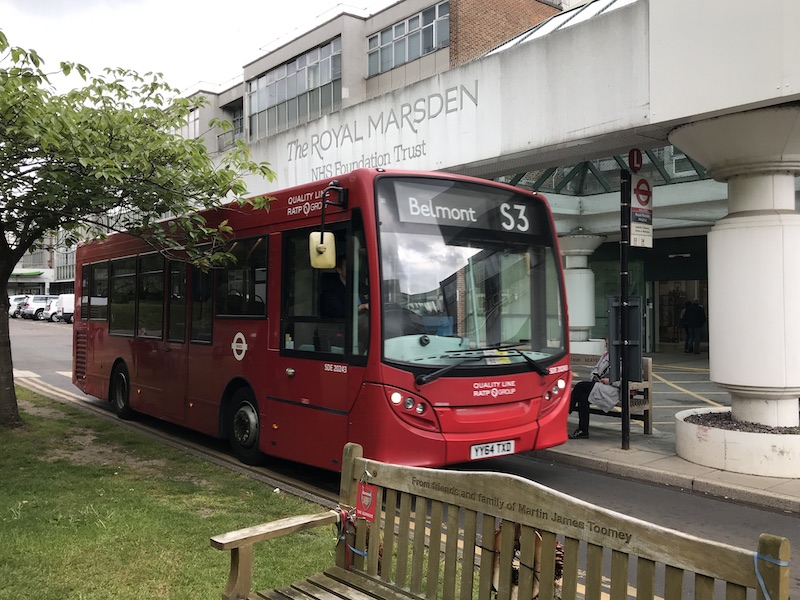 As the all too predictable battle for control of TfL rages amid the desperate need for further Covid funding from Government to keep the Capital’s transport going, bus passengers in Sutton and Croydon are being asked for their views on a raft of changes proposed for bus routes serving the Boroughs.

At first sight the proposals look fiendishly complex but having taken a good look at the details and taken a few rides around the area on the affected bus routes I’ve concluded while some are a luxury we can do without in the current dire financial climate, quite a few of the changes make good sense.

Highest profile proposal affects route 407 linking Sutton with Croydon and then south to Caterham, operated by double deck buses every 12 minutes. TfL propose spliting the route in Croydon creating two shorter replacements, the original 407 still plying its way between Sutton and Croydon every 12 minutes and a new route 443 running between West Croydon and Caterham with double deck buses at a reduced 15 minute frequency.

Based on my recent trip down to Caterham that reduced frequency looks appropriate for the numbers travelling south of Croydon. New route 443 will also take a slightly different route in Croydon town centre, using the Reeves Corner and Old Town route to the west rather than Wellesley Road and High Street to the east, so perhaps not so convenient for East Croydon but probably makes sense. So this plan gets a tick.

Also in the Caterham neck of the woods, TfL propose extending half hourly route 434 from its current terminus at a nondescript roundabout south of Whyteleafe, to the more logical terminus at Caterham one mile further south.

This will probably mean an extra bus as the route between Purley and Kenley on the way to Whyteleafe is also up for change to a slightly more circuitous route along Higher Drive (shown in green on the map below), where some new houses are being built, instead of its current route along parallel Northwood Oaks.

I’m finding it hard to give new route 439 a tick. It looks suspiciously like a kite flyer to me. Adding an extra half hourly service down Purley Way (currently served by route 289 every 12 minutes) seems a bit of a luxury as does adding it to Godstone Road between Kenley and south of Whyteleafe where I can’t see it adding anything effective to the aforementioned new 15 minute frequency on the 443 (ex 407) especially as it doesn’t continue to Caterham.

So the new 439 looks like an expensive luxury serving no particular purpose other than allowing the 434 to serve a few new houses in Higher Drive, where there’s never been a bus route and not surprisingly seems to be full of cars along most of its length.

In the current funding situation, this proposal needs binning.

Residents of Old Lodge Lane will no doubt be pleased to have the 12 minute frequency route 312 rather than the 20 minute frequency 455 as well as a more direct routeing into Croydon but my trip down Old Lodge Lane didn’t generate many other passengers and I have my doubts this frequency increase is justified. So I’m not sure about a tick for this proposal, but I guess it’s a case of: if not the 312, then what?

Moving over towards Sutton, you can see from the map below how route S4 (dark pink) is extended to its new eastern terminus in Waddon Marsh which leaves a short section of route 455 between there and Croydon uncovered, but TfL explains the tram provides the link, which indeed it does. TfL report “approximately 145 passengers who currently use route 455 from West Croydon, Reeves Corner would need to use the Tram to or from Waddon Marsh where they would be able to change to route S4″.

A comment in the consultation implies route S4 will have a frequency increase from half hourly to every 20 minutes, which seems over generous in the current circumstances. “Approximately 1,040 people travelling to and from stops between Wallington town centre and Belmont Station would see an increase from a bus every 30 minutes to one every 20 minutes, Monday to Saturday daytimes. They would also gain a Sunday service.” Although not specifically spelt out, I assume this is the S4 running more frequently, which again, seems a bit of a luxury in the current financial climate.

The western end of route S4 is being replaced by another new route, the S2 which will run from the prisons at Belmont via the S4 route through Sutton to St Helier station. This makes sense, otherwise the S4 will be too long with too many twists and turns. So a tick for this.

The map above also shows some minor changes to route S1 in the Middleton Road area between St Helier and Mitcham Junction. These are narrow roads with parking and frankly I’m surprised it’s taken TfL until now to finally give up trying to run buses in both directions along these roads.

TfL’s consultation makes the point longer buses are planned to operate on the S1 which will make turning the tight corners in this area even more of an issue, so no surprise these changes are proposed and make sense. There are bus stops relatively close by for residents to use.

A significant planned development in Sutton is the London Cancer Hub being built on the former Sutton Hopsital site adjacent to the Royal Marsden Hospital about a mile south of Sutton town centre and station.

It’s a twenty year project and will include a new acute hospital too.

TfL propose converting route 80 to double deck and curtailing its route at the new site which it currently passes on the way to Belmont’s prisons. This makes sense, so a tick for that.

It’s also proposed to extend route 164 (from Wimbledon) which currently terminates alongside Sutton Station to the new site when developments are further advanced. This makes sense too.

The final proposal sees a shortening of route S3 to terminate (from Malden Manor) at Sutton Station with its circuitous eastern section to Belmont station via Carshalton and Carshalton Beeches transferred to an extended route 413 (from Morden).

Also proposed is a rationalisation of roads served by both routes as well as route 470 in the Sutton Common area giving the S3 a more direct route along Sutton Common Road. These proposals probably make sense.

TfL’s description of the benefits from these proposals also includes the claim “re-routeing the S1 would mean it better serves both the Royal Marsden Hospital and London Cancer Hub as it would serve stops within walking distance of both. This would be particularly beneficial to people in the Banstead area but also people in Benhill, St Helier and Mitcham areas.” I don’t see any proposed re-routeing on the maps as described – route S1 looks unchanged at its southern end, passing the site of the London Cancer Hub so am not sure what they’re refering to here.

The following benefit is also somewhat marginal, I would have thought: “approximately 1,180 passengers travelling between points south of Downds Road (sic)and north of Belmont Station would have a faster journey time of around one minute”. (I think they mean Downs Road.)

Full details of these proposals can be found on TfL’s consultation webpage. Responses are required by Sunday 29th November 2020.

Based on previous experience, it might be some time before any of these changes are implemented, if ever. But in the meantime it’s nice to see some clear maps showing where bus routes go on TfL’s website.

17 thoughts on “Bus changes for Croydon and Sutton”