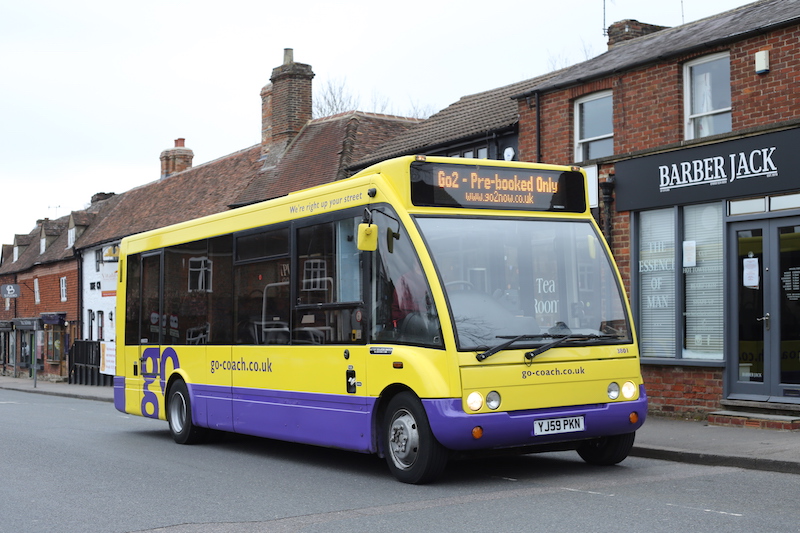 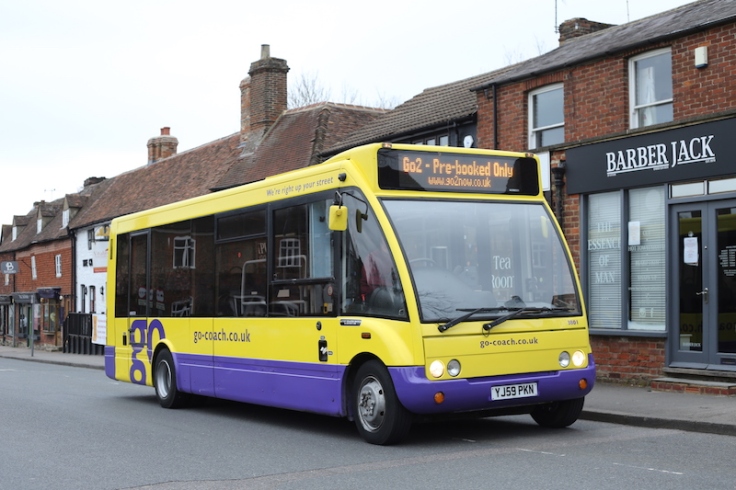 A couple of weeks ago I suggested these unprecedented times might be a good opportunity to give Demand Responsive Transport (DRT) a really good try out to see if its unproven business model would work in the current corona circumstances. With demand for traditional bus services plummeting to around 10% (or even less) of normal times leaving standard sized buses looking very empty and unloved, why not confine those buses to garage and let an algorithm based app controlled fleet of minibuses do their stuff across an area for the few people having to travel for essential purposes and see what happens?

Having run that idea up the flagpole on 21st March far from fluttering in the breeze, it sadly slid unfurled back down the slippery pole as TfL pulled the plug on DRT trials in Ealing and Sutton last weekend while Arriva withdrew their Click venture in Liverpool on Monday. There was also a commotion with Oxford’s PickMeUp on Tuesday when concessionary passholders were told their passes would no longer be valid from Wednesday 1st April, until Oxfordshire County Council performed an overnight u-turn on their decision to cease reimbursing, so its business as usual in Oxford … for now.

However in an exciting development, I’m delighted to report just as my blog was posted a fortnight ago, by pure coincidence, DRT app algorithm specialists, ViaVan, got in touch with the entrepreneurial owner of Sevenoaks based Go-Coach Hire, Austin Blackburn, and offered to work with him to develop a scheme for introduction in record breaking ‘Hospital Nightingale’ timescales and get a DRT scheme up and running for the Kent town and its environs commencing next Easter weekend.

As I explained in my blogpost enthusing about Go-Coach Hire after my ‘behind the scenes visit’ last October, Austin already had plans for an innovative DRT service using four Ford Transit Tourneos in the rural hinterland around Sevenoaks for introduction on 11th May. This plan uses private hire licences and operates in conjunction with Kent, Sevenoaks and Tonbridge councils and Age UK subsuming existing contracts into the new operation. Not surprisingly the scheme has now been put on hold until post corona. 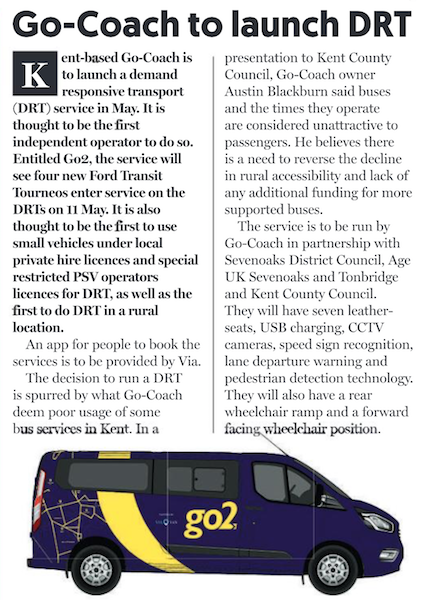 The new DRT being set up from next Saturday, 11th April, sees all Go-Coach Hire’s conventional bus routes in Sevenoaks and neighbouring communities normally operated by seven buses completely withdrawn and replaced with a fleet of four Optare Solos available on demand either through the hastily put together app, or for those without a smartphone, by contacting a controller on a telephone. 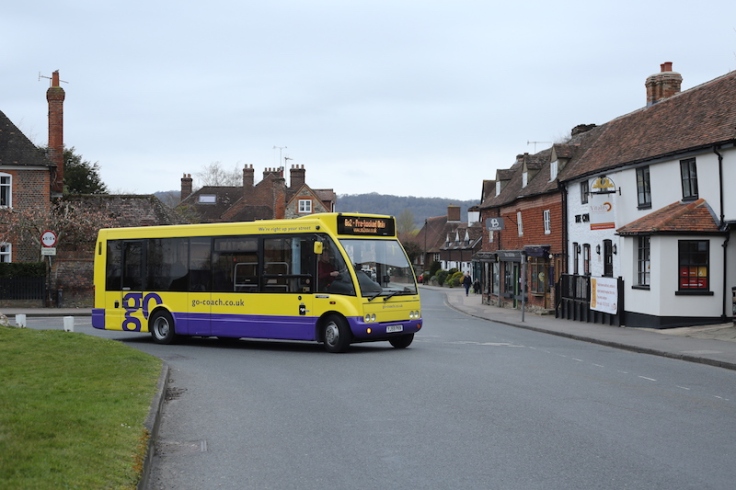 It’s a brilliantly innovative development. It’s just the right move at the right time. Never have we seen passenger demand for bus travel collapse at the rate it has over the last three weeks due to the exceptional corona circumstances. Exceptional times merit exceptional measures and running four small buses to a completely flexible demand led schedule across a fairly large area stretching from Westerham to Tonbridge and Edenbridge to Swanley as well as Sevenoaks itself is a brilliant way of keeping costs right down yet still provide a service that is set to meet the needs of the few people who have to travel for essential work, shopping or medical help. 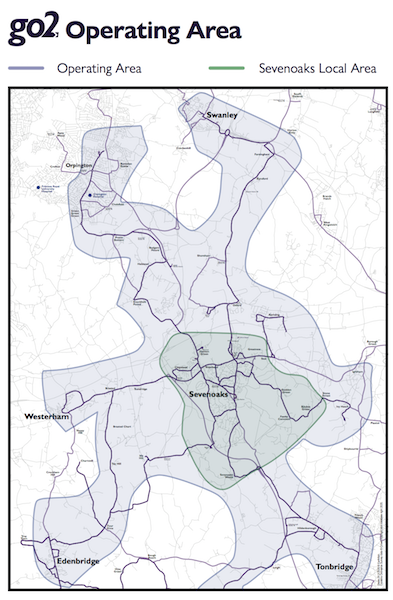 Commendably, existing fares and concessionary pass acceptance will continue. A booking on the app or over the phone can include up to three passengers at a time and social distance measures will be in force on board the buses. The aim is to get one of the four buses, strategically located across the area, to those making a booking within thirty minutes of the request being made. There’ll be links to local hospitals outside the immediate Sevenoaks area (at Pembury, Orpington, Queen Mary’s and Princess Royal) for a fixed £5 cost.

Huge credit to Austin for setting this up in record time as well as ViaVan for the app development and Kent County Council who’ve not only shown flexibility in agreeing to the revolutionary change and maintaining the supported payments previously made for the traditional routes but are also helping with the app cost. 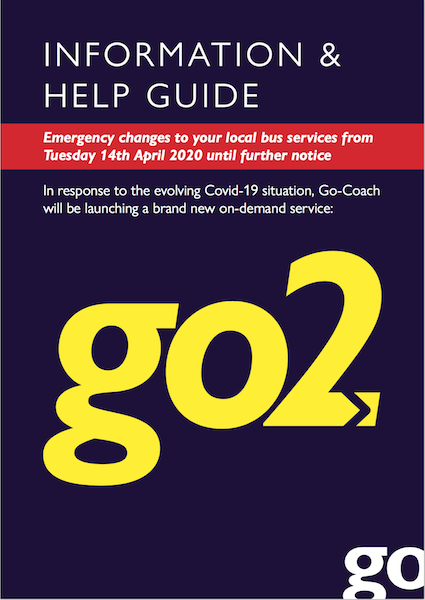 It’s certainly impressive to see a small bus company run by Austin and his energetic team coming up with a novel solution to the current dilemma of providing some semblance of a bus service for minimal demand. Well done to all concerned and it’ll be interesting to see how this trial works out; I’m only sorry I won’t be able to give it a go myself. 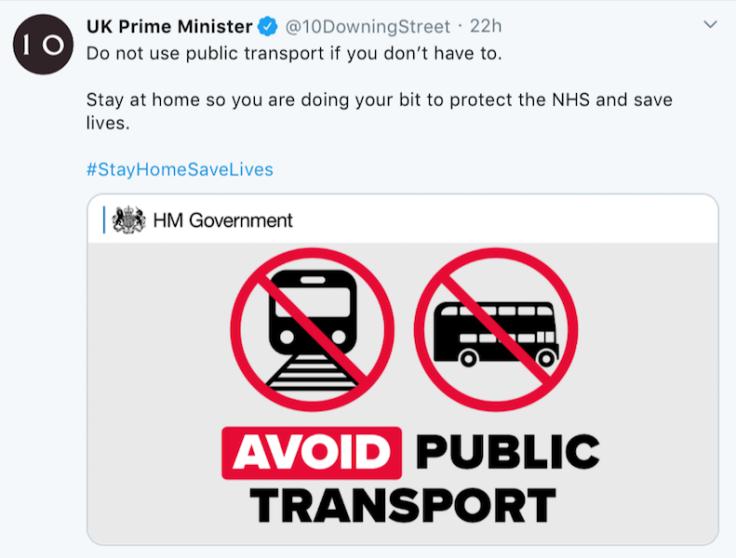 In other news this week the Government has been doing a lot of ‘ramping up’, including its advertising campaigns to implore us to stay at home. Who’d have thought we’d ever see a Government media campaign imploring us to avoid public transport! What strange times we’re living through. Not surprisingly and sadly there’ve been more cutbacks in services with many bus companies now running skeletal timetables to match the minimal numbers travelling. Before this morning’s announcement of an additional circa £370m grant to keep vital bus services running (in the form of an enhanced BSOG) and a £30m handout for local authorities for tendered routes, a number of bus companies have suspended services completely including Axe Valley Mini Travel in Axminster, and Pilkington’s local routes in Accrington. Hull Trains and Grand Central have also gone into hibernation until post corona as will Megabus’s express coach routes in England and Wales and National Express coaches after this weekend. ADL and Optare have stopped manufacturing. We’ve also seen the weekly and fortnightly bus and coach industry trade journals all suspend printed publication as the advertising market which sustains most of them has collapsed.

Meanwhile some companies are trying to generate a new market for bespoke travel for employers needing to get their essential workers to their essential work without taking the risk of using commercially provided routes – although all the major bus companies have been at pains to promote their superb cleaning regimes and social distancing adherence. 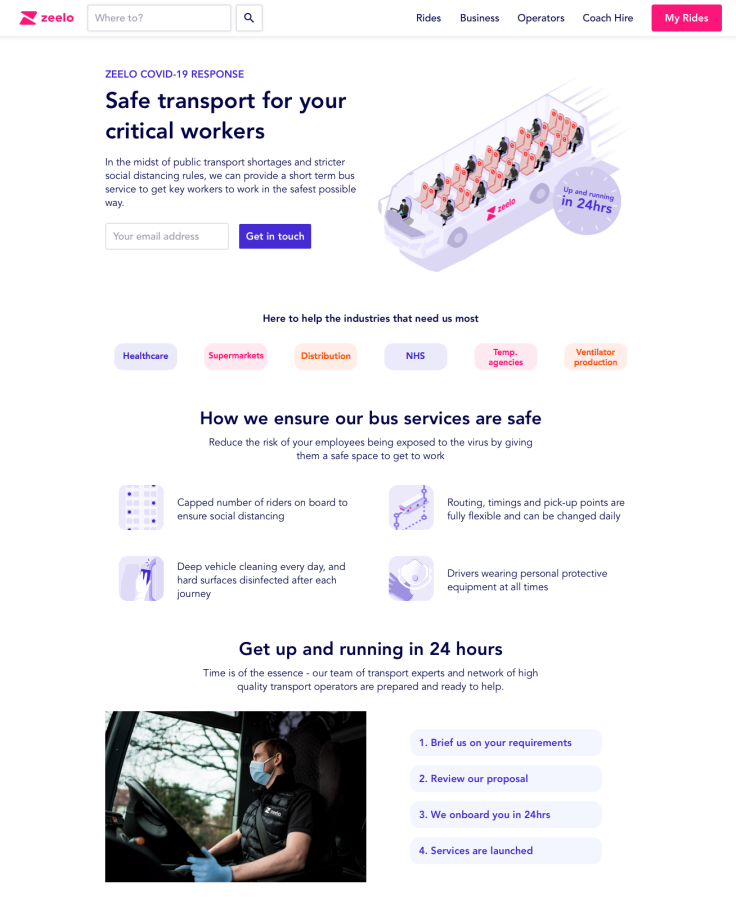 I’ve had emails in the last few days from both Snap and Zeelo promoting their prowess at organising such transport but I wonder if the market is really as big as they think.

Interestingly the Snap document attached to their email had a wording revamp overnight before being reissued yesterday with much greater emphasis on social distancing and contact tracing, for example from this…. 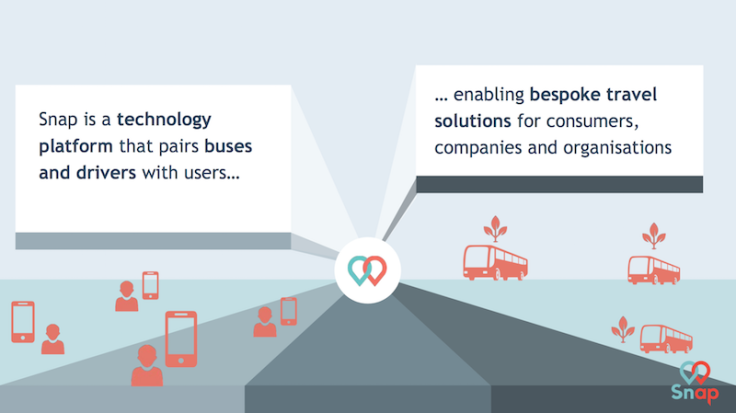 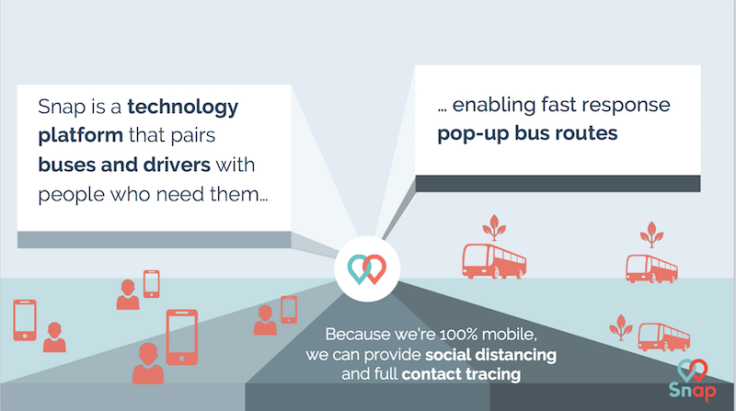 And a not so subtle change in it’s usual imagery from this …. Some NHS Trusts are arranging bespoke buses for their staff with Stagecoach in Hull and First Bus in South Yorkshire both promoting routes they are running exclusively for hospital staff. It’s a shame the latter haven’t made the timetables more ‘user friendly’ even though I’m sure they’ve been compiled in a bit of a rush, but I’m thinking it’s a bit much expecting hard working doctors, nurses and cleaners to wade through drivers’ running boards to work out when the bus is running? The routes are listed on the First Bus website here but the timetables can only be established by scroll down through five running boards here! A little bizarre.

And finally for now, another one for the ‘don’t you know there’s a Covid-19 pandemic going on and people are being told not to use public transport’ files: I see TfL are still promoting a ‘Buses survey’ on their website asking us to “tell us what you think about London’s buses” including such non-urgent-of-the-moment questions as ‘reliability of bus service’; ‘ease of accessibility’; ‘ease of obtaining information’ and so on and so on. Still, at least the webpage advises “do not travel unless essential”. 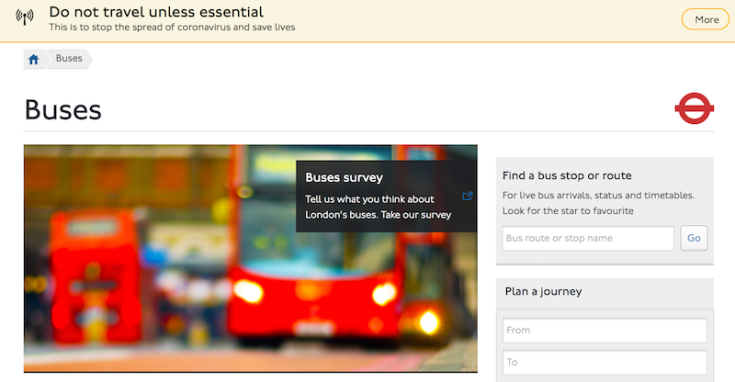 6 thoughts on “go2 goes to Sevenoaks”