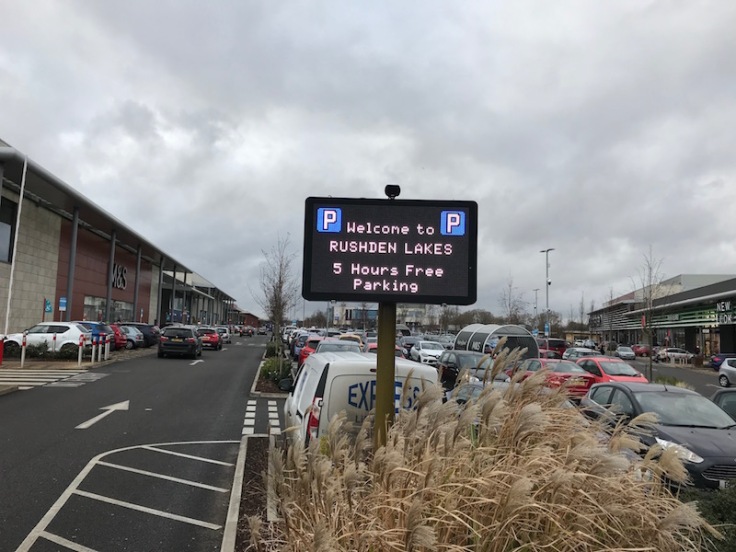 Ride sharing’s been around since the first horse bus began plying it’s way but the modern incarnation envisages using a website or app to book a journey and clever software linking you up with other people going the same way, because that’s what clever software can do. The fact there aren’t enough people going the same way to make for a business proposition doesn’t seem to be deterring people giving ride sharing a go.

New DRT schemes are being introduced in the next few weeks in Tees Valley, Watford and Leeds by established bus companies joining Liverpool, Leicester, Oxford, Sutton and Ealing where schemes are already demonstrating just how much money can be lost on such ventures.

A small scale scheme began operating last Autumn in Wellingborough by a company called Tandem and I decided to give it a try out this morning.

Tandem is like Zeelo or Snap. It doesn’t own any vehicles; it’s a small start up entrepreneurial company using software to collect bookings and farming any journeys out to a licensed private hire contractor who employs drivers as needed to make the trips. The hope always is that bookings will coincide and sharing will become a reality so revenue increases to an economic level rather than simply carrying single journey passengers paying uneconomic prices.

At the moment Tandem are offering two different ride options. There are peak time rides aimed at commuters living in Wellingborough and working in the nearby industrial estates of Raunds and Thrapston and there’s also workers and visitors to the relatively new Rushden Lakes shopping and leisure complex on the A45 about five miles outside Wellingborough.

It’s a £3.50 flat fare for the ride to Rushden Lakes – ‘share the convenience of a taxi for close to the price of a bus’ is the marketing slogan. As the first ride is free I jumped at the chance to try it out.

I’d already registered on the Tandem website so when I arrived at St Pancras to head north this morning all I needed to do was book my onward ride from Wellingborough station and look forward to sharing it with a stranger going my way too.

The To/From online booking page (there’s no bespoke app for Tandem that I could find) defaults to Wellingborough as the Pick Up location with a box for specifying more detail which brings a drop down menu. The station is easy to find as soon as I started to type “We…”.

The next screen defaults to Rushden Lakes as the destination when you click for the drop down menu – Tandem are obviously being cautious in these early days and only offering a many-to-one journey possibility, presumably to increase the chances of finding a journey match, rather than attempt ride sharing to any destination in Wellingborough.

The next screen requires a time to be specified but crucially it’s the arrival time at Rushden Lakes rather than a desired pick up time. This gave me a dilemma as my train arrived into Wellingborough at 10:55 and I didn’t know how long the journey to Rushden Lakes would take – even more of a ponder the drop down menu only gave hourly arrival times on the hour.

I plumped for midday thinking 11:00 would make it too tight for the pick up time, at the station, whenever that may be, although this was ‘greyed out’ in any event. Indeed I noticed earlier morning and mid to late afternoon times were all greyed out, presumably that’s when resources are concentrated on serving the industrial areas. It didn’t give many options for arrival times at Rushden Lakes.

The next screen saw this booked ….

….and I immediately received a confirmatory text with an added baffling message that I would receive a confirmed pick up time the previous evening – luckily a phone number was also included.

I gave it a ring and the person answering explained that most bookings are made at least a day in advance – hence the final ‘default’ confirmation referring to the previous evening by when presumably bookings can be consolidated and pick up times sorted. Anyway he was aware of my booking and when I explained things he undertook to bring the pick up time forward as he noted I wouldn’t be sharing with anyone.

Sure enough within minutes I received another text confirming my pick up time from the station at a more convenient 11:00. 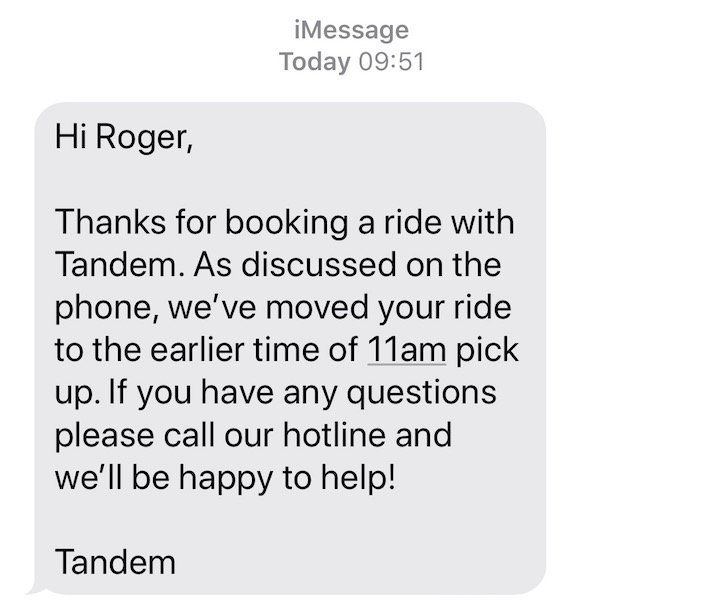 One further text asked for feedback and that was it.

Arriving at Wellingborough station I wasn’t sure how I would recognise my Tandem taxi so went to the taxi rank and mooched around.

I spotted a couple of anonymous looking private hire vehicles with a driver looking speculatively at me, as I did across at him. The looks did it and I wandered over to find he was indeed expecting me and we were soon heading off towards Rushden Lakes.

My driver explained he works for a few companies including Tandem and suggested it would help if they gave him a branded sticker to go in the windscreen. That   seemed a sensible suggestion.

So far he’d only ever taken one shared ride during his work for Tandem but even that was a cheat as it was two members of the same family who lived at different addresses and wanted to travel together!

He explained that Rushden Lakes opened in 2017, last year expanded with the cinema complex and can get very congested at weekends with the entry and exit road from the same roundabout on the A45. There was no taxi rank and just one bus stop (and a cycle stand) near the entrance/exit. 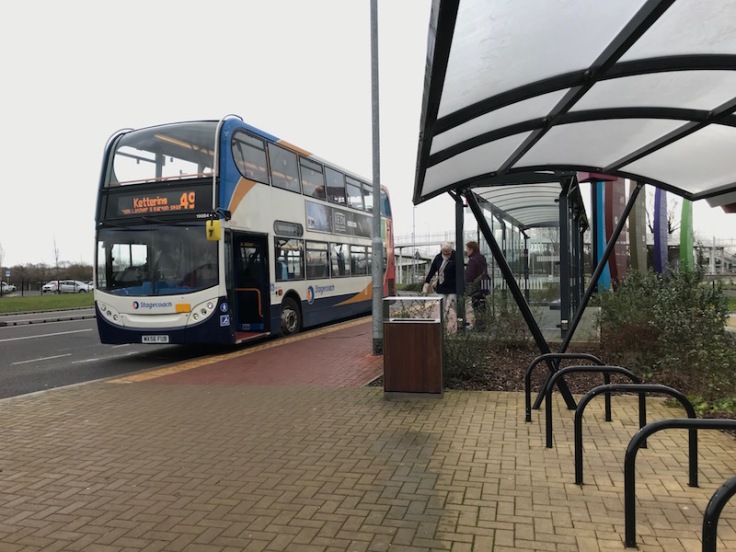 When we arrived, after about a ten minute journey, I saw exactly what he meant and was pleased I’d booked in the direction I had as I’m not sure how we’d have met each other if I’d booked the pick up at Rushden Lakes with its vast car park and no precise pick up location/vehicle tracking/registration number text/web link provided by Tandem as happens with other ride share booking software. 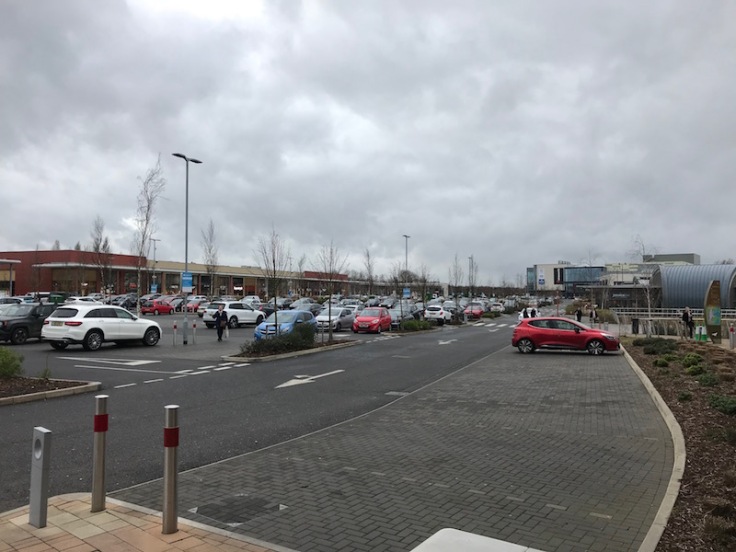 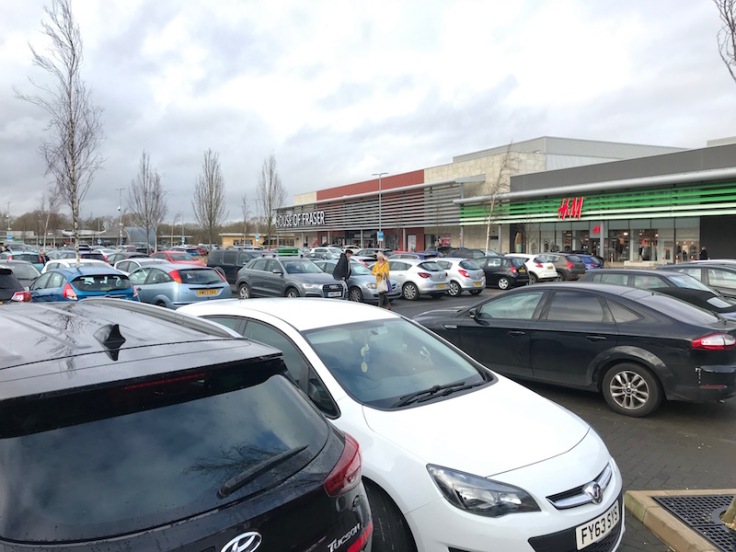 Rushden Lakes is a motorists’ mecca with five hours free parking in what must be hundreds and hundreds of parking paces surrounded by all the usual ‘High Street’ names including a multi-screen cinema and lots of restaurants.

The best bit are the walks around the adjoining lakes which are graded at various lengths and arduousness/mudiness.

I can see why Tandem might think providing a bespoke alternative to taking the car, the bus or a traditional taxi to Rushden Lakes might catch on. But limiting journey times to once an hour means it’s more restrictive than the bus options offered by Stagecoach which include the hourly Gold branded X47 and hourly route 49 both of which link much of Wellingborough to Rushden Lakes – as well as other destinations.

Good luck to the guys at Tandem but I reckon like ride sharing DRT everywhere else it’s going to be a struggle to make it work. 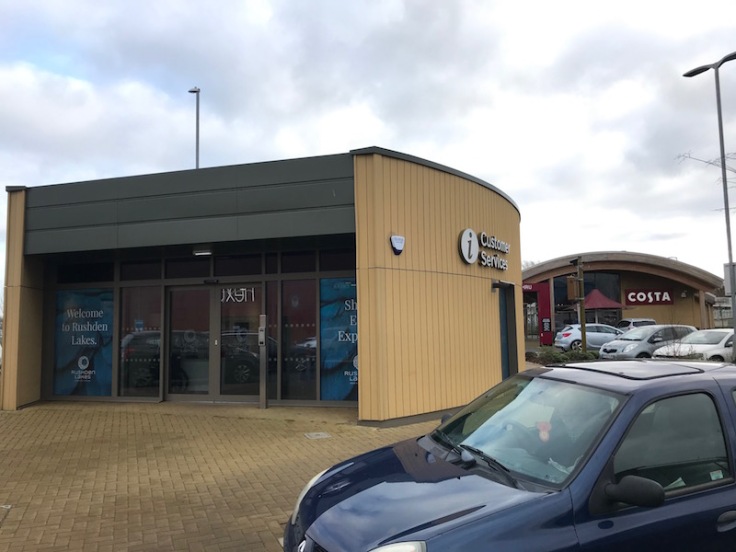 I popped into the Customer Information unit on my wander round and at least on asking they had information in a desk drawer about bus departures to the extent of handing me coloured printed copies of the timetables for the Stagecoach X47 and route 49 from the Internet. Also, well done to Stagecoach for providing departure times at the one bus stop serving the complex.

The Rushden Lakes website also includes a section on How To Find Us – including by public transport, but this didn’t seem to be up to date with the latest Stagecoach information (mentioning route 45 which no longer runs and not indicating the 49 goes to Wellingborough) and it also makes no mention of Tandem.

Back in Wellingborough unsurprisingly the ‘High Street’ didn’t look as though it was prospering – I’m not surprised with this significant ‘out of town’ competition, which unlike many such locations, does actually offer a rather pleasant setting alongside the lakes even in the depths of winter. I can imagine it makes for a lovely walk and explore in the better weather months. If you can ignore all those hundreds of parked cars.

8 thoughts on “By Tandem to Rushden Lakes”