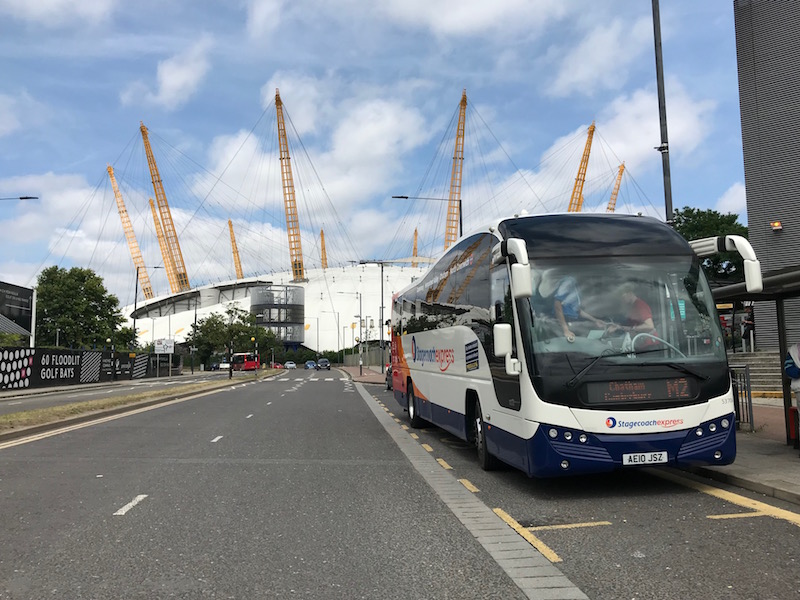 You have to hand it to Stagecoach. Whenever they give a new commercial service a go, they don’t hold back. Their South West Falcon introduced in 2016 linking Bristol with Plymouth was a massive investment involving a fleet of brand new coaches running hourly during the day as well as night journeys. It was a huge commercial risk which I’m pleased to see seems to have paid off.

This week sees another high profile brand new inter-urban express route take to the road, this time pioneered by Stagecoach South East and operating between Canterbury and North Greenwich for the O2 as well as a handy connection to the Jubilee Line for onward travel into central London.

The ambitious timetable provides an hourly service seven days a week with a first Monday to Friday journey as early as 04:55 from Canterbury (even 06:40 at weekends) and a last daily journey back from North Greenwich as late as 23:10. That’s very impressive for a start up route and very much in the Stagecoach mould of throwing everything at it from the start.

Five vehicles are needed to run the service and I understand there’s one spare available. They’re nine year old Volvo B9R/Plaxton Elites which have been around the Group a bit having seen service in East Scotland as well as elsewhere. They’re decent coaches though and very suitable for this latest venture. There’s the usual Wi-fi and a three pin plug socket per pair of seats and an on board toilet at the rear. 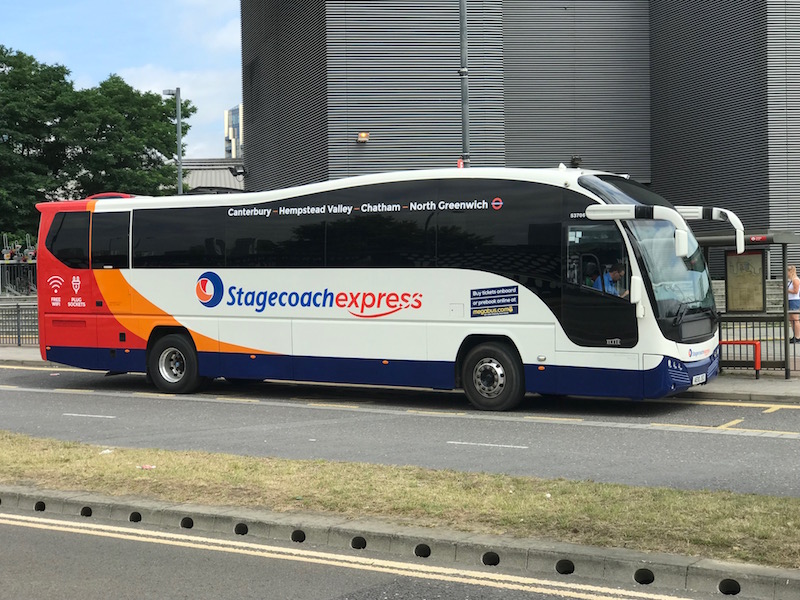 Time comparisons with the rail alternative are not particularly favourable bearing in mind Canterbury and Faversham both enjoy High Speed trains whisking you to St Pancras (best time to Canterbury is 56 minutes) but whereas HS1 passengers are stung with premium ticket prices Stagecoach can offer more attractive fares.

An Anytime day return from Canterbury to St Pancras on the train including the HS1 premium sets you back £72.70 with off-peak costing £38.90. However a weekly Anytime season is £167.40 which for five days travel works out at £33.48 per day, and if you take the non HS1 version it’s £139.60 or £27.92 per day, although journey times are much longer – it takes as long as the M2. Interestingly though, the £27.92 works out cheaper than paying two peak singles on the M2 coach at £30 (although it’s £24 online). I can’t see any availability of return tickets or commuter weeklies on the M2 advertised online and strangely there’s no reference to fares at all in the timetable leaflet; nor any reference to fares on the rather understated vehicle livery. 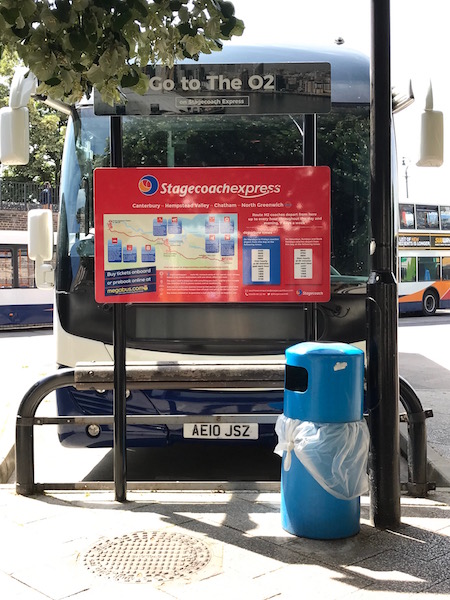 I took a ride on the 11:50 from Canterbury to North Greenwich this morning to see how the new service is bedding in.

Thanks to Highways England closing the M2 motorway yesterday for ‘essential maintenance’ putting the kibosh on Stagecoach’s inaugural day for the M2 coach route (it ran to a curtailed timetable and route) today was the first day offering a full service on the M2 on the M2 (if you see what I mean).

It’s always a bit scary running a brand new service during its first few days especially one as intense as the hourly M2, as despite all the planning, organisation and pre launch publicity and marketing, passengers may simply not appear. It can be a bit dispiriting.

Although I was the only passenger this morning on the 11:50 departure the driver was very friendly and very upbeat and positive about the new service. Indeed, he’d left his job at another well established coach company running commuter coaches between Kent and London just so he could be part of this new venture. That impressed me. I hope his confidence and optimism is well placed.

He drove at a very steady pace and despite leaving a couple of minutes late we passed the Perry Court stop in Faversham spot on time at 12:08. This stop is on the A251 (off the A2) just before junction 6 on the M2 which we joined.

I appreciate the time penalty of doing a circuit of Faversham town centre might be unattractive, but I wonder if there could be a bus stop located slightly closer for the convenience and attraction of serving Faversham. Perry Court didn’t look particularly convenient. It would also proivde an excellent non-stop Faversham to Canterbury service although I appreciate there’s already the half-hourly 3X taking just 24 minutes for that journey,

We were then on the M2 through to junction 4 where we came off to serve the Hempstead Valley shopping centre. We arrived five minutes ahead of the scheduled departure time of 12:33 so it made me wonder whether a tour of Faversham town centre could be accommodated after all – it would probably only take about the five minutes we sat at Hempstead Valley. 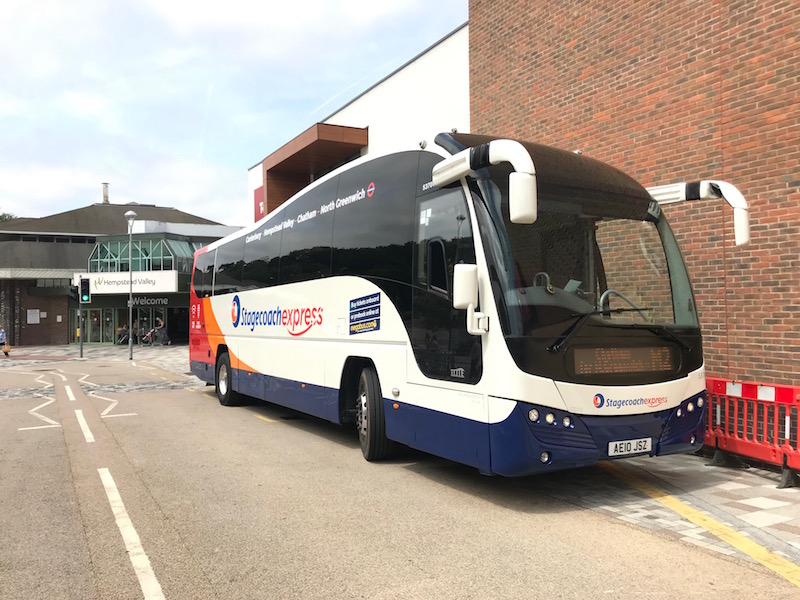 Onward to Chatham bus station where we arrived ten minutes ahead of the scheduled departure at 11:59. There’s definitely some cautious running time allowances in this timetable. 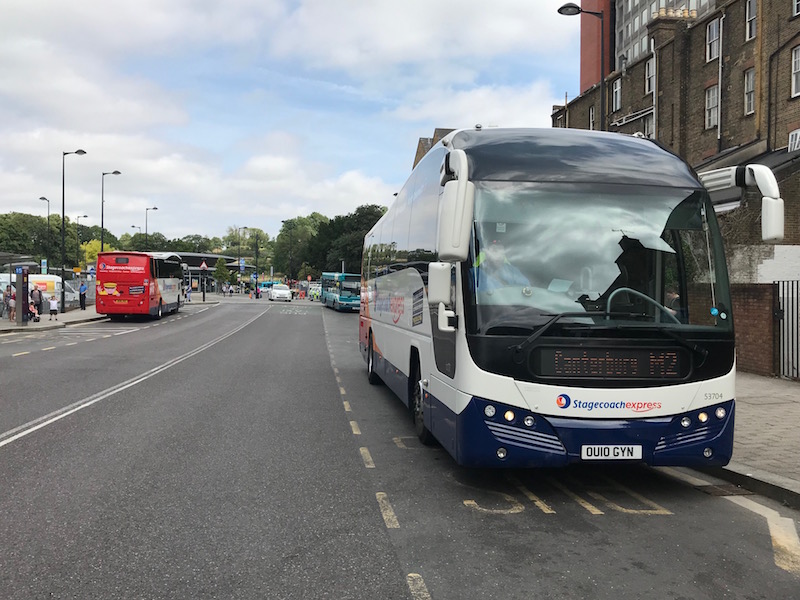 We left via the Dockyard and Maritime quarter and then through the Medway Tunnel which brought us on to the A2 and the forty minute ride to North Greenwich. Traffic was as busy as usual even at lunch time as we neared Greenwich and the Blackwall Tunnel approach road and we lost five minutes negotiating the traffic light junctions before reaching the North Greenwich terminus alongside the Underground station and O2 at 13:49 instead of 13:44. 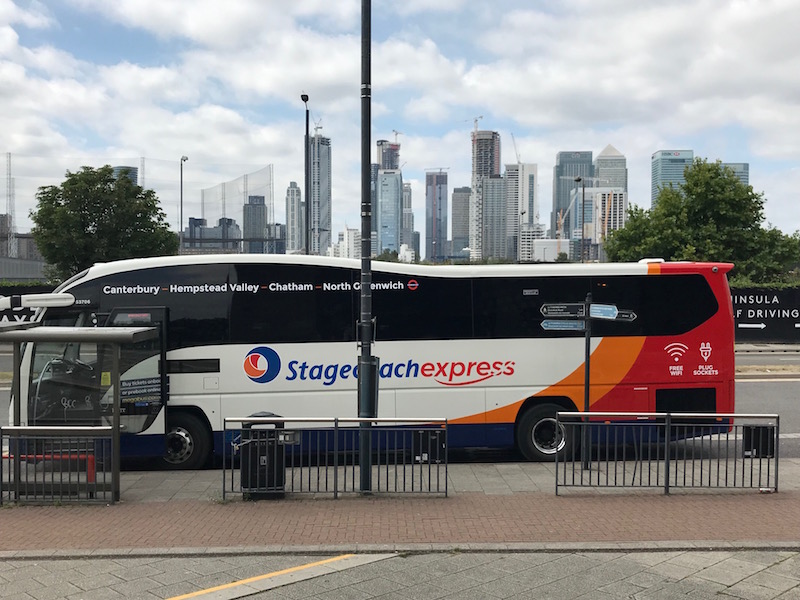 The driver and bus had stand time of 21 minutes until the return journey to Canterbury leaves at 14:05.

Stand time at Canterbury in the off peak is a very generous 54 minutes; all credit to Stagecoach for starting the timetable off with a very cautious and generous timing allowance which will help ensure reliability, subject to the random nature of traffic delays on this busy road corridor. 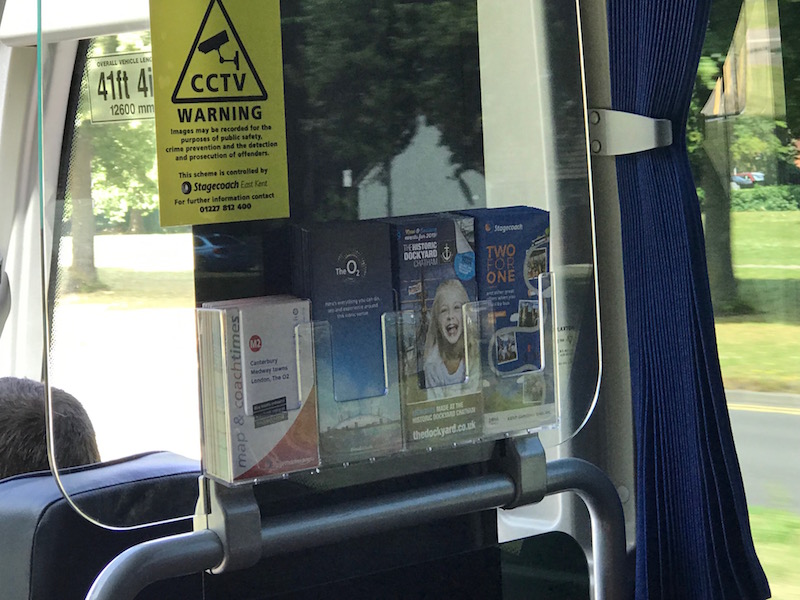 It was good to see timetable leaflets and other literature available inside the coach as well as in Stagecoach’s Canterbury travel shop and I also spotted supplies and information at Chatham bus station (bottom right). 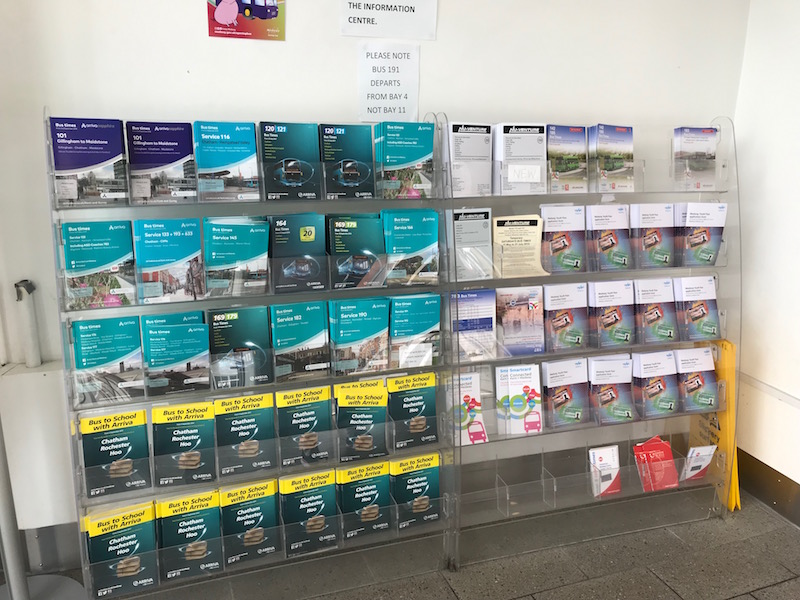 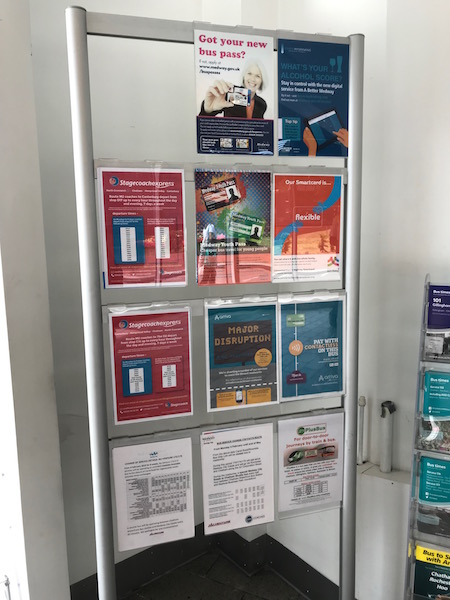 Bus stops had been updated with reference to the M2 as well as departure times at Canterbury and Hempstead Valley but the fancy electronic signs at Chatham bus station were all blank as usual. 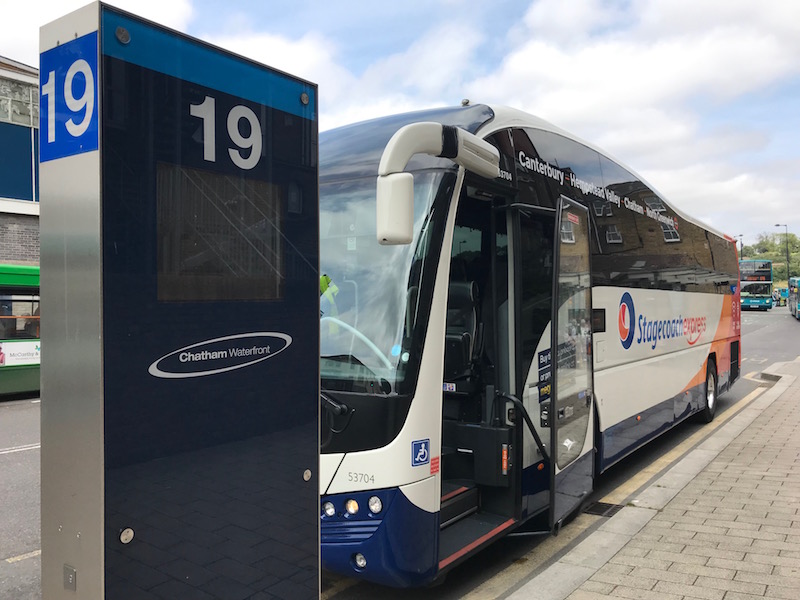 It also didn’t surprise me to see TfL make no reference to the new M2 at North Greenwich. They really are hopeless. 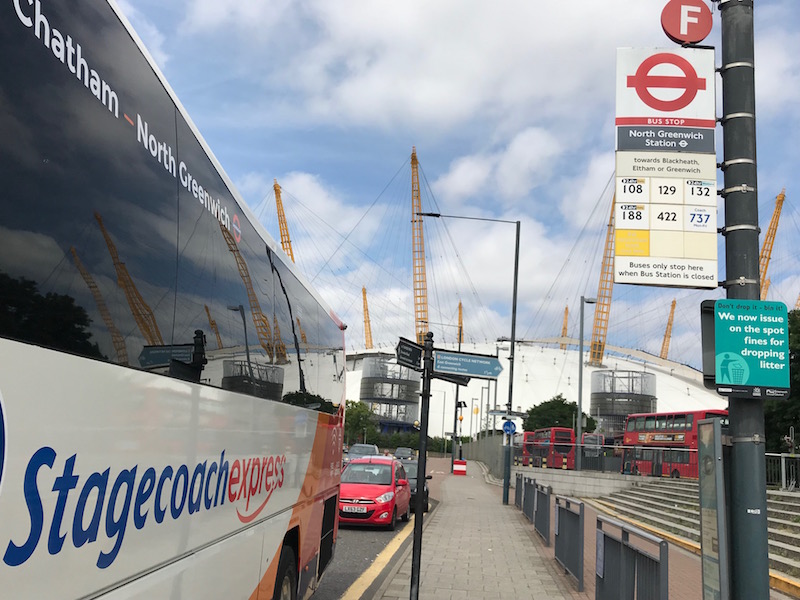 It’s very welcome to see another big investment in a new commercial service by Stagecoach and it’s obvious a lot of thought has gone into the planning and logistics of the M2 and it was good to see publicity was prominent along the route. Well done to everyone involved. But, as always with services of this kind, it’s a HUGE market to serve. On the one hand this shows the potential – Canterbury, Chatham, Greenwich, the O2 and connections to London are all great places to visit and they’re all on the M2’s radar – but on the other hand it shows the enormous challenge of getting the service known by potential passengers across such a massive market.

I do think the fares package may need some adjustment, particularly the need for discounted returns and perhaps weekly tickets to attract commuters. It seems odd not to publicise fares more dramatically including whatever the discounts are for students and seniors.

I understand there’ll be a full review of the service after six months. I reckon it’ll need at least a year, and probably eighteen months to two years to really established itself and see if there is a sustainable commercial market. Oxford Bus pulled the plug within six months of starting their Oxford to Birmingham coach service in 2016. I always thought that was a bit too early; I hope the same doesn’t apply here. You have to be patient and be prepared to spend an awful lot on marketing and raising awareness. In this regard, while I like the ‘Stagecoach express’ brand and logo on the coaches, I do wonder whether the places served, the frequency and some reference to price needs to be incorporated more prominently to raise the profile.

Good luck and I wish the new service every success. 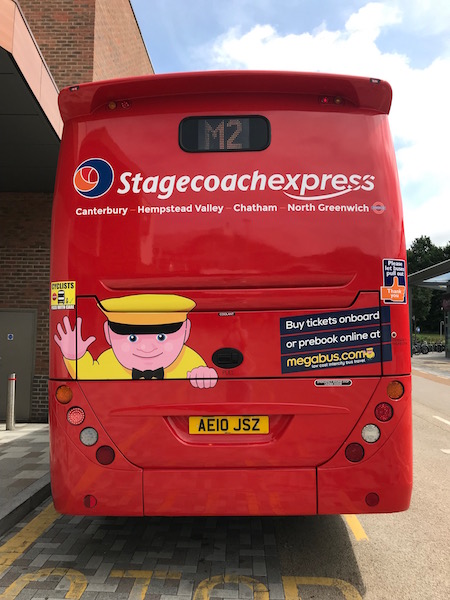 While I was out and about today I popped from North Greenwich over to nearby Woolwich to take a ride on another new service – TfL’s route 301 which began on the Saturday before last running between Woolwich and Bexleyheath. 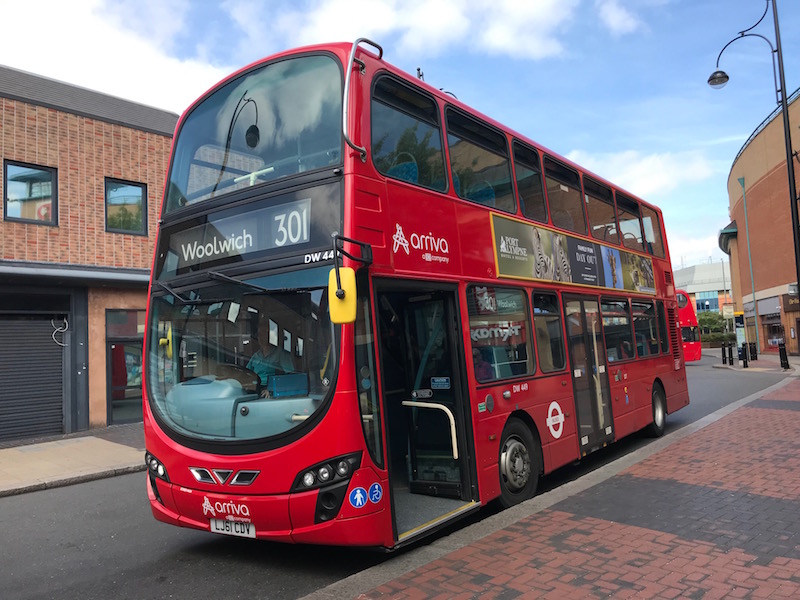 It’s not very often TfL introduce a brand new service; these days it’s all about cut backs in frequencies and direct journeys, so it makes a pleasant change to try out a new bus route in London, and even more so one that runs every 12 minutes (15 minutes evenings and Sundays) and from 05:40 through to 01:00. Not bad going for a route that effectively parallels four other routes along the way rather than carving out any new territory. No hopper fare for passengers here; they can now travel through from Woolwich via Plumstead, Thamesmead, Abbey Wood and Long Lane to Bexleyheath without changing.

End-to-end journey time is 38 minutes off peak rising to 46 minutes in the peak. You’d expect on a 12 minute frequency to need about eight or nine buses to make that work. This being TfL land the PVR is actually 10 buses.

It’s strange this route has been introduced now as it was designed in conjunction with the opening of Crossrail; forming part of the consultation surrounding changes to bus routes in south east London for when Crossrail comes to Abbey Wood. The fact that’s been delayed until at least later next year makes it’s hard to see why the 301 needs to run now. Indeed this afternoon we left Woolwich on time at 14:48 with just one other passenger on board, who I think, like me, was just trying the route out. 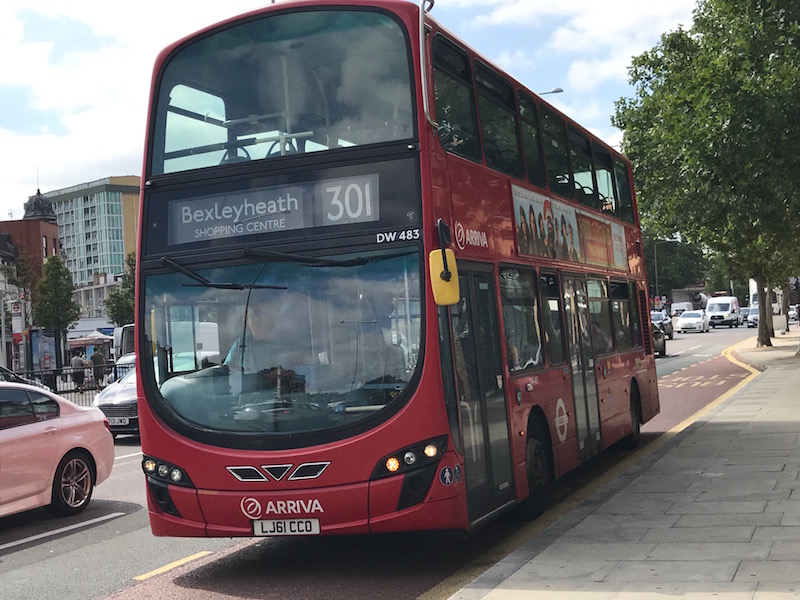 The lack of passengers wasn’t surprising bearing in mind we left Woolwich following a bus on the more frequent (every 10 minutes) route 472 which we parallel as far as Thamesmead….. 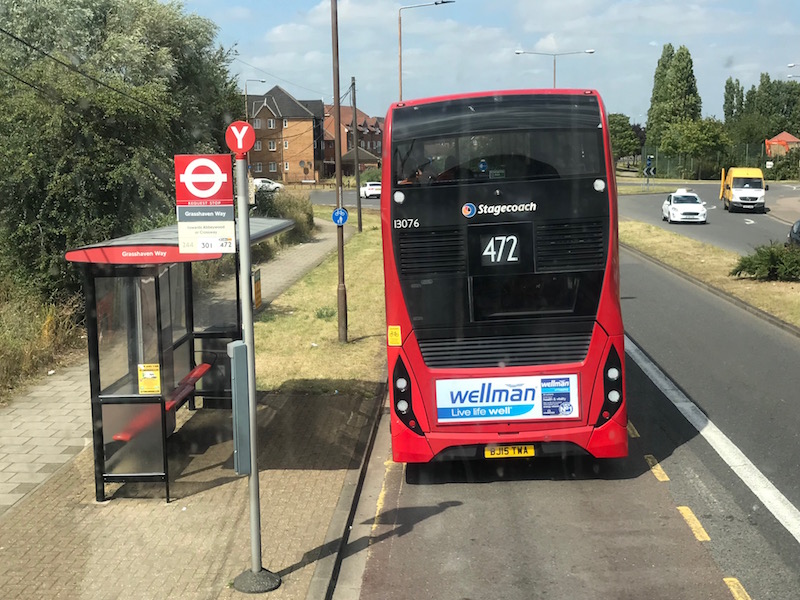 … then followed a bus on the more frequent (every 10 minutes) route 244 which we parallel to Abbey Wood ….. 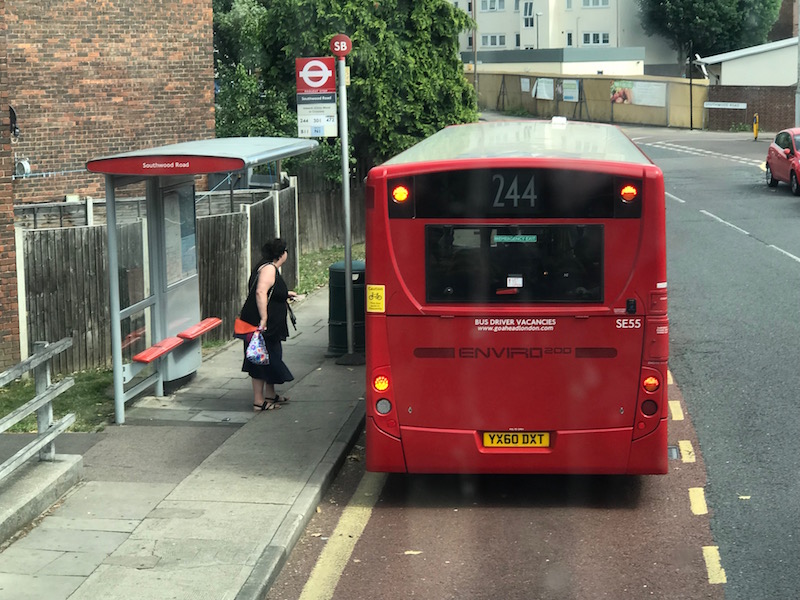 … then did pick one surprised passenger up as we paralleled the 15 minute frequency route B11, where we also came unstuck for a while in the rather narrow New Road by meeting a B11 coming the other way – whose driver got out to help us reverse… 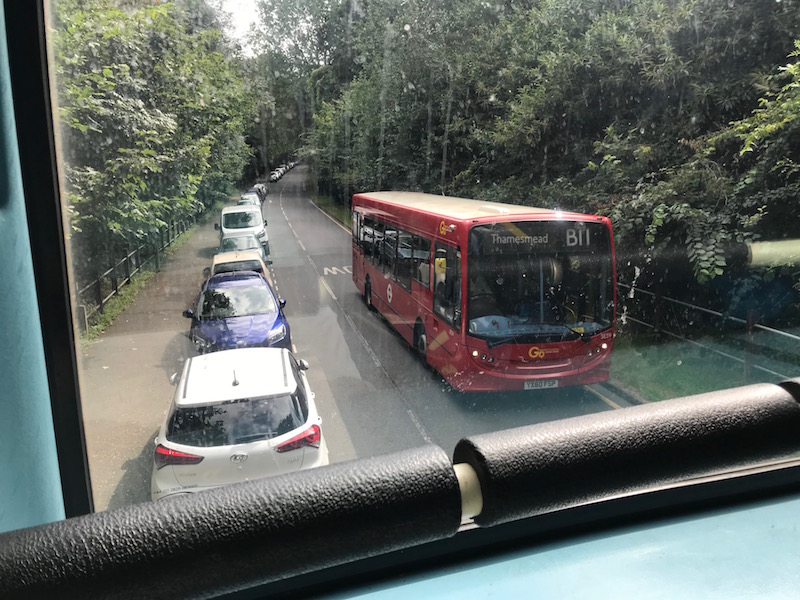 … and then as we joined the fourth and final route to parallel for out last section – the 401.. 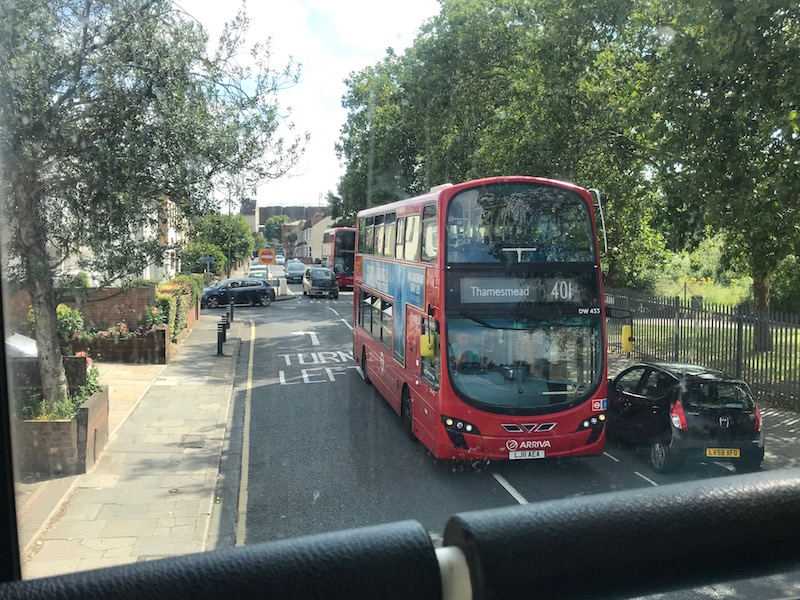 There was no 401 to tailgate but there were still no passengers. Rather frustratingly we we got held at a bus stop to regulate the service at 15:18 …. 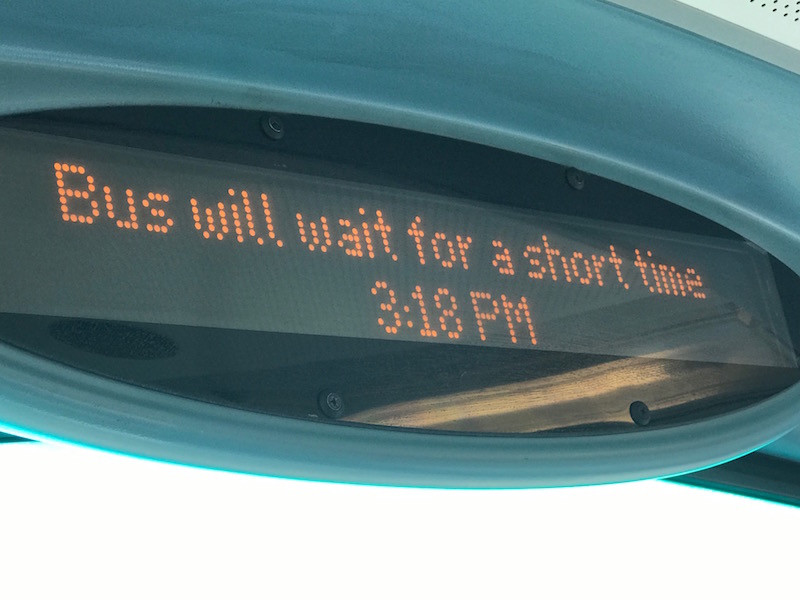 ….only to get going again and get held again to regulate the service at 15:23… 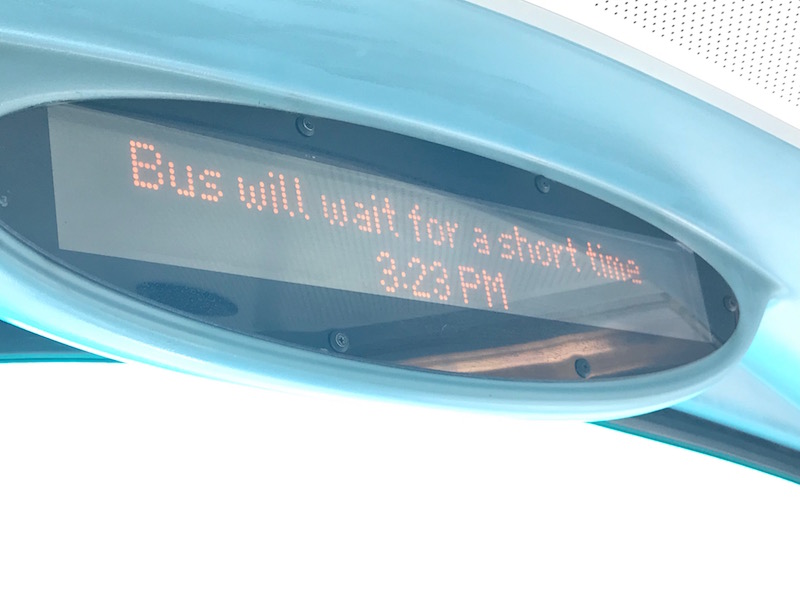 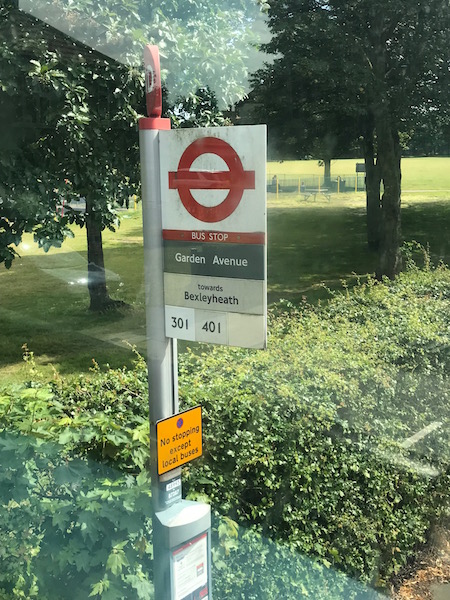 According to the timetable we weren’t due into Bexleyheath until 15:30 so far better to keep me and the other passenger waiting at the penultimate stop just outside until the due time! That’s London buses for you.

I can’t see the 301 doing anything more than the 472, 244, B11 and 401 have been doing for some time. Once Crossrail trains start running it’ll likely be a different story. 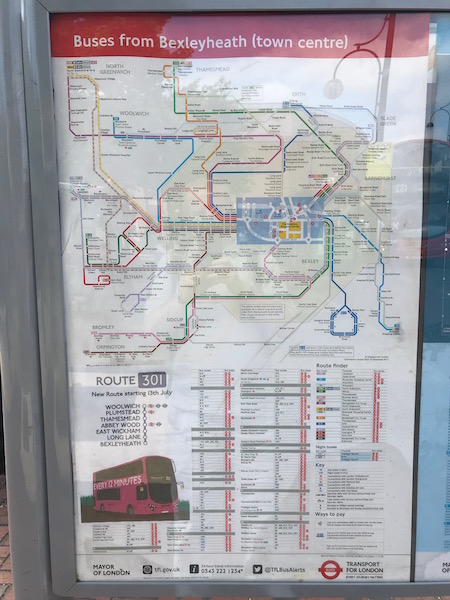 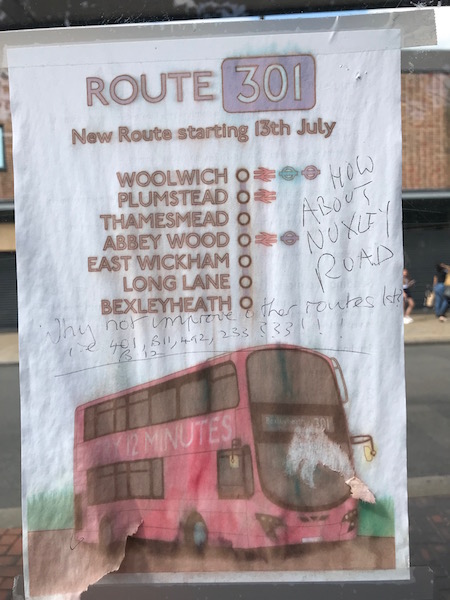 Although bus stops and timetable cases had been updated along the route, spider route maps were devoid of any reference to the 301; but that’s no surprise. It took me a little time wandering around Woolwich to find the right bus stop, but eventually I tracked it down. 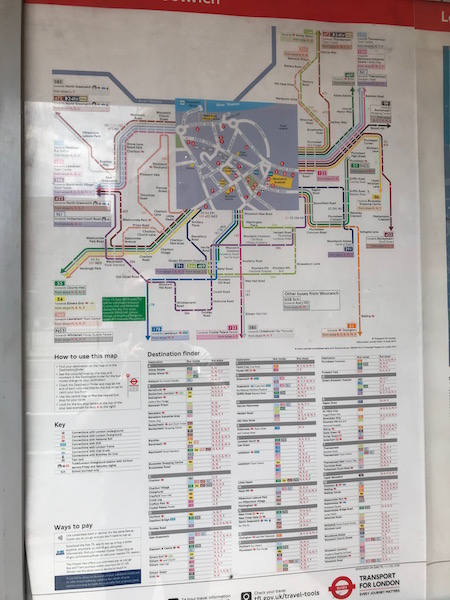 BusAndTrainUser – journeys around Britain by bus and train On the M2 on the M2 … and a 301
%d bloggers like this: