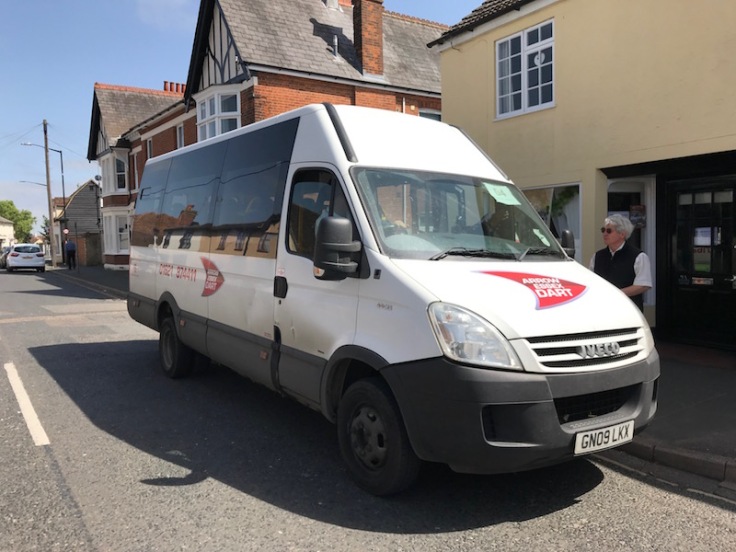 Back in April I took a ride on the bus route formerly known as the ‘Wiltshire Wigglybus’ between Pewsey and Devizes – a traditional rural bus route combined with a Dial-a-Ride flexible option and wrote about it here. Yesterday I thought it might be interesting to sample a similar type of rural bus service branded as DaRT over in the Dengie peninsular in Essex.

(The small ‘a’ in DaRT comes from the Essex County Council website to indicate, I assume, the D, R and T stand for Demand Responsive Transport but I noticed the branding on the bus was DART rather than DaRT.)

The Dengie peninsular is the bit of Essex between the River Blackwater (to the north) and River Crouch (to the south) jutting out south east of Chelmsford. It’s a sparsely populated part of the County, which most people tend to avoid unless they’ve got business or leisure there, making it very challenging to provide attractive public transport. It’s a lovely part of the country, topologically rather flat but with an attractive tranquil air about the area.

Fortunately there is a train service operated by Abellio run Greater Anglia along the southern edge of the peninsular from Southminster which connects at Wickford with the Southend-on-Sea to Liverpool Street service in the off peak, albiet at an annoying off-peak forty minute frequency, although there are convenient through trains to London in the peaks. Bus services to the small communities across the peninsula are a mix of a traditional route operated by First Essex, school buses and two DaRT routes funded by Essex County Council.

The First Essex route is a traditional half hourly trunk service numbered 31 running between Chelmsford, Maldon, Southminster and Burnham-on-Crouch (together with four minor route variations denoted as B, C, X and the Sunday 33).

DaRT 4 provides links between the small villages in the north east of Dengie such as Bradwell and Tillingham with Southminster and Burnham-on-Crouch while DaRT 5 does the same for villages across the middle, eg Cold Norton, Latchingdon and Althorne.

The idea behind DaRT is like a shared minibus-come-taxi service. This is how the Essex County Council website explains it…

It’s mainly DaRT routes 1, 2 and 3 which operate in the rural area north of the County which run to a completely flexible route pattern (around Braintree and West Uttlesford) whereas on Dengie, DaRT 4 runs more like a traditional bus route with a fixed route and timetable while DaRT 5 has a fixed route but with no timetable. Both routes are operated by Ace Taxis using minibuses.

I was a bit put off by the “there must be sufficient volume of passengers with similar itineraries” clause in the ‘instructions’ wondering how you’re fixed for travel if there aren’t (sufficient volume) so decided to play it safe by trying out DaRT 4 and travelled to Tillingham yesterday (in the east of Dengie) on the Friday only shopping journey run between school trips by Fords Coaches of Althorne from Chelmsford.

This off-peak weekly shopping journey from Dengie alternates between a fortnightly route 3 from Tillingham and a fortnightly route 6 from Althorne and Burnham-on-Crouch and both return from the bus stops adjacent to Chelmsford Market at 13:30. I was impressed to see a good crowd of shoppers already waiting by 13:15.

By 13:25 the bus had arrived and twenty-eight boarded ready for the journey home. Everyone just piled on the bus without showing any tickets or passes and I guess the transactions had all been sorted on the outward journey with it being a rarity for anyone to be making a single journey back to Tillingham on the return. I surprised the driver by not only explaining that’s what I was doing but also needed to pay rather than have a concessionary pass. A single for £4 seemed fairly good value.

It was one of those chatty buses where everyone knew everyone and all wished each other fond farewells as they alighted at bus stops along the route. We left Chelmsford spot on time and were due to arrive in Tillingham at 14:45 so I wasn’t unduly worried that my connection on to the DaRT 4 minibus gave six minutes before that departed at 14:51 having begun its journey at Bradwell Waterside.

… but I got concerned that by then with all the prolonged fond farewells we were six minutes behind schedule making for a tight connection in Tillingham just down the road. I kept an eye out for the DaRT minibus to come into view behind us and sure enough it appeared just as we entered the village of Tillingham….

Luckily the driver got the message and beckoned me to come back and board before he continued overtaking the double decker and within seconds we were on our way to Southminster and Burnham-on-Crouch. 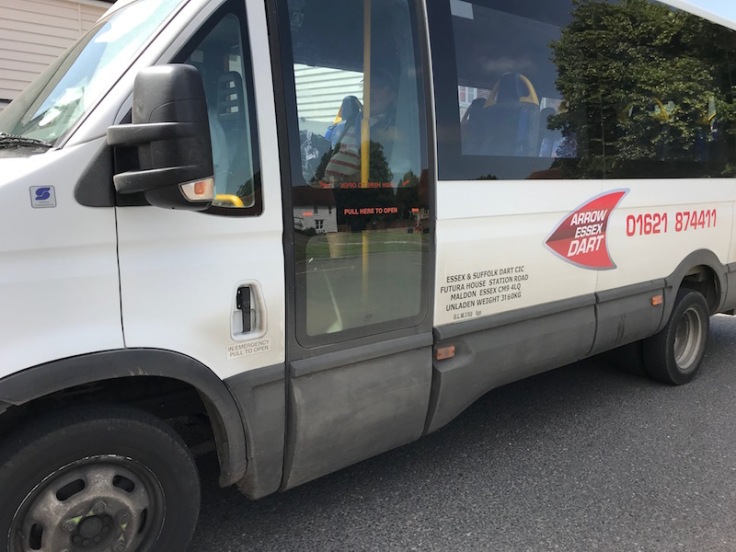 The driver didn’t seem interested in wanting me to pay a fare and drove off straight away at some speed while chatting to the passenger on board returning home from his day’s fishing.

I’d rung the operator, Ace Taxis, earlier in the morning when in Chelmsford to book my journey as instructed but was told I needn’t do that as it’s just like a bus service. I guess with a fixed timetable …

… that’s the case with this route although when we got to Southminster there was a bus and driver change …. 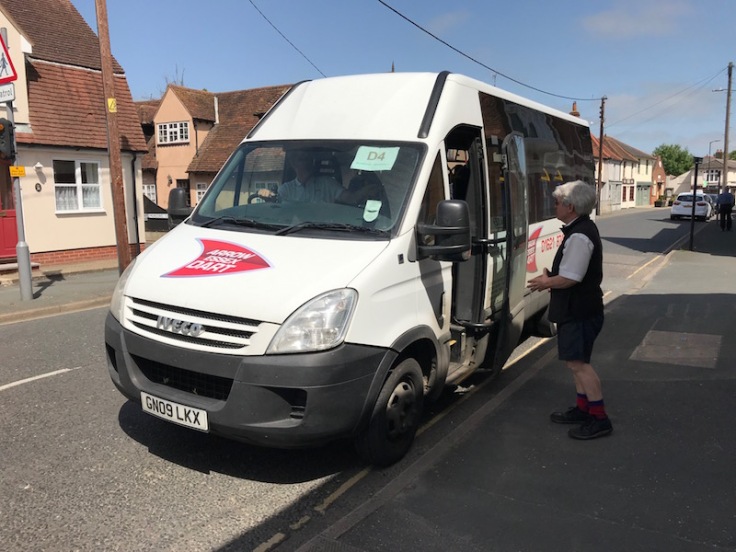 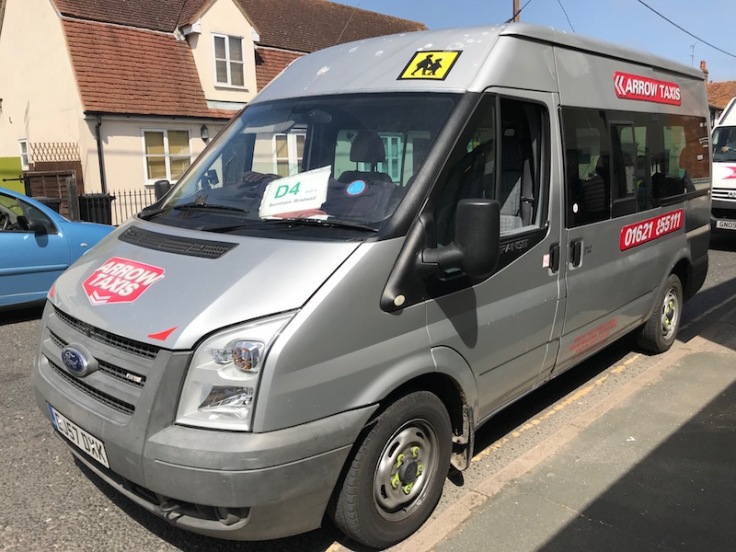 …to a smaller taxi-sized minibus with a self-opening door which I guess is more often used on the flexible booked DaRT 5 route ….

Our fisherman friend had got off at the bus change in Southminster so it was just me and the friendly new driver travelling on to Burnham-on-Crouch where we did a loop around a residential area and picked up a waiting passenger (Peter, who’s “on the bus committee”) before arriving at the station where I got off as they continued to the terminus at the Clock Tower, a little further on, before returning on the next journey back to Bradwell Waterside for one more return trip. It didn’t look to me that it was going to be busy.

So the DaRT idea left me a bit confused as to whether it’s a bus or a taxi; whether it’s fixed or flexible; whether it’s for passengers travelling singly or a minimum group required. But at least it’s providing rural transport in a difficult to serve sparsely populated area, and good on Essex for doing just that. I hope the sparse loadings were not typical.

Meanwhile the shoppers special route 3 (and 6) to Chelmsford obviously bring in useful income for Fords Coaches to supplement a school contract while also providing a useful service for around thirty people living in Dengie.

7 thoughts on “DaRT about in Dengie”