Ten smart new buses began operating the 24/7 shuttle link between the airport and city centre from the middle of April so I was pleased to take a return journey on my visit to Glasgow earlier this week and give the improved service a try out.

In the world of extreme news release adjectives, First Bus was clearly beyond excited back in April as they launched the new buses. They’re “ultra-low” emission (Alexander Dennis E400 city with Euro VI diesel engines) and have “luxury padded seating” (the seats certainly look bright and were comfy) as well as “new state-of-the-art” wireless charging facilities on both tables and seatbacks (sadly my phone is bog standard wired charged only) and they’re on the “premium” Glasgow Airport Express (it’s certainly not cheap) and will double the capacity on these “popular” services (now that is true, I’ve always found the buses busy, even with standing passengers on the erstwhile single decks on previous journeys).

Mark Johnston, Glasgow Airport’s Managing Director showed he was also on message with more superlatives including raving about the double deckers: “I’m sure our passengers who choose to sit in the upper deck level will also appreciate the elevated views these new models bring”.

He’s right, of course, you do get wonderfully elevated views, and why I’m a great advocate of double decks; mind you, it might have been better not to have plastered the graphics over the glass to annoyingly interfere with those elevated views from certain seats.

There was a time when First Bus and Arriva (when they still ran in Scotland) competed on the Airport run to the city centre, but for some years now it’s just First Bus which greets you with its tented covered bus stand right outside the exit of the main terminal building. One of the most convenient bus boarding points I’ve ever found at a British airport.

A day return ticket on the Airport Express isn’t cheap at £12 (that’s on the First Bus App; it’s £13 from the driver with singles at £8 App and £8.50 driver) but I suspect Glasgow Airport takes a fair cut of that in departure charges. 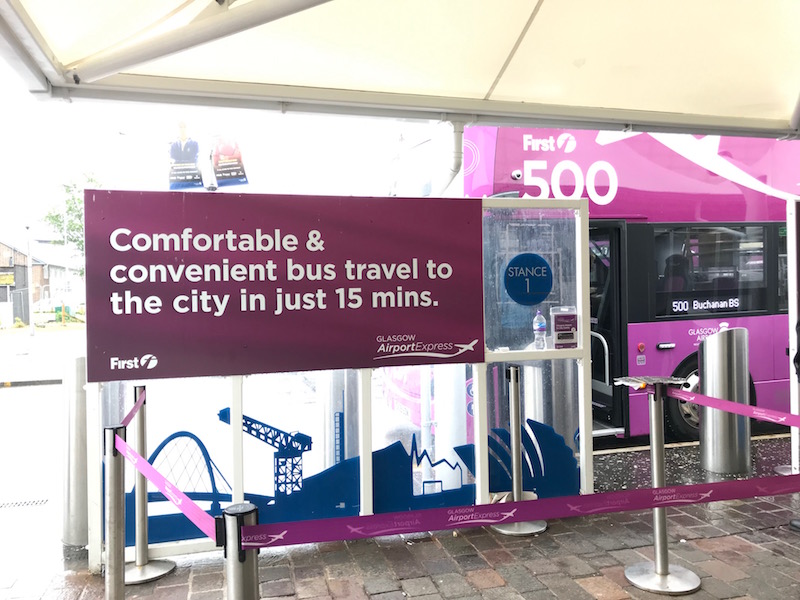 This time I began my return journey at the city centre end of the route so coming out of Central Station I went in search of a bus stop. It didn’t take long to find one in nearby St Vincent Street (I already knew the answer), but I reckon some prominent signs at the station exit might be helpful for transiting passengers unaware of where to catch the airport bus.

An Airport Express 500 was due at 17:50 and I got to the bus stop a few minutes before. The service is advertised as running “from every 10 minutes” and with a journey time of fifteen minutes. 17:50 from a busy Glasgow city centre is probably not the best time to try out the timekeeping promise of a service and indeed no bus arrived until just after 18:05.

At the next stop another bus passed us meaning peak hour bunching; once we hit the motorway a stretch of slow moving traffic meant the journey time was inevitable extended to nearer twenty-five minutes.

Perhaps a more realistic journey time for peak journeys needs advertising for the reassurance of flying passengers who cut things fine, although the small print in the leaflet does explain “Airport – city in just 15 mins*” is “*To Bothwell Street (off peak)”.

The leaflet also explains “Service 500 features luxury seating, tables with wireless charging, luggage storage, USB charging at every seat and free 4G WiFi”. The buses live up to that promise and are a great improvement on the single decks.

My journey was impressively busy perhaps reflecting the headway gap and it was noticeable the bus that passed us was pretty much empty but helped out at the next stop allowing us to pass without stopping and head off to the motorway and airport.

My only disappointment was the “state of the art contactless enabled” ticket machine didn’t like reading my day return ticket QR code from the App on my smartphone; making an off putting beep and red light, but the driver reassured me it was a software issue preventing the machines reading day tickets.

There’s an extensive luggage rack on the lower deck and a monitor on the upper deck which on one journey simply played out a graphic of the Airport Express logo, but on my second journey also included some promotional messages which I couldnt make out from a distance. I really don’t know why bus companies bother with these things.

As I got off at the airport I noticed some “slightly revised” timings had been introduced three weeks ago which no doubt regular passengers were pleased to be advised about but probably went over the heads of the majority of occasional passengers for a “buses from every 10 minutes” service.

….and the centre protrusion on the back seat of these buses (an odd Alexander Dennis characteristic) has also been usefully labelled as a handy place for carry-on baggage rather than being mistaken for an uncomfortable child seat!

After a wait at Glasgow Airport I caught a bus back at 1855 and with a clear run this really did take just 15 minutes to Bothwell Street close by Glasgow Central Station. That was impressive. There are aspirations for a fancy rail based link to the Airport in some quarters; with a high frequency bus route taking just 15 minutes this would be a complete waste of money.

With these new excellent buses from First Bus, a nice bus lane on the M8 into and out of the city centre is all that’s needed now. Job done.