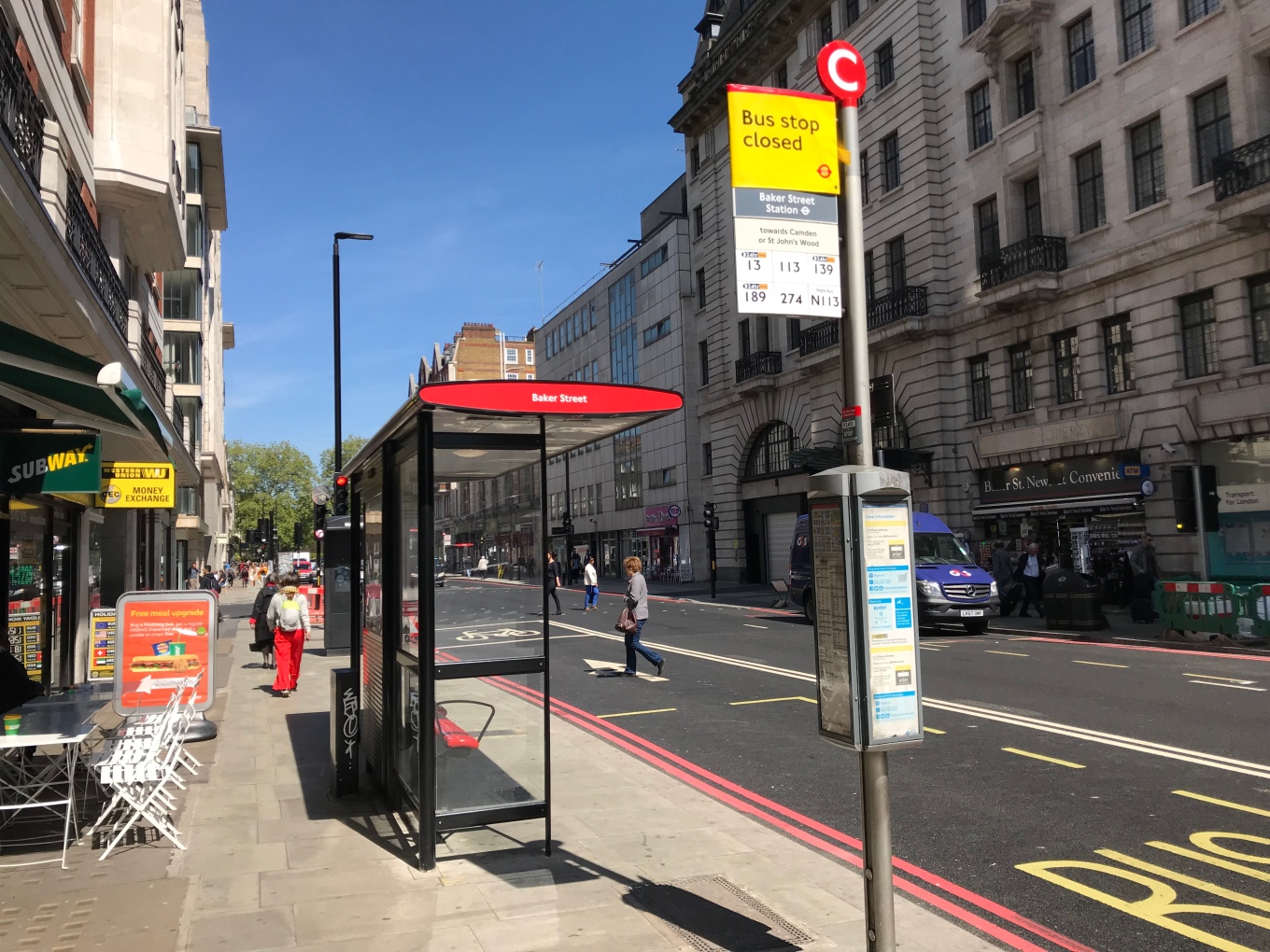 ‘Winding your way down on Baker Street’ the late great Gerry Rafferty sang; and since February, if he’d still been with us, he would be able to wind his way back up it once again. The road (and nearby parallel running Gloucester Place) has changed back to two-way traffic including an all important northbound bus, taxi and cycle lane through the Marylebone Road junction.

Despite the new arrangements settling down well, I heard the changeover had initially been a bit of a hiatus so took a look yesterday to see what was happening. 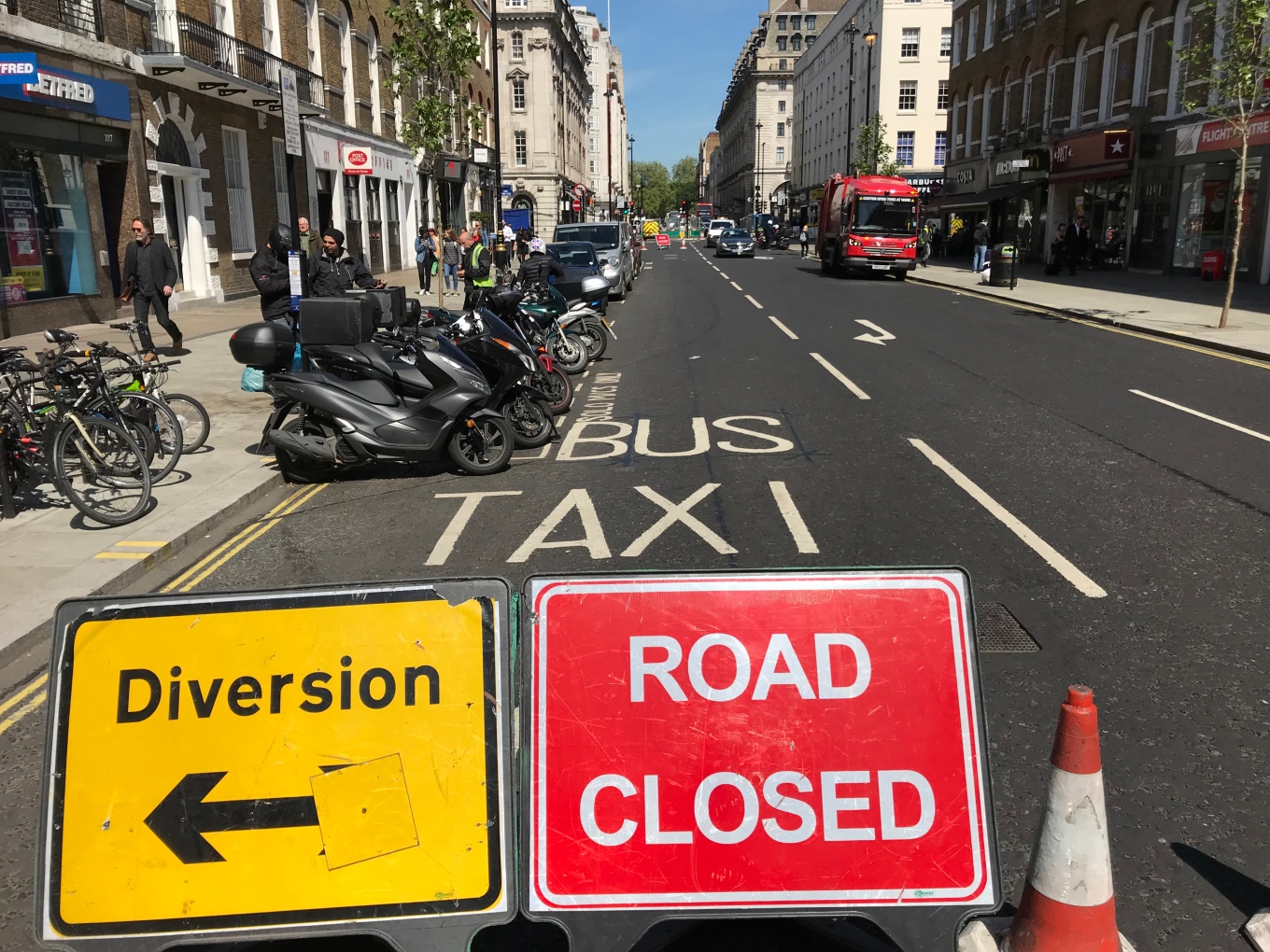 As Gerry sang, it turned out to be ‘another crazy day’ on Baker Street as first thing I spotted was the newly completed bus lane was blocked at the northern approach to Marylebone Road.

It turns out three months after the switchover, the enhancement works are not complete and an improved central island at the junction has been constructed for pedestrians to cross.

This is unfortunate as everyone had just got used to the new bus routes and stopping arrangements and now everything’s in turmoil again. 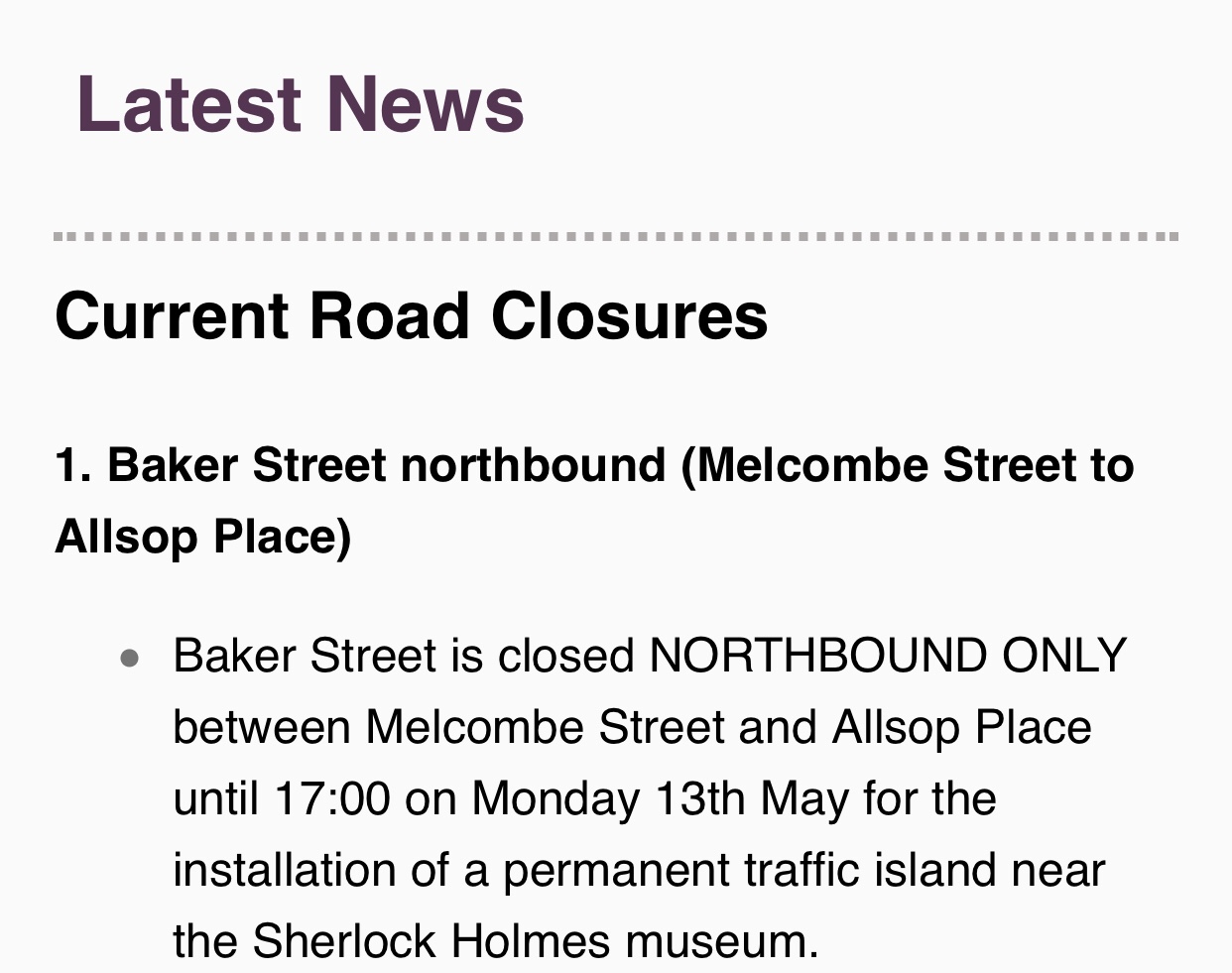 The island work was scheduled to be completed on Monday afternoon and it looked to me as though it was nicely finished,….. 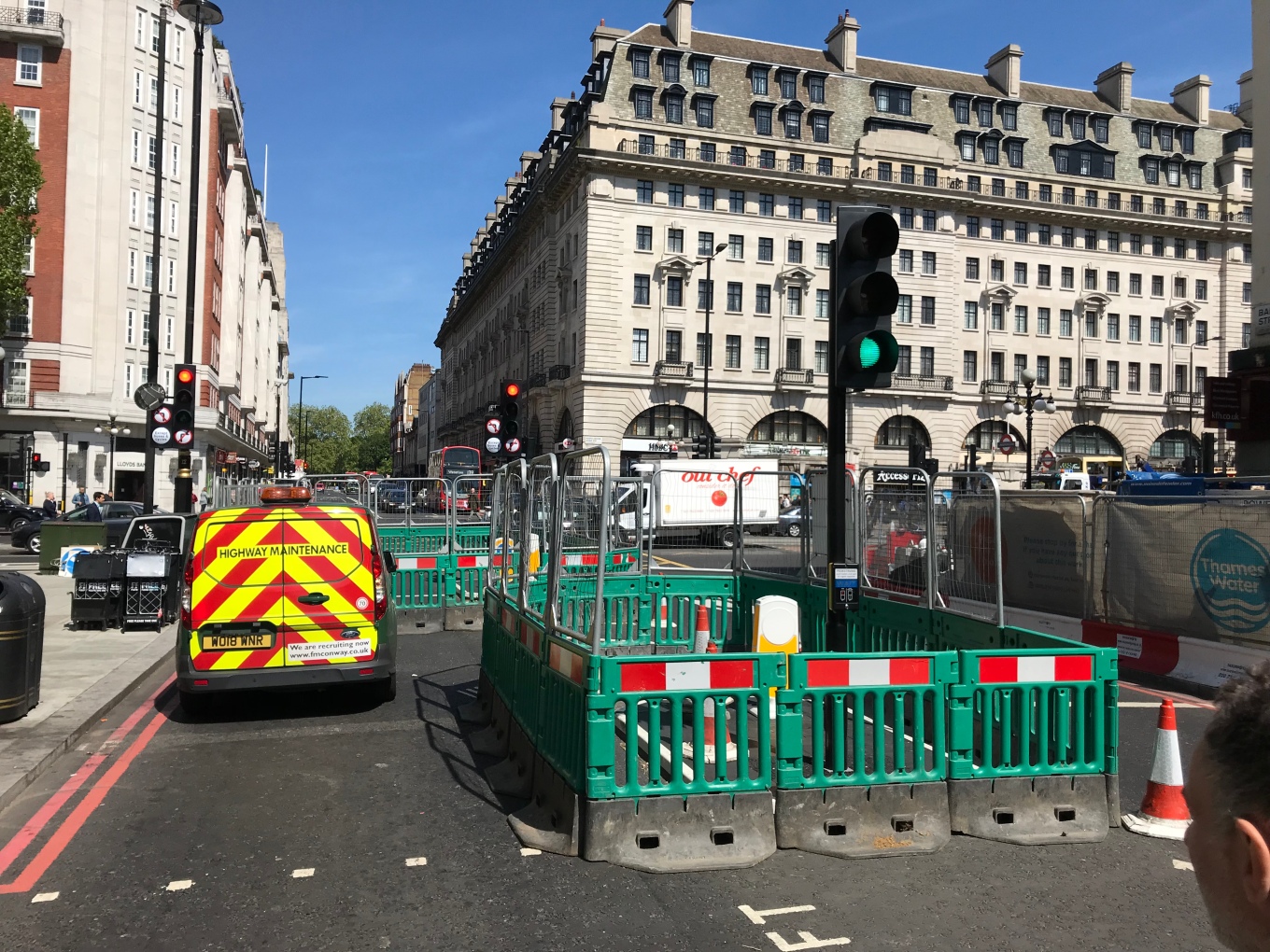 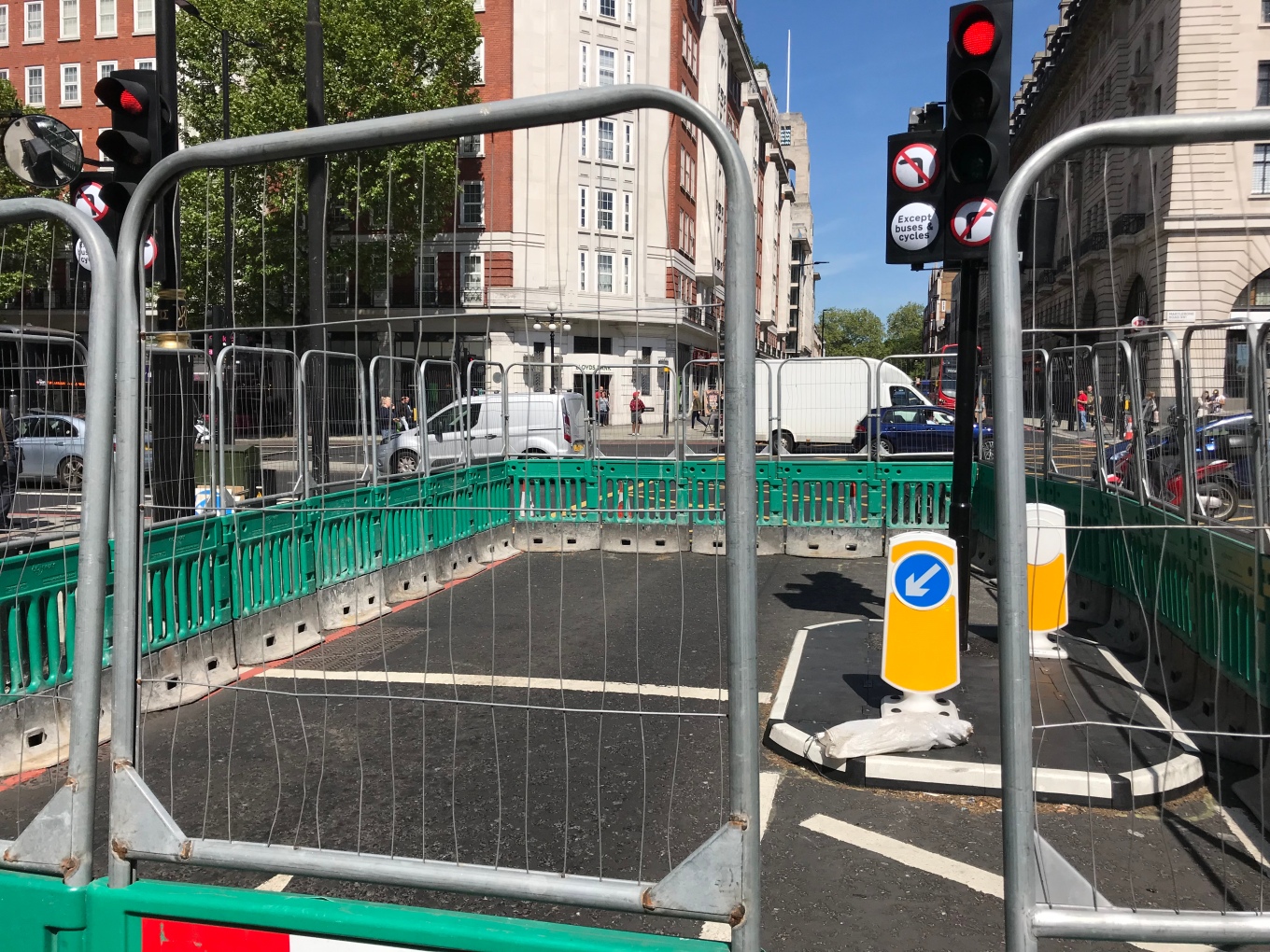 ….. except no one had removed the barriers so buses had to continue on a slow crawling diversion causing unnecessary delays …… 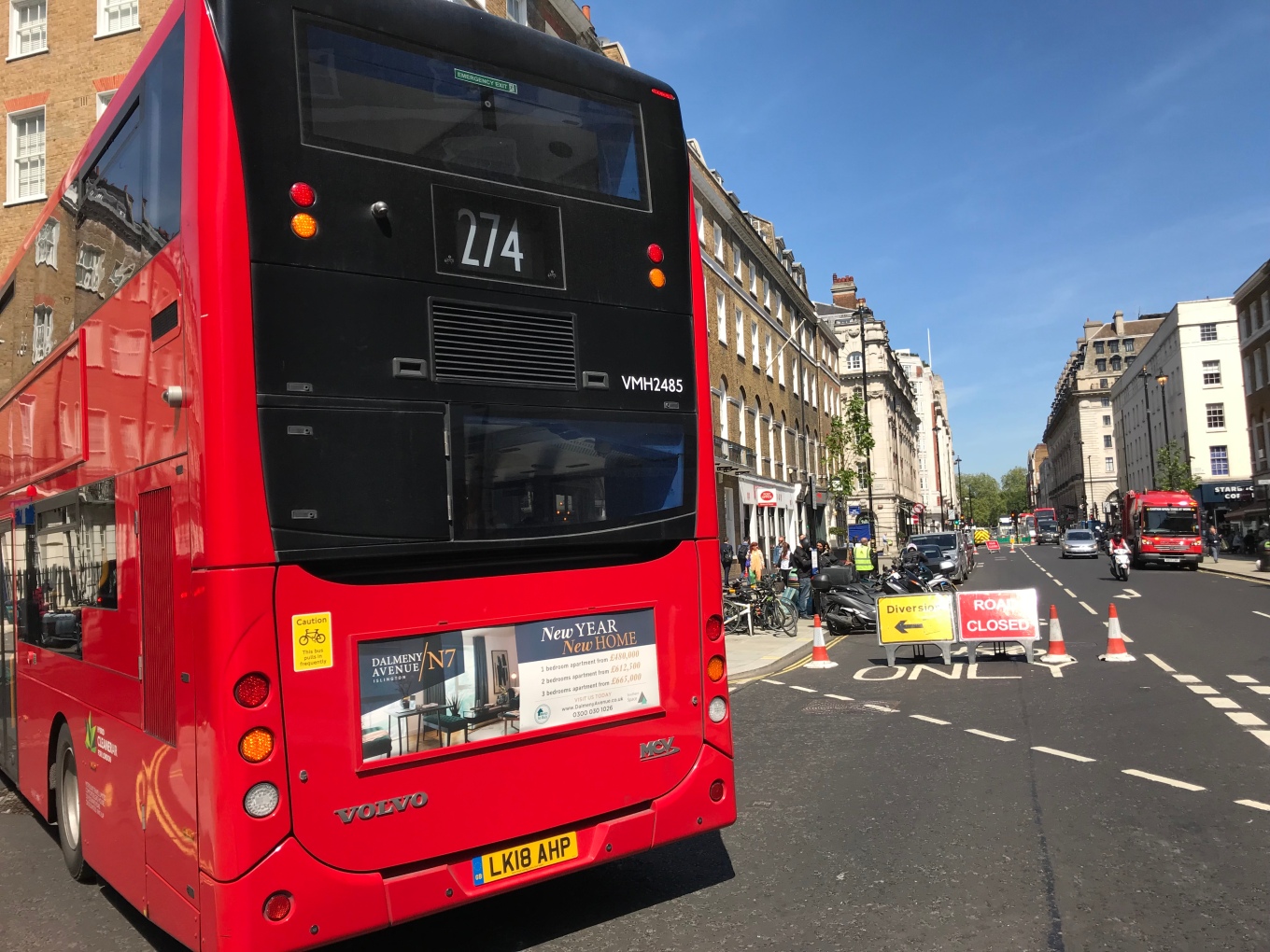 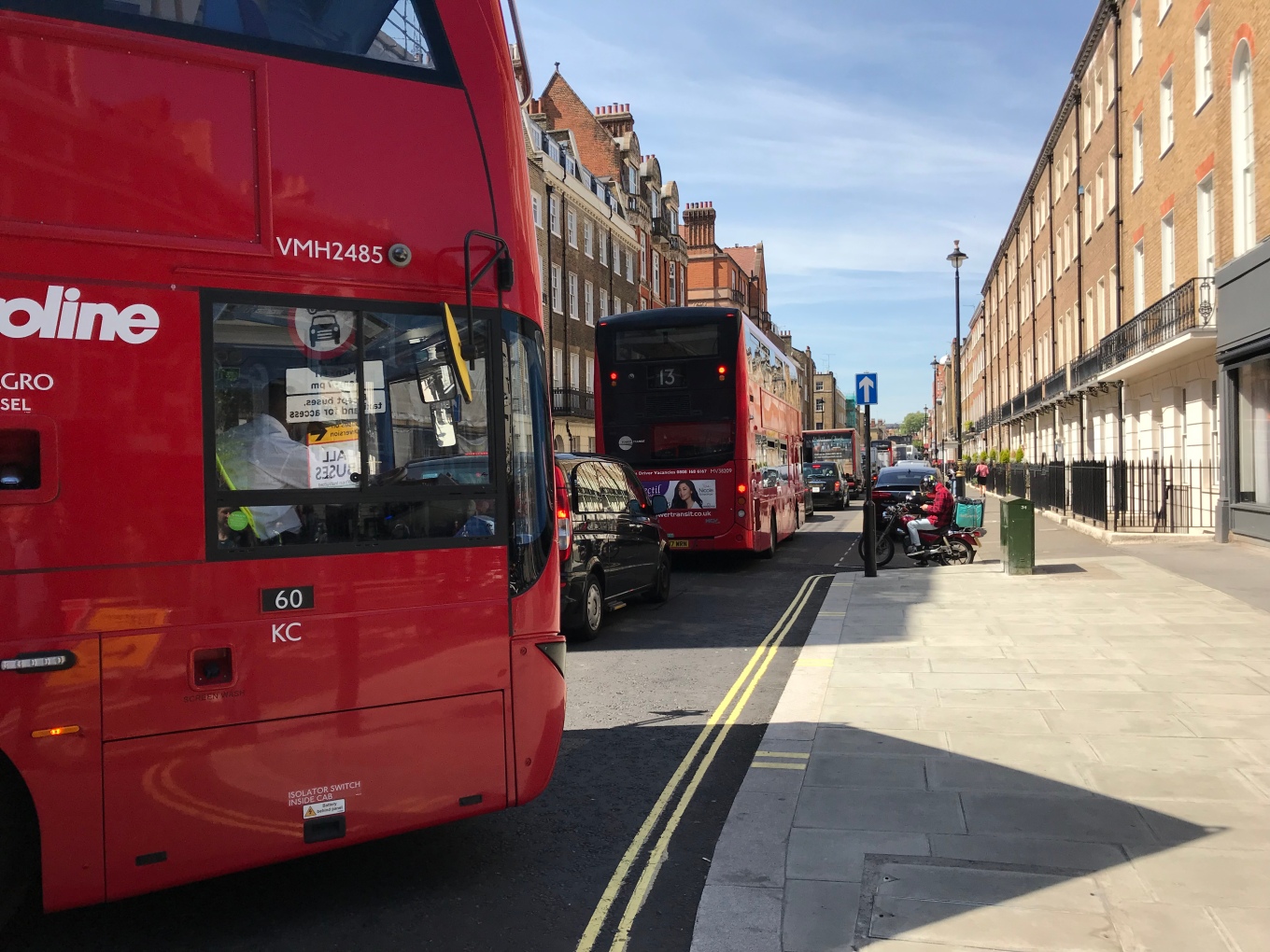 …… and passengers were left wandering around the neighbourhood searching for an alternative bus stop. 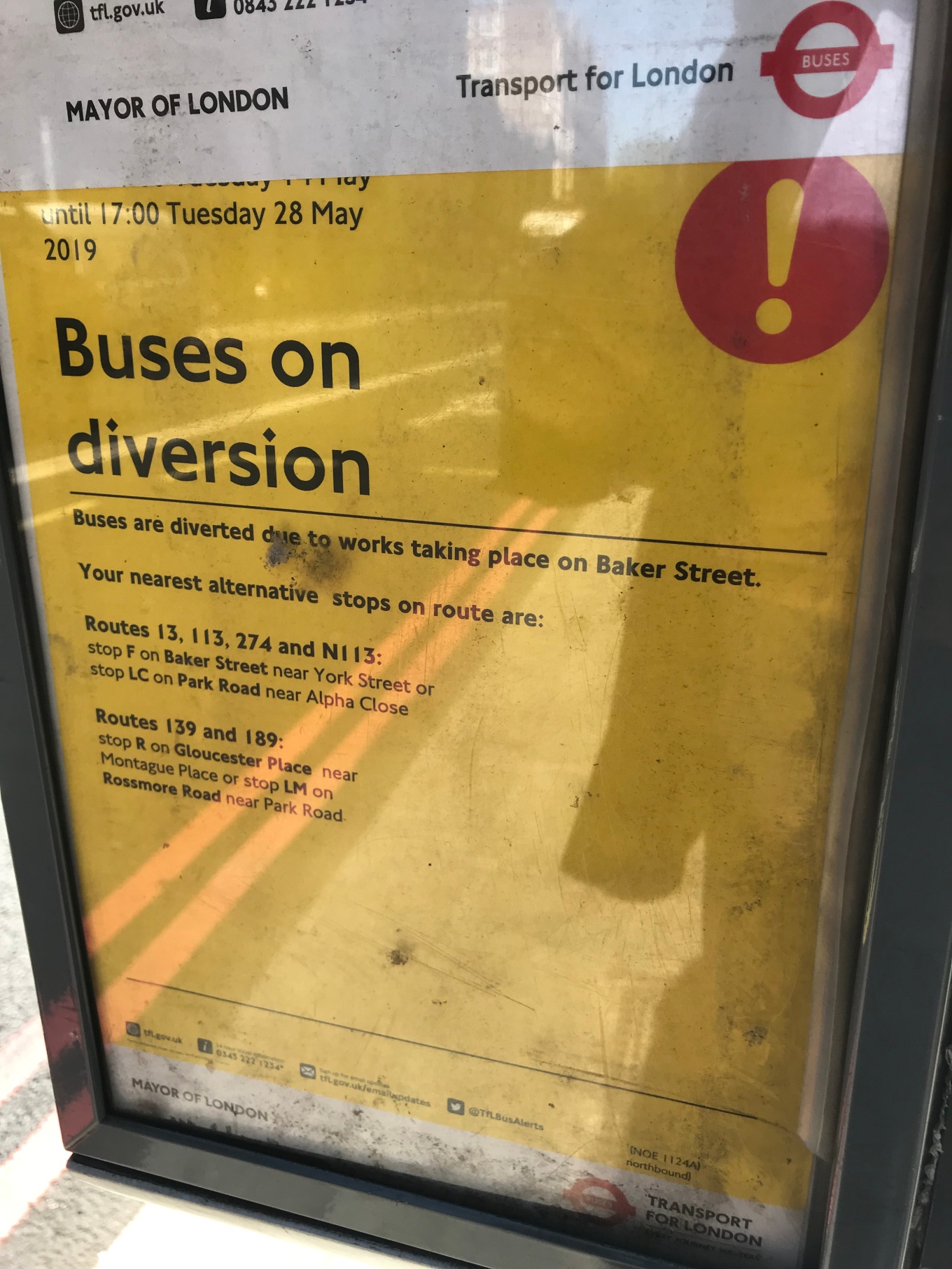 No wonder passengers are deserting London’s buses in droves. Two of the alternative bus stops weren’t shown on the closed bus stop panel map, nor is the brand new bus stop north of Marylebone Road shown and where the notice was posted causing much disorientation ….. 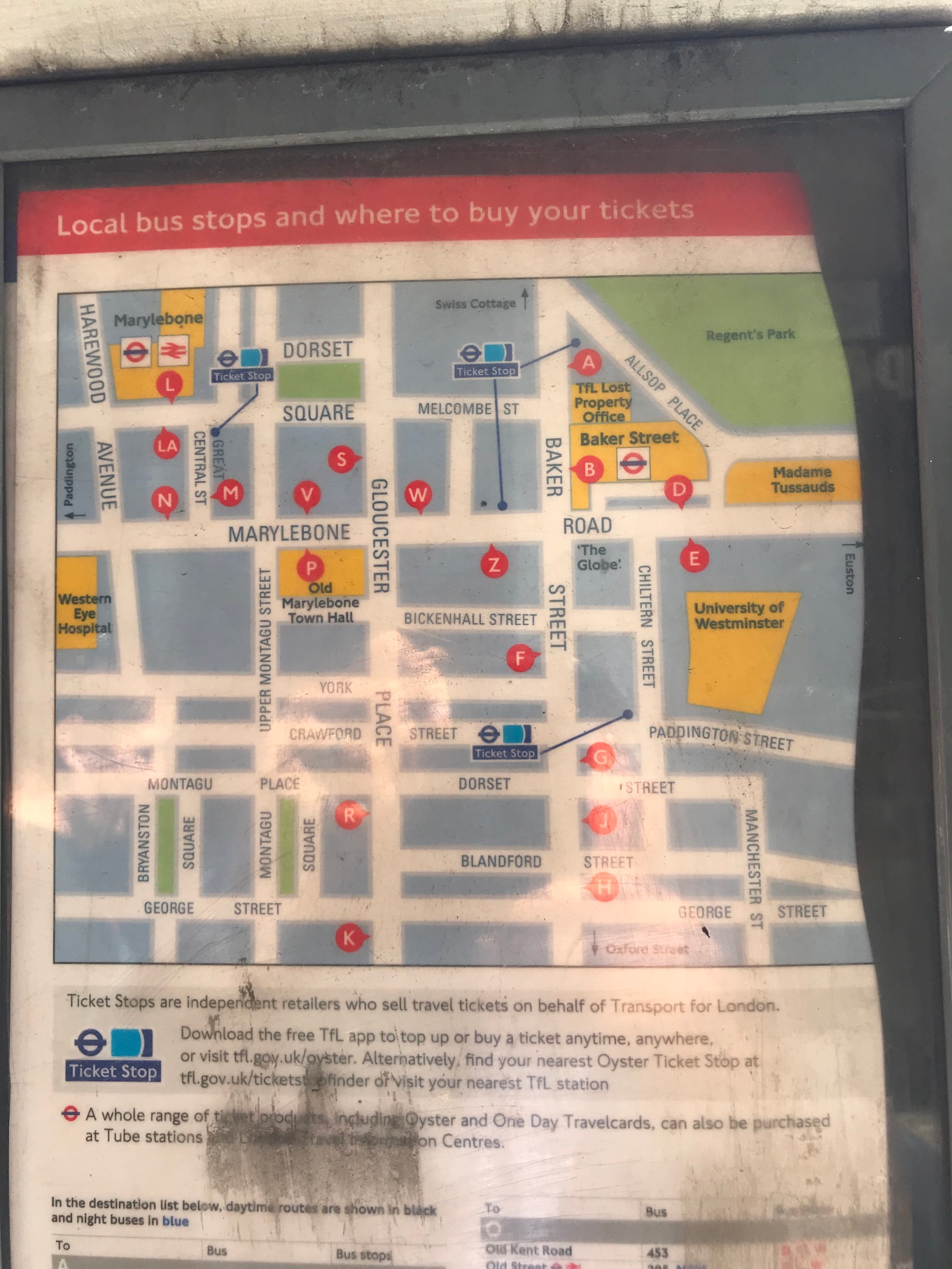 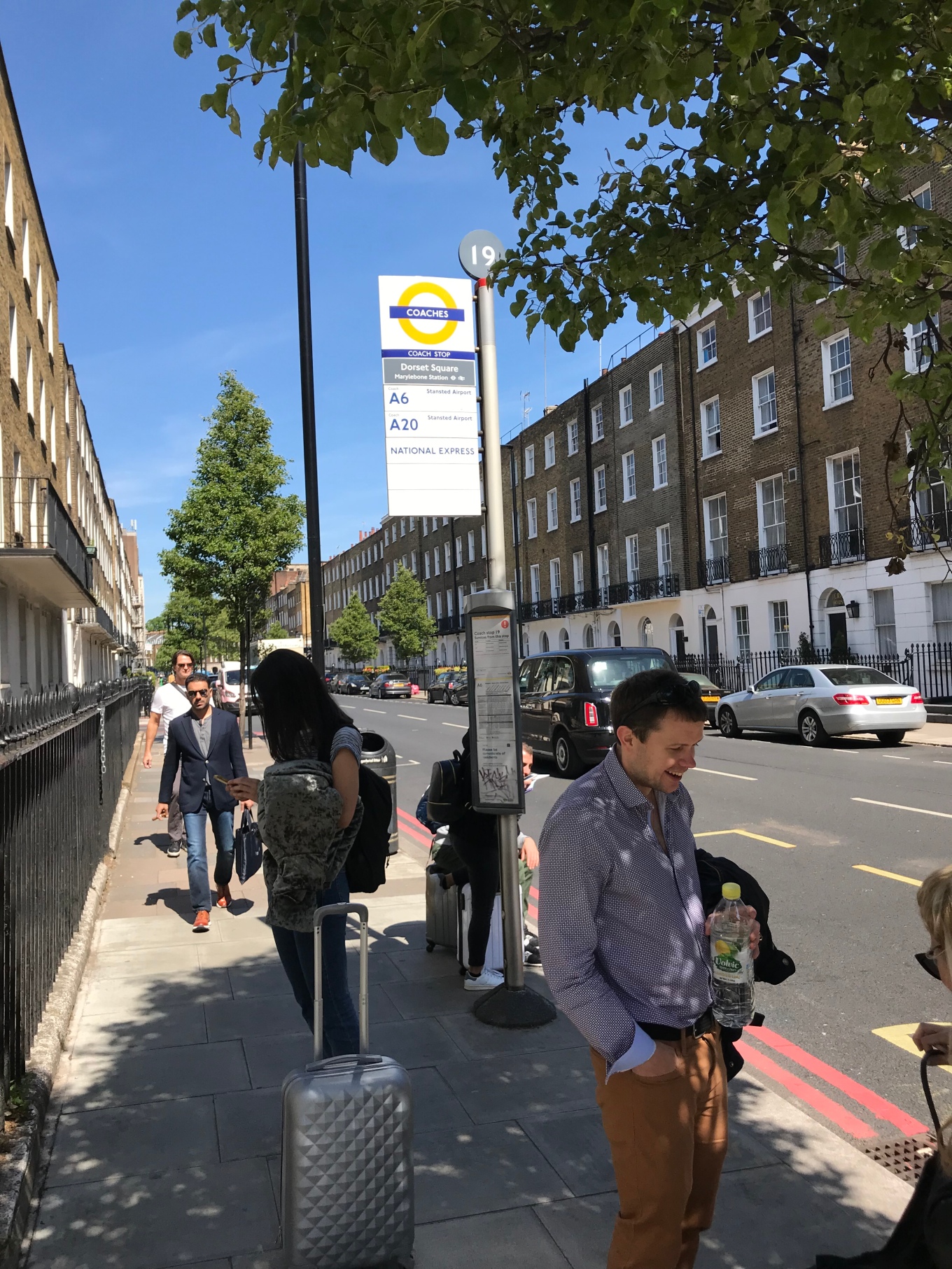 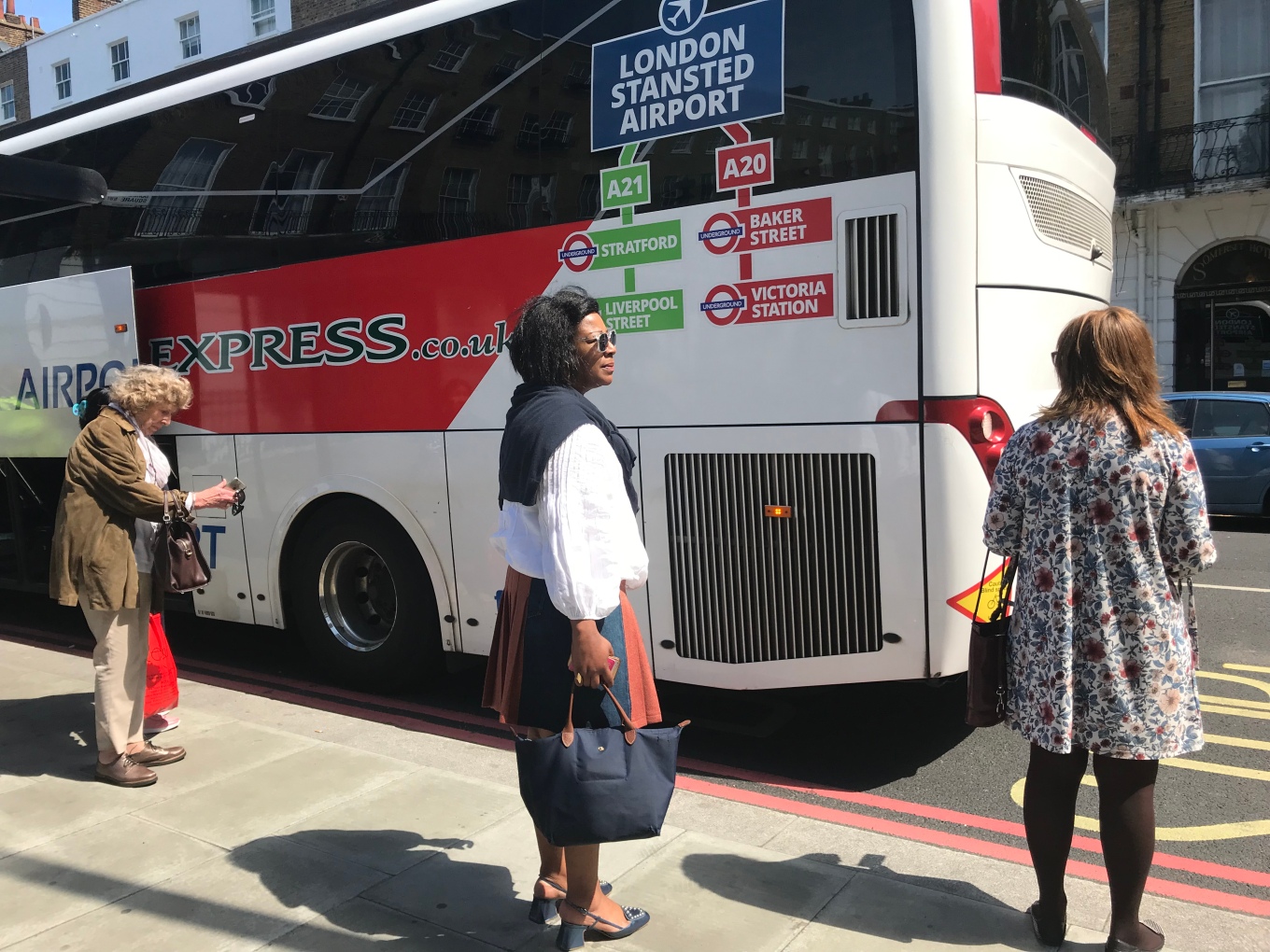 …….and just to add to the confusion occasionally a TfL bus driver took pity on the hand waving passengers and stopped while others sped by. 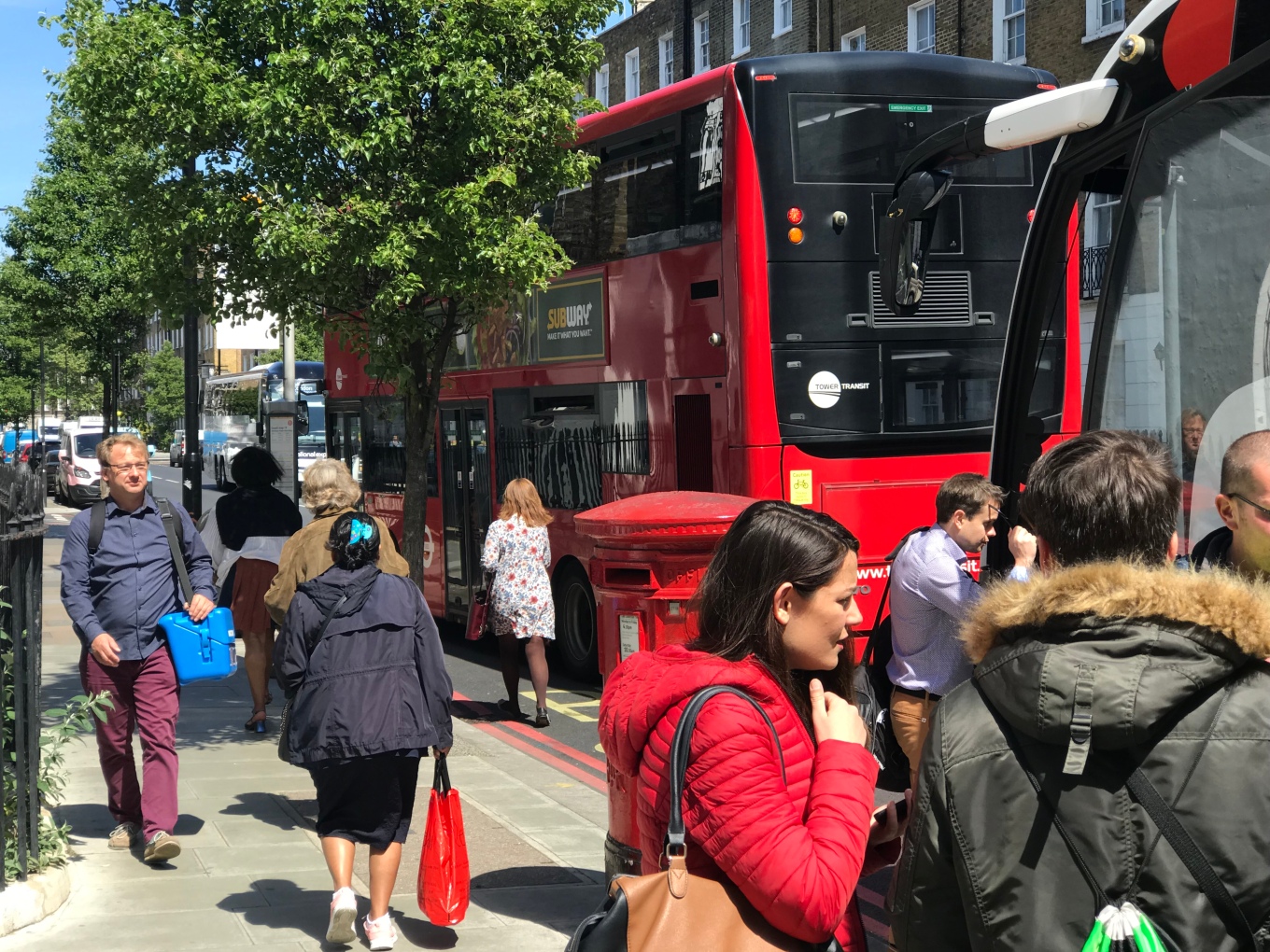 The street furniture in some locations looked a little odd; such as here where the southbound stop pole and flag by Baker Street’s famous Lost Property shop seems to have got detached from its shelter by some distance!

It wasn’t very encouraging but hopefully those barriers were swept away just after my visit and all is now back to the new normal.

Meanwhile over at Tottenham Court Road another two way scheme with a new southbound bus and cycle lane has just been introduced. 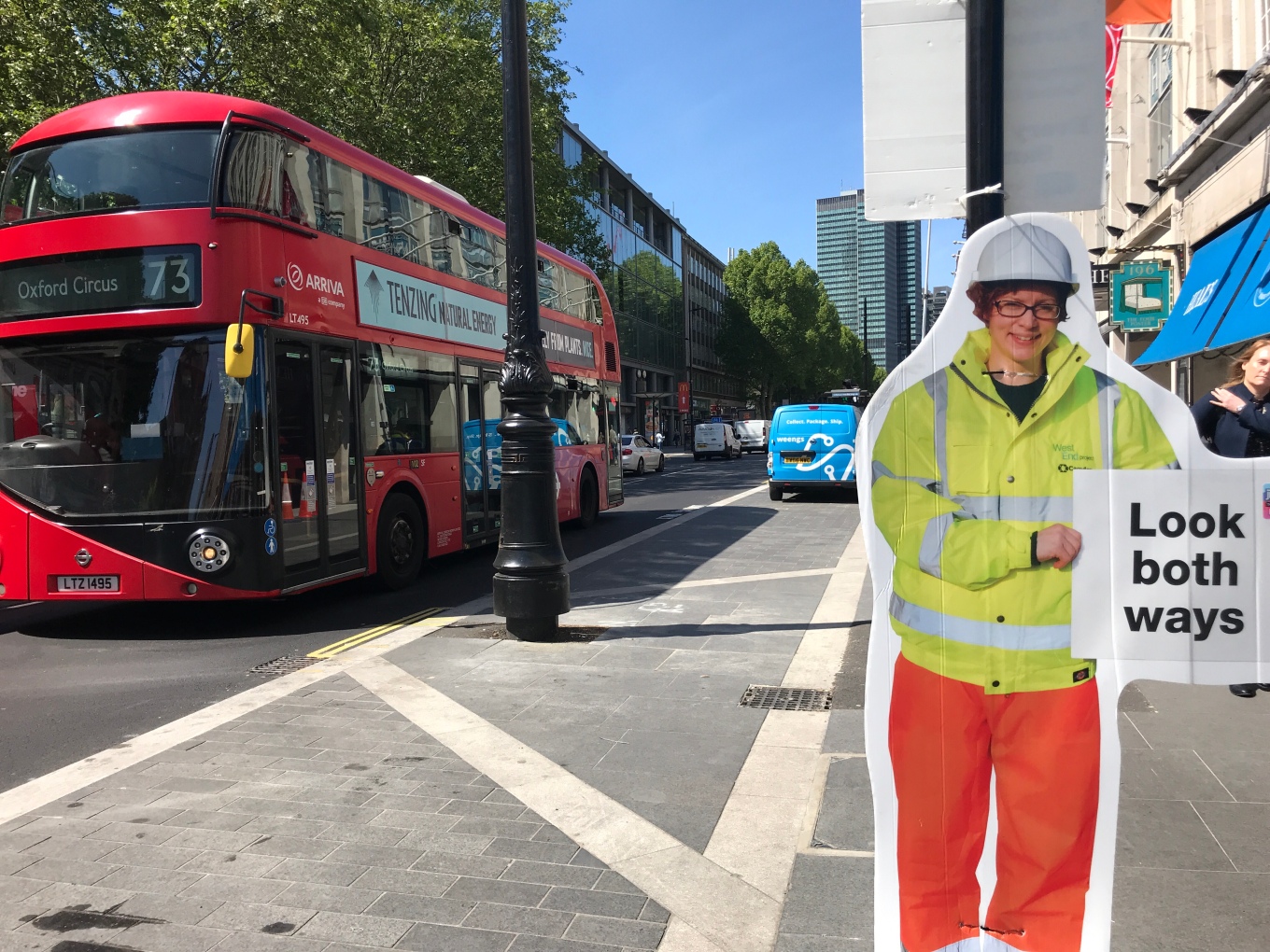 It was great to see buses having a lovely clear southbound run and saving valuable time that used to be lost in the horrendous congestion at the bottom of Gower Street. 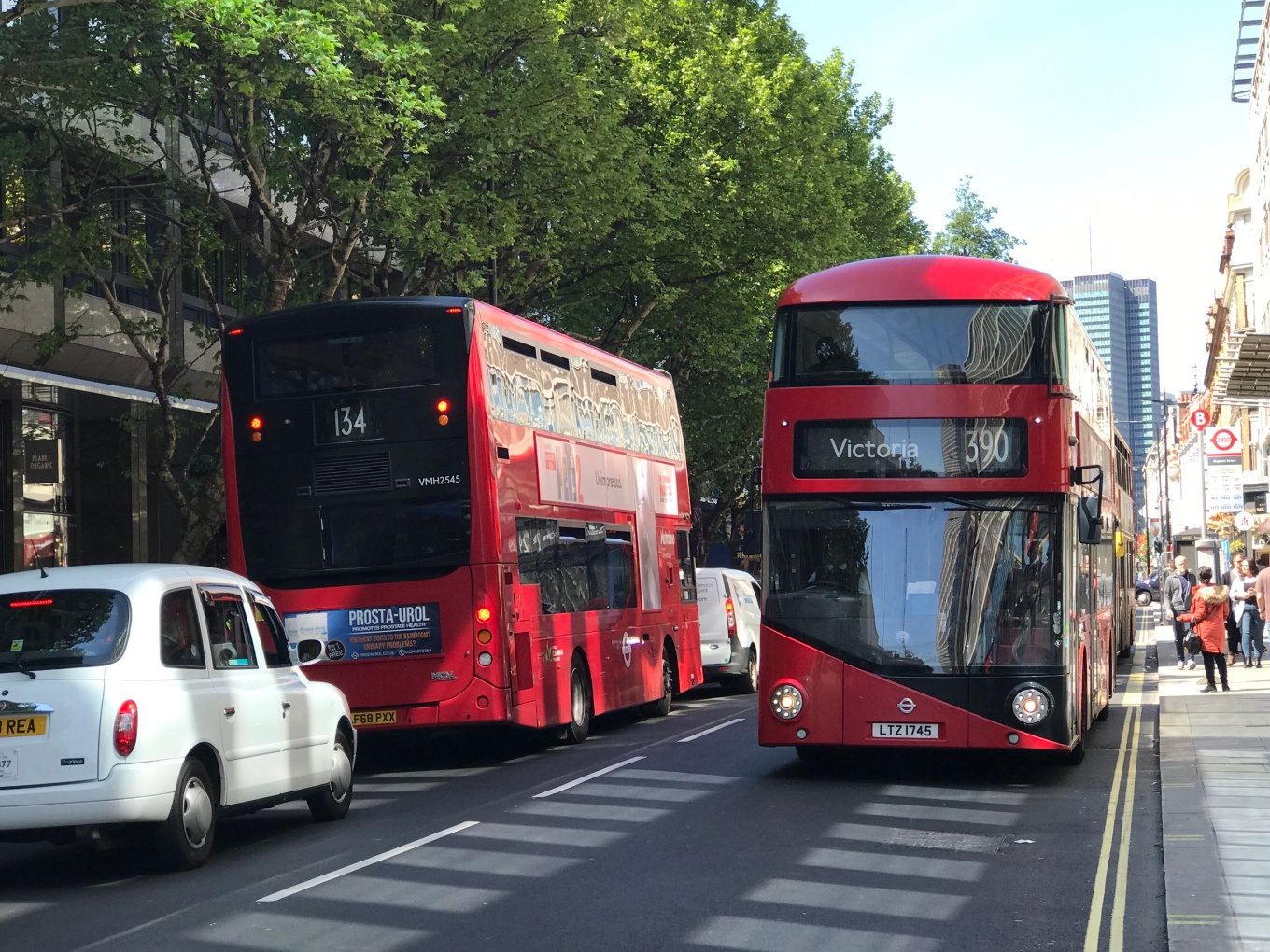 Some delays were evident at the junction with Oxford Street for right turning buses on the 73 and 390 (just one bus getting through each green phase) but southbound buses on the 14, 24 and 29 were gliding through, when able, with 134 buses easily turning left to their newly located terminal stand; all making for a refreshing change for central London buses. 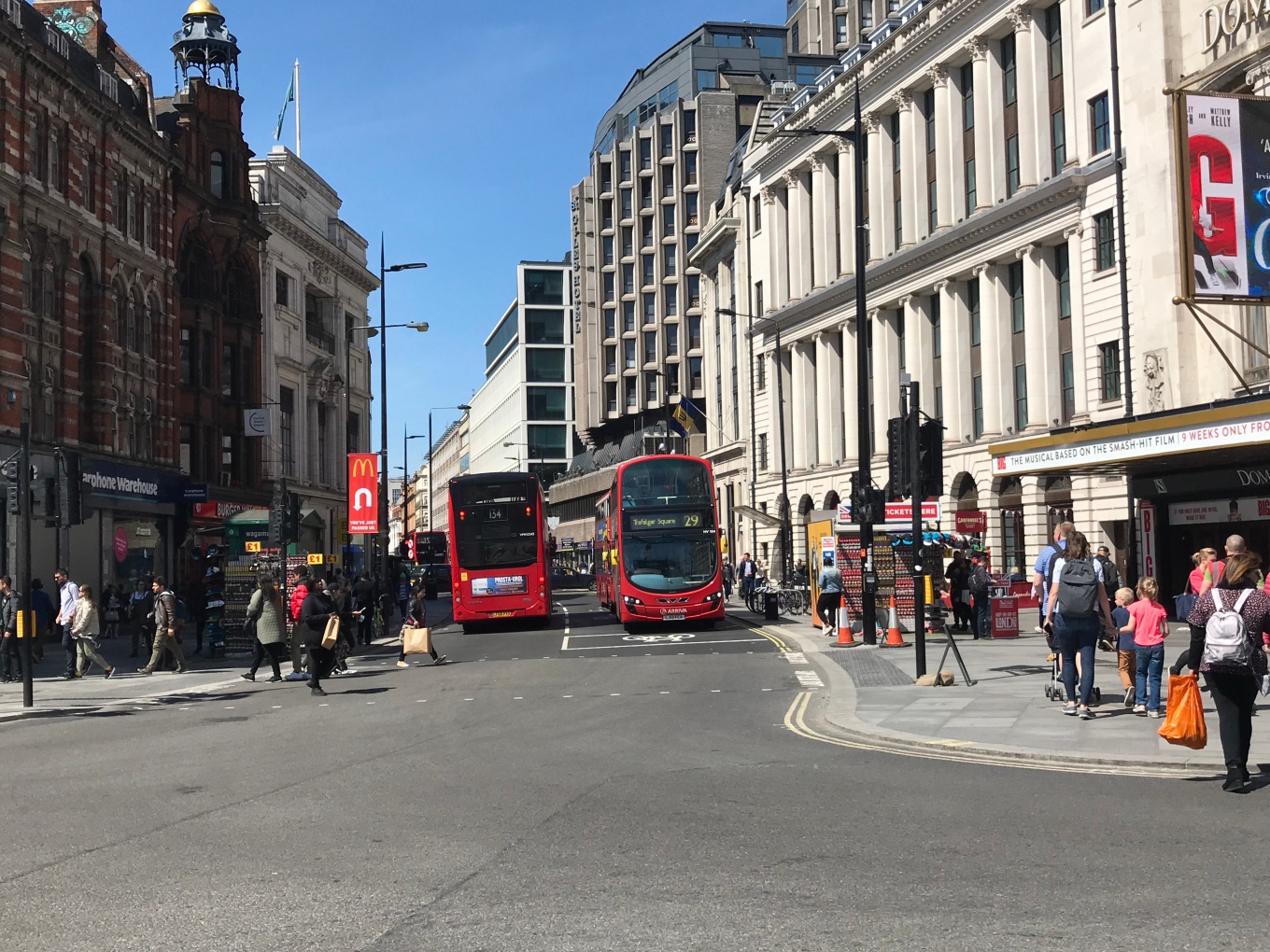 Northbound traffic on the now restricted one lane Tottenham Court Road however was barely moving. Indeed I walked the full length from the Oxford Street junction to Warren Street in the same time it was taking buses in more typical contemporary central London traffic conditions. 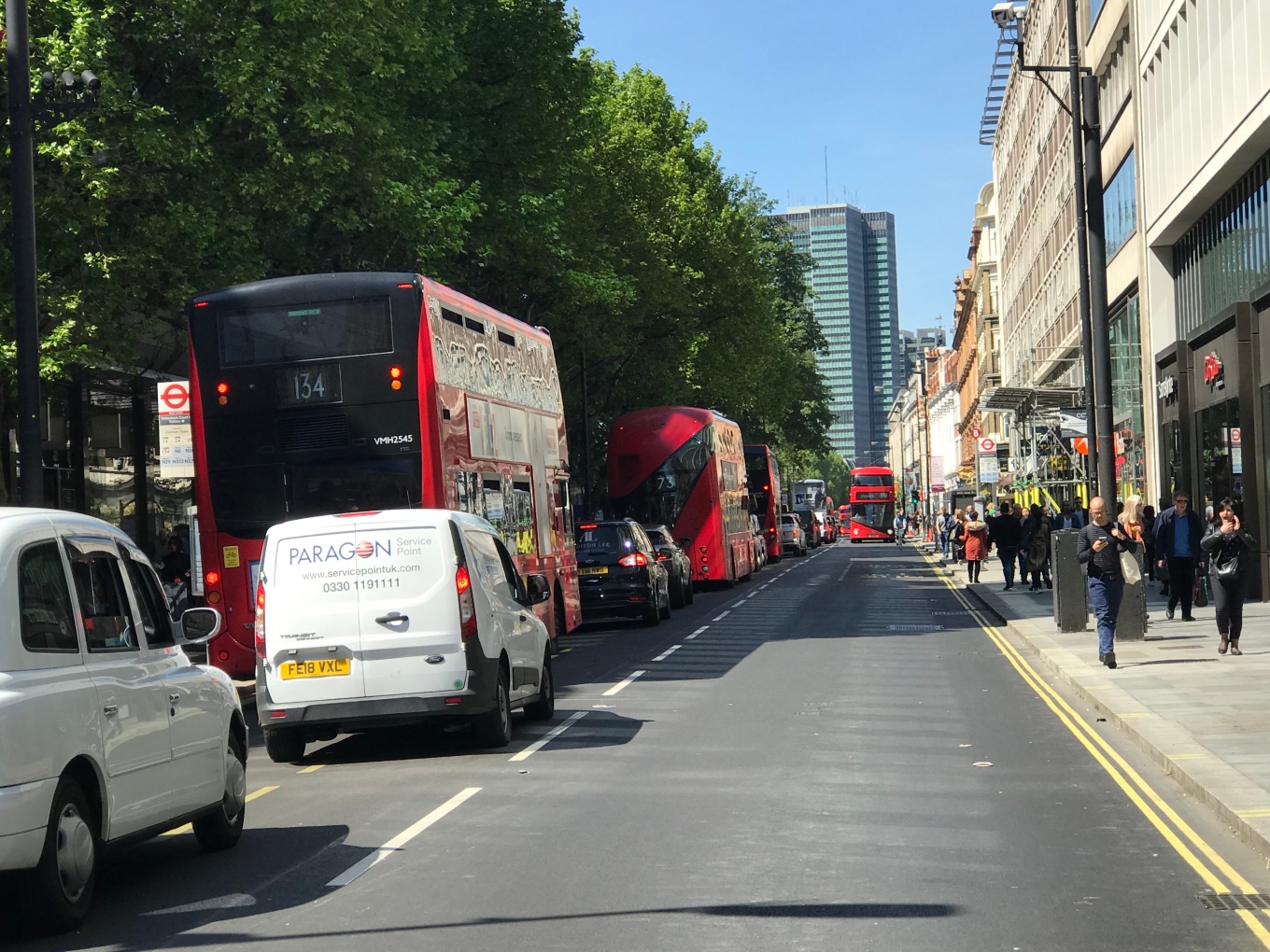 However Camden Council have plans next year to shift northbound general traffic into a new two-way Gower Street (running parallel to the east) leaving Tottenham Court Road pretty much exclusively to buses and cycles only. And that really will be impressive.

This scheme is proving controversial by excluding taxis but for me this and the new look Baker Street are very much welcome changes, once properly completed and those barriers and cones are all swept away, because at last buses are being given decent priority road space (along with cycles) in London 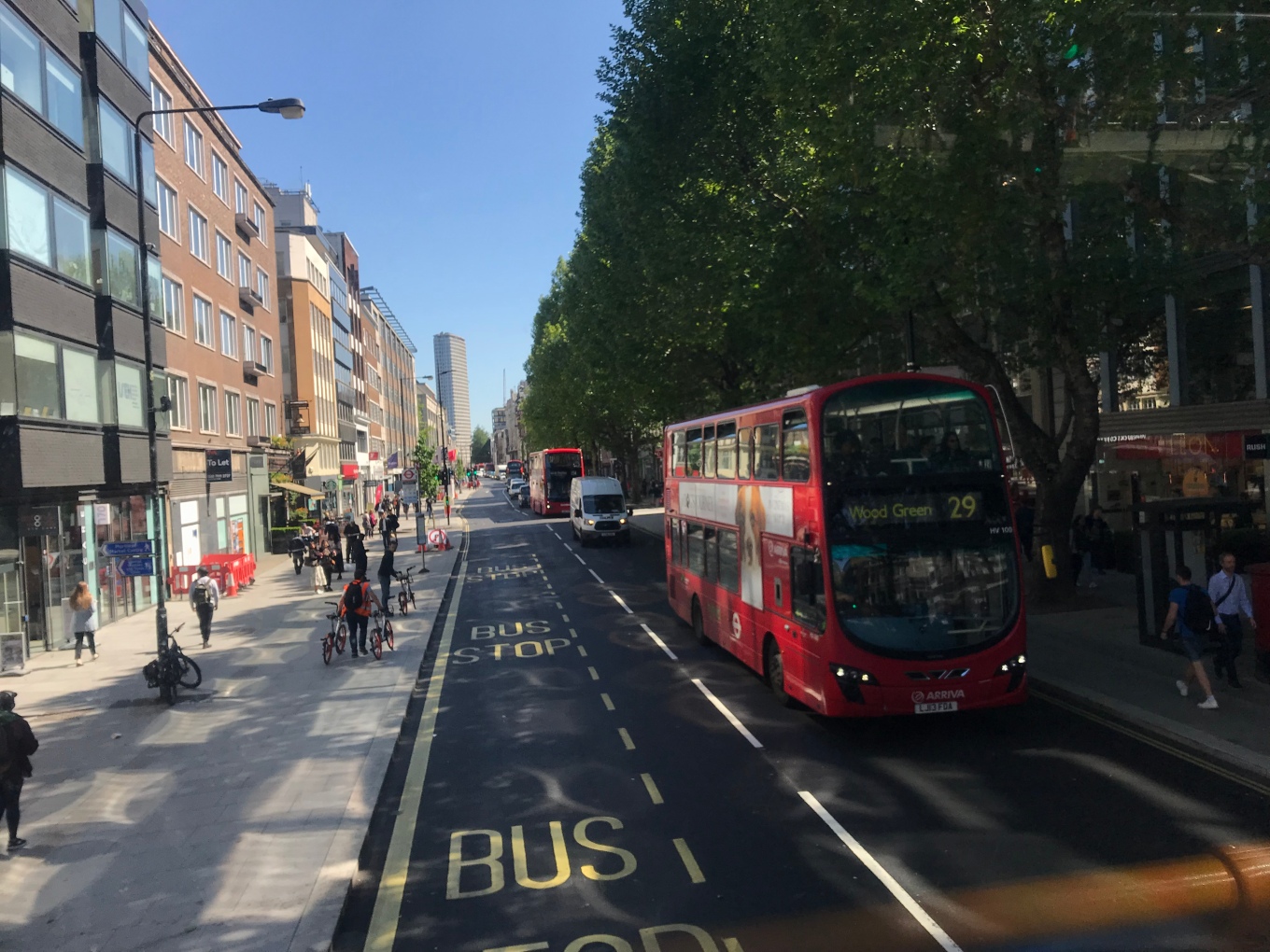 2 thoughts on “Gerry wouldn’t be impressed” Leave a comment ›