They’re Alexander Dennis Enviro400XLB bodies on a Volvo chassis (according to the swanky promotional video which plays out every five minutes or so on two of the four on board TV screens – a pair on each deck). I think most passengers were just impressed they were smart new buses with lots of seats to travel on, rather than a manufacturer’s techy sounding bus model name check!

They’re not all out in service yet – it takes a while to commission 42 new buses (although thankfully not as long as commissioning new trains), as I found out first thing this morning when four consecutive older buses turned up in Princes Street between 0650 and 0735 on route 11. 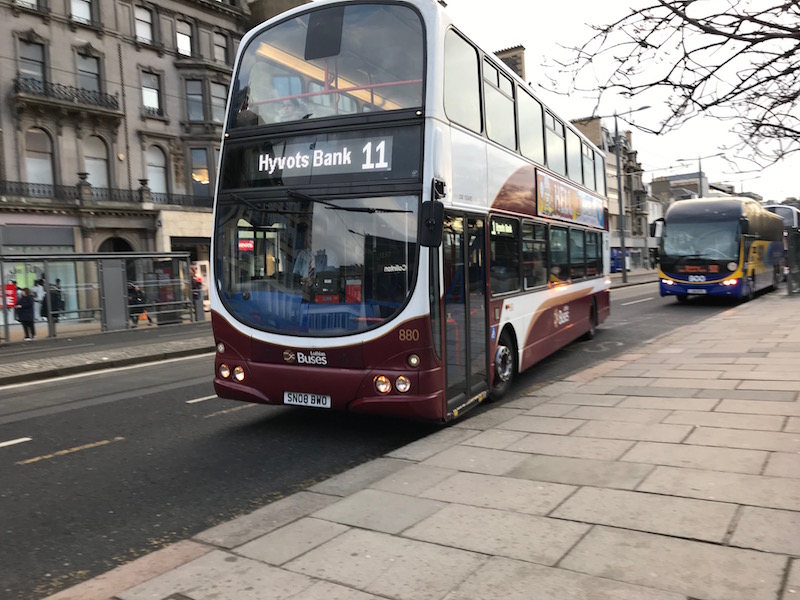 My patience paid off though as one of the gleaming new jumbo sized buses eventually arrived and I began my first trip to route 11’s southern terminus at Hyvots Bank. About fifteen passengers had spread themselves out on both decks, which wasn’t hard as there really is a lot of room, both upstairs and down to spread out in.

The seats are very comfortable with ample leg room throughout.

The two front offside seats upstairs has particularly generous legroom, as does the nearside seat over the first set of rear wheels. 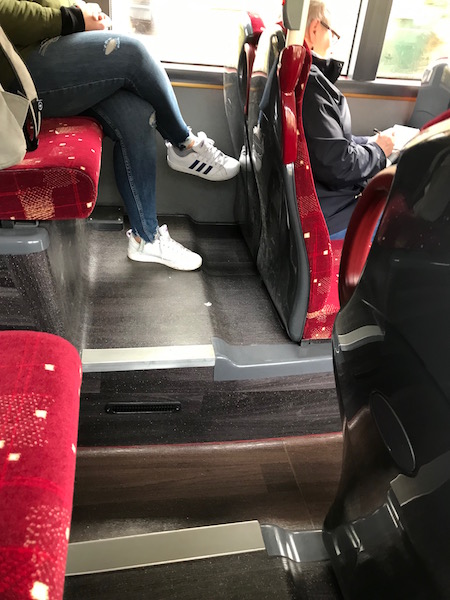 Being a tri-axle there’s a longer than usual wheel arch giving a double set of backward facing seats. 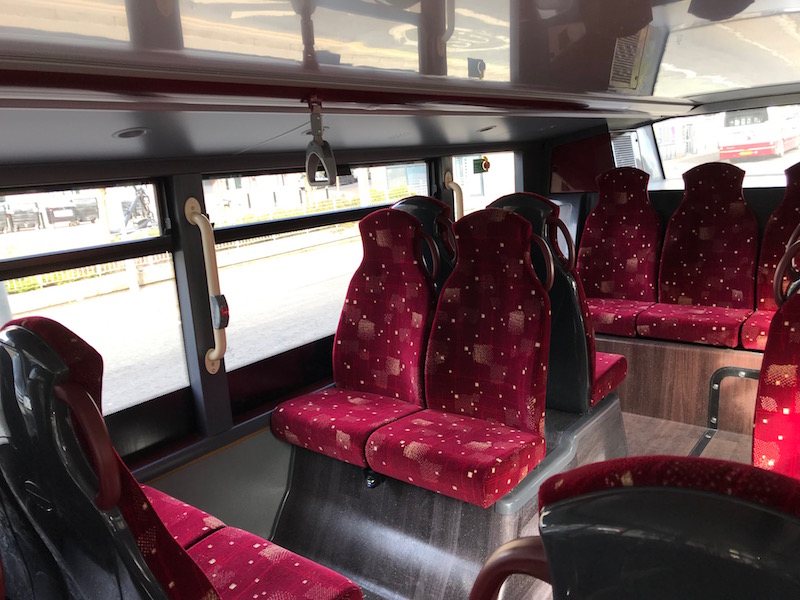 Some bus companies are now eliminating rear facing seats and replacing them with other novelties like a reading shelf. This also helps deter feet-on-seat syndrome. But here the name of the game is to maximise seating capacity.

Obviously there are the usual usb charging plugs and Wi-fi is available. There’s also some nice mood red strip lighting around the bus (see photos above and below) and smart spot lights making for a particularly inviting ambiance at night.

Strangely for a bus with a lot of room there’s only a single ‘three tip-up’ sized space for a wheelchair or a buggy. 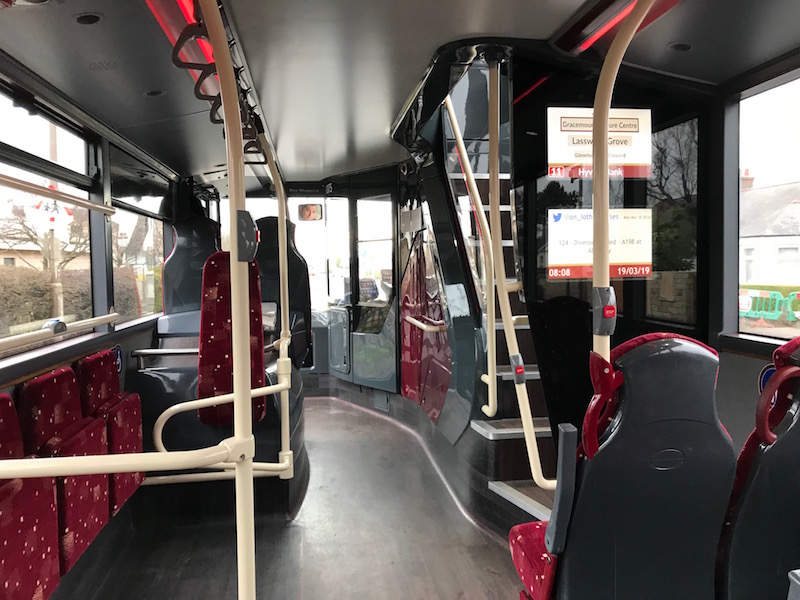 On one journey a passenger using a wheelchair boarded which meant no buggies could be carried and on another a buggy soon occupied the space with a second having to be folded.

Some bus companies are now installing two wheelchair spaces which has the benefit of increasing the chances for buggy owners to travel easily too.

The buses are double doored and the already mentioned on board video explains that passengers should exit through the rear door and an on-board warning announcement plays out every time they close.

The pairs of screen monitors are behind the staircase facing the rear on the lower deck and at the top of the front window on the upper deck, sadly restricting the forward view a touch for front gangway seat passengers. 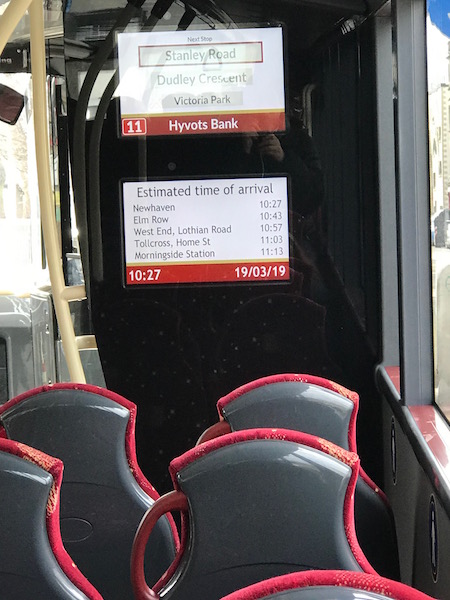 I’m not a great fan of screens inside buses, and certainly not two of them in pairs. I just think it’s way over the top leading to information overload. On the positive side the left hand screen (upstairs) and top screen (downstairs) show very clearly and helpfully the next three bus stops (the next one being announced too) and every so often within a display cycle the right hand screen (upstairs) and lower screen (downstairs) shows the expected arrival time at key points further along the route which is an excellent idea – a similar display in the Airlink buses to Edinburgh Airport helpfully gives up to date flight departures (and I know other bus companies are following Reading’s lead in showing train departures too).

This is all good stuff but I reckon the same effective content can be achieved by cycling through displays on just the one screen rather than having two.

All the more so as the rest of the display cycle comprises PR messages about how many tonnes of carbon are being saved or videos about using apps to sync with friends so they’ll get a text message to know just when your bus is arriving. 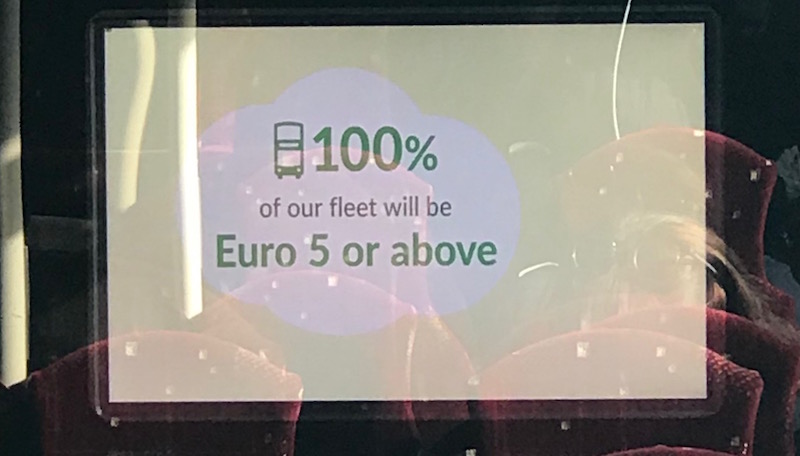 I’m not convinced passengers are avidly watching these things and indeed on a busy bus if you’re sitting towards the middle or rear you can’t make out the screens anyway.

Funnily enough despite all the gizmos there wasn’t any information displayed about the temporary arrangements at the northern terminus of the route – at the busy tourist spot of Ocean Terminal, where the normal terminal bus stops had been suspended.

My journey down to Hyvots Bank was ‘against the flow’ of commuters and scholars heading into the city centre so was fairly lightly loaded but it gave me a chance to spot buses on route 11 heading towards the city and I was highly impressed at seeing busy buses which kept on passing by with very few spare seats. 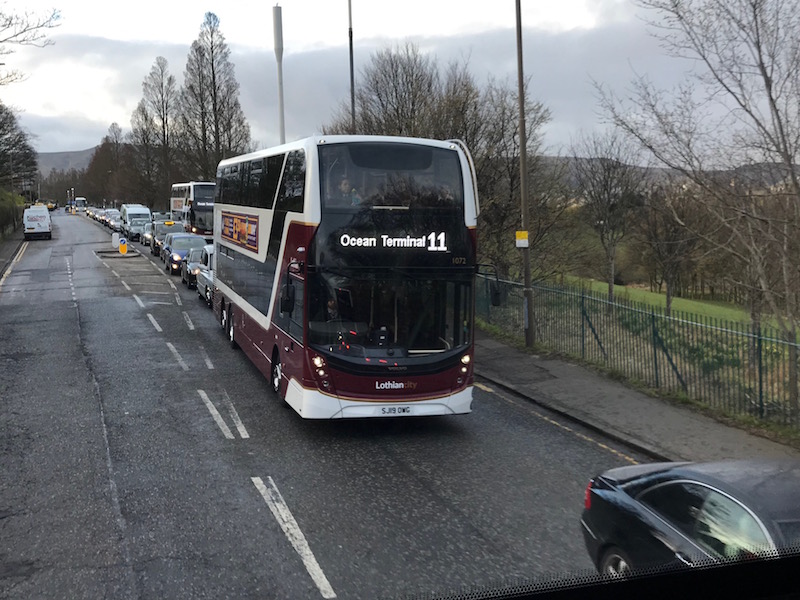 I can certainly appreciate why 100 seat buses make sense on such a busy corridor through the Morningside area heading into the city centre. The current timetable supplements route 11’s daytime ten minute frequency with extra peak hour journeys running at least every five minutes. It looked to me as though there were extra buses to those with at one point four buses virtually following each other, and not long after four more, all well loaded.

Coming back into the city on my return journey between 0800 and 0900 we also got busier and busier as we approached the stop called Morningside Station (there isn’t one) and it was interesting to note there were seats available on the top deck especially towards the rear but downstairs was obviously getting crowded and congested with our driver calling out for passengers to go upstairs “where there are plenty of seats”.

I read Richard Hall, Lothian’s MD, suggesting the introduction of these high capacity buses might enable reductions in frequency. On the strength of this morning’s observations I’m not sure you’d be able to squeeze too many peak buses out, they’re very busy, although not all the route is yet run with the new buses.

Slightly off topic I was very pleased to note Lothian Buses have now relaxed their £10 minimum transaction value for the purchase of mobile tickets so I was able to buy a one day ticket for £4 – and a great bargain it is too.

But one other Lothian tradition still baffles me and that’s the absence of using the famous and popular Princes Street where many passengers board and alight as a timing point either in timetables or on the onboard displays.

It must confuse visitors and tourists that the only references are to either Elm Row or West End, Lothian Road which are the stops before and after Princes Road – and 14 minutes apart at that. Most odd.

Lothian are excellent at providing timetable information – displays of leaflets in their Travel Centre and bus station – and there’s a colourful diagrammatic network map. Their website is full of well laid out helpful information and their fares are great value. There’s real time information via online and on the app as well as at many bus stops with a long established system that now looks a bit dated, albeit seemed to be working well, including switching to giving advice about using the new (Enviro400XLB) buses!

All in all a great positive development to see these new high capacity buses in service. I’m sure there are applications for such workhorses elsewhere in the country.