No bus company does route branding as well as trentbarton (as they like to be called, with no capital letters). trentbarton were the original bus route brand masters and have retained that crown trailblazing regular investment in impressive new vehicles, upgrades and refreshes to the brands and an eye for getting the detail right which many others could learn from.

I spotted they’d launched an additional skylink brand between Nottingham and East Midlands Airport last summer so decided to take a look at how the brand fits into the ‘really good bus company’* family of brands. (*A tag line that now seems to have been dropped, even though they are still ‘really good’).

Unsuprisingly skylink buses are clean, smart, attractive and comfortable and ride well. Drivers are smartly turned out, friendly and helpful. The brand is consistently applied on the livery and bus interiors with timetable leaflets available. All hallmarks of trentbarton’s consistent quality operation.

The new skylink runs every 30 minutes through Clifton as it heads southwestwards out of Nottingham including the adjacent large Park and Ride terminus at the southern end of the tram network, before joining the A453, Remembrance Way, and running fast to the airport taking just over half an hour for the end to end journey.

This skylink is not to be confused with the other skylink which runs every 20 minutes from Nottingham via Long Eaton and taking just under an hour to reach the airport, where one journey an hour terminates, another continues to Coalville and the third heads south to Loughborough via Kegworth. 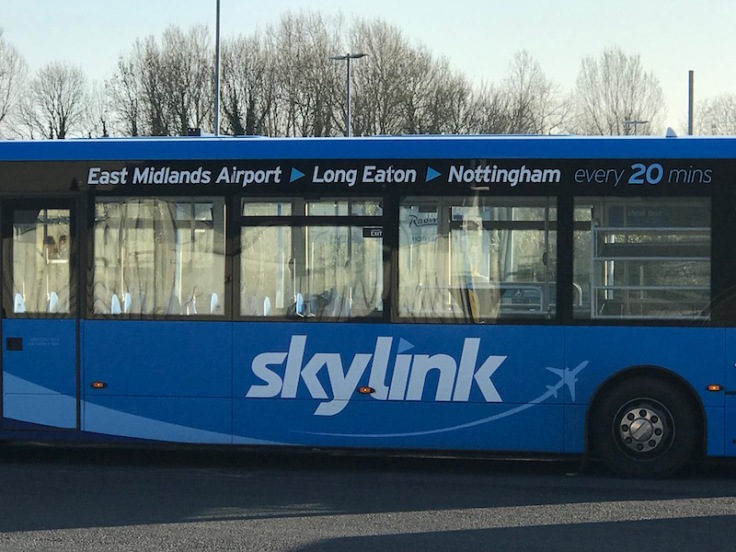 That skylink is not to be confused with a third skylink which also runs every 20 minutes, but from Derby via Alvaston and Castle Donnington to the airport in 42 minutes before continuing to Loughborough (either two an hour via Kegworth but to a slightly different route to the second skylink above, or one an hour via Diseworth) and then fast in just 28 minutes more to Leicester.

As you’d expect from trentbarton, all three skylink branded routes sport the same family style with just the colours varying Derby sporting yellow; Nottingham and Clifton a grey on blue and the original Nottingham via Long Eaton a lighter blue. 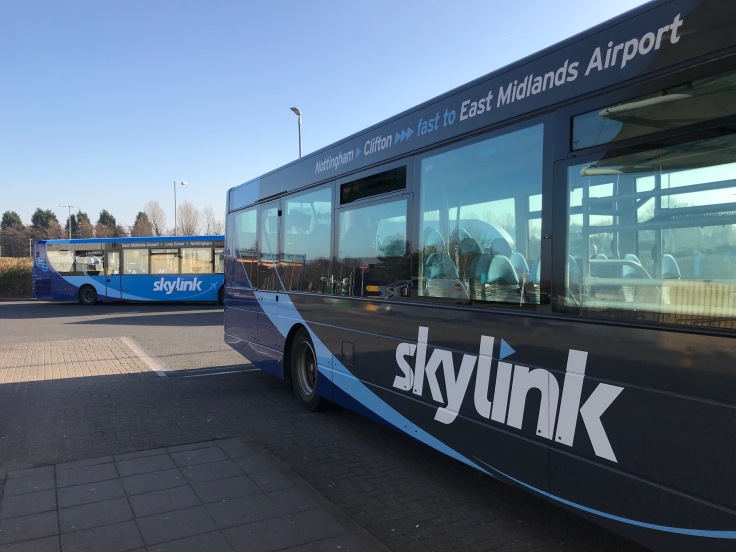 As you’d also expect bus stop plates are smartly turned out all along the routes with the three skylink routes nicely identified, particularly important on the outskirts of the airport where the two Nottingham skylinks depart from opposite sides of the road. 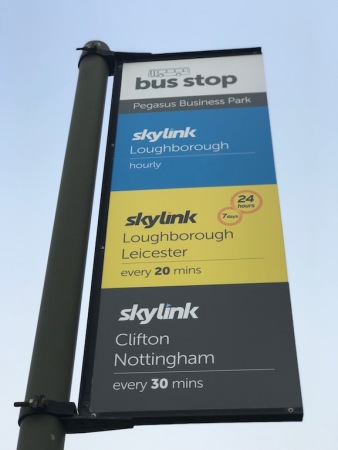 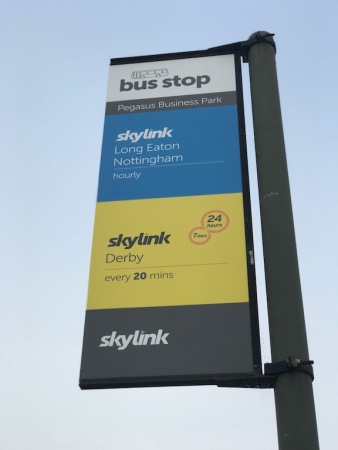 It all comes across as being part of one nice happy coordinated family of skylink routes, all promoted on the trentbarton website….

…and in the timetable leaflets for both the yellow and blue/grey routes.

Except there’s one subtle differentiation I stumbled on when working out the best ticket to buy to have a ride on these routes.

Unlike airport bus routes in cities such as Glasgow, Edinburgh and Bristol which are dedicated to airport travellers and consequently generally charge a premium fare, the trentbarton two original skylinks also serve as handy local bus routes connecting communities along the way so charge standard rate fares and are shown as part of the bus network. The new skylink charges £6.50 single (trentbarton’s maximum fare) compared to £5.20 on the slower original route, but still good value for residents of Nottingham jetting off from the airport. The Derby skylink charges £4.70 for a single from Derby to the airport.

Even better trentbarton’s £6.50 zigzag day ticket (although not valid before 9.30am Mondays to Fridays) is also valid so gives great value for passengers changing buses in Nottingham, from Mansfield for example.

However, as I found out on Saturday when boarding the yellow skylink in Derby bus station, zigzag is bizarrely not valid on that route …. unless you upgrade to a ‘zigzag plus’ for another £3.50. You see, despite outward appearances of a family brand, and the route appearing on the trentbarton network map, yellow Derby skylink is operated by Kinchbus a sister subsidiary company of trentbarton and not trentbarton, although both companies are owned by Wellglade. 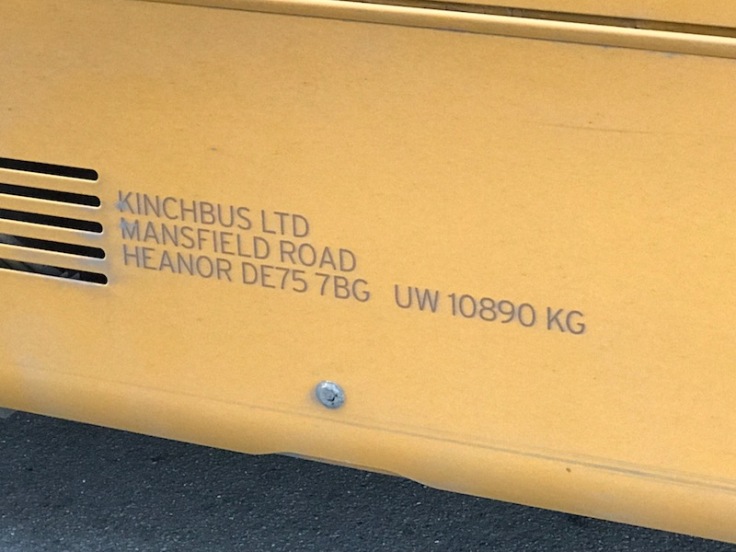 It’s a small point in the grand scheme of the great things trentbarton do, and they truly are one of the shining beacons of bus industry good practice, but it’s a niggle enough for me to write about it now, and I suspect it does niggle a lot of passengers who don’t spot the finer print of legal lettering on the side of a branded bus, and have got a bus into Derby from further afield, for example Ashbourne or Alfreton inending to zigzag their way to the airport. 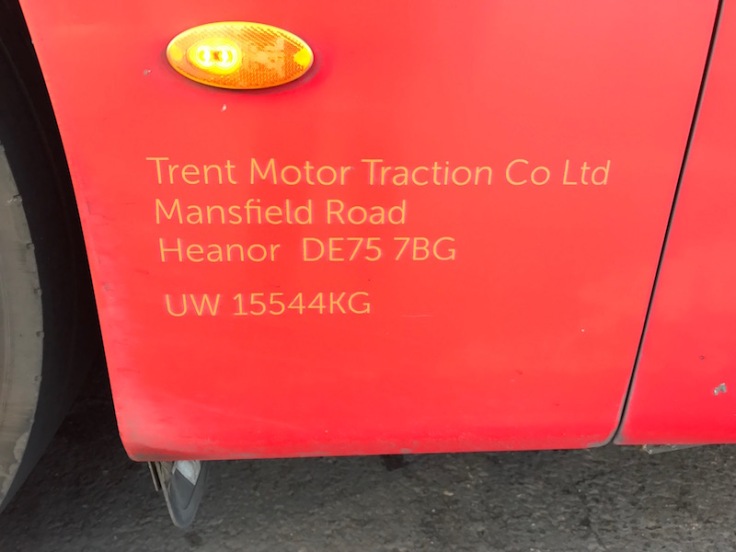 It just seems unnecessarily anomalous that the single fare to the airport is 50p cheaper on Derby skylink than Nottingham skylink (and £1.80 cheaper than Nottingham Clifton Fast skylink) but £3.50 more expensive if you come from somewhere else and change buses in Derby rather than Nottingham.

Just to add to the skylink brand confusion, the blue Nottingham via Long Eaton skylink is promoted on the Kinchbus website on its network map! 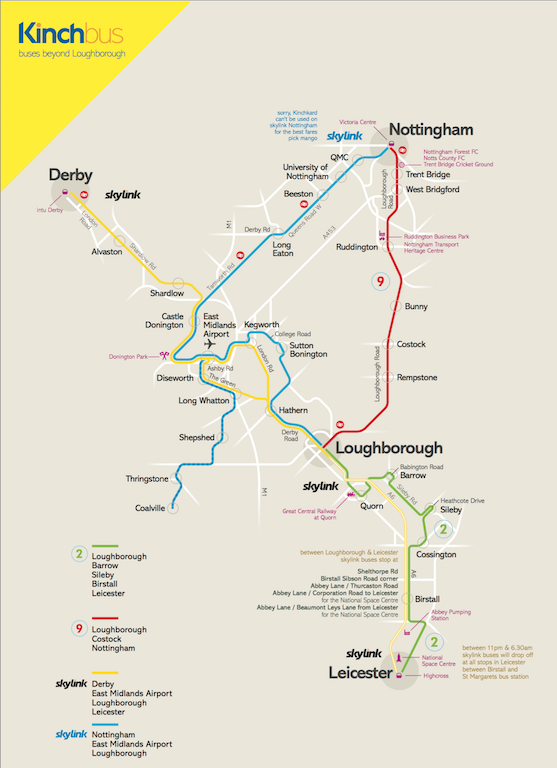 Wellglade are introducing contactless payments with new Ticketer machines including a London style daily and 28 day cap at the appropriate rates for those tickets. At the moment only the Kinchbus Derby skylink and the joint route branded as Pronto (with Stagecoach) between Nottingham and Chesterfield have the new Ticketer ticket machines able to offer this facility. It will be interesting to see how this catches on as the new ticket machines are rolled out. For now, you have to remember to touch out on the Ticketer machine by the driver as you alight, whereas with trentbarton’s proprietary smartcard branded as Mango, there’s a touch out device located in a convenient spot on the last stanchion on the nearside before the door as you alight.

There’s no indication on either trentbarton or kinchbus websites how quickly this will be rolled out to other routes, but the enthusiastic and helpful James who was in Twitter Control for both branded companies on Saturday was effusive in his helpful explanations of the new set up, if perhaps a little premature. He also tried to justify the different ticket validities between trentbarton and kinchbus, explaining the companies are independently managed, as he replied in a helpful way, from both companies Twitter accounts!

As always it was good to spend  some time in both Derby and Nottingham over the weekend and, zigzag ticket anomaly aside, see quality bus operation.

4 thoughts on “Skylarking on skylink”