There’s a great bus ride to be had in that part of England where Lancashire meets Cumbria meets North Yorkshire.

I recently took a circular trip from Lancaster (Lancashire) taking in Kirkby Lonsdale (Cumbria) and Ingleton (North Yorkshire). I highly recommend it.

Stagecoach run the 80/81 from Lancaster to Ingleton (80) and Kirkby Lonsdale (81). While Kirkby Lonsdale Coach Hire run the 581 filling in the gap on the map between the two towns.  In fact these 581 journeys continue on to Lancaster (confusingly numbered 582) via a slightly different route having started way back south in Skipton (as a 580). Three numbers, three counties, one bus route!

You have to choose your travel times carefully for the circuit as the 581/2 is only two-hourly and there are only four journeys a day on the 80 with the last departure from Ingleton inconveniently early at 1325 (although see suggestions below). But it’s certainly worth the ride as the journeys offer splendid scenery and Ingleton is full of charm and delight while Kirkby Lonsdale’s well worth a stroll round.

I made a morning of it and went clockwise round taking the 0840 (81) from Lancaster to Kirkby Lonsdale, but if you want to make more of a day of it after a lie-in I’d recommend an anti-clockwise circuit with Ingleton visited first on the 1010 (80) from Lancaster.

Here are some suggestions for the bus companies and local authorities on what works and what could be improved. Consider it a free bit of consultancy to grow the market and earn a bit more revenue.

Hats off to Lancashire County Council for reinstating the Kirkby Lonsdale Coach Hire 582 journeys beyond Kirkby Lonsdale to Lancaster earlier this year in March. Quite contrary to the cuts happening elsewhere. It brought buses back to the villages of Arkholme and Gressingham (and every 2 hours at that). I travelled that route earlier in the year and especially remember the narrow Loyn Bridge crossing over the River Lune – it’s a definite ‘driver of the year moment’.

I mention this as point no 1 is there’s scope for some joined up promotion of the 80/81 with the 581/582 rather than the two separate leaflets produced by Stagecoach and Kirkby Lonsdale Coach Hire. It just seems obvious to me to cross reference these publicly funded bus routes and show a combined route map. Without this, and without a network map of either Lancashire or North Yorkshire prospective passengers will be oblivious to the possibilities.

Whch brings me to point no 2. Leaflets for the 80/81 and 580/581/582 (called the Craven Connection) are impressively available but only one place had both – well done Lancaster Visitor Information Centre (VIC). The 80/81 leaflet was available in the lovely Stagecoach Travel Shop in Lancaster bus station (and its very helpful staff member, Ann) but nothing for the 581/2 while the 581/2 leaflet was available in both Kirkby Lonsdale and Ingleton VICs but nothing for the 80/81.

Thirdly the timetable case outside Ingleton Community Centre/VIC only has the 580/1/2 timetable displayed (as well as the Sunday Dalesbus 881) but crucially not the 80. I expect this might be because the former is a NYCC matter and the latter is funded by LCC. 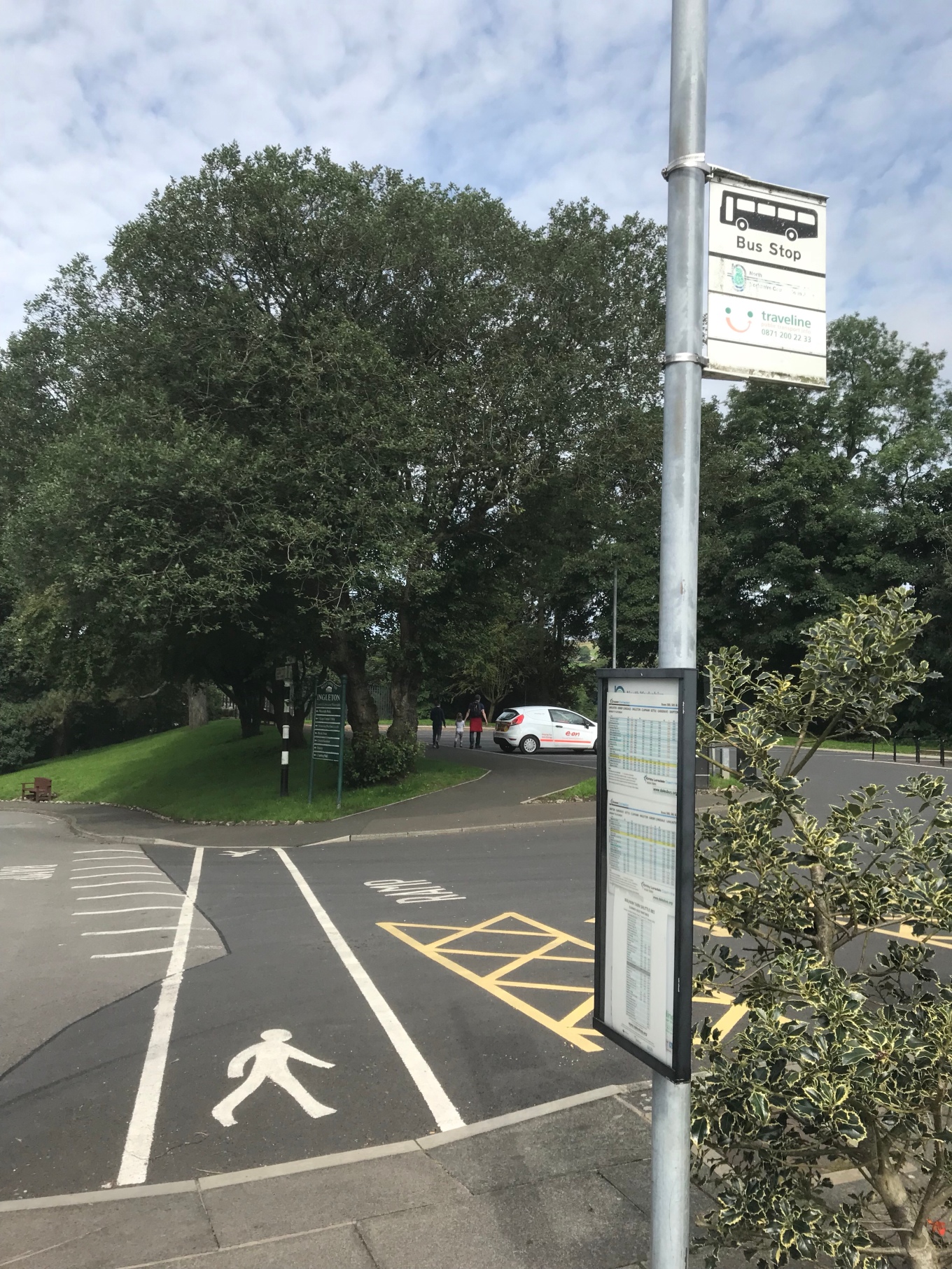 It’s good to see timetables stuck up in the window of the Ingleton VIC for every service – I’m sure that being an initiative of the very friendly and helpful lady who looks after the shop there. 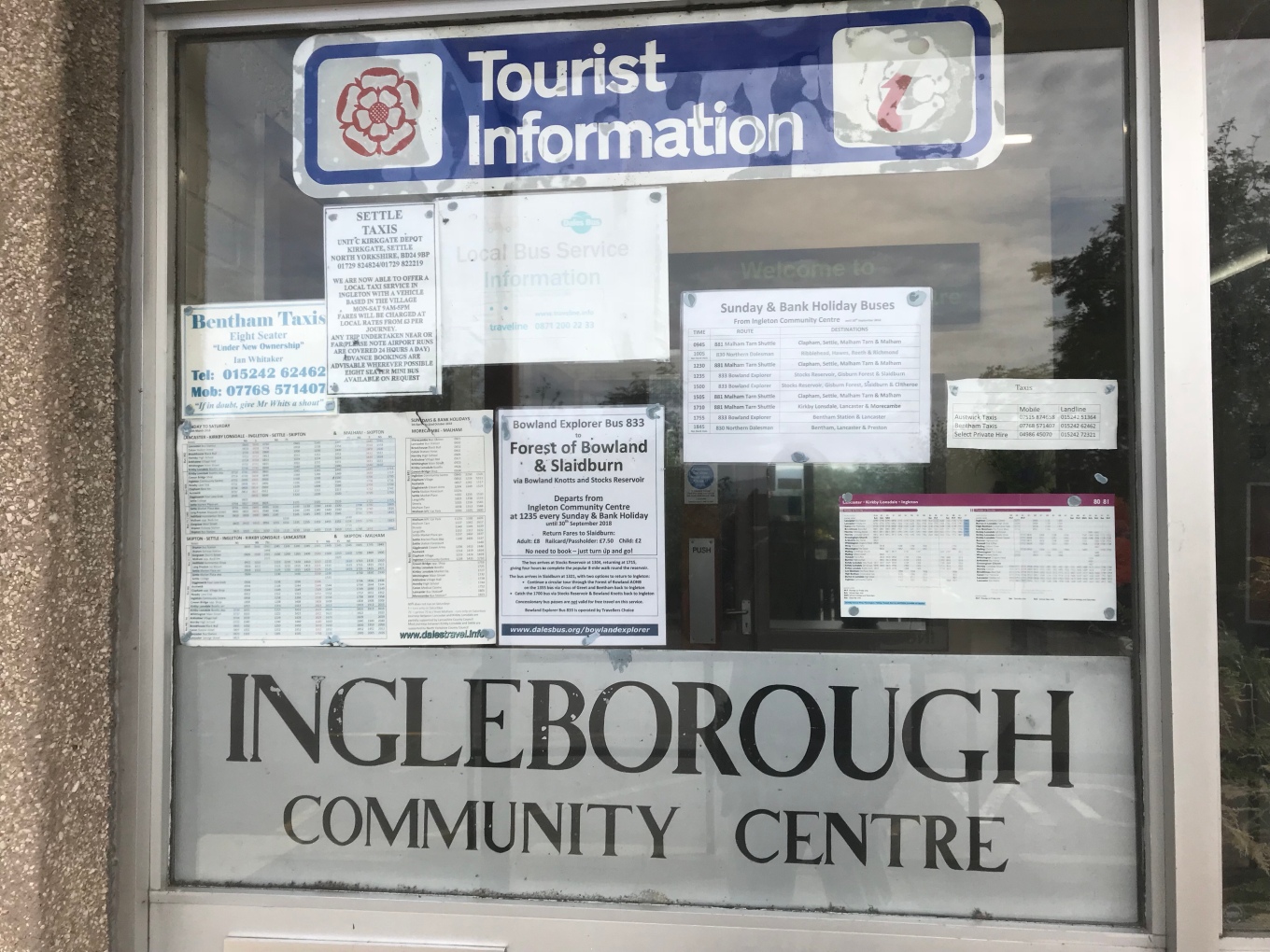 Fourthly is the old chestnut of not having an all operator day ticket. Come on Lancashire/North Yorkshire if it can be done in the south east of England I’m sure you can organise something too. Stagecoach Cumbria and North Lancs have various Dayrider/Explorer options for their routes and Kirkby Lonsdale Coach Hire has a day ticket for its routes so it shouldn’t be beyond the considerable skills of those highly regarded companies to get together to make it easy for passengers.

My fifth suggestion is to Lancashire County Council and Stagecoach regarding that rather unhelpful early last journey from Ingleton on the 80 at 1325. There’s a Stagecoach bus arriving Ingleton at 1521 which appears to go dead to Kirkby Lonsdale for one of the two schoolday 81 departures at 1541/1545 or just the one on non schooldays. Why not run this in service from Ingleton at 1525? Also promote the later journeys on the 581/2 at 1558, 1758, 1858 and 1958 in the 80/81 leaflet making it clear there are other options.

Finally I’d suggest promoting the 5/6 journey a day Stagecoach route 567 from Kirkby Lonsdale to Kendal in the mix as this, with the more frequent and infamous 555 (Kendal to Lancaster part) offers extended circular journey opportunities.

It’s all about making it easy for potential passengers and growing the market for leisure travel.