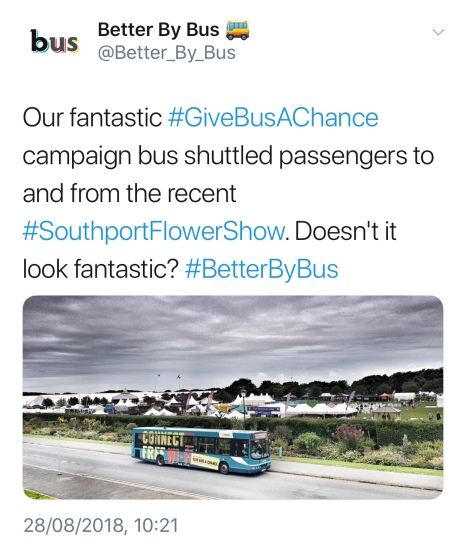 I arrived in Liverpool yesterday lunchtime to try out Arriva’s new Click service and soon spotted the awful ‘Say Yes To Bus’ bus with its gaudy contravision vinyl, passing by on route 53.

‘Say Yes To Bus’ is a campaign funded by partners in the ‘Liverpool Alliance’ with the laudable objective of encouraging bus travel across the Liverpool City Region.

A marketing agency called Agent Marketing is running the campaign. They tweet under the Better_By_Bus handle and as well as ‘Say Yes To Bus’ have come up with the ‘Give Bus A Chance’ slogan. 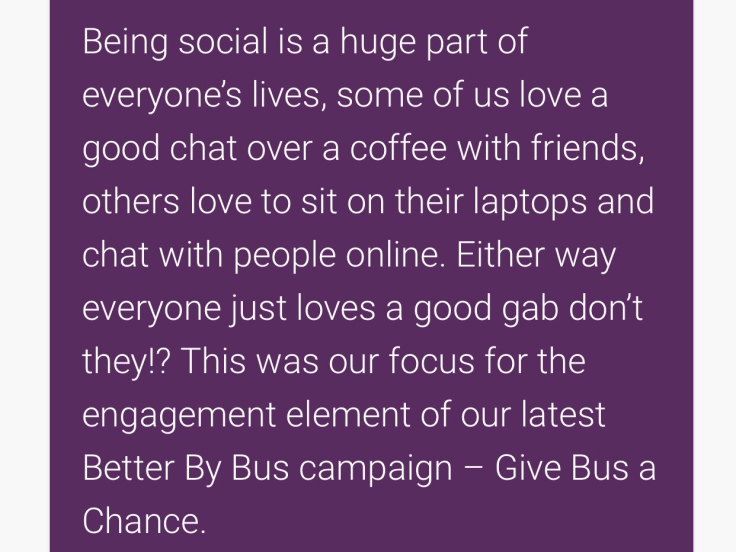 Agent Marketing boast they ‘help develop brands through insight and collaboration’. They ‘connect people through a unique, united, multidisciplinary approach to marketing. In this era of constant change we do whatever’s absolutely necessary to help you transform and unleash potential.’

Sounds impressive; so I thought I’d test how the potential for bus route 53 is being unleashed at Liverpool’s Queen Square bus station during last night’s peak period.

In the event I whiled away a happy 90 minutes from around 4.30pm to 6pm observing and waiting. Here’s what I saw. I was also hoping THAT bus would come along to test out those ‘clear views’ from the interior! 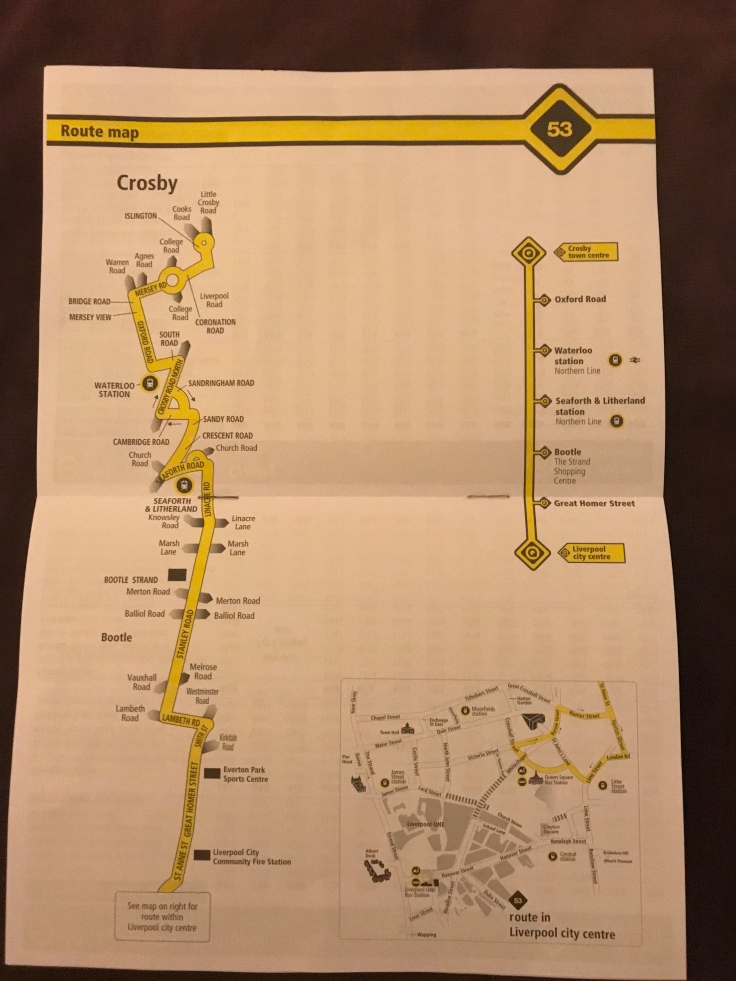 It didn’t take long to notice queues building up at the Queen Square boarding point and to realise the Arriva journeys were consistently running late and pretty much on the Stagecoach timings effectively providing two buses every 15 minutes and double the expected wait for passengers. Not really Saying Yes To Bus.

On the first occasion this happened, the Stagecoach bus had hung back at the setting down point at the top end of the bus station but regulars were obviously used to the phenomenon, saw the Arriva single decker getting uncomfortably crowded as it loaded, waited for it to depart and sure enough within a minute the nice gleaming Stagecoach double deck drew up and departed on the tail of the Arriva bus with a handful of happy passengers on board. 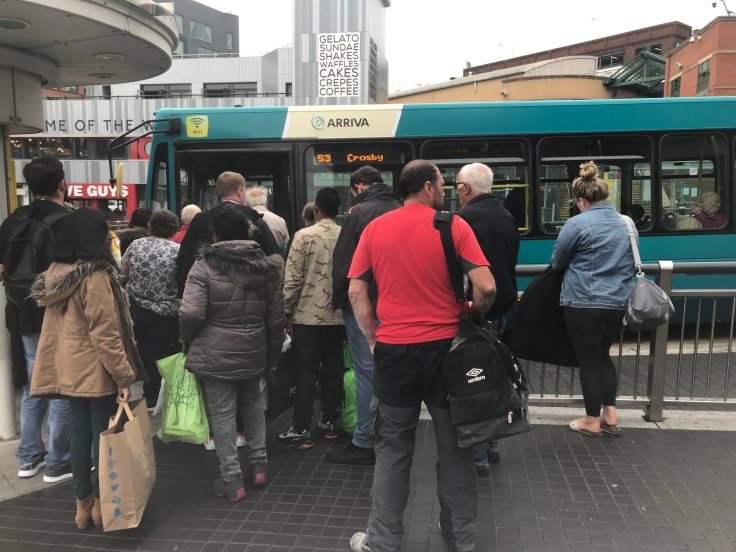 Around fifteen minutes later and a hefty crowd has built up who were visibly relieved to see the single deck Arriva bus arrive at the setting down point further up the bus station closely followed by the next Stagecoach double decker but this time that driver decided the best thing was to head straight off without waiting for the Arriva leftovers at the departure stand.

Another fifteen minutes; another hefty queue; another Arriva single deck pulls up; another Stagecoach bus immediately behind, this time a single deck too. The Arriva driver decides to share the load and closes the doors after taking around half the waiting crowd leaving the rest to hop aboard the Stagecoach bus. 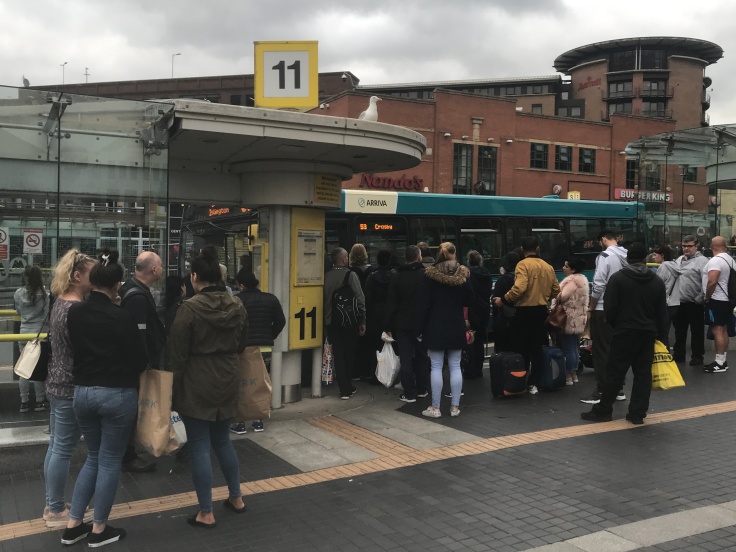 Another fifteen minutes; another hefty queue; and this time no sign of an Arriva bus as a Stagecoach single deck pulls up to greet the waiting crowd. Except sure enough it’s almost immediately followed by the Arriva single deck which has a curtailment at Waterloo Interchange just short of the scheduled Crosby destination to try and get back on time. The tables are turned as the Stagecoach driver sets off leaving some of the waiting crowd for Arriva. 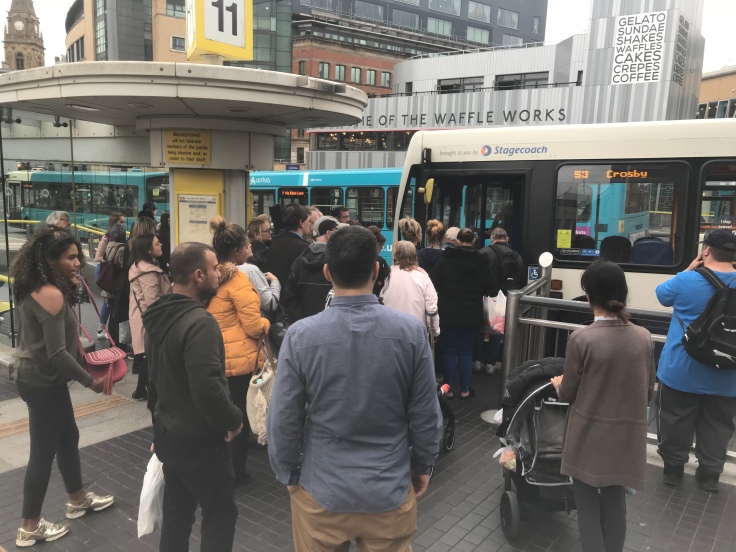 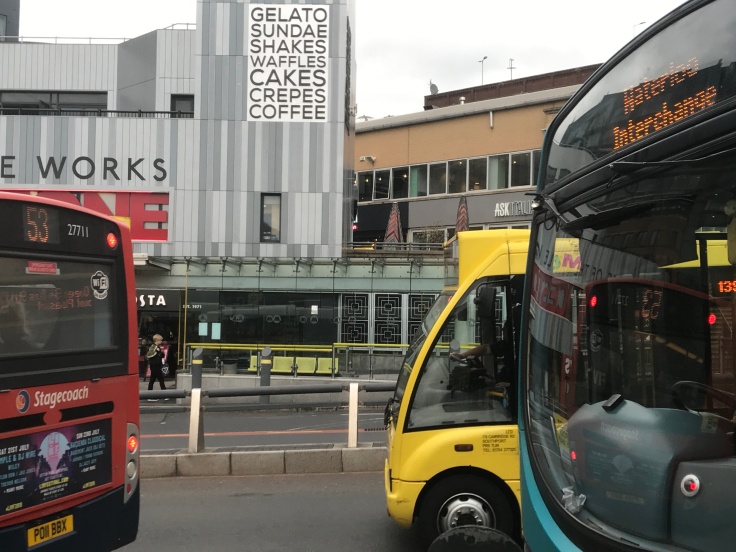 And guess what? Another fifteen minutes and another Stagecoach bus comes first and it’s another smart looking double decker. The crowds are slimming down as we’re approaching 6pm and the main peak is over. 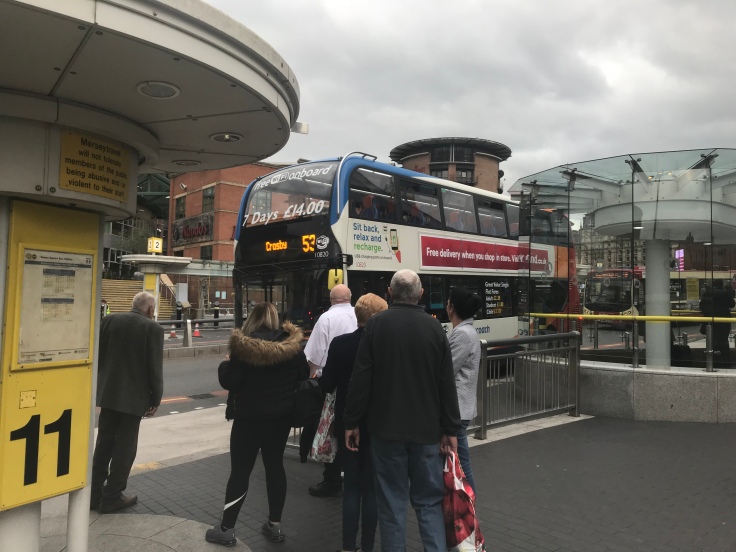 But where is that Arriva ‘SAY YES TO BUS’ single decker? I’d worked out from my sighting earlier in the day it was due about now.

And sure enough it came gliding down the bus station but seeing the Stagecoach bus had just pulled away from the stand drove straight by without stopping wrongly assuming no one would be waiting.

I looked at the man who’d just arrived at the stop and wanting to catch it too. He looked at me with a resigned look. I reckon he was thinking twice about Giving The Bus A Chance. I don’t blame him.

It might make it ‘Better By Bus’ if Arriva paid some attention to the timekeeping of route 53 so the route’s potential really can be unleashed. A full fleet of double deckers would come in handy.

Finally, on a more positive note, I hear Stagecoach sensibly have had no truck with the awful contravision for the ‘Say Yes To Bus’ campaign and instead settled for a more modest single deck side.

Shame they’ve blocked the view out of the windows with other vinyl!

One thought on “I Gave the Bus A Chance”