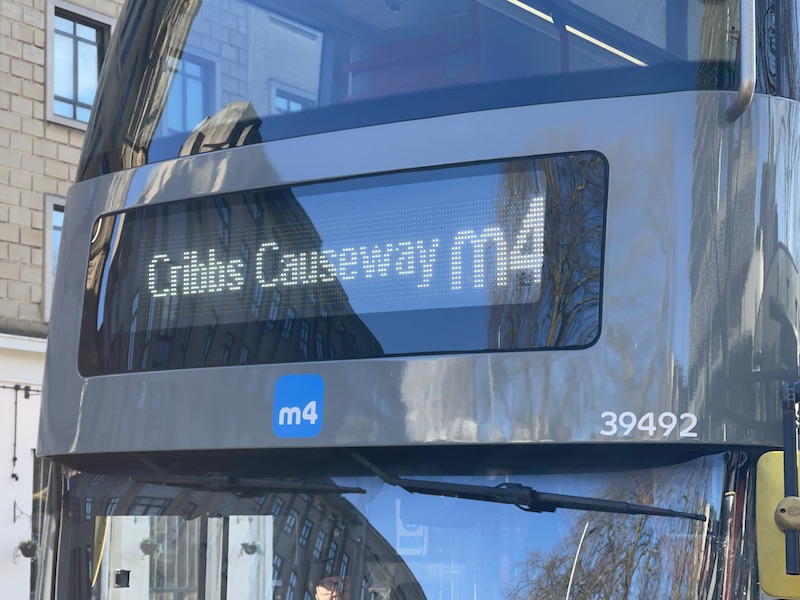 No; not the motorway although obviously the M4 does go to Bristol. The clue is in the lower case ‘m’. This is all about Bristol’s latest new bus route as part of the city’s metrobus branded network which began on Sunday.

The new route m4 runs from Cribbs Causeway to the city centre via Little Stoke, Stoke Gifford, Bristol Parkway railway station and the University of West of England campus at Frenchay.

It joins the m1, m2 and m3 routes which began in January 2019, September 2018 and May 2018 respectively. Four years on from that trio comes a fourth making for a quartet of routes as shown on the updated metrobus network map below.

The colour coding shown on the map is also used on the buses dedicated to each route which brightens up the otherwise grey landscape of the background metrobus livery.

The new m4 is operated by First West of England. Initially the m1 was sub-contracted to HCT owned Bristol Community Transport but when that business went bust last year First took it over meaning metrobus is now all operated by First.

The m4 kicks off at 06:00 from Cribbs Causeway on Mondays to Saturdays operating every 20 minutes through to 19:20 then half hourly until 23:25 with a half hourly frequency on Sundays between 08:30 and 19:55. The scheduled journey time from Cribbs Causeway to the city centre is around 42 minutes stretching to 54 minutes in the morning peak meaning the service take six buses with generous layover at the termini during the off peak.

Buses in the new m4 livery are four year old Scania/ADL Enviro400 City two-door powered by biogas. They’re comfortable to ride in giving a smooth journey and offer the usual usb sockets, audio announcements including a display on the lower deck …..

….. although no visual display on the upper deck advising what the next bus stop is.

But there is a route map on the cove panel.

I had a ride up and down the route yesterday starting at 11:44 from Bristol Parkway railway station to Cribbs Causeway. It’s the first time a metrobus bus route has served the station.

It was good to see bus shelter timetable displays had been updated with departures for the m4 clearly shown, but there didn’t seem to be an iPoint where passengers can buy tickets. Metrobus operates a buy before travel arrangement with no tickets sold on the bus so I’m not sure what passengers are meant to do when boarding at Bristol Parkway if they don’t want to use a smartphone app or tap on and tap off with a bank card which looked to be the only options. (Update: I’m advised there is one iPoint on the walk to the city centre bound bus stop which I didn’t see on my visit)

Other bus stops exclusively served by the m4 on the route had had the ‘metrobus’ makeover including an iPoint, so I’m not sure why Bristol Parkway has missed out.

Infrastructure developments as part of the m4 introduction include a new railway bridge on Gipsy Patch Lane in Lower Stoke. Here it is before…..

I noticed the bus stop towards Cribbs Causeway at the eastern end of Gipsy Patch Lane had white hatch markings which motorists were happily driving over as buses were at the bus stop.

There were about 15 passengers on board heading towards Cribbs Causeway (which is where a huge out-of-town retail park called The Mall is located) which you might think is very good going for the first weekday morning of a new bus route but the m4 has been introduced along with some cut backs to other services.

The m4 takes a quicker route between Bristol Parkway and Cribbs Causeway than either the 19 and 73, so it does provide a faster journey.

There are plans to divert the route through a huge housing development called Brabazon on the site of the former Filton airfield once building starts.

Arriving in Cribbs Causeway at just after 12:00 I saw the 12:00 departure for the city centre still on the stand so ‘stepped up’ my plan and caught that for my southbound journey to the city centre just as it was leaving.

As you can see it was an m3 green coloured bus which had apparently substituted for a breakdown earlier that morning, but it did cause some confusion for passengers during the journey not least when we reached the University of West of England Frenchay Campus which the m3 also serves.

We were reasonably busy during the journey particularly from the University from where we took the fastest route into the city centre using the bus only access junction on the M32 (that is a motorway not a high numbered metrobus route) reaching Cabot Circus in the city centre at 12:40.

The University campus now has the m4 (3 an hour) as well as the m1 (4 an hour) and m3 (which was 6 an hour but now reduced to 3 an hour) providing a quick journey into the city 10 times an hour as well as other routes which follow a slower route.

In the city centre the bus proceeded from Cabot Circus to its terminus at what’s called The Centre but not before a driver changeover at the intermediate bus stop called Broadmead. This took five minutes to accomplish which was rather frustrating for those of us just wanting to travel to the next and final stop. It would be more passenger friendly to do the changeover at the terminus when we’d all left the bus.

The bus stop at The Centre displayed an updated timetable departure list for the m1 and m3 which both had a revised timetable from Sunday, as well as the m4 …

… and a new updated map on the iPoint.

I stepped back at The Centre and completed my rounder back to Bristol Parkway on the original bus I’d travelled to Cribbs Causeway on.

It was a quiet journey especially as we followed an m1 back to the University campus.

It gave me an opportunity to see the bus only slip Road off the M32 from a northbound direction which is always impressive ….

…. as are the associated bus priority measures preventing other vehicles from using it.

As well as Brabazon on the airfield there’s evidence of a considerable amount of house building elsewhere on the m4 route.

And more to come.

First West of England must be hoping these developments happen soon if they’re operating the m4 as a commercial venture as it looks to me its justification for existence depends on them.

Finally, well done to those responsible for information provision as it was heartening to see everything in place.