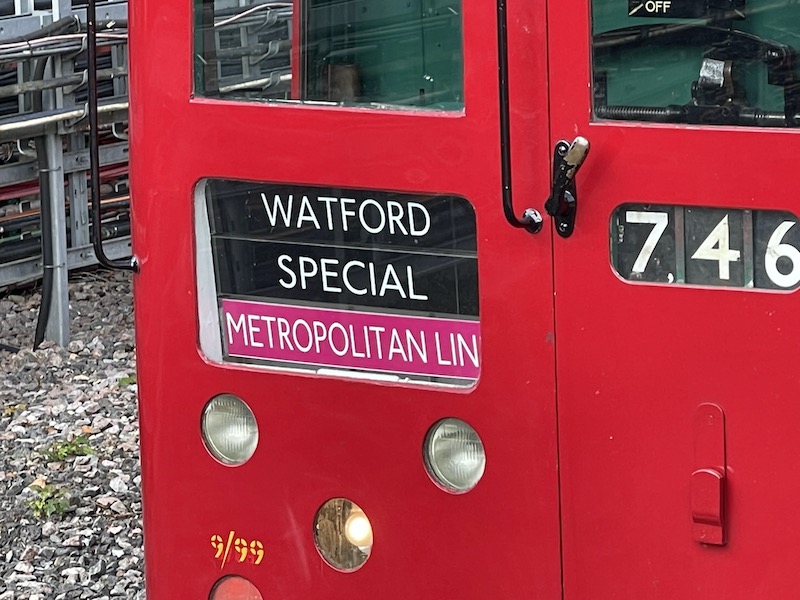 A shorter blog than usual this morning; appropriately about a shortened 4 car Underground train.

London Transport Museum has a beautifully restored four car Underground train dating back to 1938 in its Acton based collection which occasionally runs on bookable special trips on the network.

The train which was restored in 1999 was out again last weekend providing special journeys between Amersham and Watford linking two northern legs of the Metropolitan line not normally connected by trains except for one or two journeys at the beginning and end of the day to and from the sidings at Rickmansworth.

So it seemed a good opportunity to take a ride on tracks that never saw this class of train as well as destinations not normally linked. The Museum’s special runs don’t come cheap – a return ticket cost £25 (reduced to £17 for members of the Friends group) but it’s usually in the ‘money can’t buy’ type of experience so usually worth it.

Over 1,000 cars of the ‘1938 stock’ were built in the late 1930s following years of trials and development which resulted in many innovations being incorporated including under floor driving equipment giving more room for passenger seating which in turn was covered by a woollen moquette with a specially commissioned design.

Although everything was highly functional the design was deliberately luxurious in appearance for the time including, for example, art-deco lampshades….

….. and varnished floors, which “when combined with the red and green panels and seating produce a warm and inviting appearance combining quality and everyday efficiency” according to the Museum’s blurb; and they’re right, as you can see.

The train was running non stop between Amersham and Watford via what’s called the North Curve on both Saturday and Sunday slotting in between scheduled journeys on both the Metropolitan line and Chiltern Railways’ trains.

It was a very well organised event with many Museum volunteers on hand to make sure everyone knew which of the four lettered cars (along with colour coded wristbands) passengers were allocated.

The Friends of London Transport Museum were also present on one of Amersham’s platforms with a great selection of memorabilia and as always I ended up buying back something I regretted selling from my collection some time ago when I was moving house (more on this in a future blog).

It was lovely to see so many people taking a ride who were clearly not just the usual train enthusiasts.

A real mixture of people of different ages and a complete gender mix as well as families out enjoying themselves on an adventure in addition to the usual ‘track bashers’ pleased to be ‘doing the North Curve’ at a sociable hour instead of a before dawn or after midnight trek.

I couldn’t resists taking a photograph of the driving cab showing its rudimentary nature compared to nowadays.

After serving on the Bakerloo line for several years the last of the 1938 stock were overhauled once more in the mid-1980s and moved to the Northern line.

Inside the train are authentic advert panels as well as original line diagrams from the Northern line reminding us that central London stations have been renamed over the years (Strand and Charing Cross).

The trains were retired in May 1988, just short of 50 years service, although some ended up giving sterling service for many more years on the Isle of Wight’s Island Line until January 2021.

It was a great experience and well worth the ride including in monetary terms.