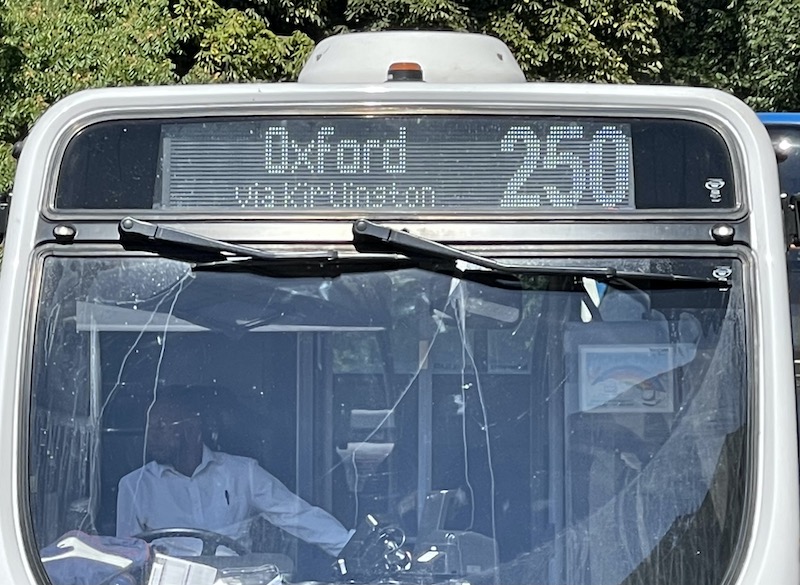 It looks as though Oxford’s failed Pick-Me-Up DRT operation is going to make a comeback; this time in deep rural Oxfordshire (cue emoji with raised eyebrows).

It’s reported Oxfordshire County Council later this year is planning to replace hourly tendered route 250 which currently serves the expanding residential development known as Heyford Park, as well as various small villages and hamlets, on its route between Bicester and Oxford. partly with a shuttle bus between Bicester and Heyford Park and the rest of the route, including the villages, by a new rural DRT operation branded Pick-Me-Up.

This development is interesting for two reasons. Firstly, unsurprisingly, it’s going down like a lead balloon with new residents who’ve recently moved into Heyford Park and will no longer be able to get to Oxford and secondly I can’t see villagers in the hamlets about to lose their regular dependable hourly bus service warming to the idea of the vagaries of a rural DRT as a replacement.

For many years the route was numbered 25A and there’s still a nod to nostalgia which I’m sure regular passengers appreciate while waiting at the route’s terminus bus stop in Bicester where, for old times sake, the number 25A is still displayed.

The route’s been run by a succession of operators over the years including Stagecoach, RH Transport, Heyfordian, Thames Travel, Oxford Bus Company, Hallmark and currently Diamond Bus which acquired Hallmark back in 2005.

Hugh of Bus Users Oxford who kindly alerted me to this development reckons “it was either Thames Travel or Oxford Bus Company who changed the number to 250 a few years ago.”

Heyford Park is a huge residential development underway on the disused former US Air Force base housed at RAF Upper Heyford, about six miles west of Bicester, circled top left on the above map.

Around 1,600 new homes are earmarked for the site with developer Dorchester Living starting on the first phase in 2013. That and each subsequent phase has helped subsidise route 25A/250 through Section 106 payments. According to the Heyford Park website, only 700 homes have so far been built with a total of nine phases for the 12 year project which begs the question why is route 250 being cut back now?

I think I’ve worked out why. Let me explain more.

Hugh also explains “an extra bus route from Heyford Park to Banbury was supposed to be added, but it has not happened. This is awkward because some of Heyford Park’s new residents find the only GP with whom they can register is in Deddington, (on the way to Banbury) to which there is no bus from Heyford Park.”

That awkwardness has been magnified with the proposed transformation of the 250 into a Upper Heyford and Bicester Village railway station shuttle route missing out Oxford as a destination. The Oxford Mail reported last month about “a devastated single mother of three having to sell her house” because of the upcoming change. Her children will be cut off from friends in Oxford and her 15 year old is hoping to attend a further education college in the city which lies 15 miles south of Heyford Park.

Oxfordshire County Council has responded “we are working with bus operators on a joint ticketing arrangement which will allow passengers to continue their journey into Oxford by train from Bicester” but that’s hardly much of a replacement for a direct through journey by bus.

“At Dorchester Living, we see ourselves as custodians of the places we create. Our unique business model allows us to take a long term view of our settlements and this encourages craft, care and creativity in all that we do. As community builders, we innovate for bespoke facilities and amenities that make life that much easier, and this has been fundamental to the reputation we have received in the industry for having an exemplary approach to place making.”

Does anyone ever believe this kind of tosh PR bollox?

The developers reckon Heyford Park will be a “sustainable development” where residents will be able to live car-free. Some hope.

On my visit to Heyford Park on Monday last week I didn’t see much evidence of “craft, care and creativity” as I wandered around the already built houses, a bog standard Sainsbury’s Local….

…. next to a pharmacy, dentist, cycle hire and repair shop on a small parade with flats above …

… opposite a pub, restaurant and hotel ….

The only activity aside from more house building on the former airfield itself was four lads taking turns to practise wheelies on two bicycles between them. They were good at it too.

I’d travelled on the 12:02 journey from Bicester on route 250. I’d spotted on bustimes.org the bus was running 10 minutes late, timekeeping not helped by two accidents bringing the nearby M40 to a halt and more traffic than normal using local roads as a blockage avoiding diversion.

We were soon away from the Manorsfield Road collection of bus stops which forms Bicester’s central bus terminus after a quick toilet break for the driver at around 12:15 with just three passengers on board.

The two year old Streetlite is on loan from Stanwell based Hallmark Connections (also owned by Diamond’s parent Rotala) and still wears that company’s plain white livery but now with added Diamond logos on its exterior and an interior still adorned with large airport style luggage racks exposing its previous use at Heathrow Airport. Boy did that racking rattle as we bombed along towards the village of Middleton Stoney and on to Heyford Park. It was almost headache inducing.

The racking also carried somewhat outdated advice on fare changes from the beginning of the year in its former Surrey homeland; I’m learning they like nostalgia in Bicester.

As we approached Heyford Park we turned on to the long unclassified road which runs along the full length south of the former airfield. South of this is where the houses already built can be found with the Sainsbury’s Local and few other amenities, already described, forming that central focus mid way along the road where there are bus stops and shelters either side of the road.

The shelters are nothing special.

Quite ordinary for a “place making” built on a theme of “craft, care and creativity”. There’s a real time departure display in the Oxford bound shelter which is “not available” …

…. and confusingly on the bus stop pole two timetables are posted for route 250.

One current, incorporating recently added peak hour journeys between Heyford Park and Bicester Village station (making for a half hourly service), above one which is no longer current – always good to “craft, care, creativity …… and confusion” for would be passengers and that nod to nostalgia no doubt once again.

I had an hour’s wander around and saw the second bus on the route’s two bus cycle pass heading towards Bicester also running ten minutes late. It picked up one passenger at the Heyford Park bus stop….

…. and when it returned from Bicester I took it on to Oxford to complete my travels. There were 11 on board when it turned up, still 10 minutes late, with four getting off as I boarded and three more at the next two stops along that straight road as we left Heyford Park the remaining four alighted when we reached Lower Heyford leaving just me on board as we headed towards the villages of Kirtlington, Bletchingdon and Hampton Poyle served on route to Oxford.

Kirtlington is a delightful picturesque village with one senior boarding at one stop and three younger people at the other. I couldn’t help but overhear the former tell the driver “I’d nearly given up on you turning up” due to the lateness, so when she sat close to me on the bus I thought I’d be helpful and enquire whether she had a smartphone and was going to point out the advantages of using an app or the bustimes.org website to show the real time location of buses.

She had a mobile phone, she explained, but only uses it for calls as she likes to keep everything private and doesn’t trust technology to do that. I didn’t have the heart to tell her about the plan to withdraw the bus from Kirtlington in favour of a DRT scheme. She’s just the passenger profile rural routes like the 250 serve who’ll be left behind as technology trumps practicalities.

So why is the cut back to route 250 coming now when there’s still hundreds of new homes to be built, and presumably more Section 106 monies to come, especially as Dorchester Living isn’t the only house builders on this vast site.

Oxfordshire County council has its Bus Service Improvement Plan (BSIP) largesse of £12.7 million which has got to be used on exciting things including rural DRT rather than boring things like maintaining a traditional lightly used rural bus route.

So from the narrow point of finding something to use that funding on it makes sense to curtail route 250 to run, presumably a one bus hourly all day shuttle between Bicester and Heyford Park with another bus making it half hourly in peak hours funded by the continuing Section 106 payments from the developer and use BSIP funding for a whacky “innovative” rural DRT for the villages further along the route, linking them with Oxford using a second all day bus.

That makes for a need for two all day buses and a peak hour extra.

Which equals the number of buses running the current timetable between Oxford and Bicester.

This change may look like it’s been crafted with “care and creativity” by county transport planners but I doubt it’s in the best interests of passengers – not least my smartphone sceptic from Kirtlington nor the hundreds of families moving into Heyford Park who have a need to travel to Oxford by a convenient direct bus.

One final thought: the last bus from both Bicester and Oxford currently leaves the termini at around 19:50, and on Sundays (only to/from Bicester) at 17:55. Perhaps it would have been better to use BSIP funds to run later buses so residents at Heyford Park really could consider being car free and still be able to get out in the evenings.