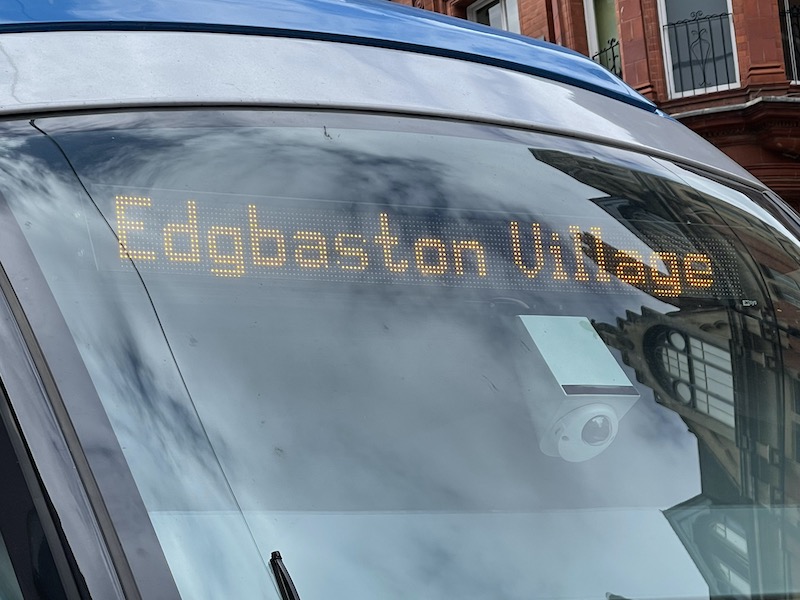 As well as Barking Riverside, last week also saw another small but significant extension of Britain’s rail and tram networks open up for business.

Sunday 17th saw the extension of West Midlands’ Metro tracks for just under a mile from its central Birmingham terminus through to Edgbaston including two additional stops at Brindleyplace and Five Ways as well as its new terminus curiously called Edgbaston Village.

It’s hardly a ‘village’ in the sense most people would use that term. More something dreamed up by kite flying city planners supported by aspiring property developers and estate agents.

It seems a complete misnomer when you see the terminal point in the ‘village’ is just a minute’s walk away from the city’s huge Five Ways junction which sees the A4540 pass over the A456 with the B4217, B4214 and Broad Street also making the number of roads up to five as they join the roundabout melee alongside a giant Morrisons supermarket. Not so much a “lifestyle destination” more an urban roundabout.

Odd naming aside, this is phase two of the Birmingham Westside Metro extension – phase one saw trams extended from Grand Central (aka Birmingham New Street) to Centenary Square and the Library back in December 2019.

Since then work has progressed for the last two-and-a-half years on the new extension including the need for extra safety measures through lockdowns.

Service frequency for the extension is planned for every six minutes but the well publicised bodywork faults (aka nasty cracks) to the CAF built tram fleet necessitating a complete withdrawal of the entire tram service for three months between March and June this year is still impacting fleet availability.

Luckily recent deliveries of eight new trams are now available for service but until enough of the original trams are trackworthy enabling a full service to run, the frequency has reduced to every 12-15 minutes.

The timely opening of this new extension, which included restoring trams to Grand Central and the Library has been greeted with excitement by Andy Street, Mayor of the West Midlands pointing out the new stop at Brindleyplace sits at the heart of “one of our regions most vibrant business and hospitality districts attracting locals and visitors alike.“

His excitement continued: “this news could not have come at a better time as our hotels and venues prepare to offer a warm Brummie welcome to the thousands of people coming to town for the Commonwealth Games this summer. And the vast improvement in the tram connectivity in the city centre will make it easier than ever to choose public transport – helping us to reduce congestion and tackle the climate emergency.”

The extension is part of an expansion programme which will see the network triple in size through a £1.3 billion investment programme.

As you can see from the map below, it’s planned to have trams running to Brierly Hill, Wolverhampton rail station and the site of the new station for HS2 in Birmingham and longer term to Solihull and Birmingham International.

The new trams (CAF Urbos 100) like their earlier siblings (CAF Urbos 3), are very tram like. Low on seat comfort, high on standing capacity. They do what they say ‘on the tin’, as they say.

The extended route takes you beyond the Library at Centenary Square, the terminus since December 2019 …

…. and over the Birmingham Canal into Broad Street, as Andy Street pointed out, famous for its hotels and up market restaurants where there’s a stop at Brindleyplace right outside Qavali restaurant ….

…. and another one just east of the large Five Ways junction after which the trams (and buses) are now the exclusive users of the underpass with all other traffic banished to the large surface level roundabout making for some interesting road markings on the west side where traffic meets trams again…

…. and trams continue the short distance to the new terminus….

… which has been green-ified. Presumably to create that special village vibe.

There’s lots of excitement about trams arriving in Edgbaston and a week on from its introduction the numbers travelling were impressive.

My journey to Edgbaston from Grand Central was seven minutes late arriving, and oddly the electronic sign wasn’t letting us know this, remaining resolutely blank throughout the wait.

Other tram stops have more traditional real time displays which seemed to be working fine.

The driver was accompanied by a supervisor and it was clear from the cautious way we proceeded he was under instruction which included taking the pantograph down for the unwired sensitive section of route through to Centenary Square.

After arriving at the Edgbaston terminus it was a quick change of ends for the driver and instructor with the layover enabling a more or less on time departure to return to Wolverhampton.

So, what’s next for West Midlands Metro? The next extension surely has to be the much delayed short branch past the bus station to the rail station in Wolverhampton.

Work began constructing this nearly five years ago in autumn 2017, yet it still hasn’t seen a tram. It had been planned to open in time for the Commonwealth Games but now route testing will only begin once the Games are over

It’s hoped to have the extension open “later this year”. The new in-car line diagrams ominously still show it as “under construction” but it is constructed, just not in operation.