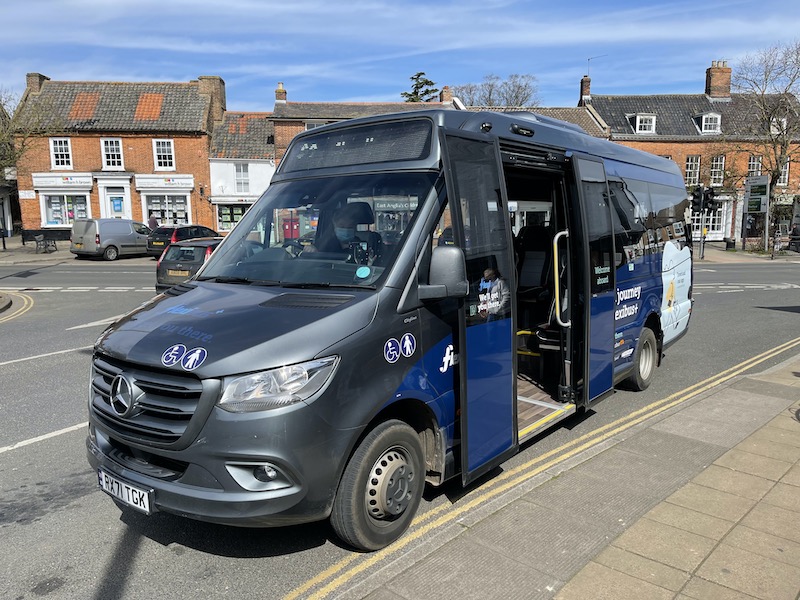 It’s been a while since I tried out a new DRT service so I was pleased to put that right yesterday by giving the recently introduced new scheme in rural Norfolk the once over.

It’s been included as part of Norfolk County Council’s well established ‘Flexibus’ brand which has been running flexible ‘demand responsive’ buses in three areas of rural Norfolk for some time.

The three areas are Harling, Wayland and Wymondham and each has a map showing the area covered. But it’s a fairly restricted service only available between 09:00 and 14:30 on schooldays and 08:00 and 16:00 on Monday to Friday school holidays.

The schemes also use old technology with passengers either needing to book by telephone or completing an on-line form. Ride requests must be submitted by 15:00 the previous day (Friday for travel on Monday).

There’s also a similar scheme based on Acle although this seems to have set times for most of its journeys.

This latest addition to the ‘Flexibus’ brand (which has a discreet + sign added making it ‘Flexibus+’) began on Monday 28th March and is operated by the young dynamic and eager to grow Vectare bus company using Via Transportation’s app and software. It aims to provide a major step change for Norfolk’s rural dwellers, not least the ability to book a journey up to two weeks in advance and use app technology as well as a phone booking arrangement.

I had an opportunity to have a chat with Jonathan Hampson, Via Transportation’s Head of UK Partnerships, at last week’s Young Bus Managers’ conference in Cardiff where I was doing my usual co-hosting role and happily he was one of the attendees. It was good to exchange thoughts on the role and funding of DRT and while our enthusiasm for DRT differs we both agreed on the vexed issue of funding – it’s no good anyone thinking DRT is the silver bullet to solve the rural transport subsidy challenge that’s bedevilled local authorities grappling with ever reducing budgets over the last few decades. It won’t. Rural bus provision whether with a big or small bus, scheduled or on demand, will always need funding.

So it was disappointing to see Norfolk County Council’s news release heralding Flexibus+’s launch acknowledging the £700,000 grant from the DfT’s Rural Mobility Fund will allow the scheme to run for four years “in which time it is hoped that it can become self-financing and continue to run for many years to come”.

Sorry to disappoint the 7,700 people living in Swaffham and the twenty hamlets located in the 85 square miles operating area served by Flexibus+ but come March 2026 the service will almost certainly end when the funding runs out. Enjoy your new found rural mobility while you can.

As readers will know I’ve learnt the more you can plan ahead with your travel requirements the more likely it will be that DRT will meet your needs. The chances of summoning up a DRT bus “on demand” in the “here and now” and expecting it to be “instantly responsive ” are pretty much close to zero, especially for any established scheme with growing usage.

So before heading off yesterday to Swaffham (the main trip attractor of this new Felxibus+ operating area which extends to the south of the town) I successfully pre-booked my two journeys on Sunday evening, using the easy to use Via app, so they’d connect with the First Eastern Counties excel branded bus route from Kings Lynn.

You’re given 20 minute slots to choose from when making a booking and as my excel bus was due into Swaffham market place at 12:13 I selected the 12:15 to 12:35 window and at 21:00 hours on Sunday evening came a reassuring text confirmation.

I also booked my return journey from the hamlet of Cockley Cley where I’d planned to travel allowing enough time to eat a picnic lunch on the village green before heading back and received confirmation of that too so all was well as I set off on Monday morning.

My connection was a handy 11 minutes in Kings Lynn between the Great Northern train arriving at 11:31 and the excel bus leaving the bus station at 11:42 – which also calls at the station a minute later – but as sections of the line north of Ely are single track I’m always weary of late running causing delays when trains pass at Littleport. In the event the southbound train had been cancelled and we arrived into Kings Lynn just four minutes late at 11:35 giving enough time to wander through to the bus station.

First’s excel (Peterborough to Norwich) service really is impressive with its half hourly frequency and superbly branded and comfortable buses.

We did a quick bus and driver change in First’s bus garage on the southern fringe of the town – which was handled very professionally by both drivers by placing one bus platform right up against the other meaning a quick and slick changeover for everyone on board.

But even so it cost us a few minutes and I worked out our arrival time in Swaffham market place was going to be nearer 12:18 – just as I received an updated text from Flexibus+ at 11:48 advising my bus would be with me in 30 minutes making for a tight spot connection.

Just as a precaution I replied to the next text giving me a 10 minute warning and as I wasn’t sure whether that would be received gave the Flexibus+ booking line a call to explain the situation.

Tom from Vectare answered the phone very quickly (no Council switchboard to negotiate here as I’ve experienced elsewhere) and said he’d let the driver know which was all very reassuring.

Arriving into Swaffham at 12:18 the phone rang and it was Tom letting me know the driver had been delayed on the previous drop off in North Pickenham and would be with me in about ten minutes. He also confirmed this in a text which was all good especially as the app was erroneously telling me the bus had arrived and was with me, which would have been unnerving if Tom hadn’t called.

I’d notice that whereas Via’s software usually shows the route and current location of the driver and bus heading towards you, it hadn’t done so on this occasion so perhaps there were teething troubles with the tech.

Karen, the driver, arrived at 12:30 and off we both headed to Cockley Cley which is a small hamlet about seven minutes south of Swaffham and devoid of a bus service for many years save for a Saturday shopping journey.

Karen had worked on the community bus operated Flexibus operations in the past and having recovered from health issues was pleased to have joined Vectare aiming to ultimately drive on a part time basis but for now, with Malcolm, is working full time with the two of them covering the early and late shifts across the six-days-a-week 12 hour operating day from 07:00 to 19:00 and their lunch breaks between 12:00 and 14:00.

There’s just one bus on the operation – a Mercedes Sprinter with the standard smart looking interior for these vehicles.

It was good to see leaflets for the service available inside the bus. These explain there are three distinct operations – identified as F1; F2 and F3.

F1 is available between 07:00 and 07:45 when a journey will bring any commuters into Swaffham to connect with the excel bus to Norwich or Kings Lynn or Konnectbus route 11. The final three hours of the day between 16:00 and 19:00 are allocated to taking commuters home from Swaffham.

F3 runs a fixed route on Monday to Friday at 08:02 from Barton Bendish to Swaffham and return at 07:45 and the reverse in the afternoon between 15:05 and 15:42. I assume this is aimed at school children although the leaflet doesn’t specify a schooldays only operation.

Then there’s F2 which is the general on demand service across the two Flexibus+ zones which in line with the original Flexibus hours is available 09:30 to 14:30, although this scheme also operates on Saturdays between 07:00 and 19:00.

The leaflet also has map/diagrams showing you where the bus connects with other routes in Swaffham and Mundford and a full area map showing the two zones which determine the fare to be paid.

Concessionary passes are accepted and fares are very reasonably priced with savings for multiple trips. Fares are paid to the driver either by cash or contactless card using a Ticketer ticket machine rather than paid through the app as with many DRT schemes. Anyone booking a journey through the app has their first journey free until the end of June.

I arrived in Cockley Cley and said goodbye to Karen who was heading back to Swaffham and set about having my lunch. It’s a very pleasant hamlet with a pub right next to a large church called ‘Twenty Churchwardens’.

But the most disconcerting thing was there was no phone signal – at least not on the BT/EE network I use – so I suddenly realised an app based and mobile phone demand responsive service is not much good when you can’t use a phone.

Yet another challenge for rural buses.

I was very pleased I’d booked my return journey before setting off otherwise I’d have been completely stranded.

At 13:10 I spotted the Flexibus+ bus being driven through the hamlet with Malcolm at the helm but no one on board.

I enjoyed a stroll around the village and discovered an intermittent BT WiFi Hotspot which luckily my phone managed to latch on to long enough to confirm the bus was on its way and would be with me at 13:27 – this time the app was displaying the information as well as a confirmatory text coming through.

At 13:29 Malcolm reappeared and arrived with a passenger already on board which was an encouraging development – when I’d seen him twenty minutes earlier he’d been heading out to pick her up.

Malcolm had previously worked for Ipswich Buses in his bus driving career and was obviously delighted to be driving Flixbus+ for Vectare. He absolutely nailed it with his observation that carrying three or four passengers as he’d done on Monday morning’s early shift ensured pick ups and journey expectations could easily be met but what, he wondered, will be the situation if it gets busier and more popular.

He cited Saturday’s operation – the first Saturday – where many more people were out travelling necessitating some deft work by the Vectare lads in ‘control’ to ensure he and Karen could get their breaks and journey requests could be made.

It turns out the Saturday shopping bus which connected a number of the hamlets with Swaffham has been withdrawn and many passengers on Saturday hadn’t realised this so one passenger in the know booked and others were waiting to board but weren’t on the booking.

Maybe it would help if details of the now withdrawn service had been removed from timetable cases along the route when the smart new Flexibus+ emblazoned bus stop plates was put up?

We were soon back in Swaffham and having bade farewell to Malcolm I made a convenient spot connection with an excel bus back to Kings Lynn.

It had been a very enjoyable ride out to Cockley Cley. I’d been impressed (as I’d expected to be) with the way Vectare are resourcing the operation including a very impressively responsive text and phone arrangement. I’m sure, as both Karen and Malcolm testified, residents of these isolated hamlets are delighted public transport, albeit with limitations, has returned, thanks to the DfT’s generosity.

Make the most of the next four years.