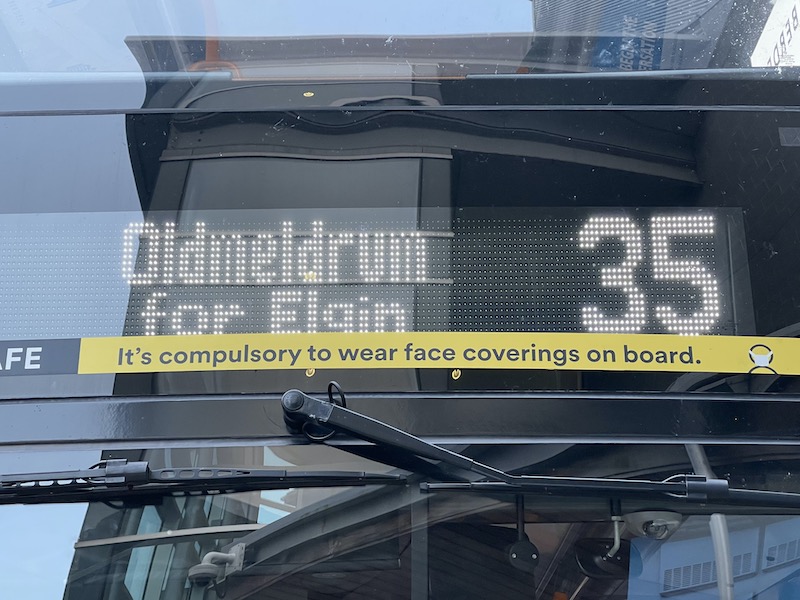 Last autumn I took a ride across Aberdeenshire on most of Stagecoach’s route 35 between Elgin and Aberdeen, and thought it was high time I told you about it.

Elgin (which lies 38 miles east of Inverness) and Aberdeen …

…. are connected by ScotRail trains running eight times a day with a 90 minute journey time.

Stagecoach Bluebird’s route 10 also connects the towns and runs more frequently at hourly on a direct line of route that more or less parallels the railway along the A96 but takes double the train’s journey time at three hours.

But by far the most scenic way to make the trip is to take the slower but wonderful route 35 also operated by Stagecoach Bluebird.

This also runs hourly and has a journey time just a tad under four hours but the extra hour is well worth the ride. As a bonus, whereas route 10 uses coaches or single deck buses, route 35 is operated by double deck buses offering spectacular views of the scenery especially as the route hugs the Moray Firth coastline between Buckie, Banff and Macduff for most of the first couple of hours.

Stagecoach invested £3.5 million in a fleet of 15 new Alexander Dennis Enviro 400s for route 35 in 2019 with minimal route branding comprising a large “SERVICE 35” between the decks at the front with the principal places served listed discretely along the tops of the first couple of windows on the upper deck.

Being relatively new, the buses hadn’t yet succumbed to the new Stagecoach national livery. In any event I’m not sure whether they’d qualify for long distance ‘school bus’ yellow or standard local livery. Inside, the buses sport the fad at the time for bright blue and orange moquette…

… prior to it being superseded by the more toned down, but still very smart, grey and blue, which I much prefer.

There are cove panels explaining the delights of the route but I always find these very difficult to read, if not almost impossible.

As they are to take a decent photograph of.

… where it continues on to Elgin (and Inverness) paralleling route 35. As I’d taken that journey before and it’s inland I decided to make the most of my time before darkness fell and change on to route 35 in Fochabers to head down to Aberdeen.

There were only two or three passengers on board the lower deck and the same number on the upper deck including a friendly and chatty young couple on the offside front seats heading for a night’s stay in Cullen – a delightful coastal town and location of the truly splendid Cullen Viaduct, as we shall see shortly.

After leaving Fochabers the bus takes a direct path back towards the coast at Portgordon by firstly passing along the A98 through Whiteash Hill Wood.

Arriving in Portgordon you catch a glimpse of the sea which will be in view for pretty much the next two hours as the bus continues along the coast firstly to lovely town of Buckle.

Twenty-five minutes along the coast from Buckle, passing Findochty and Portnockie we arrive into the popular spot of Cullen …

…. and that truly splendid viaduct.

This used to take the ‘Great North of Scotland Railway’ along the coast from Elgin to Portsoy which sadly closed in 1968. What a joy that railway line must have been to take a ride along.

There’s a toilet very close to the bus stop in Cullen which is handy for a quick visit for those who need to have a break on a four hour bus journey.

Ten minutes after Cullen we reached Portsoy where a few more passengers came on board as they had in the communities we’d been passing.

We headed inland along the A98 for the next twenty minutes or so until reaching Whitehills and Banff. The scenery is still something to behold as the sea is never far away.

Banff Bay separates Banff with Macduff and the A98 passes over a narrow bridge taking the road over the River Deveron which meanders all the way inland to Huntly and then into the Carbrach mountains.

Macduff is just five minutes east of Banff and is where Stagecoach have a depot right on the coast which garages the buses used on route 35.

We had a short break by the depot as we changed drivers ready for the second half of the journey where we leave the coastline behind and head down the A947 through Turriff, Oldmeldrum and Dyce to Aberdeen.

It takes just under two hours for this section and it’s quite a fast road to travel along. We didn’t stop much just picking up ones and twos in the main settlements.

It’s still quite a scenic route to enjoy though.

There’s another public convenience right by the stop in Oldmeldrum and I must say how helpful both drivers were in facilitating a quick relief stop along the route.

It had been a very impressive journey with wonderful scenery, not particularly busy, friendly drivers, a comfortable bus and good to see all the buses we passed were double decks sporting the route 35 minimalist branding.

The driver who took over in Macduff in particular was very friendly and seeing my interest in the route telling me all about a colleague who takes photographs of this and other routes which Stagecoach Bluebird operate. He also highly recommended I take a trip on route 201 between Aberdeen and Braemar – one for the ‘to do’ list when I’m next in Aberdeenshire.

In the meantime, I can recommend route 35 if you’re ever in the area.