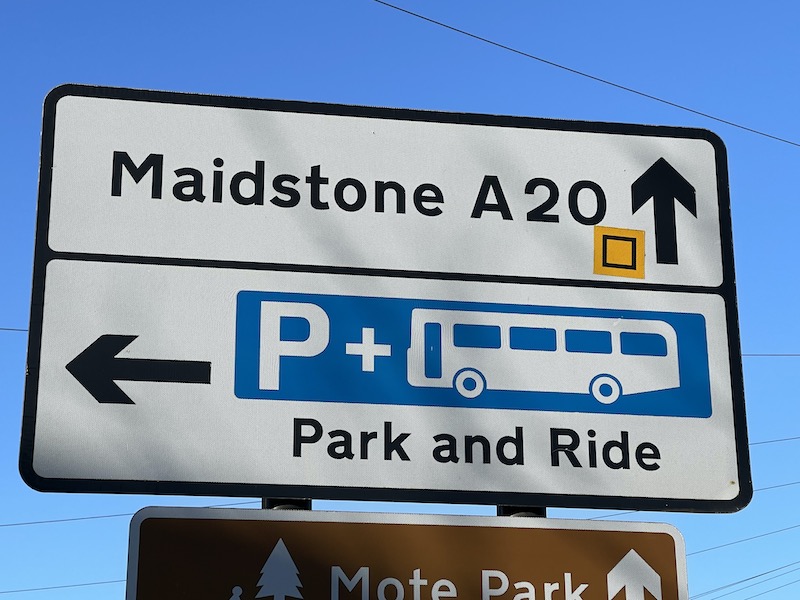 The pandemic hasn’t been kind to Maidstone’s Park & Ride service. Rewind to those carefree pre-Covid July 2019 days and there was much celebration as Maidstone Borough Council officially handed over the running of the town’s Park & Ride operation to Arriva with a six year contract committing the company to “provide both peak and off-peak services with upgraded vehicles to Euro 6 standards”.

Two and a half years on and the future of the service is bleak with Arriva announcing last month it will cease running the service in a month’s time after Saturday 19th February unless additional funding is made available.

Introduced 34 years ago in 1988, Maidstone’s Park & Ride at one time included four car parks offering 1,600 parking spaces for commuters and shoppers throughout the week. The large Sittingbourne Road site at Eclipse Park closed in February 2016 (it’s now an M&S store) while a smaller site closed at Combe Quarry in Tovil even further back in 2007 and was redeveloped for housing.

It’s not the first time the Park and Ride operation has been under threat. Back in 2018 the Council run services numbered 501 and 503 to the two car parks were losing money hand over fist. The service was given a stay of execution in January 2018 with councillors introducing a cashless “pay to park” arrangement which officers warned at the time could drive away a quarter of existing core users. In the event a whopping £242,000 subsidy for the year ended April 2018 rose to over £300,000 the following year.

Against that background it was somewhat courageous of Arriva to take on the contract as a “commercial” proposition reportedly receiving reduced funding from the Council of £162,000. The Council may have thought they’d got a good deal and a problem solved, but then along came Covid and Park & Ride is under threat of closure once again.

The two current car park sites are located on London Road close to the M20 junction to the north west of the town and just off the A20 Ashford Road to the east of the town. Both sites are well located being only around a ten minute bus ride from the town centre.

I recently took a ride to and from both sites to see what the background to the potential withdrawal is all about.

There’s been a bit of a backlash since Arriva’s bombshell announcement with opposition councillors pressing the Borough Council to overturn a decision taken at last month’s Strategic Planning and Infrastructure Committee refusing a request from Arriva for an additional £25,000 a month funding for three months to keep the service running.

There’s also the inevitable petition doing the rounds, which interestingly was advertised on the buses I travelled on as well as at the two Park & Ride car parks.

I arrived at the London Road site in time to catch the bus leaving at 10:00. It was noticeable just how empty the car park was with around 70 cars parked. In fact part of the site had been requisitioned for a Covid test facility.

The site is well signposted including a large Park and Ride sign on the M20 advising motorists to leave at the upcoming junction to access the site.

The car park itself is also well signed with plenty of information about the arrangements for parking and prices of bus fares.

It’s free to park and the fare on the bus is a very reasonable £2 return in the off peak and £3.20 in the peak with concessionary passholders travelling free. Perhaps no surprise therefore I reckon eleven of the twelve passengers who joined me on board the 10:00 journey into town looked like they were passholders as did most I saw on my four trips up and down the route.

The three buses used on the service are four year old Alexander Dennis Enviro 200 buses with a bespoke livery based on Maidstone’s dinosaur connections first launched at the 2019 change. The buses are named Iggy, Steggy and Spike in tribute to the discovery of ‘Iggy’ the dinosaur whose fossilised skeleton was unearthed in 1834 in the Queens Road area of Maidstone.

The names are carried on the nearside of each bus under the Borough crest. I was a bit puzzled by the window poster above stating “Fares from £2.50” whereas it’s actually £2.

The biggest issue with the service from a user perspective is the frequency. The buses display the ambiguous claim “up to every 20 minutes” ….

…. which is the case for peak hour journeys when all three buses are on the road. But come mid morning the frequency reverts from every 20 minutes to every 25 minutes using just two of the buses which can do a rounder in 50 minutes.

It’s not easy to remember departure times on a 25 minute frequency.

Fortunately bus stops at both car parks and in the town centre have a departure list showing the times when buses leave, as it’s almost impossible to do the mental arithmetic of adding so many 25 minutes on to work out when a bus will leave to suit your needs.

It’s all very well having those times on display, but most people will be out shopping in the town and unaware when the next bus back to the car park might be. It makes me wonder whether a half hourly service would have been far more preferable in the off peak so at least it’s memorable.

However neither a half hourly nor twenty-five minute interval service are particularly conducive to attract motorists to just turn up randomly at the car parks. Indeed on my visit to the eastern site at Willington Street I saw a car drive in just as the bus was leaving meaning the occupants had a twenty-five minute wait for the next one, and although there’s a shelter it was still cold on a winter’s day to wait that long.

The Willington Street car park, off Ashford Road, is clearly not as well used as London Road with just 35 cars on site at 11:00 and there was plenty of room for more. In fact learner drivers were taking advantage of the space to practice driving manoeuvres while I was there.

Like the London Road car park, this one is well endowed with notices explaining the virtues of using Park and Ride … for commuting, shopping and days out ….

…. as well as departure times and fares

The route into town from the London Road site from just where the bus leaves the car park is blessed with a bus lane for the first half mile (about a third of the journey length into the town centre) which must help peak hour buses.

Buses don’t stop at any bus stops along the route, only setting down and picking up at three stops in the town centre; two by the shopping area and one by Maidstone West station.

It turned out the dozen passengers on the first journey I made was the most I saw during my visit with most other journeys carrying between four and eight, and as already highlighted I reckon about 90% were concessionary passholders which would attract a discounted reimbursement from the county council on that £2 return fare representing a very low income. No wonder Arriva are struggling to make the service financially sustainable.

It’ll be interesting to see if the Borough Council does an about turn and provides the additional funding requested by Arriva. There’s much lobbying going on to persuade the Conservative controlled Council to keep the service going, mainly from the LibDem and Labour opposition councillors.

Back in July 2019 William Cornall the Council’s Director of Service and Regeneration said: “we have worked very closely with Arriva to make sure the popular Park and Ride services continue to the same high standard we have come to expect. As part of the arrangement Arriva will have the exclusive use of two car parks located at the current Park & Ride locations – Willington Street and London Road which will be free of charge to users.”

While Oliver Monahan, the then Area Managing Director of Arriva said: “from 1 July, Arriva will be running the Maidstone Park & Ride service. This is an essential service helping connect people to the town centre whilst supporting local businesses. Arriva are proud to be offering this public service and we look forward to serving customers with a frequent, punctual and reliable bus service.”

Oliver is no longer with Arriva, and sadly it looks as though this essential service won’t be either. But from my observations last week not many people are going to miss it, notwithstanding it might have been “popular” and “essential”.

I doubt another bus company will register the service and fill the void left by Arriva. The London Road car park site is leased by the Council and offers potential as development land for housing being surrounded by similar sites with planning permission or pending applications for over 500 new homes.

The Willington Street site would prove much trickier to develop as it lies within the environs of Mote Park. But a judicious diversion by Arriva of its half hourly route 4 to loop around the car park might keep the facility going for motorists and give a revenue boost to that route.

But there are plenty of car parks in Maidstone town centre with the Borough Council owned sites typically charging between £2.10 and £2.70 for up to two hours parking (£4.20 to £5.40 for four hours) but the privately owned large multi-storey above The Mall shopping centre charges just £2 for up to two hours and £3.50 for up to four hours.

And that’s the problem for Park and Ride.

As well as that 25 minute frequency.

While in Maidstone I took the opportunity to have a look at the £1.4 million recently refreshed bus station under The Mall (formerly The Chequers, formerly The Stoneborough Centre).

It used to be a dismal, depressing and dowdy place to catch a bus but I was impressed with the way its been spruced up with improved lighting helping to make the ambiance much better.

There are still five departure points either side of the tunnel but the frosted glass panels by the departure stands have been removed making the site feel much more open.

I also wandered over to Maidstone East station to take a look at the £5.2 million project to refresh the entrance and ticket office also completed last year and officially launched last month.

There was Iggy again to reinforce the link between Maidstone and the Iguanodon discovered by Gideon Mantell in 1822 – and I know all about as I scanned the QR code on the sculpture which took me to the Maidstone Museum’s website.

Meanwhile the entrance area both outside and inside the revamped station is looking lovely and pristine and long may that continue.

There’s a lovely view of the rear of the ticket office which is sited over the tracks from the ramp.

There’s step free access to both platforms from side accesses directly from forecourts on either side of the tracks.

Maidstone is set to lose its Park & Ride, but it’s got much improved bus and rail stations.