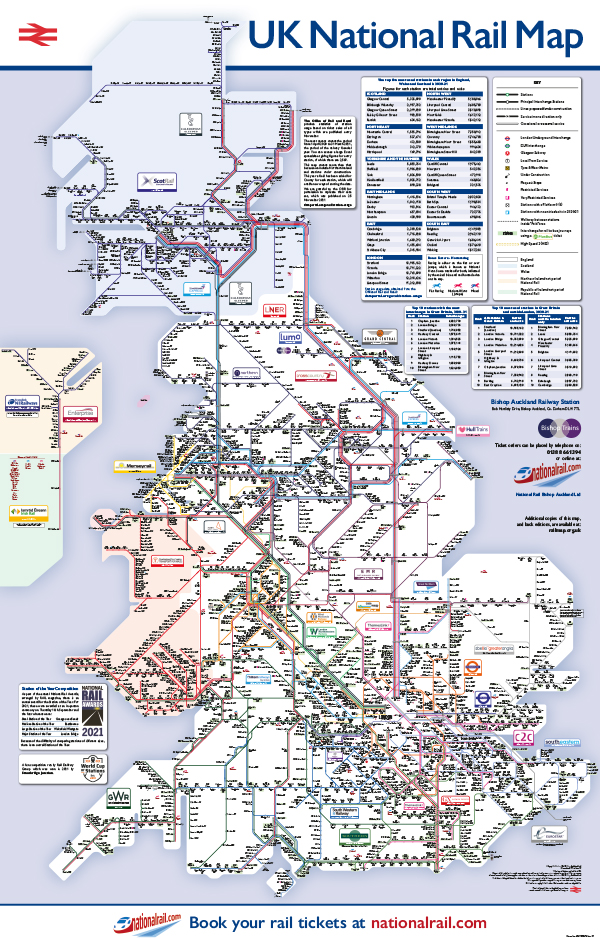 Regular blog readers will know how much I love a good map. So I was delighted to receive an invitation from a ‘long time ago’ colleague* in the bus industry, Alex Nelson, to a launch lunch for the latest edition of the splendid National Rail Map he produces every year as a commercial venture.

(*Alex worked for Go-Ahead North East in the late 1980s and early 1990s during the time the company bought Brighton & Hove and became a plc.)

It is an absolute masterpiece in cartographic design showing all the different Train Operating Companies and their territorial reach as well as a whole host of fascinating statistics such as the most and least used railway stations by region according to the last figures from the Office of Rail and Road (ORR).

Uniquely it shows each and every one of the ORR’s official list of 2,569 stations across the network including every station in the metropolitan areas and in London too. I don’t know of any other map that achieves such a comprehensive feat.

It’s even got the next new station to open (on Monday) on the line between Ely and Ipswich at Soham.

And for completeness it also shows those stations which are officially still open, (ie not closed) but which don’t have any trains calling. For example, Manchester United Football Ground.

This edition even includes the location of race courses as a bonus feature.

It’s all the more impressive when you hear the back story of the map’s origins. It was designed by a keen 15 year old, Luke Gardner, who used what was then his fairly primitive home computer using the basic ‘Windows Paint’ software to put the first map together.

Here’s a very early version of that original map, courtesy of Luke and Alex. It’s fascinating to see the iterations of the map in subsequent editions, and marvel at those original cartographic skills of a teenager.

That was twenty odd years ago and when it came to the attention of Alex who spotted a piece about it in Rail magazine and by then had left Go-Ahead and was busy running a tour business eventually leading him to establish an independent rail ticket and information website – he had registered and still runs nationalrail.com (a great place to buy your rail tickets) (as opposed to nationalrail.co.uk) – as well as Chester-le-Street station where he re-established and ran the derelict ticket office from 1999 as an independent venture, leading to huge success in reinvigorating the station and growing the number of passengers and trains calling there. In the 2000s, Alex took the initiative to also begin producing maps as a commercial venture, including the UK National Rail Map in 2009.

It’s had a number of tweaks since then and is now produced by graphic designers working for Alex but the original design devised by Luke (who now works as a timetable planner for TransPennine Express) is still followed, not least the 45 degree and 90 degree layout depiction for the railway lines which would surely have impressed Harry Beck, the all time master of diagrammatic map designers, were he still alive today.

Alex kindly invited a group of map minded friends along to his launch lunch, including Luke (pictured above), in the impressive surroundings of the Clothworkers’ Hall in the City of London, and the tension built as he opened the parcel which had arrived containing the first copies of the latest map hot off the press from the printers.

As highlighted, the detail contained on this map is quite incredible and I heartily recommend its purchase which can be done on the railmap.org.uk website for a very reasonable price of £11 plus £8 post and packing in the UK. It makes for an ideal Christmas present for either yourself or the map lover in your life. Copies of earlier editions of the map are also available for the ridiculously low price of £2 too.

Among the notable guests at yesterday’s launch was the legend that is Barry Doe who also has his very own network rail map – now in its 51st edition – on his website showing all the Train Operating Companies and their coverage by line.

It was great to catch up with Barry again – we first met at a conference in Llandudno at which we were both speaking in the early 1990s, as he reminded me, confirming his amazing memory and command of detail is as astute as ever. There’s no one who can touch Barry for extensive knowledge of rail ticketing and rail and bus timetables, maps and networks. A true transport oracle.

We’re very fortunate to have both these maps produced independently by Alex and Barry.

While on the subject of maps, before closing I must also give a shout out to Go Cornwall Bus for kindly sending me a copy of the three updated timetable books published in September which now feature all bus routes in Cornwall – both the tendered Transport for Cornwall network and First Kernow’s commercial network.

impressively these also contain comprehensive network bus maps. In previous blogs I’ve been critical of the lack of integrated information previously available in Cornwall so I’m delighted to see a proper integrated approach to bus information has now been achieved and to give praise where praise is due.

Well done to Go-Ahead, First Kernow and Cornwall Council for the production of these books which look like they’ll now be a regular feature and I’m sure will be much welcomed by residents and visitors to the area. Long may it continue, and First Kernow continue to develop and promote their innovative commercial bus routes specifically aimed at the leisure market to supplement this.

8 thoughts on “The best rail map ever”