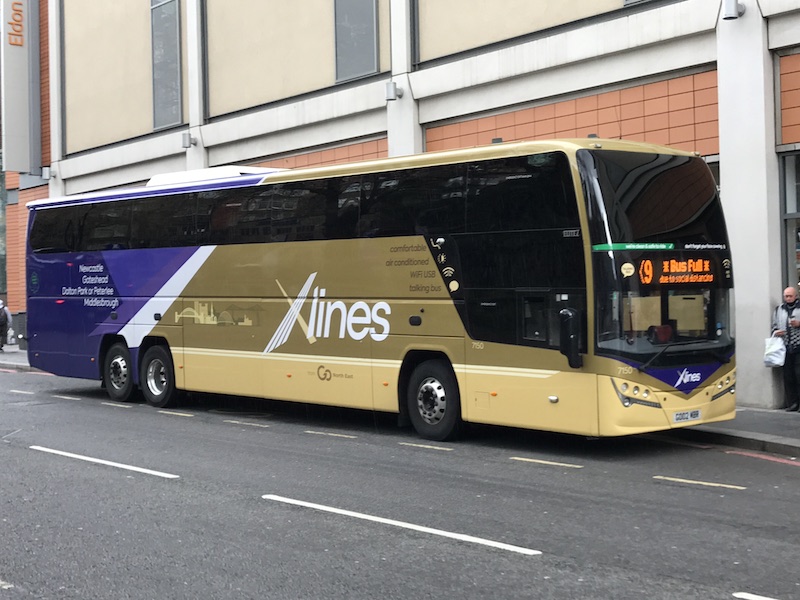 I last took a ride on Go North East’s X-lines branded inter-urban bus routes back in November 2020, trying out some of the many new double decks delivered to the Company last year raising the profile of this useful route network.

At that time the coaches made spare after Oxford Bus withdrew its X90 Oxford to London service were still undergoing their makeover at the refurbishment centre called Hants & Dorset Trim, part of Go South Coast within the Go-Ahead Group.

During Lockdown 3 in February news came through they’d finally all been suitably tarted up ready for a new life in the north east so yesterday seemed a good time to take a ride and see whether the coaches are more suited to their new home on routes X9 and X10 between Newcastle and Middlesbrough than I’d found with their use on Carousel Buses’ Chiltern Hundreds branded route between High Wycombe and Heathrow Airport.

Whereas Carousel’s route 102 to HeathrowAirport (cut back to Uxbridge in March 2020 when Lockdown 1 began) acts as a traditional local bus route carrying passengers of all ages with shopping, buggies and other paraphernalia with boarding and alighting at many bus stops along the route, Go North East’s X9/X10 is very much characterised by having few intermediate stops and a lot of end-to-end journeys.

This is particularly pertinent because of the steep step arrangements for passengers accessing seats on the raised-above-the-side-locker-space ‘inter’ deck, making them unsuitable for a route with frequent stops. They’re far from ideal for anyone with mobility difficulties.

There are two seats behind the driver and space for a wheelchair alongside the cab but that’s not sufficient or practical for a mass transport facility such a bus.

Following the report of my journey with Carousel at the end of 2019, I was intrigued to see how the situation would compare with Go North East’s use of similar coaches on the X9/X10. Would these routes be better suited and give the coaches a useful second life?

The first thing that strikes you is their splendid livery. The purples contrast superbly with the gold, cream and white. It’s another Best Impressions masterpiece.

The next thing is those stairs. They really are steep looking.

However once negotiated, if able bodied, the ‘upstairs’ does provide an aura of luxury with a smidgeon of superiority being up at a higher level on a luxury looking coach sitting in comfortable seats with usb and Wi-fi on hand as well as audio visual next stop announcements and other information and promotional messages on a screen.

The very front triple and single seat arrangement to your left at the top of the stairs adds to a sense of achievement if you’re lucky enough to bag one. It’s a bit like boarding an aircraft and turning left for Business Class seating (I’d imagine) instead of right for Economy Class. What a thrill, especially the commanding view the seats offer of the road ahead and there’s ample leg room too. FLiXBUS would charge an extra £2.49 (at least) for the privilege, as would EasyJet and the like.

The seats are ideal for spotting coaches heading in the other direction and see how impressively they stand out as they pass by.

Go North East took eight of the Volvo B11R Plaxton Elite coaches off Oxford’s hands all with Euro 6 engines but diverted some pre-delivered brand new double decks south as part of the deal. An arrangement which suited both companies.

As the peak vehicle requirement for the X9/X10 is also eight vehicles Go North East are using some Caetano Lavante coaches formerly used on National Express diagrams as back up; indeed one of these in plain white livery was in service yesterday. Others are in ‘heritage’ liveries remembering former companies associated with the north east: OK Travel, Voyager, Charterplan and Armstrong Galley.

Luckily having seen that white liveried coach depart on the 12:02 from Newcastle it was good to see a smart looking Caetano pull up for my intended journey, the following one, at 12:32 – I’m indebted to managing director Martijn Gilbert for sprinkling his magic dust on the vehicle allocation for me yesterday!

Half a dozen passengers boarded ahead of me giving me time to have a chat with the very friendly driver who was pleased with his ‘new’ stead finding it a great vehicle to drive.

He’d had a busy trip into Newcastle needing to display the ‘Bus Full’ sign which is encouraging news that passengers are returning to bus travel and vindicates the decision to revert to the half hourly frequency (hourly on each of the X9 and X10) once Lockdown restrictions eased last month. Let’s hope it won’t be too long before social distancing limitations can be eased and buses and coaches can once again revert to more practical capacity levels, and in the meantime I know from Martijn, that the Company are keeping a close eye on this situation, running extra vehicles where they can.

Coaches on routes X9/X10 depart from St Andrew’s Church just round the corner from Eldon Square bus station as their tri-axle extra length means they’re too long to fit into the bus station. Perhaps not so convenient for passengers but much better for bus photographers.

With everyone on board we set off on time at 12:32 and were soon crossing the High Level Bridge heading towards our first principal stop at Gateshead Interchange.

The X9 and X10 both then head south via Heworth, but after that the X9 serves Peterlee and Billingham while the X10 sees Dalton Park and Stockton.

Much of the eighty-three minute journey time is spent on dual carriageway A roads and there are effectively only a handful of intermediate bus stops along the route, the main ones being Gateshead Interchange, Heworth Interchange, Peterlee bus station and central Billingham on the X9.

We did a bit of business at Peterlee, but the only other pick ups were at Billingham Green including a wheelchair using passenger and his carer who enquired whether they could board.

Our driver was positive and welcoming but it turned out the passenger could board without using the wheelchair and sat in the double seat behind the driver while his wheelchair was folded up and stowed in the side locker. It was all handled very ably and smoothly.

We headed off and were soon arriving on time into Middlesbrough’s bus station at 13:55.

It was an impressive ride and I reckon these coaches have found a very suitable home on the X9 and X10. It’s a very sensible move north for this batch of coaches. They provide a great alternative to the train which offers a similar journey time to the X9 and X10 but only runs hourly.

I understand some of Oxford’s surplus coaches have been returned off lease but there are still some in need of a good home, as I’m not convinced it makes sense to use them on Carousel’s route 102. Before Covid hit, Oxford Bus/Carousel had plans for a High Wycombe via Maidenhead to Heathrow Airport service, presumably with funding from the Airport, and which might have been another suitable route but that’s not looking a likely venture for the foreseeable future.

There must be another strong inter-urban route with lots of end to end journeys and no much intermediate traffic out there. Thinking caps on.

7 thoughts on “Tyneside to Teesside”