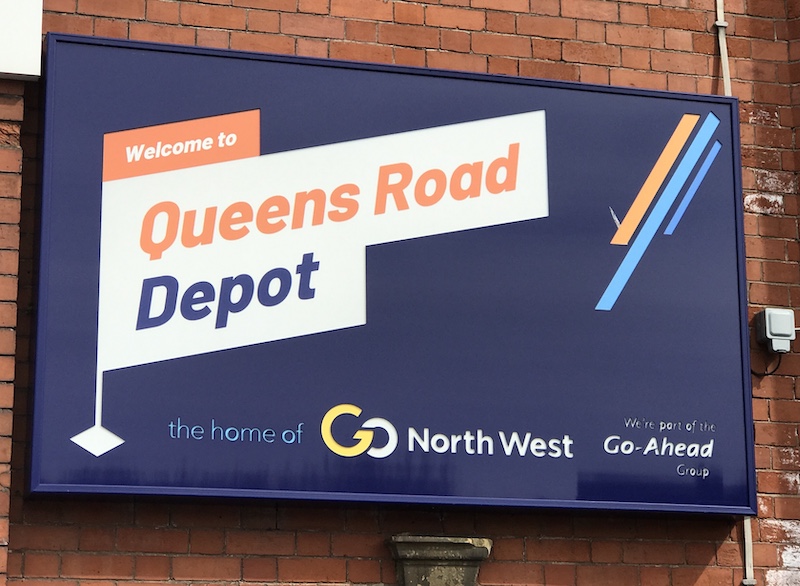 It’s uncertain times for buses in Greater Manchester. Assuming Stagecoach and Rotala’s legal challenge against the Mayor and Combined Authorities’ decision to introduce franchising fails, the next few years are set to bring many changes, not least the current variety of liveries replaced by one unified brand.

If TfGM’s promotional media is anything to go by, this will be a yellow livery similar to that used on Metrolink trams and the city centre free bus shuttles – described by one renowned design expert recently as “heavily diluted cold school custard”.

It’ll be a shame to see two bright new brands recently introduced by Go North West disappear so soon after their initial impact including Middleton’s Minis being used on recently won tenders for routes 129 and 415….

But not everyone in Manchester is wanting to embrace change thinking what’s always been, always will be.

Unite the Union’s “all out strike” at Go North West is a classic case of not wanting to accept the inevitability of change.

Centred on the Company’s only bus depot at Manchester’s Queens Road the strike is now entering its ninth week. It’s looking no closer to resolution. Such is the entrenched position taken by the union even ACAS have given up trying to resolve the dispute.

Things took a disturbing turn this week with disgraceful acts of intimidation against drivers who’ve chosen to continue working. Unite deny any involvement blaming “activists” for daubing a front door with the word ‘scab’ and gloss paint poured over a car. 38 other incidents recorded by the company have included unpleasant verbal harassment and threats to a working driver’s wife, rocks thrown at buses and nails scattered at a depot. It’s getting nasty. And it’s all completely unnecessary.

Despite the industrial action Go North West have continued to operate some 80% of services in the city with around 130 drivers ignoring the strike and continuing to work as well as assistance from half a dozen or so other operators taking over some of GNW’s routes. It’s great to see such amazing efforts to minimise inconvenience for passengers.

Go North West’s highly capable and much respected managing director Nigel Featham has gone to great lengths to communicate the background to the issues.

It’s no exaggeration to say the dispute is over the commercial survival of the depot the Go Ahead Group purchased from First Group in 2019. “The depot is losing nearly £2 million annually due to outdated working practices” Nigel has explained, adding that proposals to turn the company round involve “no job cuts, guaranteed pay increases this year and next, and a £5,000 lump sum payment to all 480 bus drivers”. Following months of negotiations with the union, all drivers have signed new contracts of employment which, following a 12 week notice period given to every driver, irrespective of whether they were only entitled to a shorter entitlement, become legally effective from 9th May.

There’s no going back from that. The contracts are signed.

But Unite representatives are not happy and wish to prolong the strike, presumably thinking the company will back down and reinstate the old contracts. The union has christened the dispute as “fire and rehire” characterising Go North West as a profit hungry corporate exploiting its workforce to line the pockets of shareholders. It makes for a great headline for a union in the midst of an election for a new General Secretary but is far removed from reality.

Go-Ahead are the saviours of the Queens Road bus garage, not the villains. It paid just over £11 million to buy the operation two years ago and will have every intention of making it a success which will include securing jobs and paying decent wage levels – as all Go-Ahead companies do – and working constructively with trade unions. But it must be obvious to everyone involved, and you don’t have to be a chartered accountant to realise this, losses of £2 million each year are simply unsustainable.

Change must come, whether the union likes that idea or not. Things can’t continue as they did, year after loss making year, under First – and indeed, they haven’t. First decided it was so unsustainable it had to get out and quit.

Many of us with long industry experience never understood how First Bus could be making such losses running buses across north Manchester where passenger carryings and revenue are among the best in the country. Something just didn’t add up.

Now we know what. The operation is saddled with huge operating costs arising from outdated working practices. Most bus companies tackled such issues back in the late 1980s. GM Buses North then First Bus didn’t and both decided to quit rather than tackle the situation which has given the union and staff the impression slack working conditions are an acceptable way of bus operation in the twenty-first century. The brutal fact is union members have been on borrowed time. Slack scheduling and inefficient rota compilation together with bizarre outdated restrictive working practices ultimately have to be tackled. A £2 million loss each year can’t continue.

It’s not that Go-Ahead are a mean nasty employer. Take a look at its track record elsewhere in the country. Unite and its members at Queens Road have had it unrealistically far too cushy for far too long. The day of reckoning has come.

I highlighted one of the anachronisms in a recent blog, namely every duty being paid an extra four minutes as “blind turning time” even though no blinds have to be manually turned. Other practices include unnecessarily large amounts of rostered spare duties at non-productive times so in practice they can’t be used and a bizarre practice where drivers can insist on finishing their duties precisely on the scheduled time, meaning if a bus is running late, passengers are turned off the bus and it’s run out of service to the garage to ensure duties end on time. Other inefficiencies include duties with walking time allowances where they’re not needed.

One reason there’s no immediate sign of the dispute coming to an end is Unite the Union are paying striking drivers a cash sum of £350 a week meaning many are earning what they’d normally receive in wages after tax and they don’t have to work for it. This is costing Unite £112,000 a week (for 350 striking drivers) so the eight week bill is now approaching £1 million. With another ballot in the pipeline to extend the strike for up to a further 12 weeks when the current mandate runs out next month, that could bring the total spend to well over £2.5 million in strike pay for that duration – which interestingly is of a similar magnitude to the Company’s annual loss. Now I know Unite are a well resourced union, but I wonder whether bus driving members working on much less hourly rates all over the country will think that’s a good use of their weekly contributions to the union. Something they might consider in the upcoming General Secretary election perhaps.

I took a ride up to Manchester today to have a look at what’s happening on the ground.

It’s all quiet on Queens Road as Go North West have effectively now closed their garage and are using parking facilities elsewhere in the city to minimise flash points.

Much of the GNW fleet is being hired out to other operators who’ve taken over the routes.

There are some tell tale signs all is not as it seems, such as an old Almex manual ticket machine being spotted (see above), but passengers would be hard pressed to realise anything was different on Go North West branded buses.

The ‘orbits’ branded buses are appearing on other routes driven by drivers from other bus and coach companies. One I travelled on this morning driven by a driver from Red Rose Travel even had its leaflet racks full with explanatory leaflets about the strike and how the company are “keeping you moving”.

I got chatting to the driver and while he prefers coach work he was delighted to be actively employed having spent much of last year on furlough.

Some routes are being run by other operators using their own vehicles including, for example, Widnes Coaches on route 33 …

…. and perhaps most bizarre of all orbits branded route 53 is in the temporary hands of Edwards Coaches using its fleet of former National Express coaches.

Not really ideal for local bus work but a touch of luxury for Cheetham Hill and Sale passengers!

Today’s travels set me thinking the current situation gives rise to a funny merry go round of money. Passengers are back paying normal fares on most routes (the initial £1 then £2 flat fare arrangement has ended). That income together with concessionary fares reimbursement and the DfT paying Covid Bus Services Support Grant to Go North West means revenue is maintained. Small coach type companies which have been devoid of work for most of 2020 are earning some useful income from Go North West – at probably less cost to GNW than it was spending on paying its own drivers and using its own fuel. TfGM are happy that services are being maintained including tendered bus routes (for which they’ll be paying GNW as normal) and indeed might be delighted some small companies are getting a taste of running buses in Manchester, bearing in mind upcoming franchising opportunities. Drivers working are being paid normally and those striking are receiving the equivalent pay from Unite the Union for not working, the only shortfall being pension contributions, but I doubt many are worried about that.

As a consequence of all that, I reckon Go North West might even be financially better off with the strike than they were in pre-strike times. Which brings me back to Unite the Union. They seem content to use their funds to bankroll 350 of their members not to work. But that, it seems to me, is more of an unsustainable position than Go North West’s finances were in eight weeks ago. The unsustainable finances have shifted from GNW to Unite the Union.