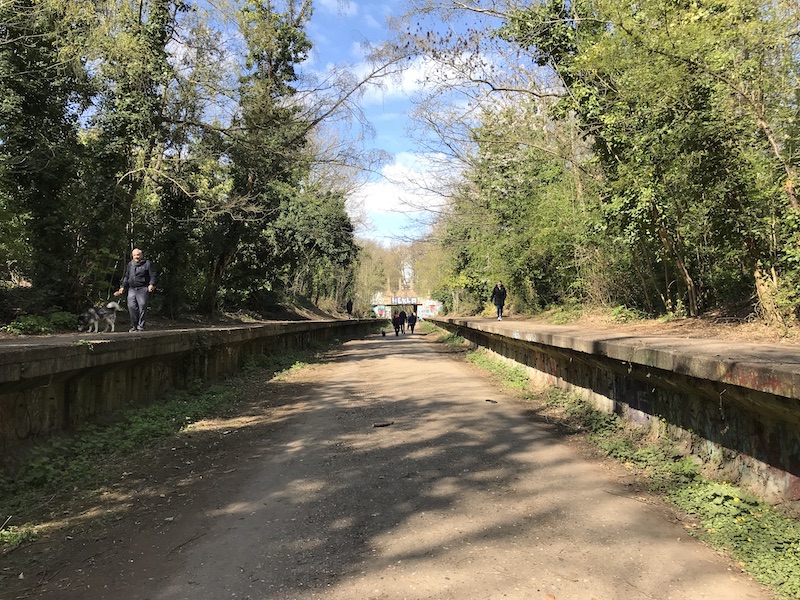 Not by one of my favourite London bus routes, the W3 (famous for its breathtaking top deck views across London as buses pass in front of Ally Pally), but on foot along what’s now called the Parkland Walk following the abandoned rail line that became known as the Northern Heights. It’s part of the ‘Capital Ring’ walk.

There are plenty of fascinating YouTube videos about abandoned railways – even a dedicated channel – and the brilliant rail vlogger, Geoff Marshall is currently uploading each week his series of updated short films ‘London’s Lost Railways’ in which he tracks the tracks of the Capital’s long forgotten railways. You can check them out here (from number 1 in the ongoing series of thirteen).

It had been a few years since I’d walked the Finsbury Park to Alexandra Palace line. It was six years ago in 2015 in the company of renowned expert on the Northern Heights, Jim Blake. Jim used to provide a fascinating guided walk imparting his encyclopaedic knowledge of the line’s history and his deeply held conviction the line should never have been abandoned in 1954 when it closed with its part conversion to become a useful addition to London Underground’s Northern Line bringing Tube trains to Muswell Hill, Crouch End and Stroud Green. Ever since the line’s closure residents from these parts have had to rely on the busy and frequent W7 bus route to provide their link to the nearest Underground and National Rail station at Finsbury Park instead.

Jim wrote a book, ‘Northern Wastes’, on the subject in 1993 highlighting the scandal of a wasted £3 million (£75 million in today’s money) expenditure on work already undertaken to electrify the line and bring it within the Underground network as well as infrastructure works at Finsbury Park station to accommodate an extra platform before the whole scheme was abandoned.

To add to the curiosity surrounding the line, the line’s high level station at Highgate, sited above the deep level Northern line station on the High Barnet branch, is still in place.

In 2017 London Transport Museum began site visits to this fascinating site as part of its Hidden London programme.

The full Parkland Walk is just over four miles from Finsbury Park to Alexandra Palace, mostly on a gentle upward incline in the northern direction. To access the walk, the first section takes you through Finsbury Park itself where there’s an entrance immediately opposite the bus station in Station Place outside the National Rail station.

It’s here that some of the infrastructure work was carried out in the late 1930s and for many years you could see rusting iron girders erected just before the Second World War to support the additional platforms to the east of Finsbury Park station which would have enabled the trains to serve the station above ground.

You can imagine where that extra platform would have appeared to the right of the part canopy over the bus station in the above photograph.

The track from the Alexandra Palace line crossed the East Coast Main Line utilising a flyover which took the line on the eastern most track down towards Finsbury Park. The flyover has long been dismantled but you can still see where it would have joined the main line.

After a short walk through Finsbury Park you soon arrive at a footbridge over the main railway line taking you to the start of Parkland Walk along the abandoned railway line as far as Highgate.

It’s a lovely walk up a gentle incline all the way. It’s so quiet you really have no idea you’re passing through densely populated busy London suburbs until you occasionally pass over bridges where the railway crossed over Stroud Green and Crouch End’s road network.

The best part of the walk is discovering the still in situ platforms of Crouch End station although sadly traces of any station buildings on them have long since disappeared.

Also easily spotted in places at the side of the Walk is evidence of the wasted work carried out to prepare the line for electrification, not least the many concrete posts which were erected the whole way along the trackside to take the power cables as part of that £3 million preparation for electrification.

This section of Parkland Walk ends after about 3 miles in Highgate where trains used to pass through tunnels under the road called Shepherds Hill before reaching Highgate high level station.

These tunnels are now a bat sanctuary so are closed to the public and instead walkers need to use Archway Road passing the steps down to Highgate Underground station to rejoin the second part of the walk at Cranley Gardens off Muswell Hill Road.

If you’re able to visit Highgate high level station you can see where the tunnels came out just before the station’s platforms (as below).

The best way to reach the section of abandoned track at Cranley Gardens is taking the western most path through Highgate Wood.

If you bear off to its southern and western boundaries you get some great views of the tracks now used as sidings for the Northern Line south of East Finchley, but were once the tracks of the abandoned railway continuing towards Alexandra Palace.

There’s also an entrance/exit to another blocked off tunnel to admire.

The rail tracks used to curve round to the north east, just as the adjacent path does through Highgate Wood….

…. bringing you out by Cranley Gardens where you can rejoin the trackbed for the final section of the former line that’s available to walk along to the site of the former Muswell Hill station on the road called Muswell Hill.

The trackbed walk ends when you reach Muswell Hill, but you can continue through Alexandra Park to the Palace itself and explore the delightful grounds with their magnificent views.

Round the back of the Palace you can find the original terminal station for the railway which was restored and converted into a community centre in the 1980s.

Watch out for Geoff’s updated London’s Lost Railway video featuring the Parkland Walk along the former Finsbury Park and Alexandra Palace line which will be uploaded in the next few weeks, then take a walk yourself combined with a lovely ride back to Finsbury Park on the W3.