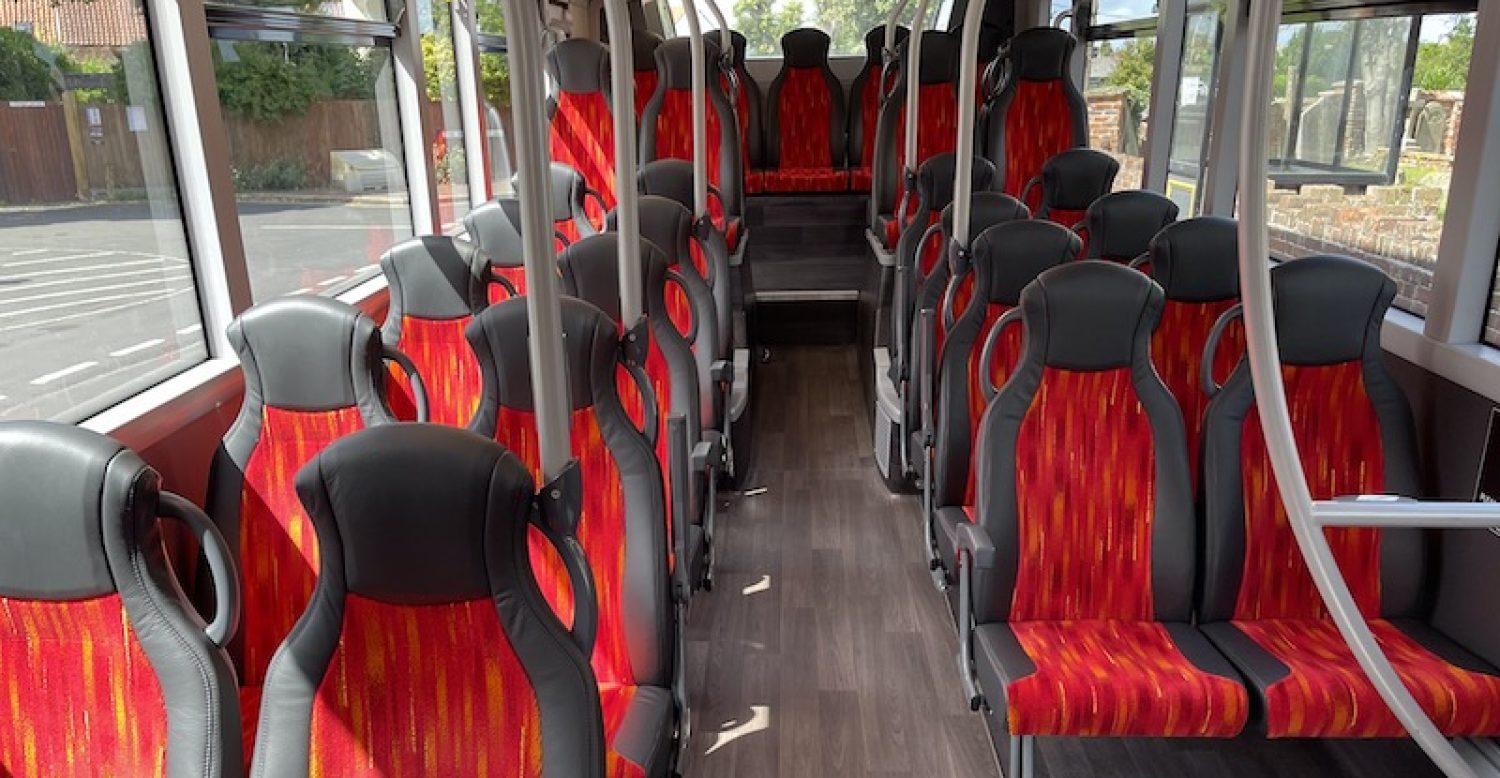 Pre Covid, Leicestershire County Council was pursuing a review of tendered bus routes across the county with a view to achieving £400,000 saving on its annual £2.4 million subsidy budget. This involved an area by area assessment of each route with public consultation workshops to discuss proposals.

One of these was in Coalville in October 2019 when a proposal to merge two rural routes was discussed: route 120 Leicester to Coalville and route 155 Coalville to Castle Donington.

Neither of these two-hourly frequency routes scored well on the County Council’s service review score card (cost per passenger/access to other services/journey purpose were all scored) with route 120 showing a ‘marginal’ case for continued support scoring 22 out of 35 while route 155 scored just 8 out of 35 showing a weak case for support.

The upshot was a newly numbered route 125 combining the 120 and 155 and thereby saving a bus with a slimmed down timetable comprising four journeys a day between Leicester and Coalville, two of which continue to Castle Donington. Route 155’s diversion to serve East Midlands Airport was withdrawn.

The new timetable was introduced on 24th February.

A month later in March came lockdown and six months on is still continuing, to an extent, with local restrictions in Leicester, so it wasn’t surprising to find the new route sparsely loaded when I took a ride at lunchtime earlier today.

My friend Simon Mathieson (Arriva Midlands’ Area Managing Director) alerted me to the extended route pointing out it’s now an attractive rural route with an end to end journey time approaching two hours so just the kind of route he knows I relish and guessed it needed my custom to appreciate what it has to offer.

I took the 12:00 journey from Leicester to Castle Donington where the scheduled arrival time is 13:57.

However, as you can see from the timetable, this includes a frustrating twenty minute pause in Coalville between a 12:55 arrival and 13:15 departure which pretty much puts a dampener on the convenience of making a through journey.

I subsequently found out this journey was retimed to add this long mid journey break following the public consultation last October to meet requests for two and a quarter hours shopping time in Coalville (off the 10:57 arrival from Castle Donington) rather than the originally planned two hours for shopping, with the journey originally timed to continue north at 13:00.

In the event no one boarded in Coalville to head back to Castle Donington this lunch time and the driver and I just sat out the twenty minutes. Although it did give me time to take a few photographs by Coalville’s magnificent clock tower.

And admire the rather impressive bus shelter displays with comprehensive timetable information and clear promotion of Arriva’s ticket offers.

I can’t imagine why shoppers need so much time to buy what’s needed in Coalville. It’s hardly a major shopping town; but that’s public consultation for you.

In the event we arrived slightly later than the 12:55 scheduled arrival in Coalville as we called into Roberts Travel Group’s (the operator of the 125) extensive garage and yard on the southern fringe of Coalville for a driver changeover.

I didn’t realise how extensive Roberts Travel Group’s fleet is, and sadly much of it was standing idle after the devastating impact of the pandemic during the summer. At least route 125 is bringing in some income along with school contracts.

Arriva Midlands also base some buses with Roberts as a Coalville outstation and It was interesting to catch a glimpse of three of Arriva’s new Mercedes coaches bound for Green Line sitting in the yard.

Back to my journey earlier today and we left Leicester on time at 12:00 with no one else on board picking up one passenger in the rather nice looking largish village of Anstey (makred with the right hand arrow on the map below) on the north western outskirts of Leicester, eighteen minutes into the journey.

She travelled to an extensive retirement home complex 13 minutes further along the route called Markfield Court on the edge of another largish village called Markfield (marked with the left hand arrow on the map above). This involves making a double run off the route, but proved worthwhile for that passenger.

The only other passenger we encountered on the entire journey got on as we approached Coalville and just travelled the short distance into the town centre, a journey which could have been undertaken on Arriva’s half hourly Coalville- Markfield-Leicester service.

Otherwise it was just me and the driver.

As well as passing through some decent East Midlands villages the route also passes through lovely Leicestershire countryside, especially north of Coalville where it’s not surprising passengers are few in number as the settlements served are sparse.

I can see why the former route 155 scored a weak case for continuation.

Not even serving the famous racetrack on the approach into Castle Donington helped.

I very much enjoyed my ride on the newly extended route 125. I know it’s not normal times but two short distance travelling passenger journeys on an almost two-hour journey doesn’t bode well. It won’t score much in the next review.

I reckon there might be another public consultation in Coalville coming up if things don’t improve.

Which will be a great shame.

PS: At Castle Donington I switched to take a ride on the trentbarton Skylink route for the short trip to Long Eaton station and how nice to immediately be struck by the presentation of a true quality product. And it got quite busy too as the route serves huge distribution warehouses on its way to Long Eaton and on to Nottingham.

I used to run a bus company but in retirement enjoy Britain’s splendid scenic delights travelling by bus and train, and commenting along the way.

8 thoughts on “It’s less in Leics” Leave a comment ›